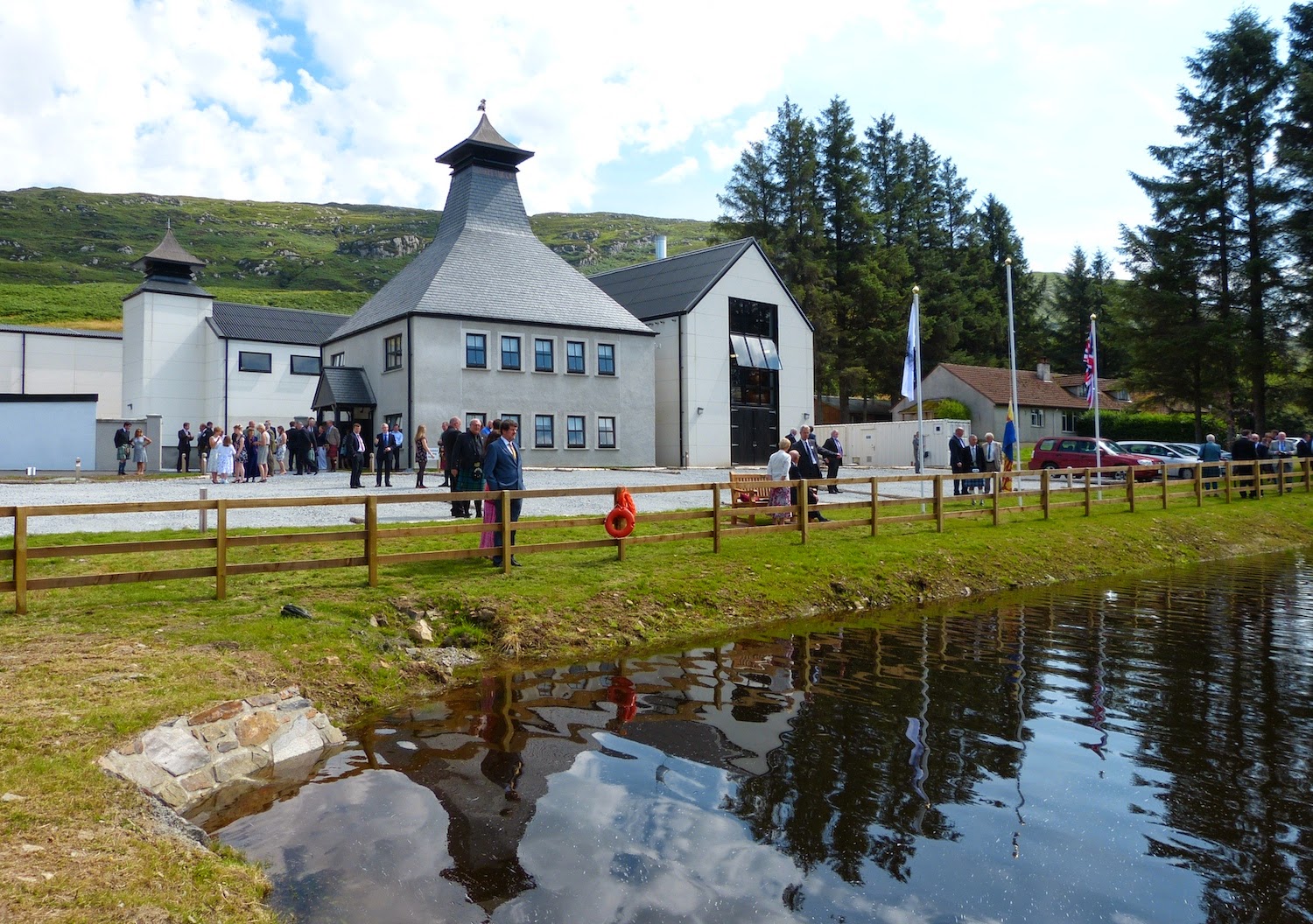 Big events don't happen often on West Ardnamurchan but, given the unenviable choice of the annual Sports Day and Show or attendance at the formal opening by HRH the Princess Royal of the new Adelphi whisky distillery at Glenbeg, along with the opportunity to photograph the whole event, the Diary - reluctantly - opted for Glenbeg.

The organisers couldn't have asked for a better day, with somewhere over seventy people attending the opening of a major development for this peninsula.  The distillery is unusual in that it is powered by renewables - wood chip boilers, and electricity produced by hydro power and wind turbines.  More, the by-products from the process, such as the draff and the pot ale, will go to local agricultural use. 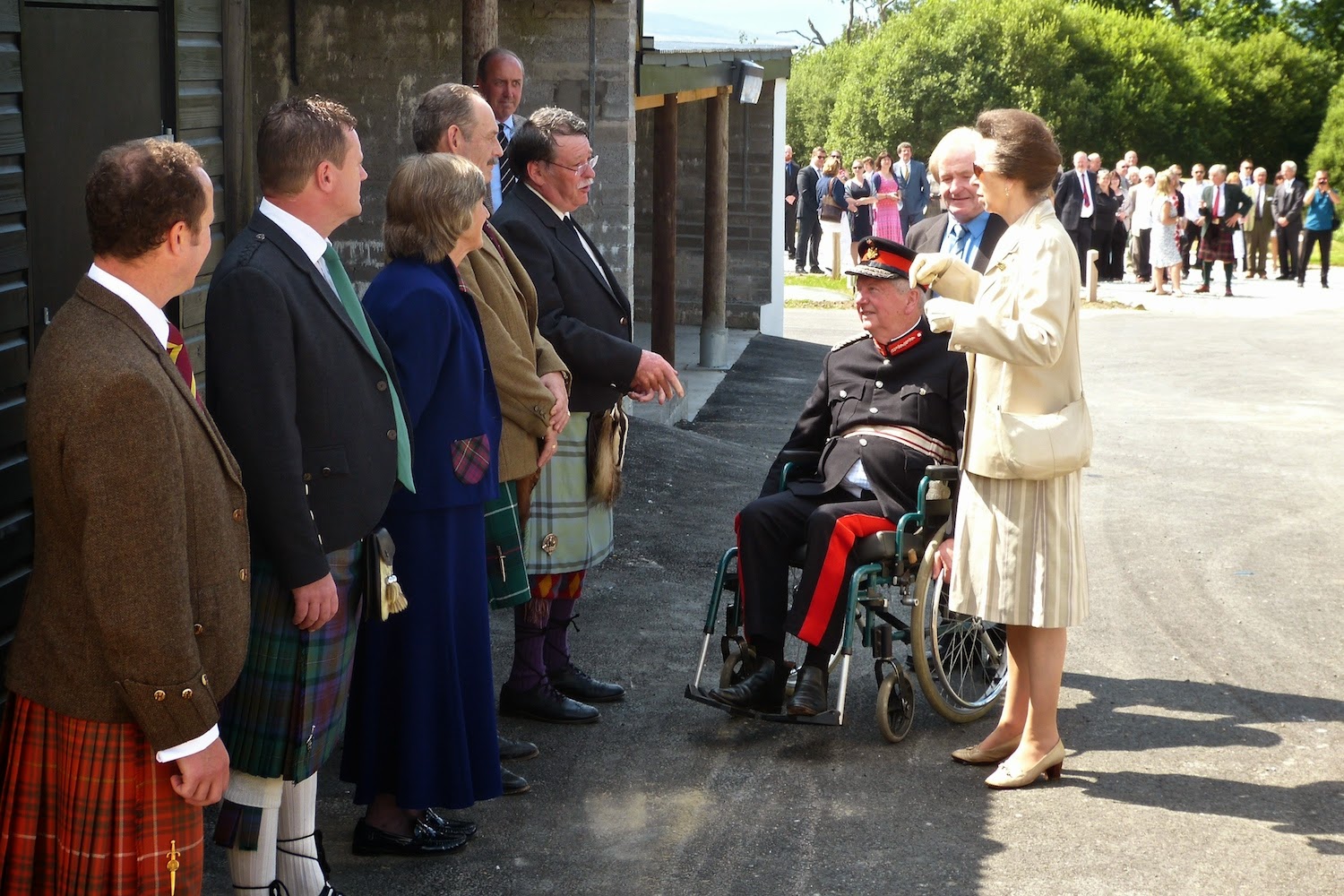 On her arrival, the princess was introduced by the Lord Lieutenant, Donald Angus Cameron, 27th Lochiel, to Keith Falconer, Donald Houston and Liz MacDonald of Aldephi, Graeme Bowie, the distillery manager, and Alex Bruce, Sales & Marketing,  The group then began a tour of the distillery which included.... 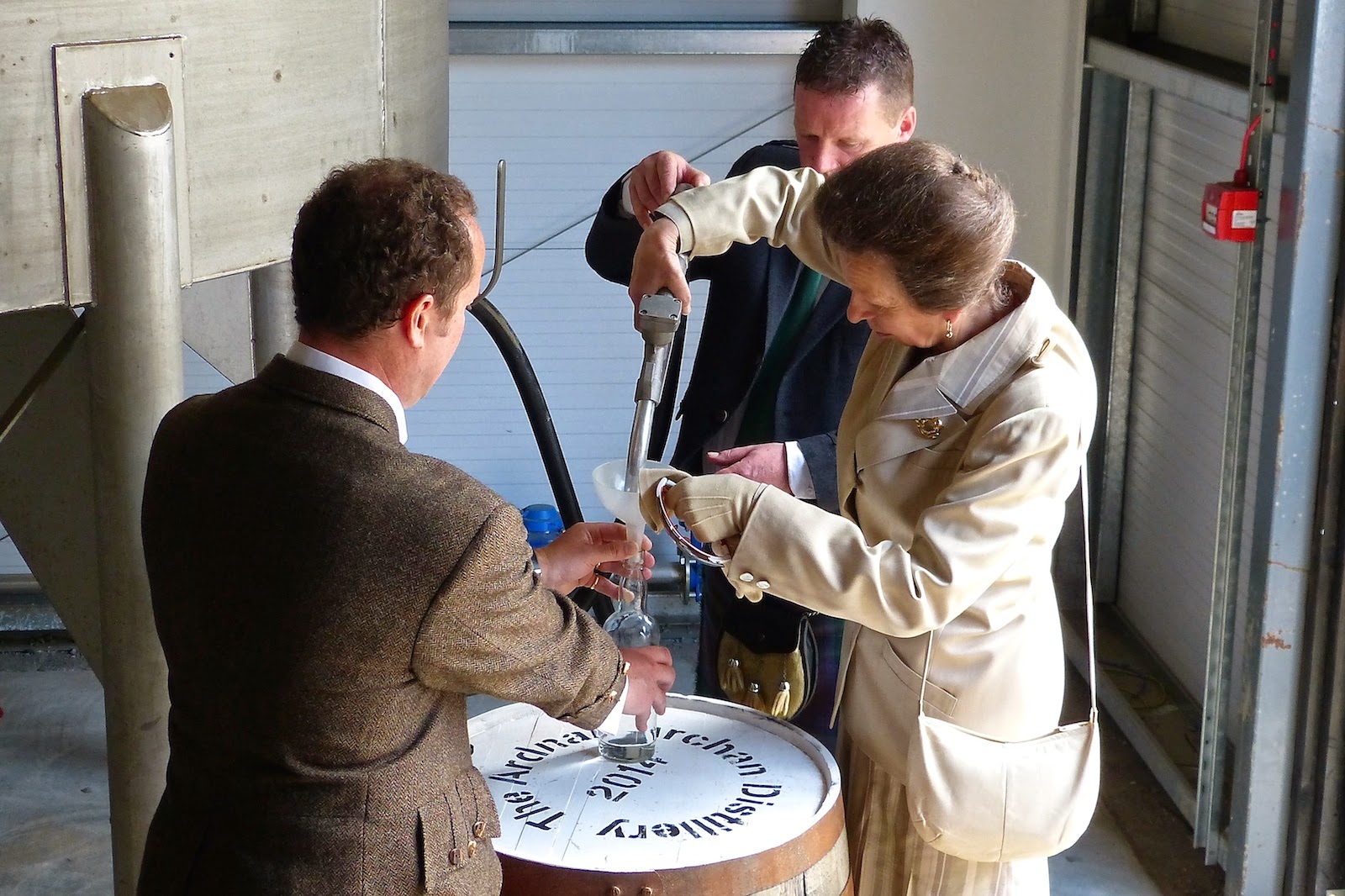 ....an opportunity for the princess to draw the first bottle of spirit, the distillery having been working now for some weeks.  The liquid is 70% proof but colourless and lacking in character.  It will have to spend ten years in barrels before it becomes fit for sale; there are many of us who are looking forward to that moment, particularly as the community has a small share in the distillery. 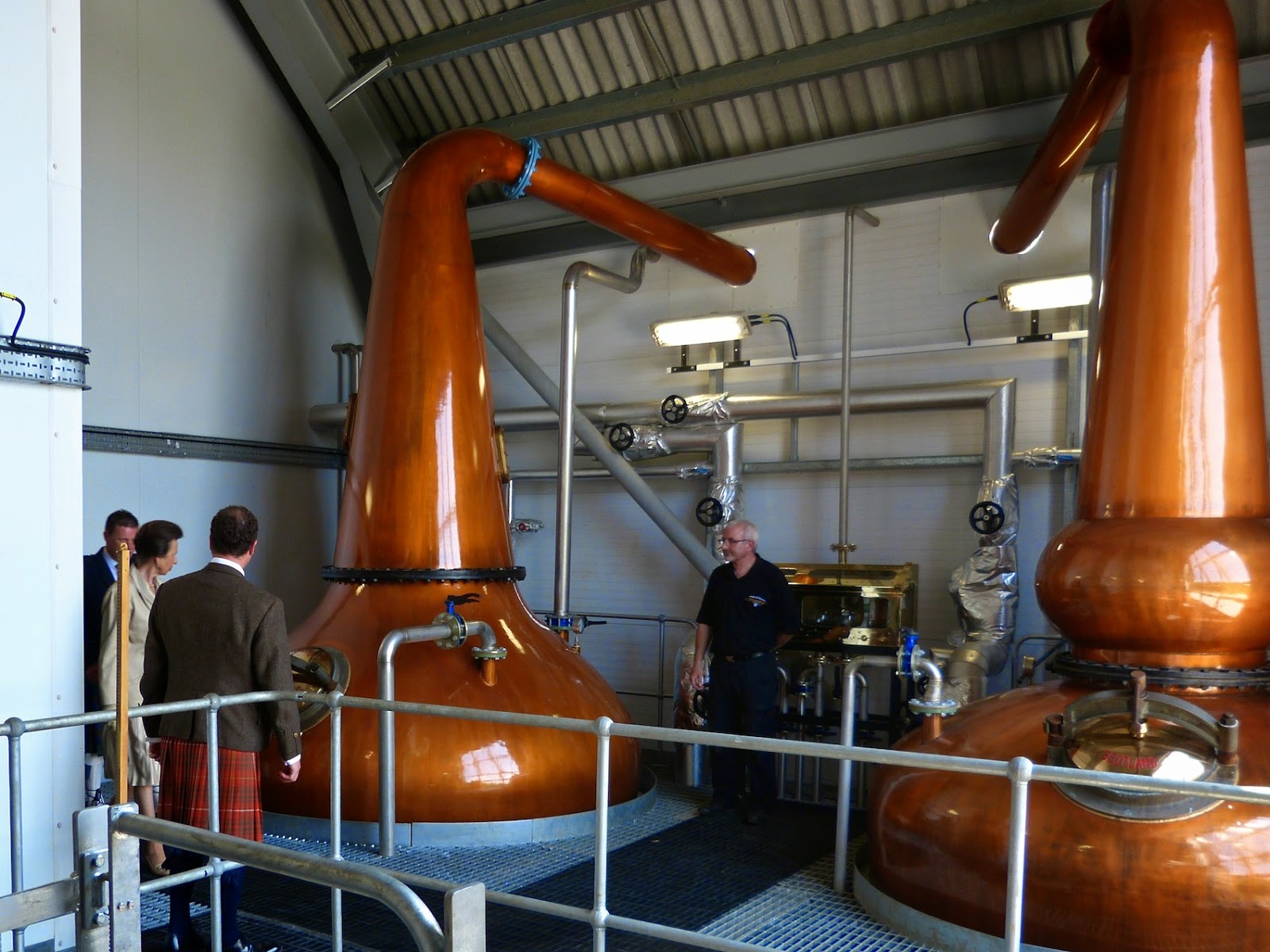 A promise made to the community when the distillery was planned was that it would offer up to ten jobs to local people.  The promise has been kept, and one such job has gone to ex-bus driver Gordon MacKenzie.  The only down-side of this part of the tour was that the temperature in the room was fierce as distillation was in process: not that this prevented the princess from spending quite some time listening to Gordon' explanation of what was going on. 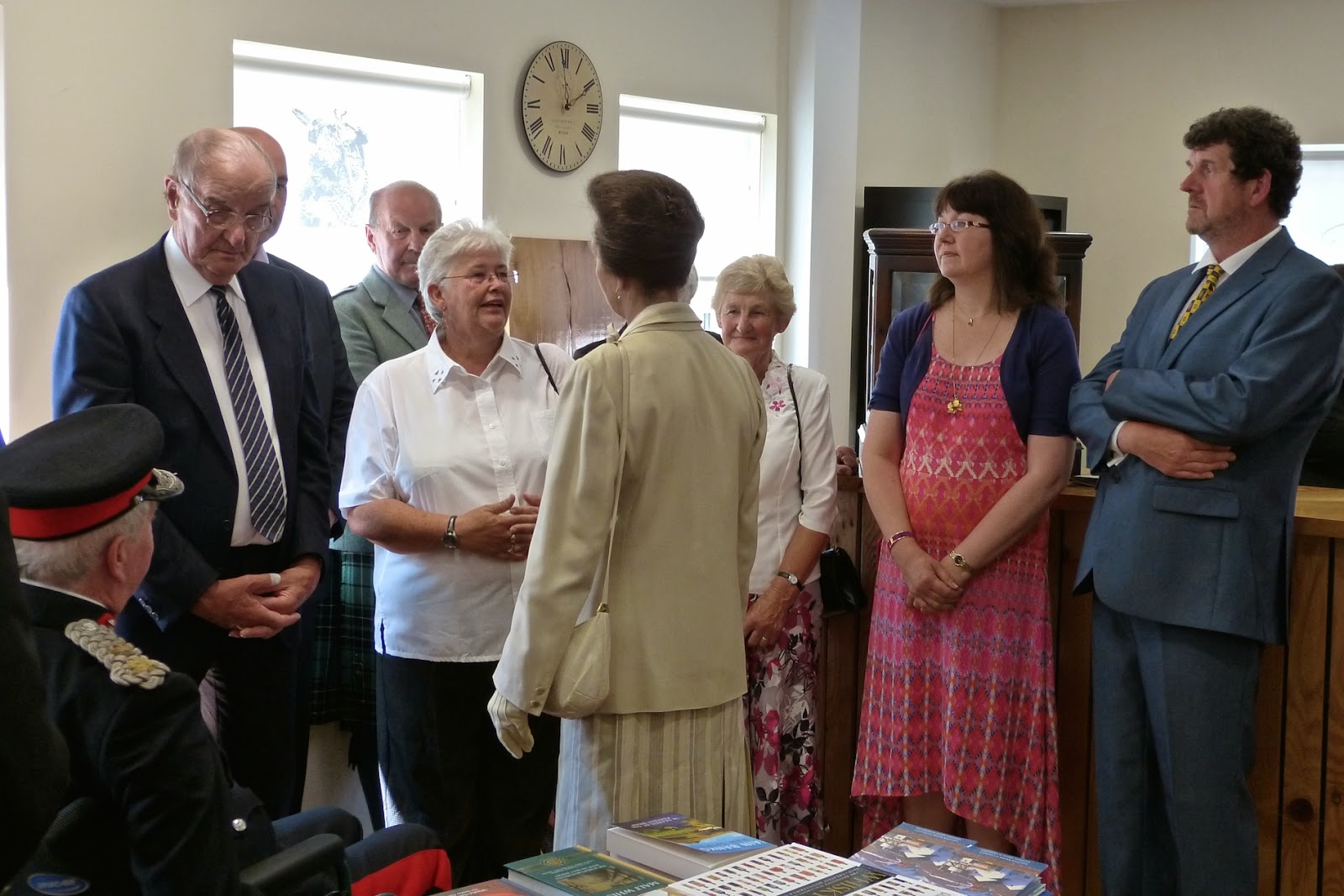 The princess then met fifty people, varying from those who have been closely involved in the setting up and commissioning of the distillery through to local businessmen and residents from the peninsula, through to.... 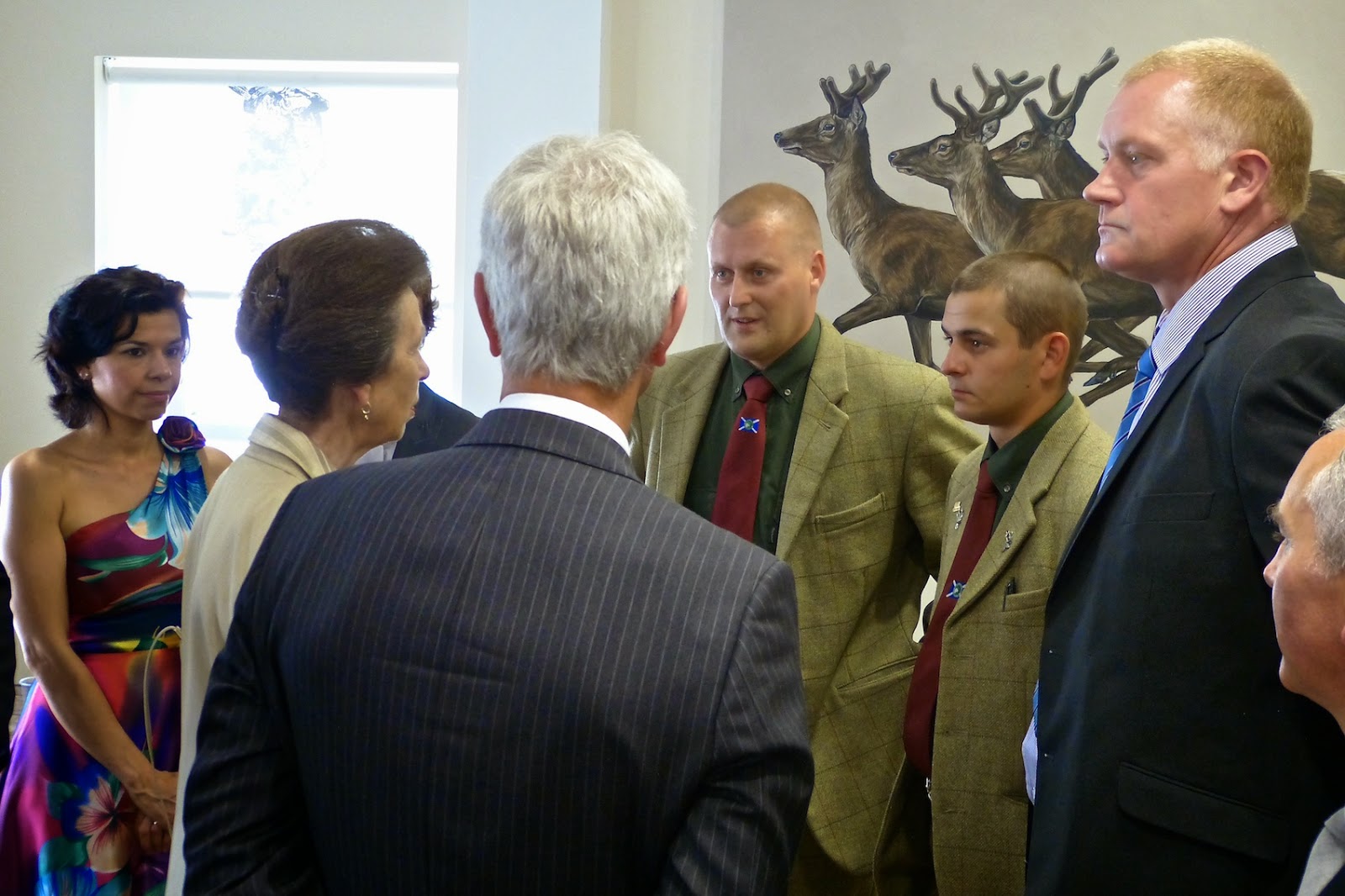 ....employees from Ardnamurchan Estate and at Glenborrodale Castle.  The attention to detail of the organisers can be seen in this picture, where Ardnamurchan Estate's two gamekeepers have been neatly arranged under a picture of running deer.

HRH impressed us.  She spoke to everyone, showed interest in everything, and has a wonderful knack of putting people at ease and drawing them out. 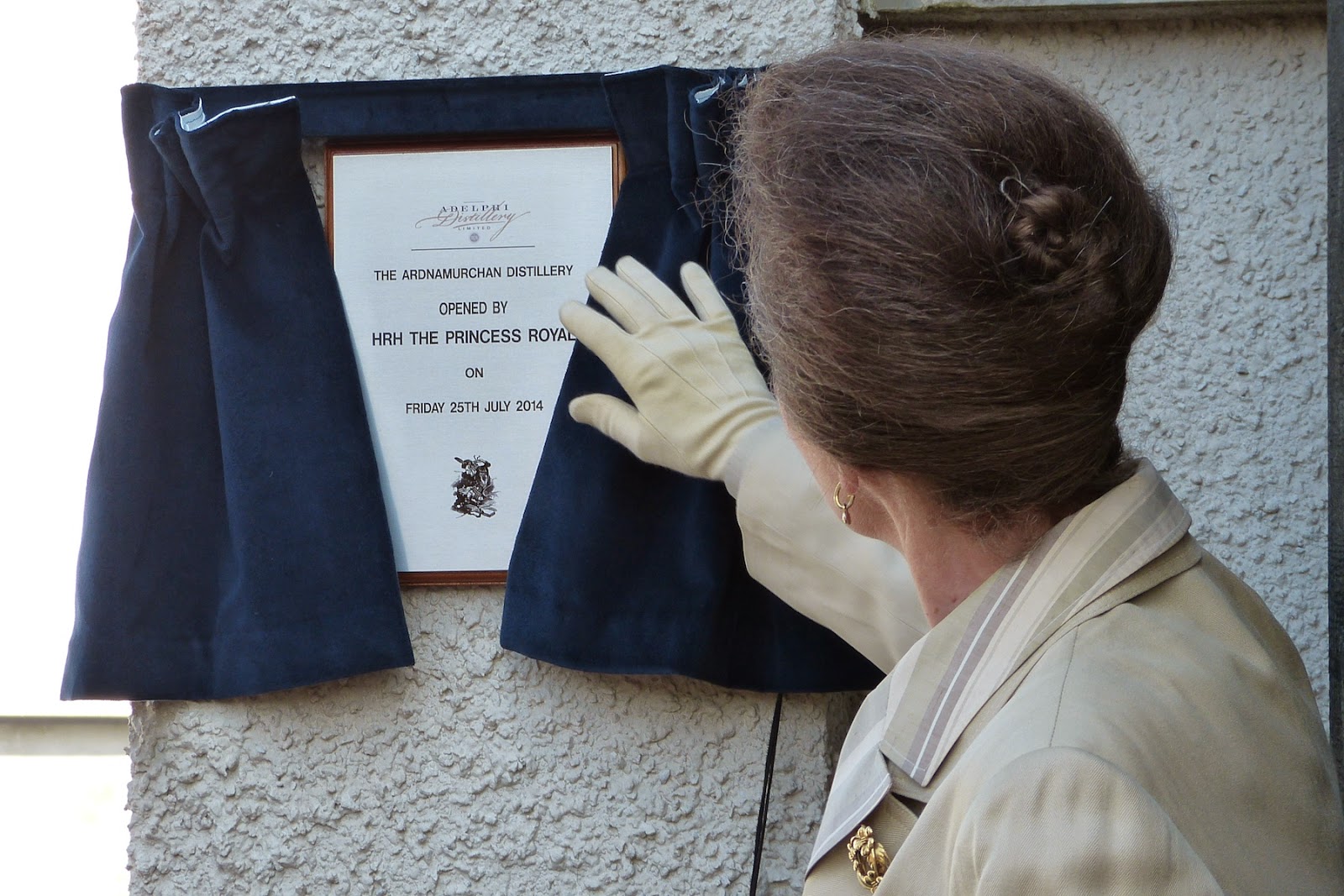 Princess Anne completed the opening ceremonies by signing the visitors' book and unveiling a plaque by the entrance to the visitors centre, which is now open.  When she had left, the guests were served a superb lunch provided by Glenborrodale Castle, washed down with champagne.
Posted by Jon at 20:22