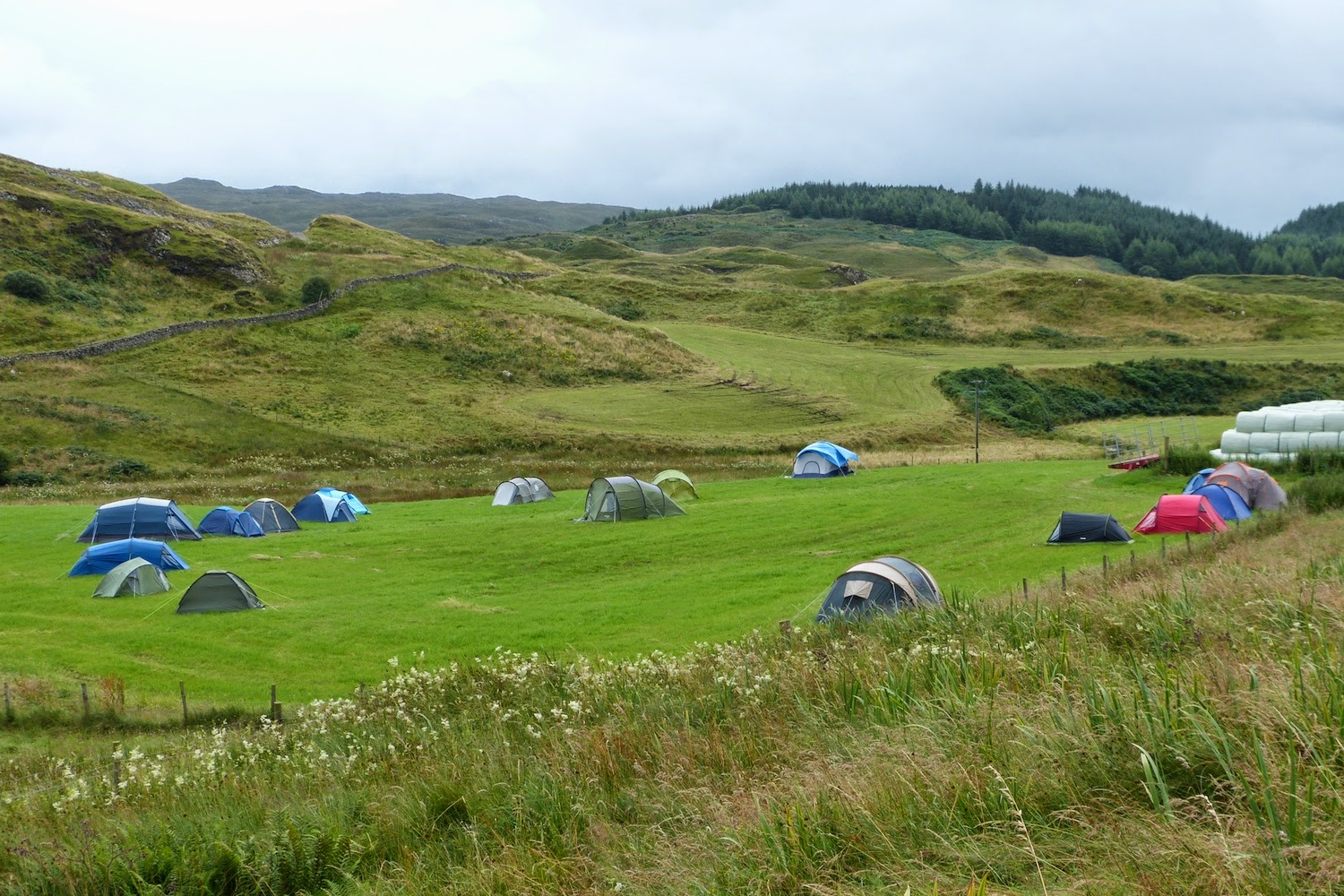 The archaeologists who come every year to Swordle on Ardnamurchan's north coast have now been here for more than a week, with many of them camping in the field by Swordle Byre.  The Ardnamurchan Transitions team were the group who found the Viking boat burial here in 2011, the first finds from which were recently displayed at the British Museum. 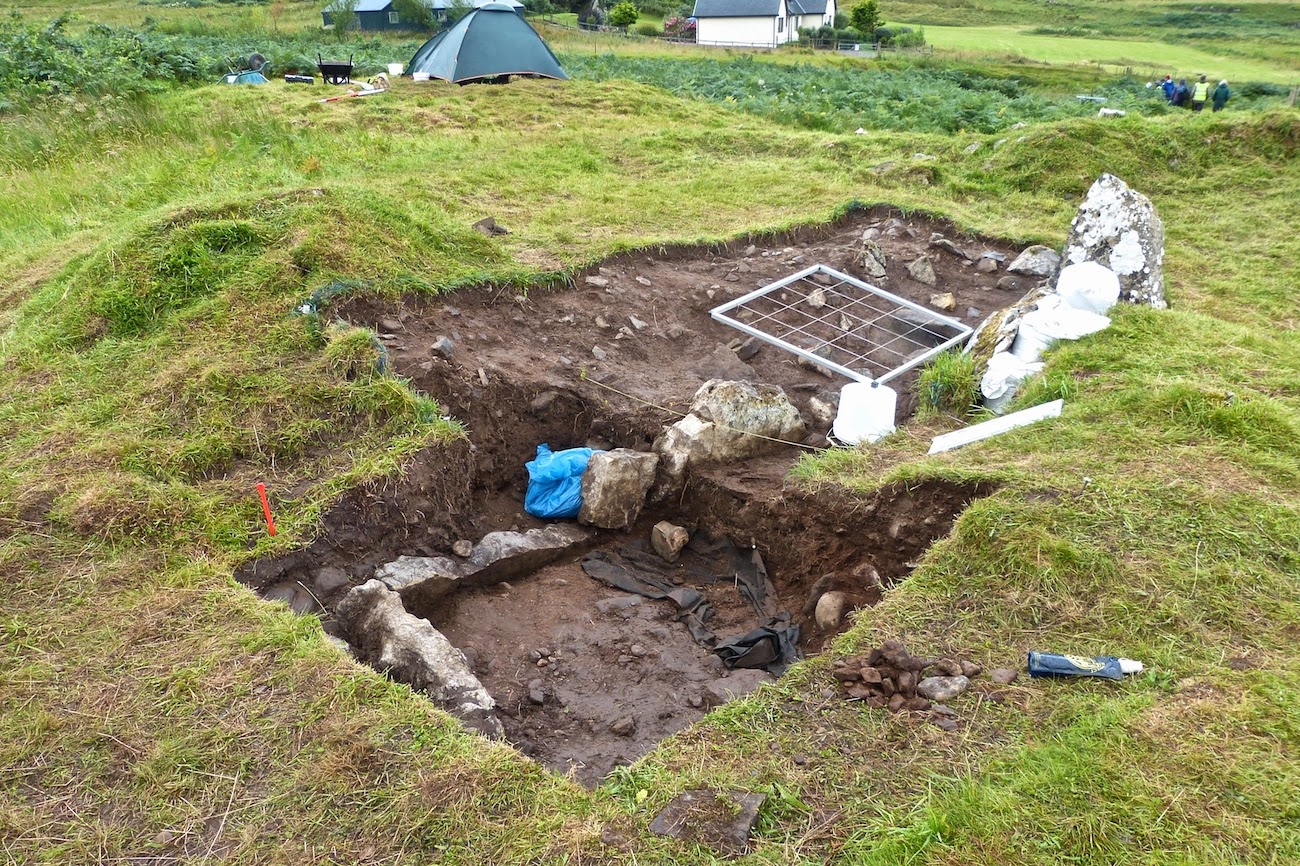 We went to visit them this morning, to find most of the team working in the field immediately to the east of the burn.  Their first site is on the neolithic chambered cairn called Cladh Aindreis, where they have permission from Historic Scotland to excavate part of the area in the foreground of this picture.  They've worked here in previous seasons. 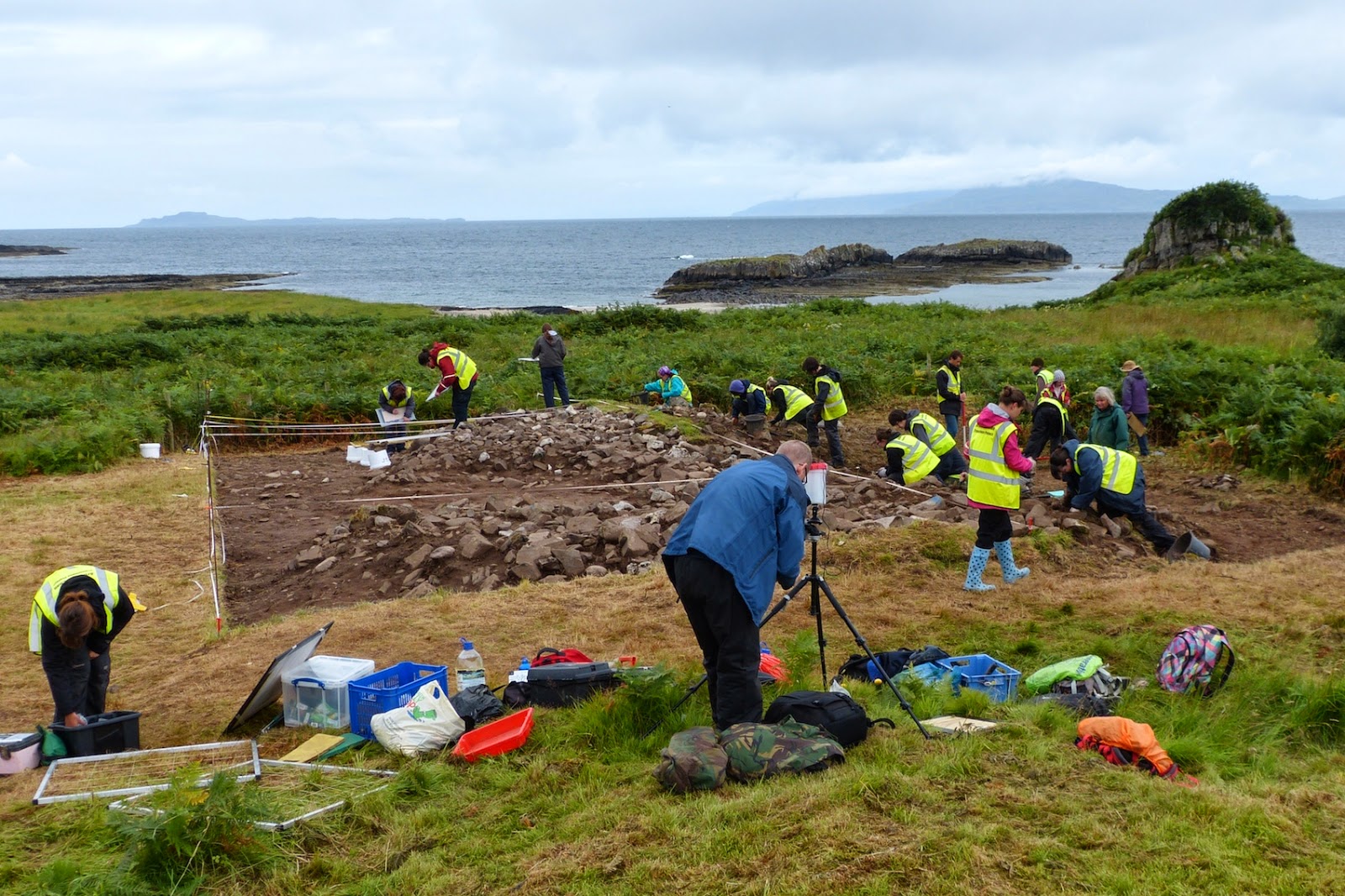 The cairn has a long 'tail' of rocks which runs away from Cladh Aindreis towards the NNW - this picture is taken from the cairn looking towards their second excavation site.  They have permission to remove the topsoil and expose the structure of the 'tail' in what will be the largest excavation they've carried out in their years of coming here.  They are allowed to move any rocks which are evidently not 'in situ', but they cannot excavate the  structure without further permission from Historic Scotland.  This is a shame as.... 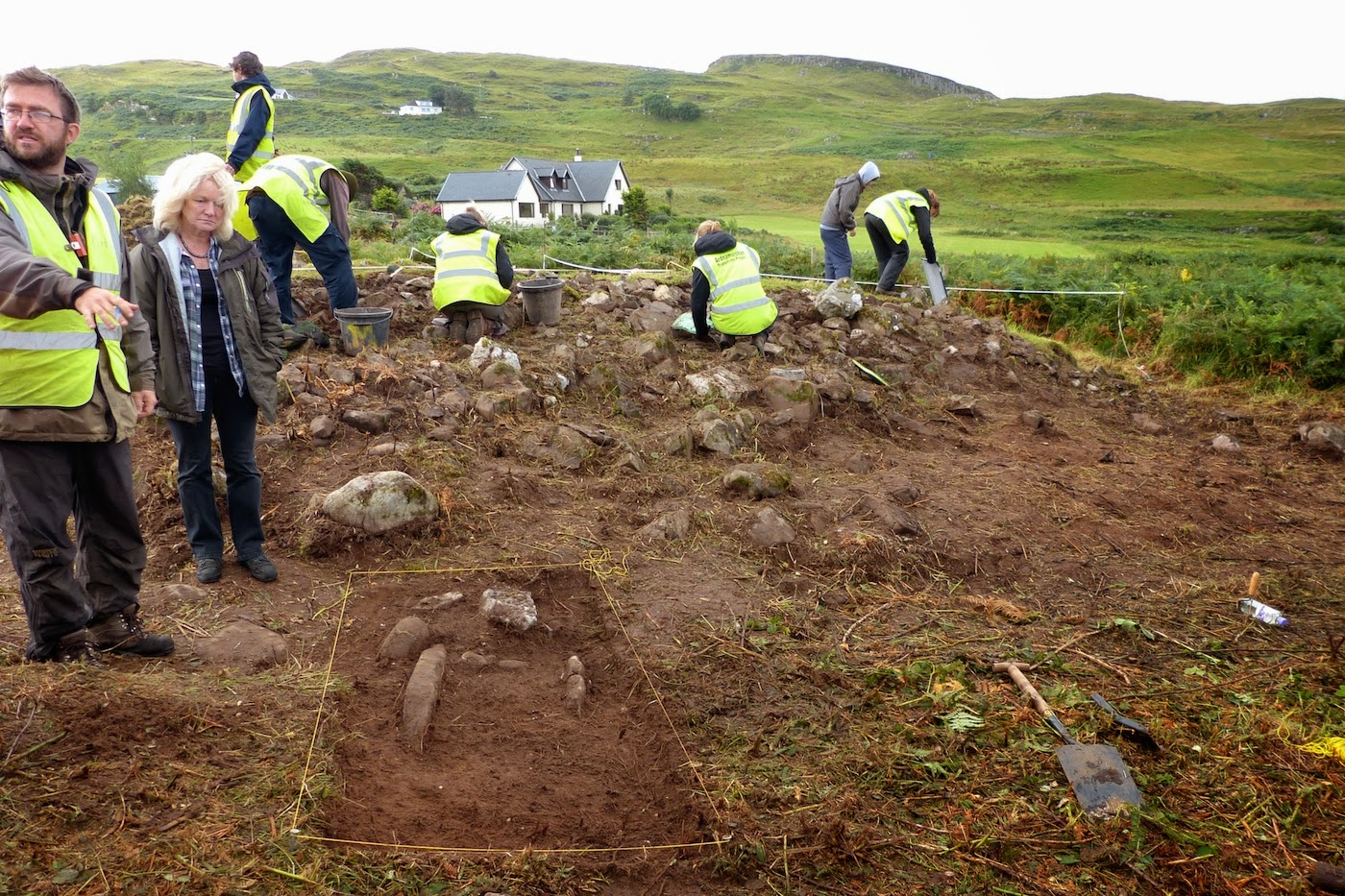 ....they have already exposed what is probably a small cist - in the foreground of this picture - in which there is a good possibility that there may be a burial. 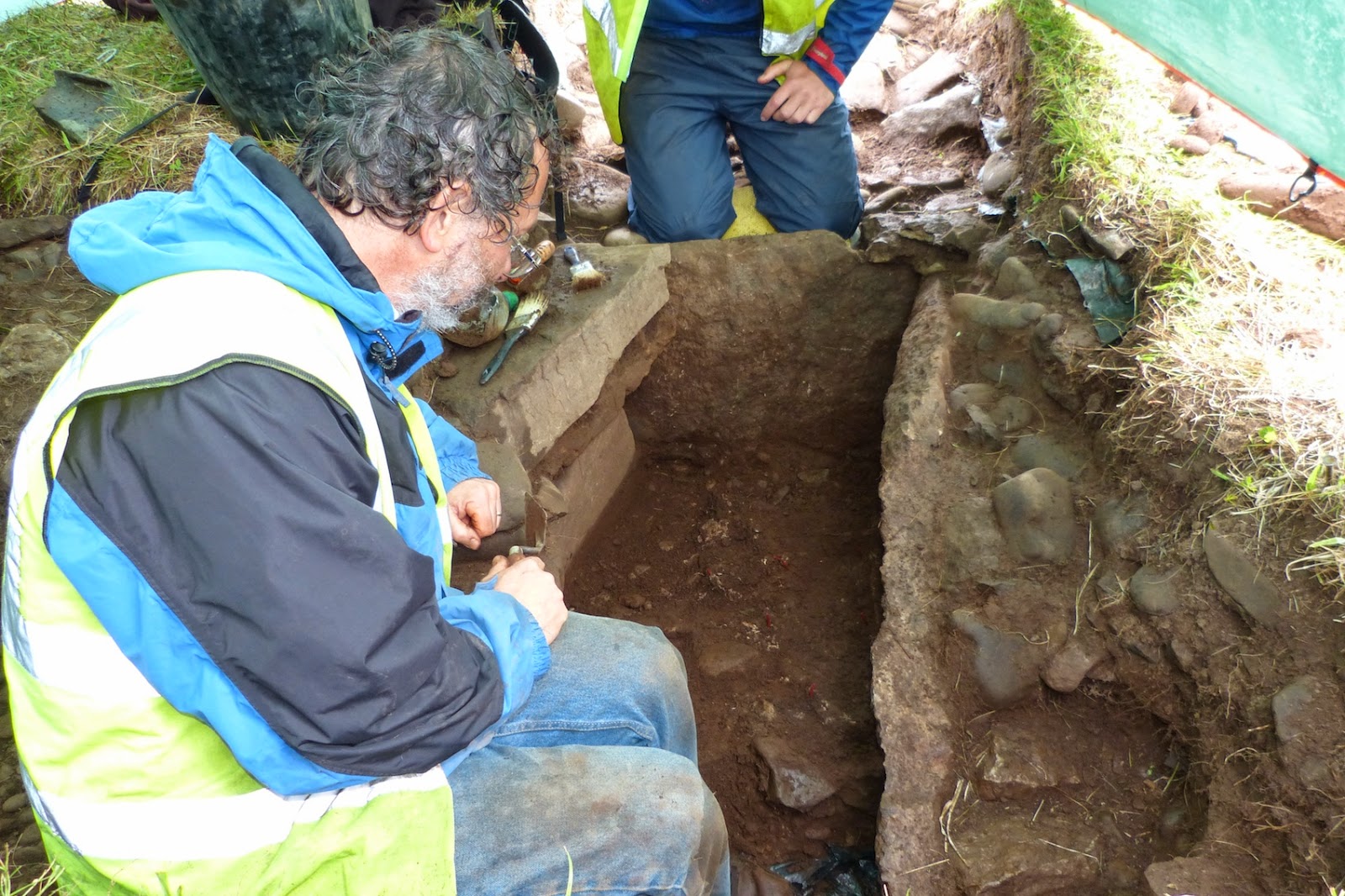 Just to the west of Cladh Aindreis is another mound which they excavated in 2010 which they called Ricky's Cairn.  They knew it contained a bronze age cist, part of which they have excavated, finding a skull which was dated to 1650BC.  The rest of the cist is being excavated by Professor John Robb of Cambridge University who is an expert on bones - which is just as well as he is currently revealing the bones of the rest of the body, curled up in the foetal poison on his/her side. 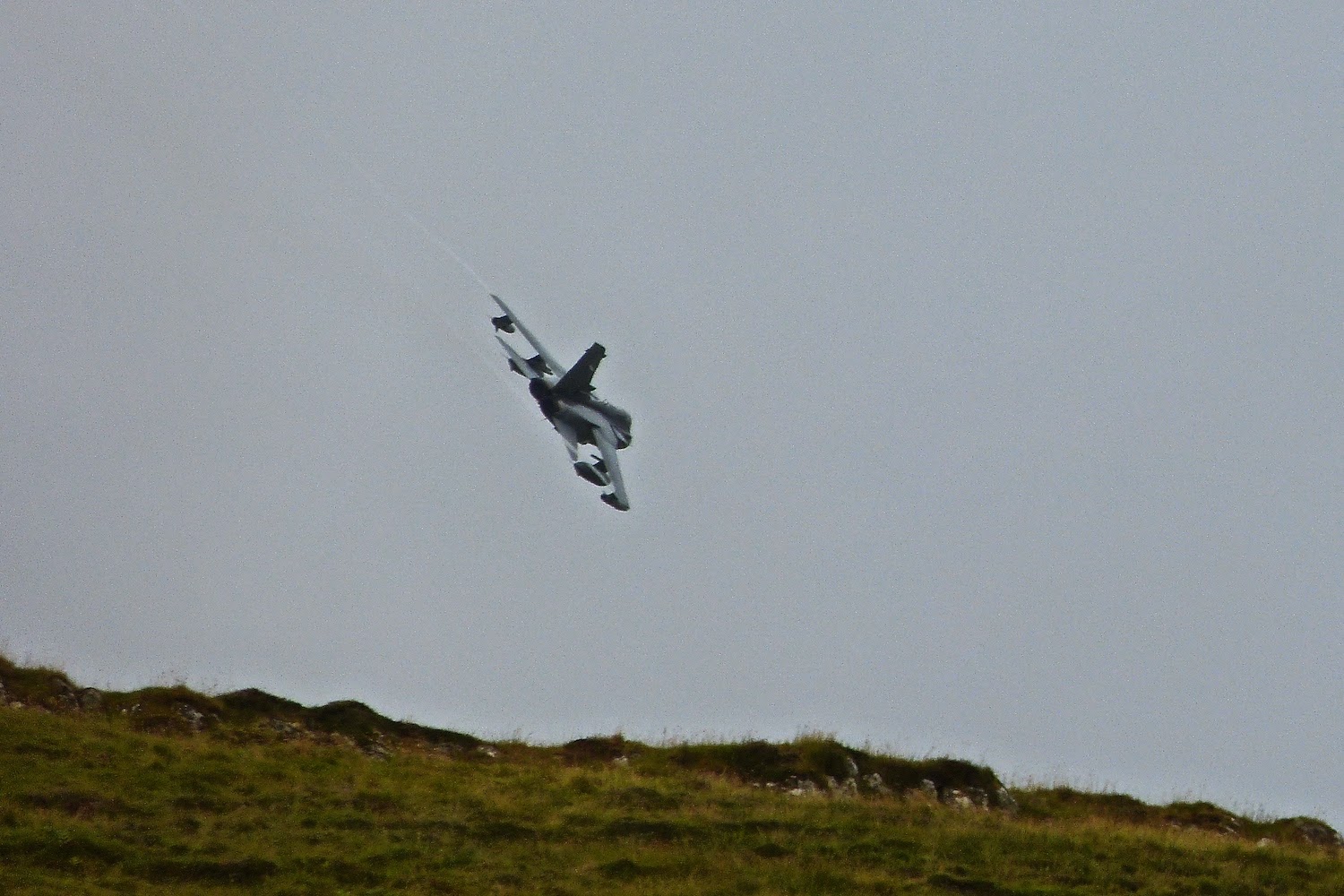 There are so many exciting things going on at Swordle at the moment that the RAF sent a plane to investigate - which twice came in very low across the site.  Fortunately for us, access to the site is easy, with an Open Day this Sunday and plenty of opportunity to join the excavation.  There's also a talk about the site in the Kilchoan Community Centre at 7.30 on Thursday evening - full details here.


The Ardnamurchan Transitions Project's website is here.
Posted by Jon at 14:56