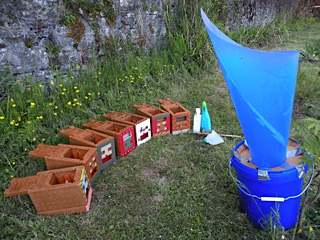 Early last year we were offered support and, once we were ready, Amm stock from Andrew Abraham on Colonsay. This helped us create our plans for an Arnamurchan Black Bee Project with greater confidence, encouraged also by BIBBA’s generosity in supporting the start-up with £1500 funding from Project Discovery.

Last year we concentrated on improving our queen-rearing skills and put to good use the mini-nucs bought and funded by BIBBA. Each of these was used, some of them for two cycles of queen mating, working with our existing local bees which are some 45-80% Amm.

Sadly the SBA/BIBBA queen-rearing course planned for June was cancelled because of the late, cold Spring so we had to rely on guidance from books, the SBAi forum and experienced beekeeping known to us. 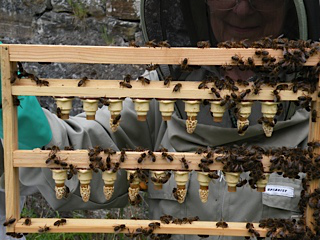 We were new to grafting and had some success with acceptance of larvae (50%+). We also used the Cupkit system which gave more reliable acceptance but we recognise that, with the black bees in future years, this system will be less appropriate as we will wish to breed from all the queens we have, rather than rear many queens from one or two queens.

Mating was also reasonably successful: about 80%, though we have since found that a few of those queens were not well mated (the weather was very mixed) and their colonies failed in the Spring. 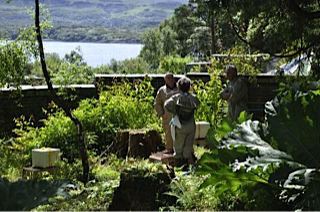 Last year Ardnamurchan Estate kindly offered us a selection of apiary sites at and around Glenborrodale, approximately half way down the Ardnamurchan Peninsular and some 8.5 miles from the nearest managed honey bee colonies. The area was chosen for its absence of managed local hybridised bees and good forage. A wild colony survives in woods some 3 miles from Glenborrodale and these bees look black though their genetics are yet to be tested (see below re mating).

This Spring we checked the various Glenborrodale sites offered by the Estate and chose an excellent position for an apiary, facing south and sheltered on all sides (pictured).

Gill Calver, who lives at and runs Glenborrodale Nursery, also offered us apiary space and we agreed to set up two of the colonies within her grounds, also in a favourable position. This apiary is less than half a mile from the first one. 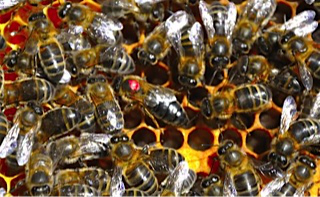 Andrew Abrahams had agreed to visit us to offer queen rearing training over two days in June. Unfortunately, because of poor Spring weather on Colonsay, he was in difficulties with his own queen rearing and asked to cancel his visit to concentrate on getting a fresh batch going. We were disappointed but it was a good reminder than timing is crucial with queen rearing and, to do it successfully, you need to commit to the timetable of tasks and monitoring.

Instead, he agreed that I could join his already fully-booked course on Colonsay early in July and this was immensely interesting, enjoyable and informative. I returned with the first two Amm queens for our project, both overwintered from 2013 in mini-nucs. These queens have now been introducing into nucleus colonies and are laying well. We have grafted larvae from one of them already and have one virgin queen being test-mated near our apiary site. We know there is a long-standing colony of wild bees some three miles from our Glenborrodale apiaries and we hope to learn about the genetics of those bees if the queen mates successfully. 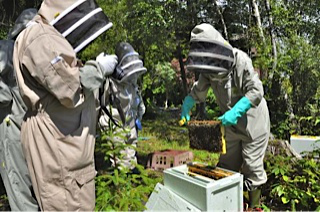 The remaining four queens due from Andrew were brought over from Colonsay by Steve Sunderland, Lead Bee Inspector on 15 July. These queens were introduced into nuclei and all of them, plus the original two, were taken to our apiary sites the following weekend. We decided to leave the newest colonies to settle and will find out soon if those queens, all bred this year, are laying successfully.

On Sunday 20 July several members attended. We examined the first two nuclei and their queens, enjoyed the sunshine and discussed the use of mini-nucs over our picnic tea (see 3 pics).

Soon the rest of the mini-nucs will be in use again as we seek to breed a daughter queen (or more) from each of the queens received from Colonsay this year. 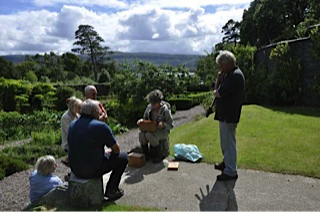 SAMMBA, our new association for Sunart, Arnamurchan, Moidart and Morvern, is committed to the Black Bee Project and we have plans to undertake the following over the coming year:
We would welcome a visit from representatives of BIBBA and soon I will upload information and photos of our project onto the BIBBA website.

Kate Atchley, SAMMBA Secretary
Photos by John Baker.
Many thanks to Trevor Potts for enabling the Diary to post this.
Posted by Jon at 16:20