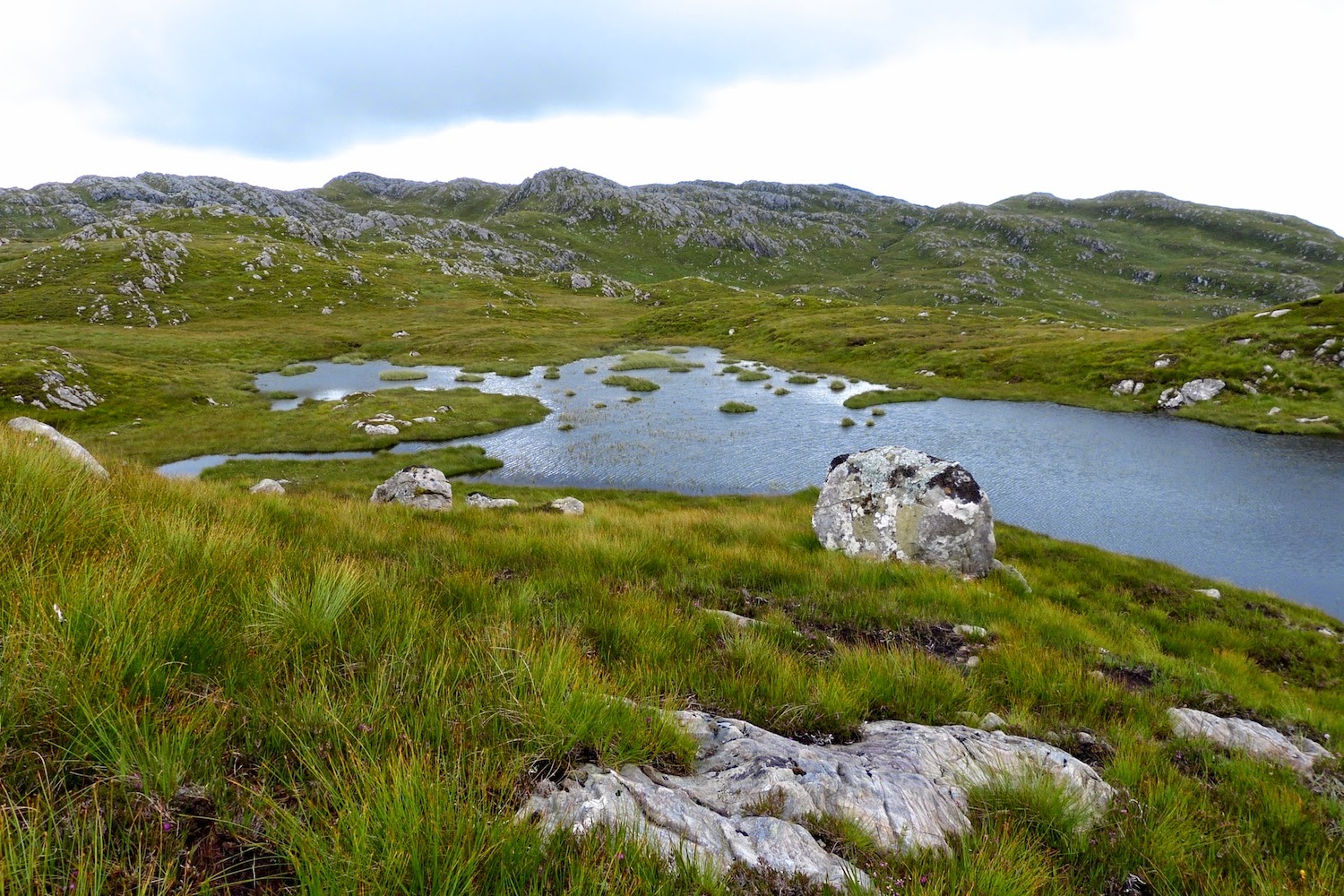 Having already visited two new lochans on our Sunday walk, it seemed almost unnecessary to go on and find more, but there's something in the spirit which, once one starts exploring, drives one on.  Despite the continuing grey weather, the third lochan we found in the wilderness to the southeast of Ockle was a very pretty little lochan with branches reaching into the small glens which converged on it. 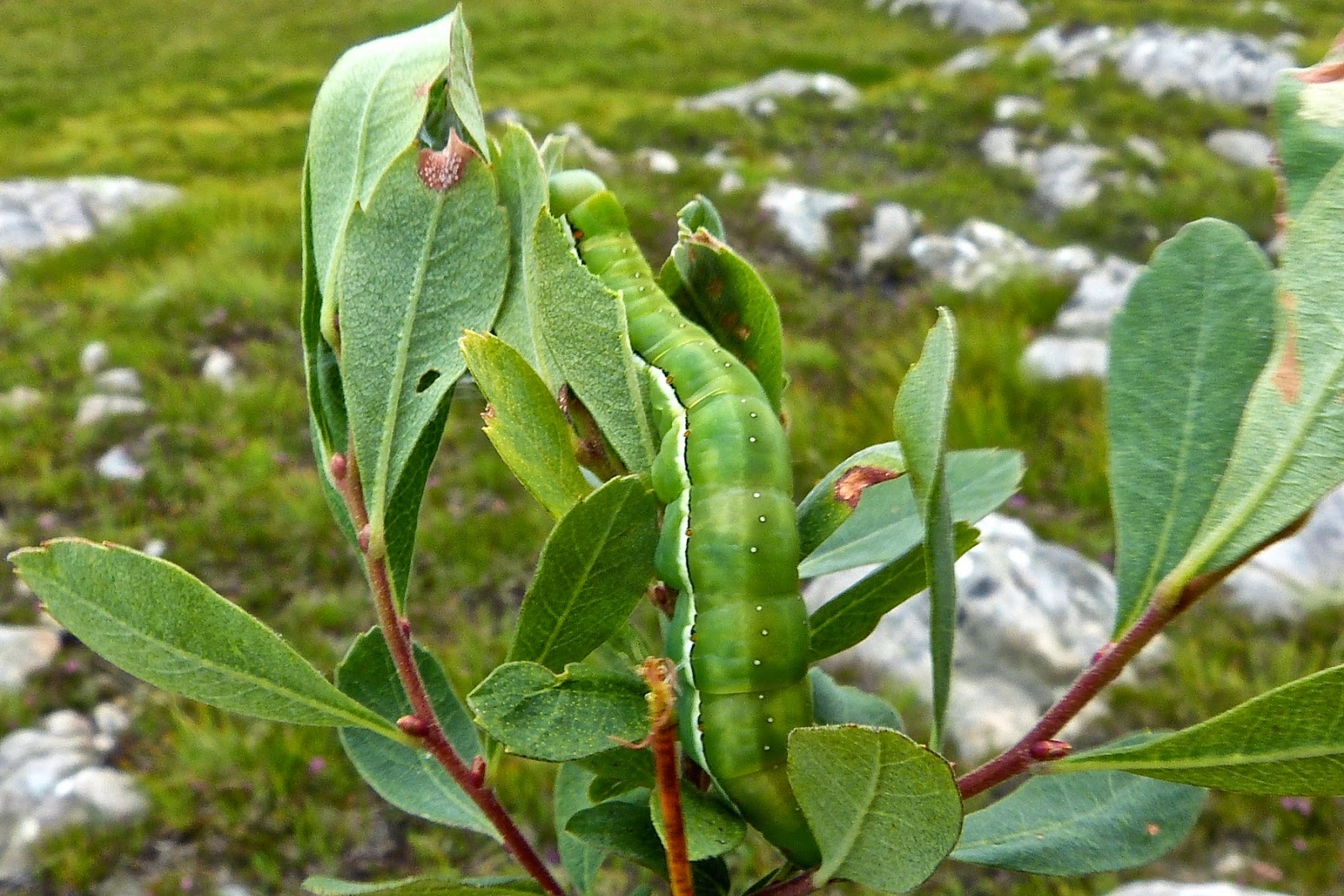 This fat caterpillar is the caterpillar of the red sword-grass moth, Xylena vetusta, feeding on bog myrtle. 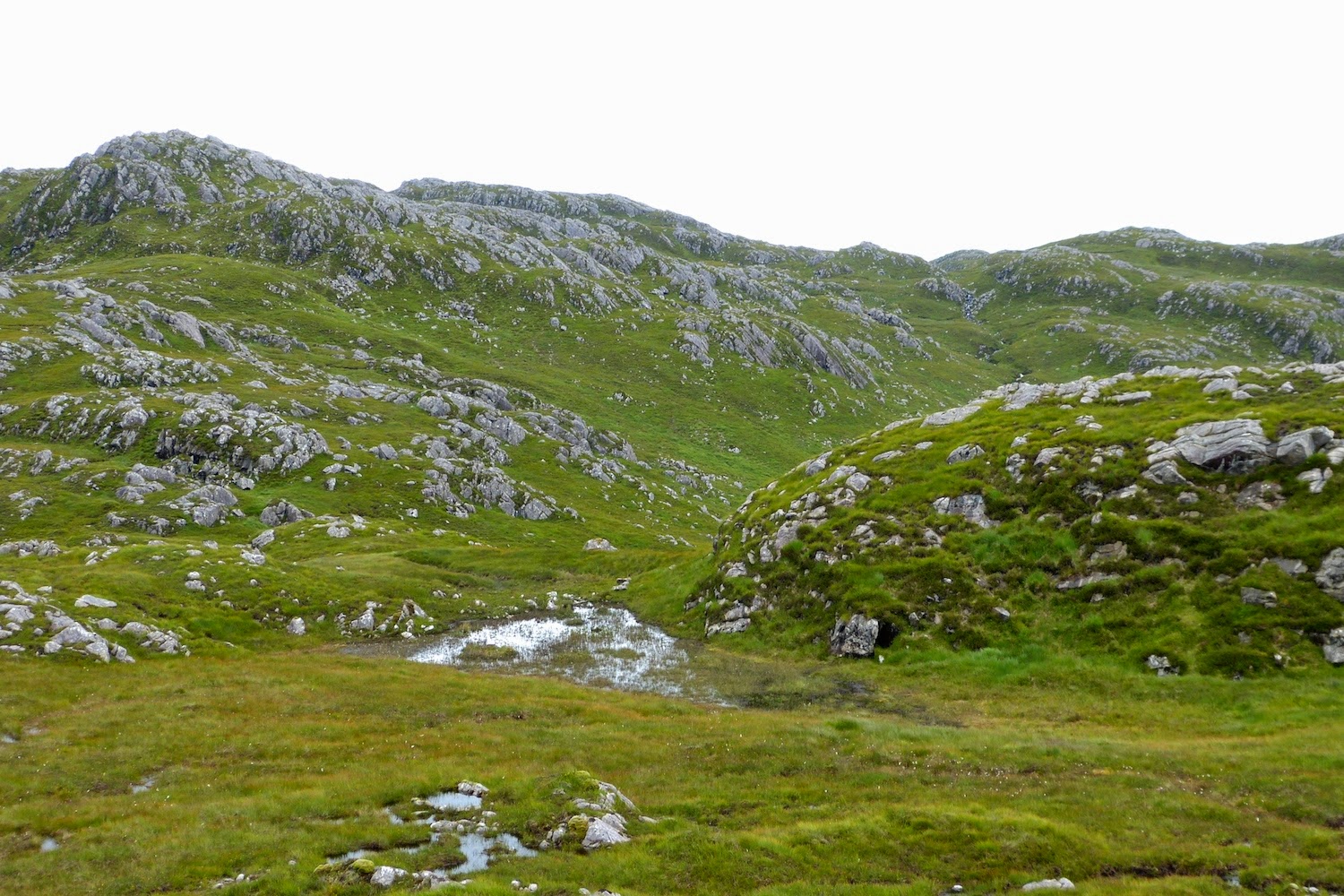 We discussed, at this point, whether we'd walked enough, and should sit and enjoy a relaxed lunch before making our way back to Ockle, but another lochan, so small it was hardly visible on the map, beckoned, so we visited it before.... 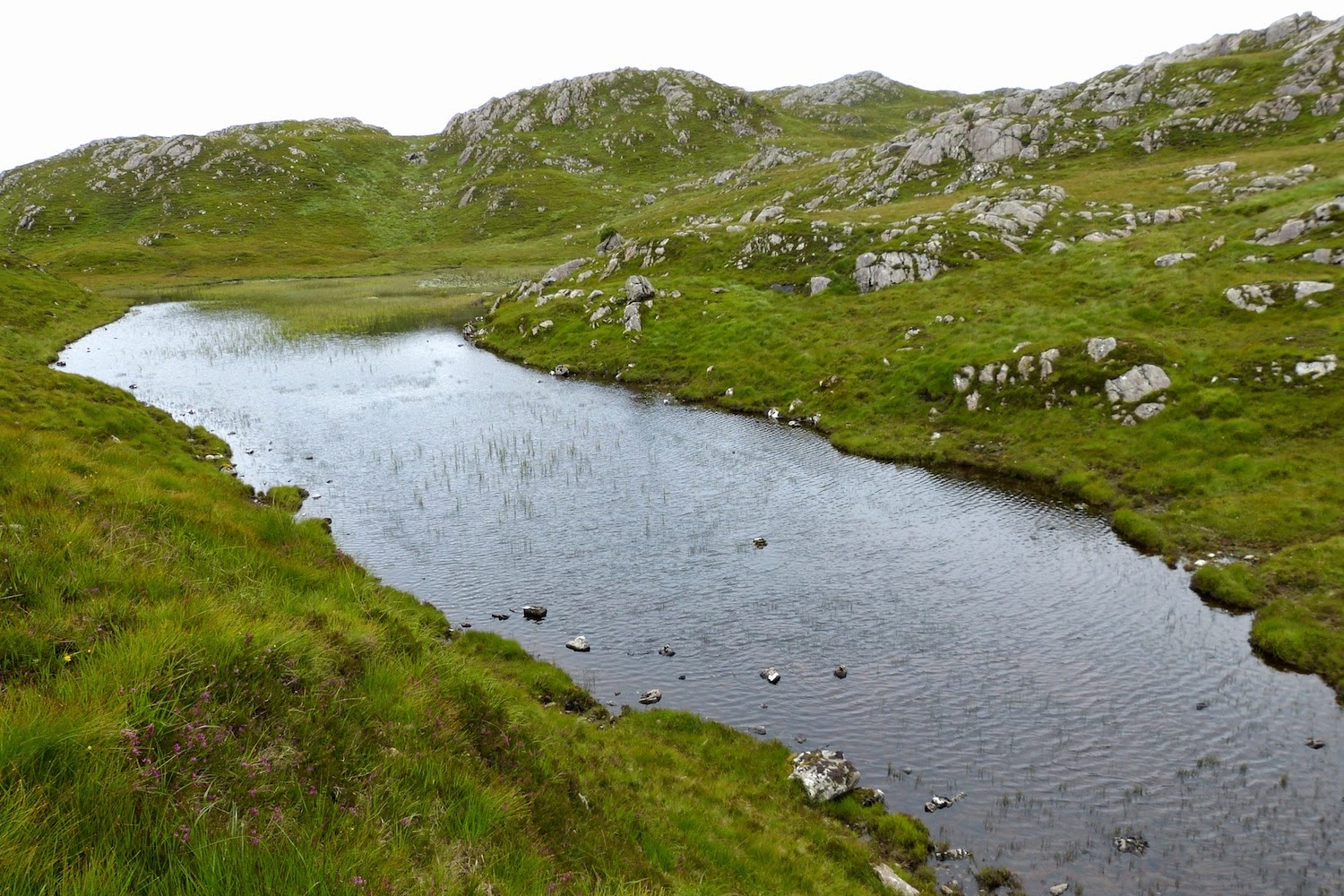 ....moving on to a much larger one, named this time on the map as Lochan Clach na Boiteig.  Clach is stone, and boiteig comes from boiteag, a maggot or worm, so this is another name which, from its literal translation, has little meaning, leaving one wondering what the original reference was to. 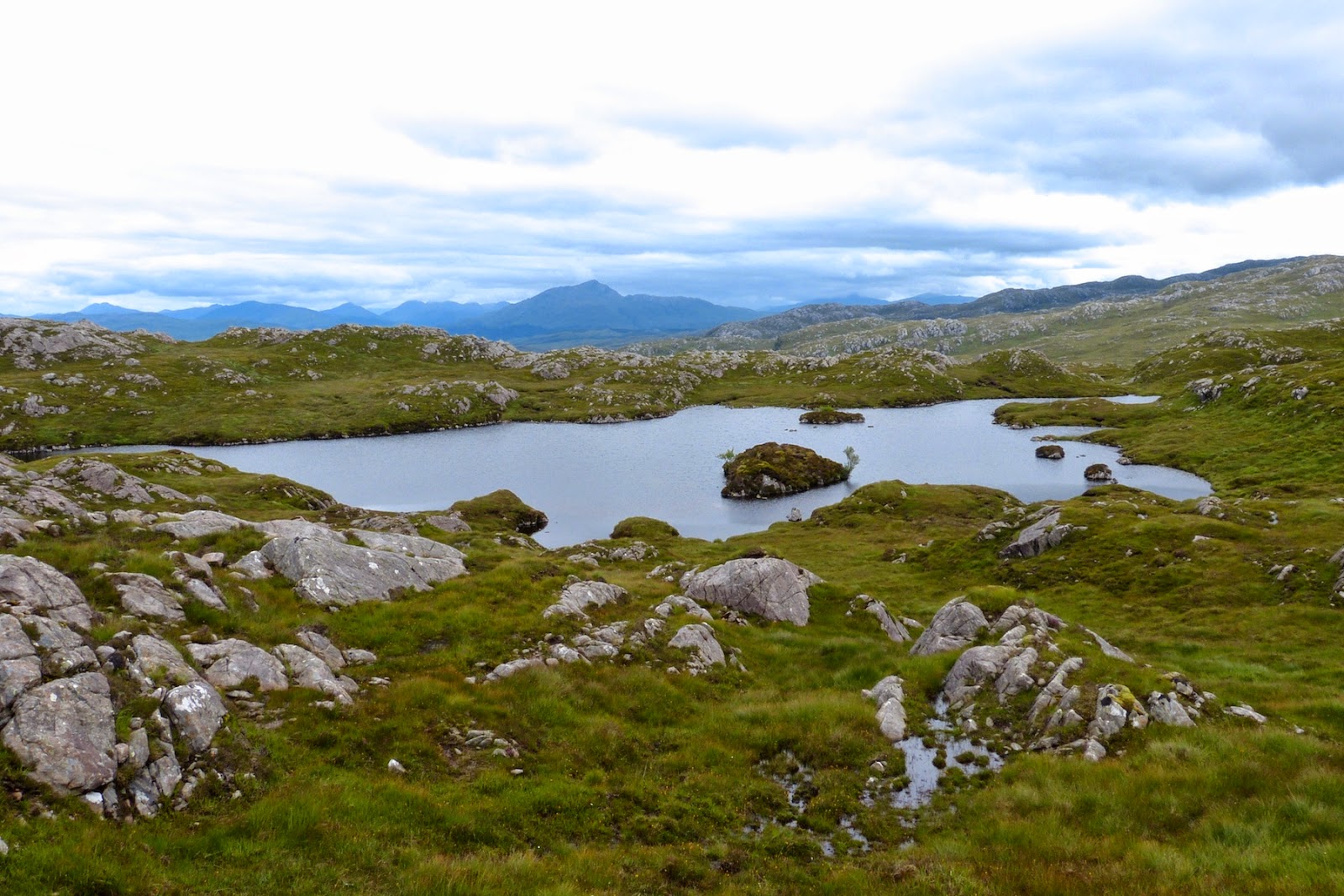 We ate lunch beside Lochan Clach na Boiteig, and could then have turned back, but two other lochans lay only 500m or so to the east, so we pressed on to them.  Loch Choinnich Mor is large enough to be a 'loch', the literal meaning of its name being the big, mossy loch. 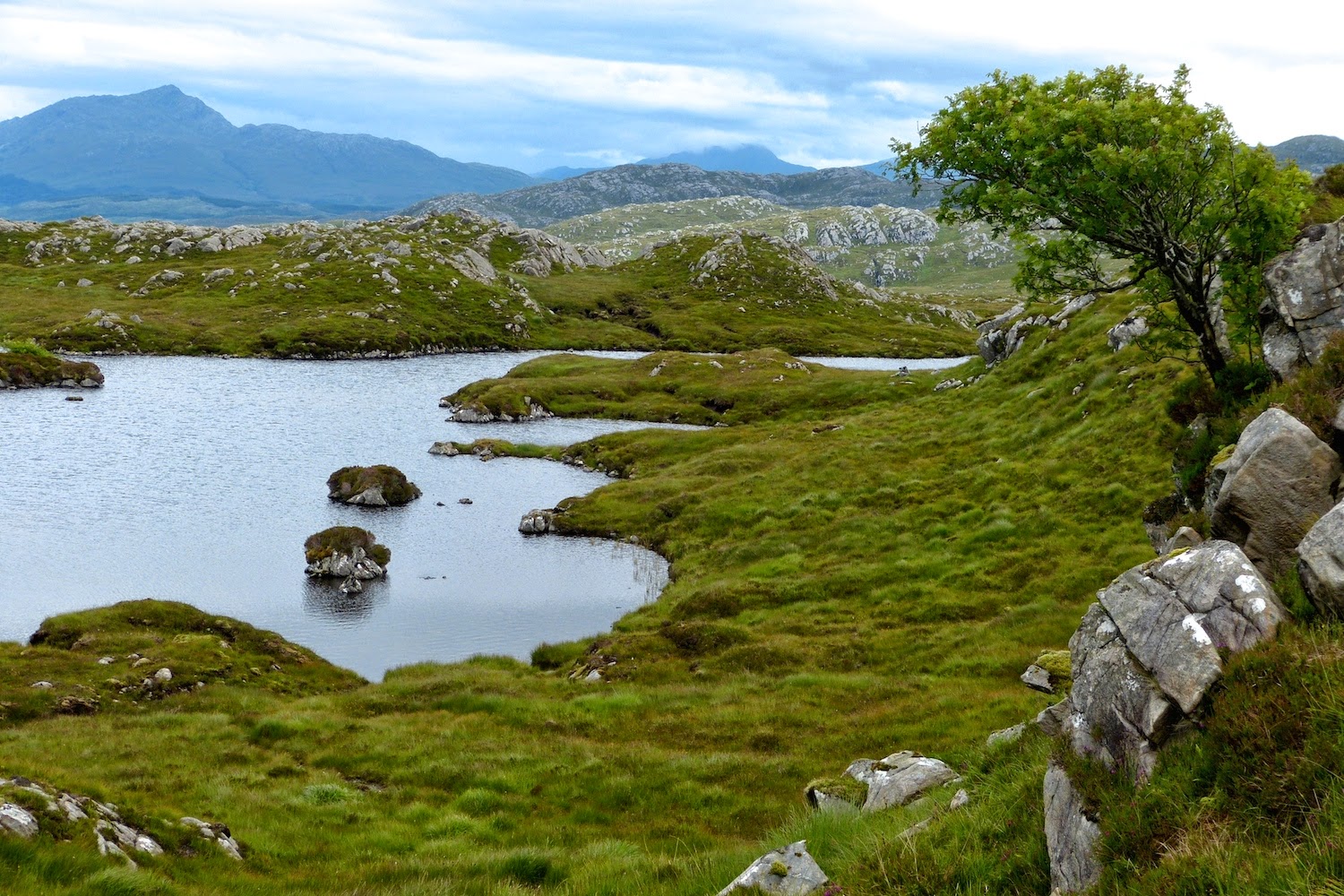 It was of interest for the vegetation on the small islands that dotted its surface, all of which carried thick coverings of heather, while close to its shore stood the only tree for miles, an old rowan tucked into a low cliff face.  Both might be explained because neither could be reached by the deer. 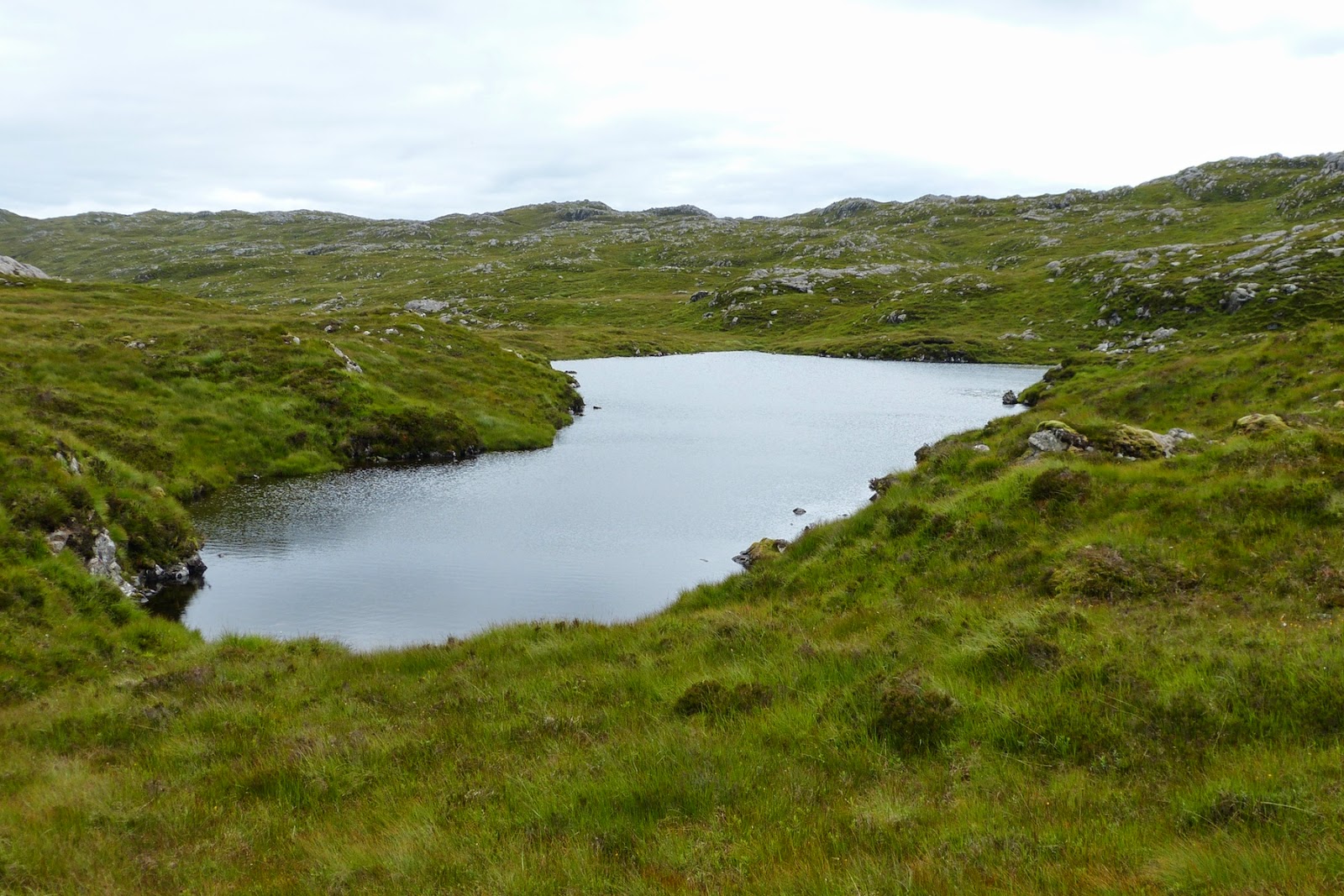 The adjacent, and slightly smaller Loch Choinnich Beag had deep, still waters, a lochan to tempt any angler.  This was the seventh lochan we'd visited and it was, by the feel of our legs, high time to be heading home.  So we turned north, aiming for the Gortenfern-Ockle track, but we diverted.... 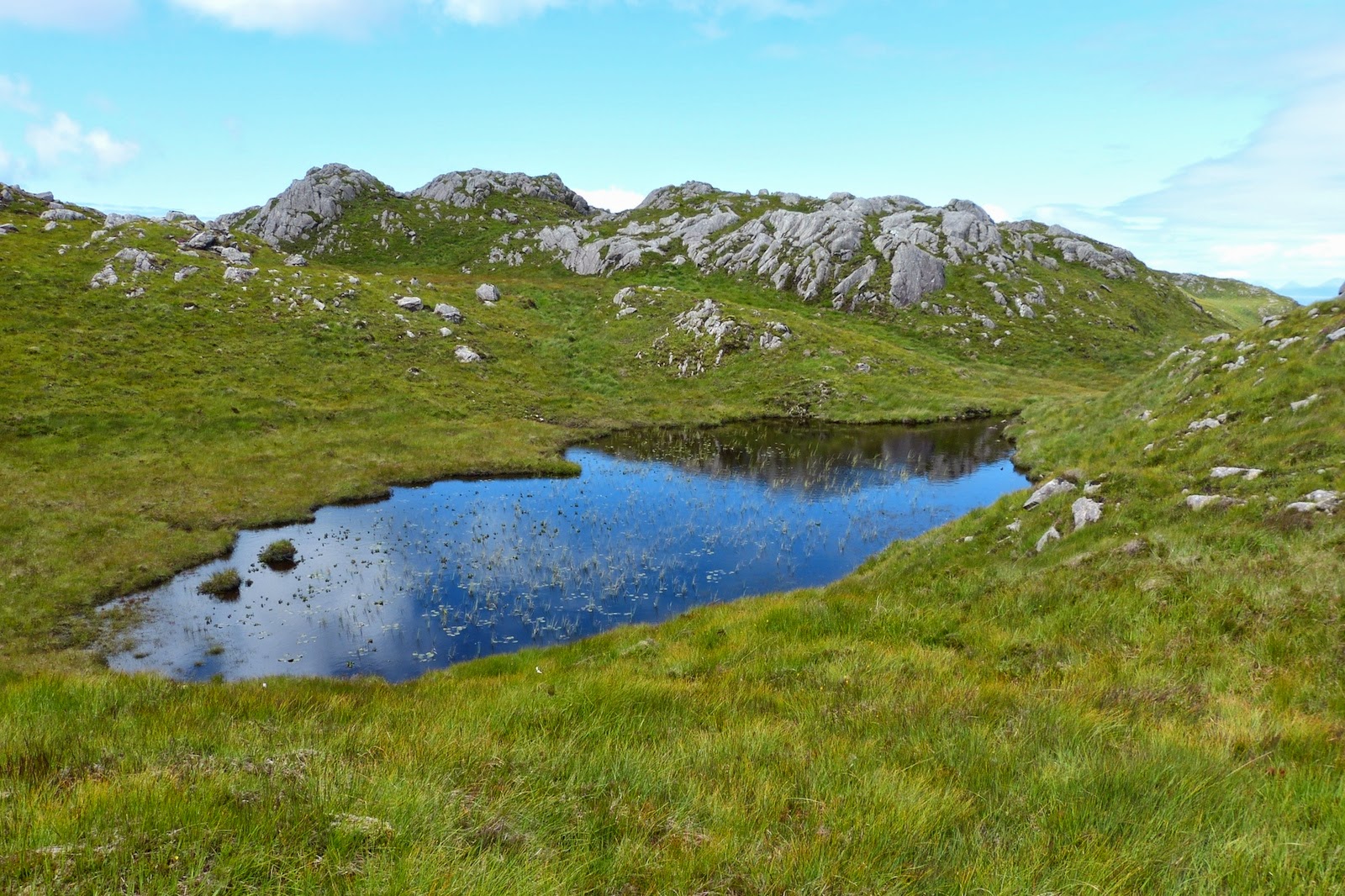 ....to take in one final lochan, our eighth of the day, stopping to rest beside it as the sun finally came out. 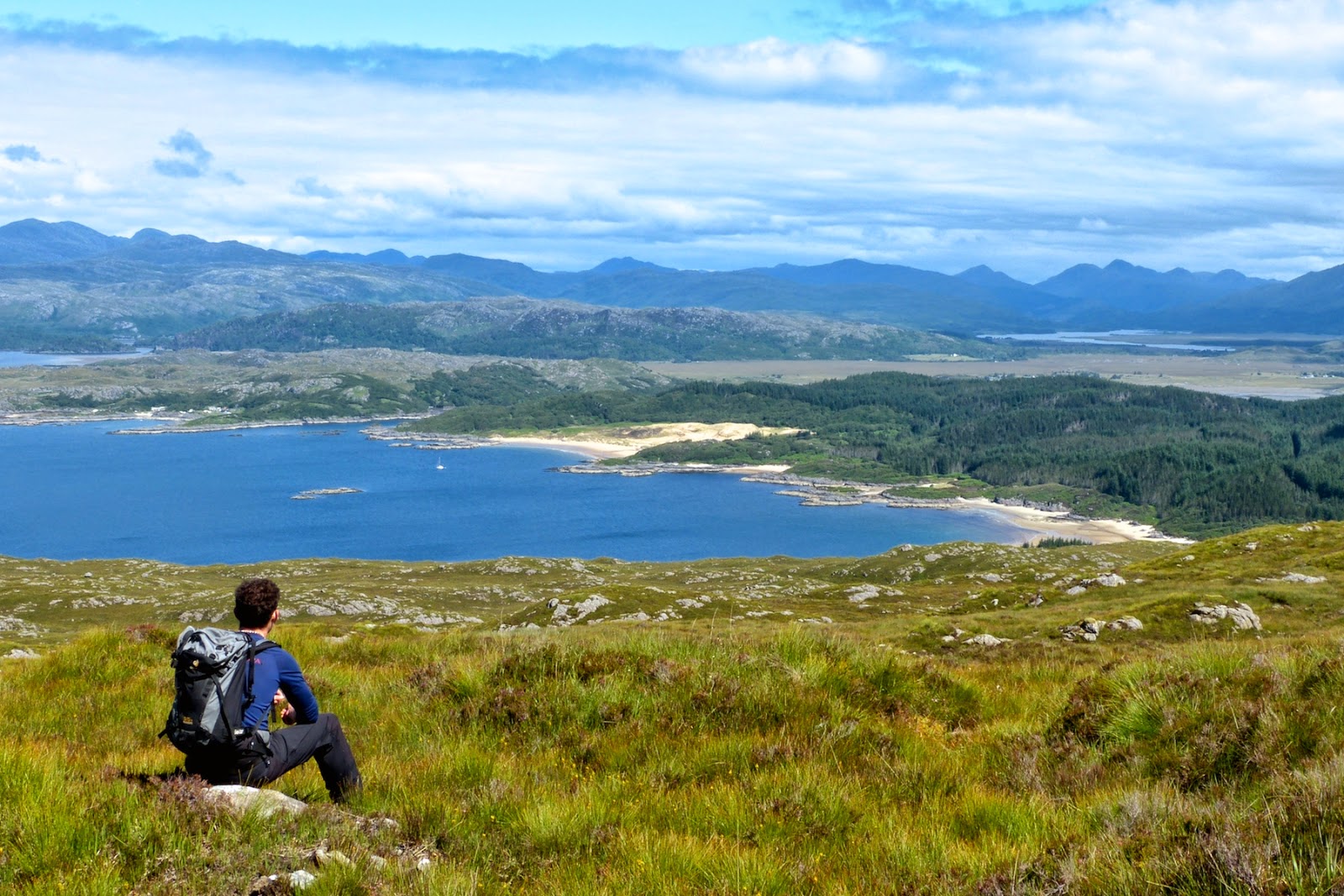 The walk back along the east slopes of Beinn Bhreac gave us magnificent views across to the Singing Sands, Kentra, and all the country around Acharacle and beyond to Loch Shiel.  We could have stopped more often, but the clegs - horseflies - were also out enjoying the sun and the passing meal. 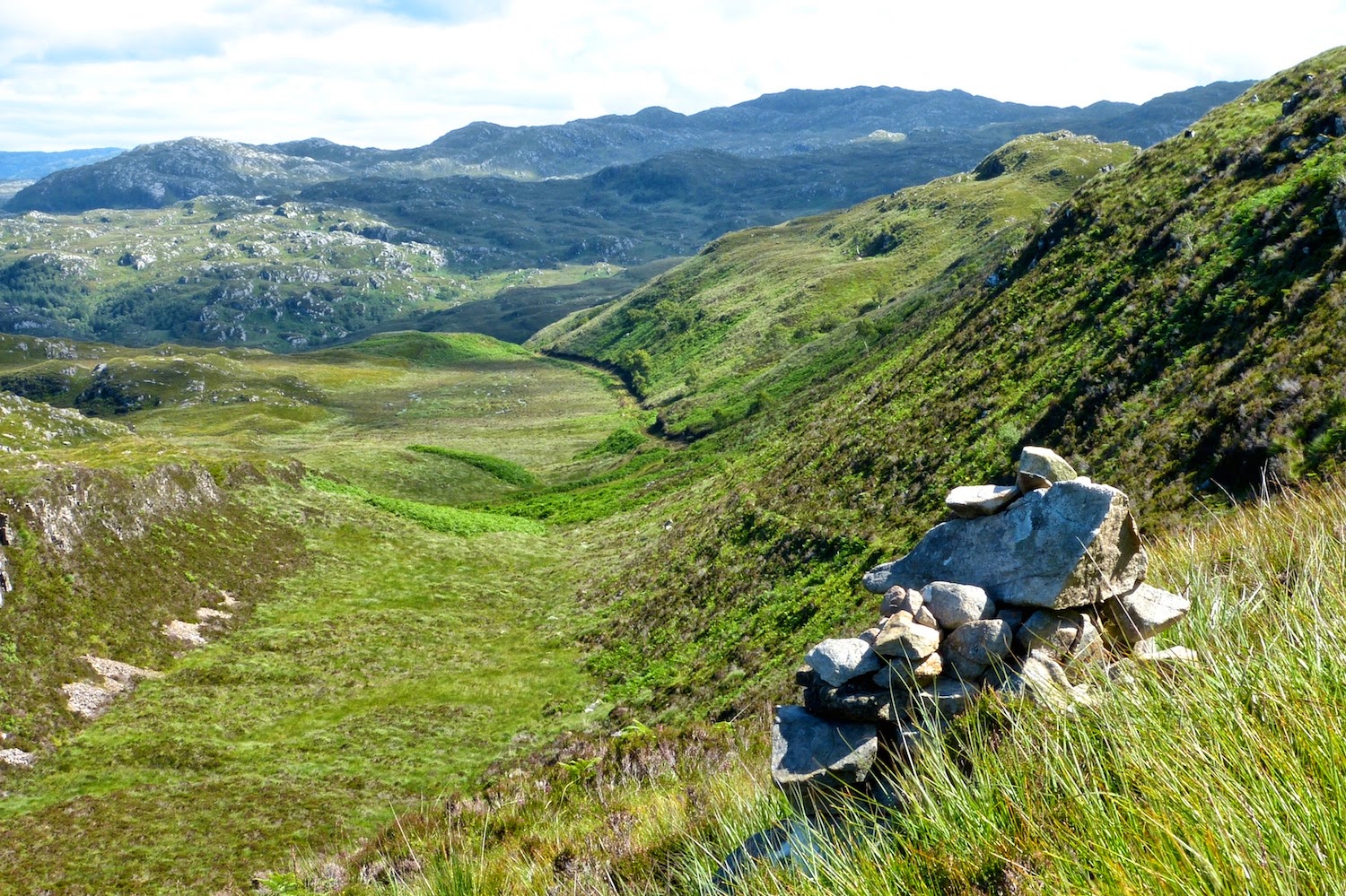 Even when we reached the track and turned for Ockle, we still had about five kilometres to go, but it was a pleasure walking on such a beautiful, sunny afternoon. 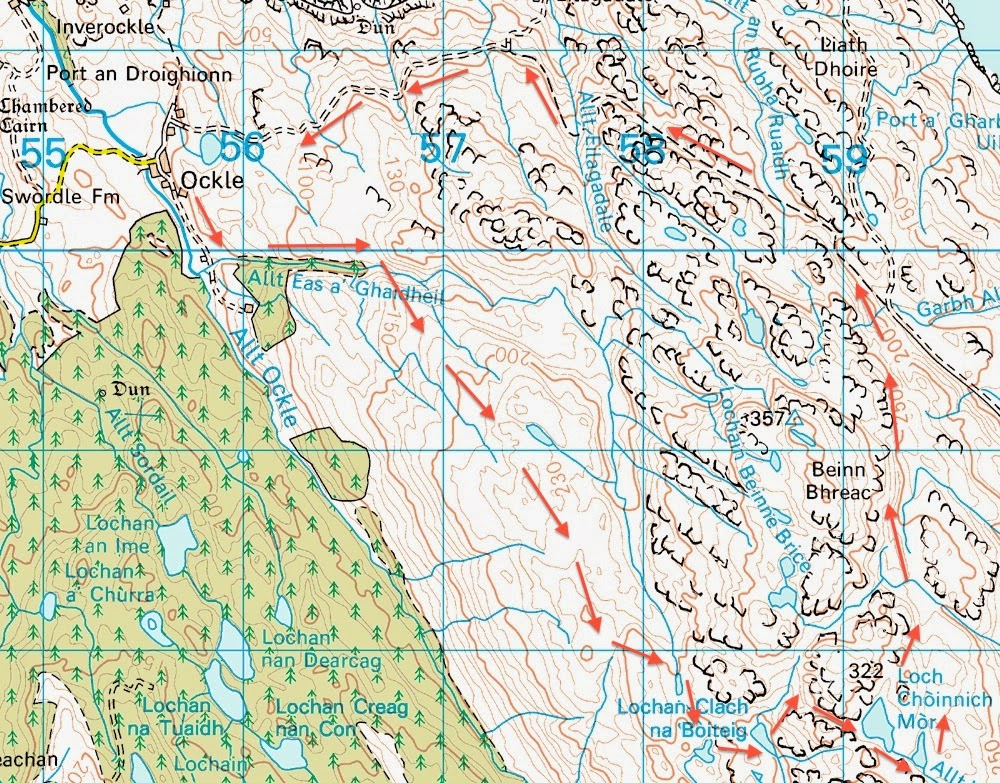 It's difficult to estimate distances when one is walking across such broken land, but we must have covered some 15 kilometres.  In the six hours we were away from Ockle, we didn't see another human.


Ockle Holidays offers cottages for rent at Ockle.
Posted by Jon at 07:00