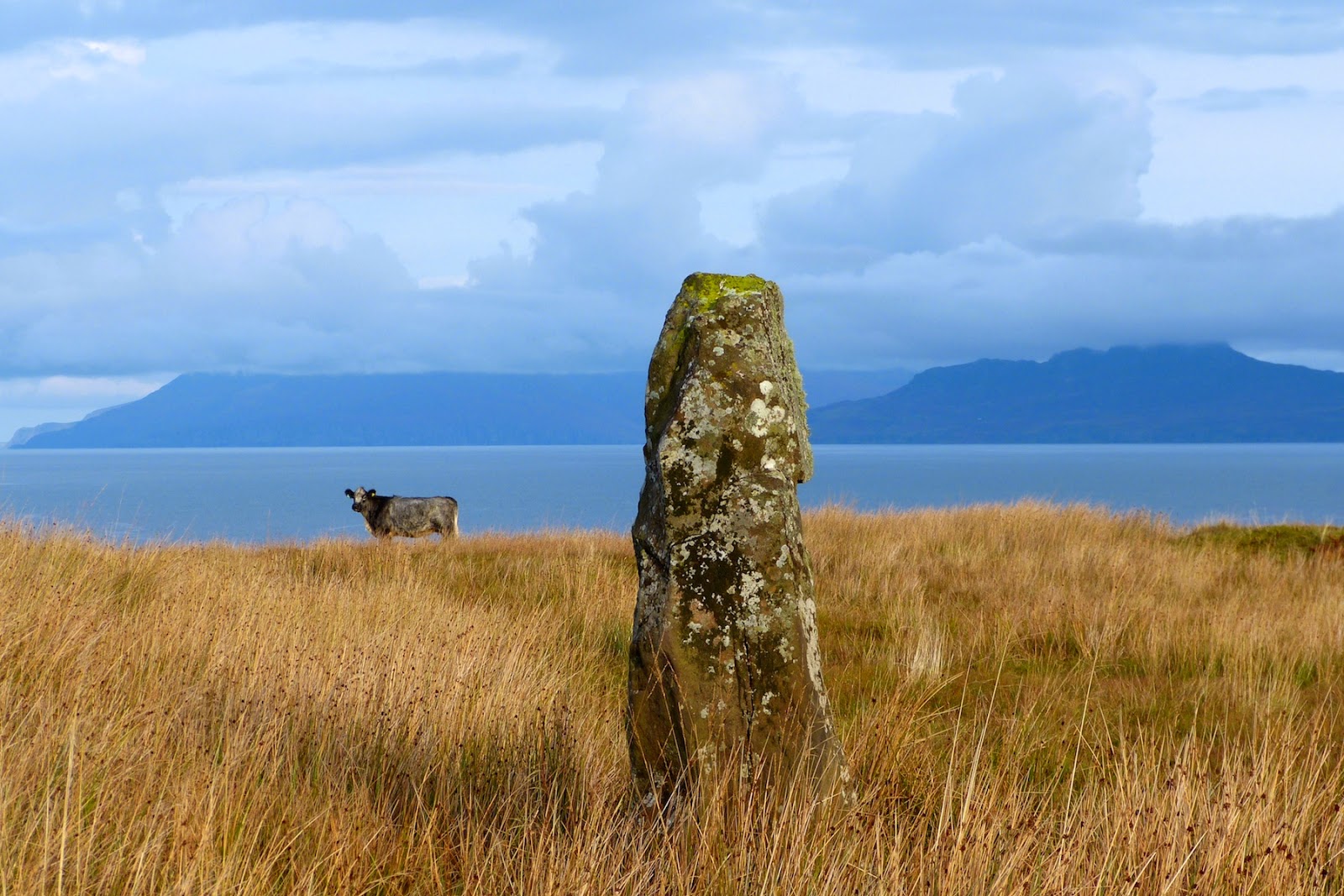 The day dawned misty, with a dew on the ground, but by the time we reached Branault the sun was struggling to find its way through high cloud, giving us almost perfect conditions for the day's project - making a thorough photographic record of Branault's magnificent Bronze Age monument.

This first view of the standing stone is from approximately south, looking out to Eigg, on the right, and Rum. 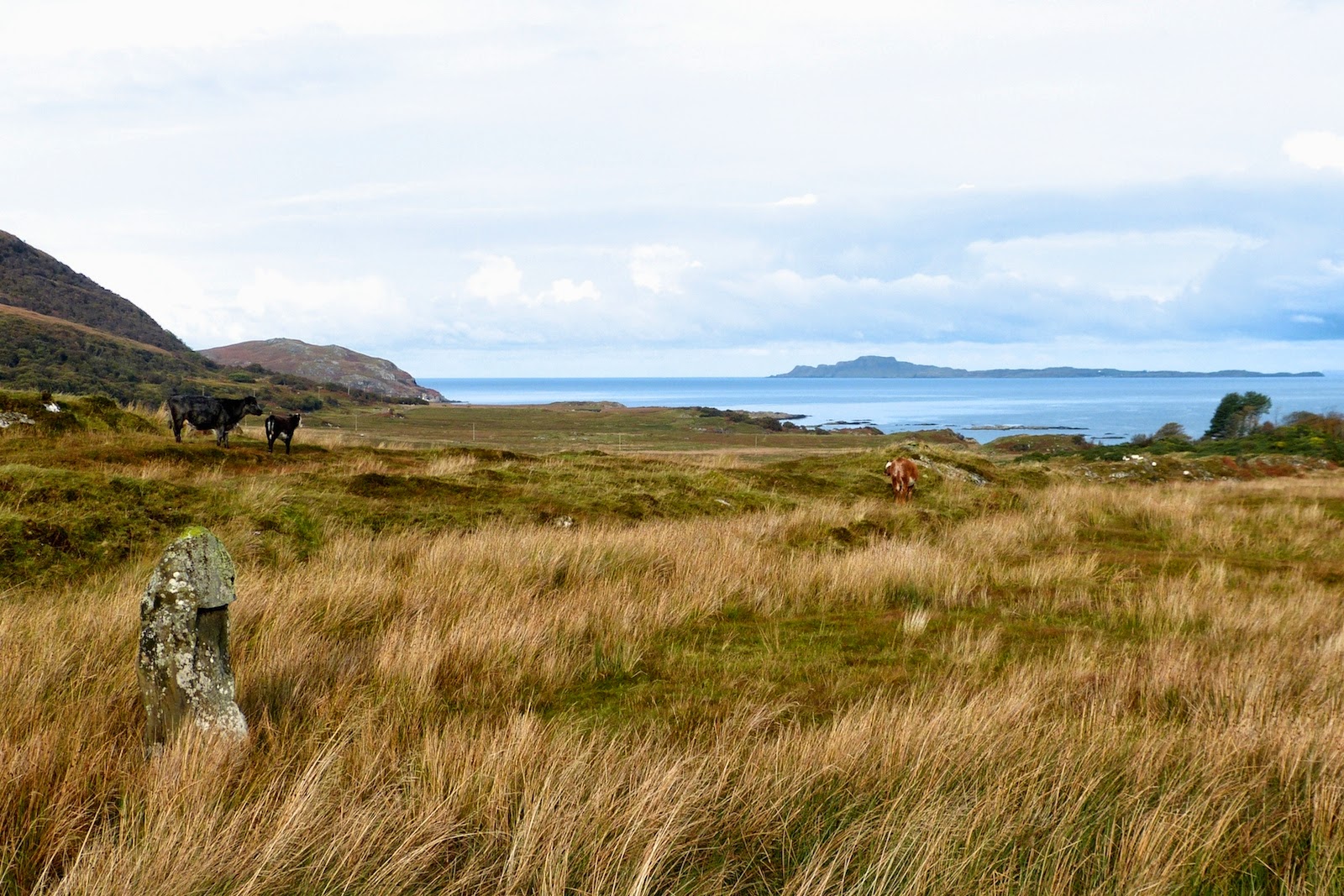 The visible stone is 2.2m high and stands in a small, saddle-shaped depression between two low ridges.  The land immediately around it is marshy, the stone itself standing in a  puddle of brackish water.  This picture, taken further round to the west, has Fascadale in the middle distance and Muck along the horizon. 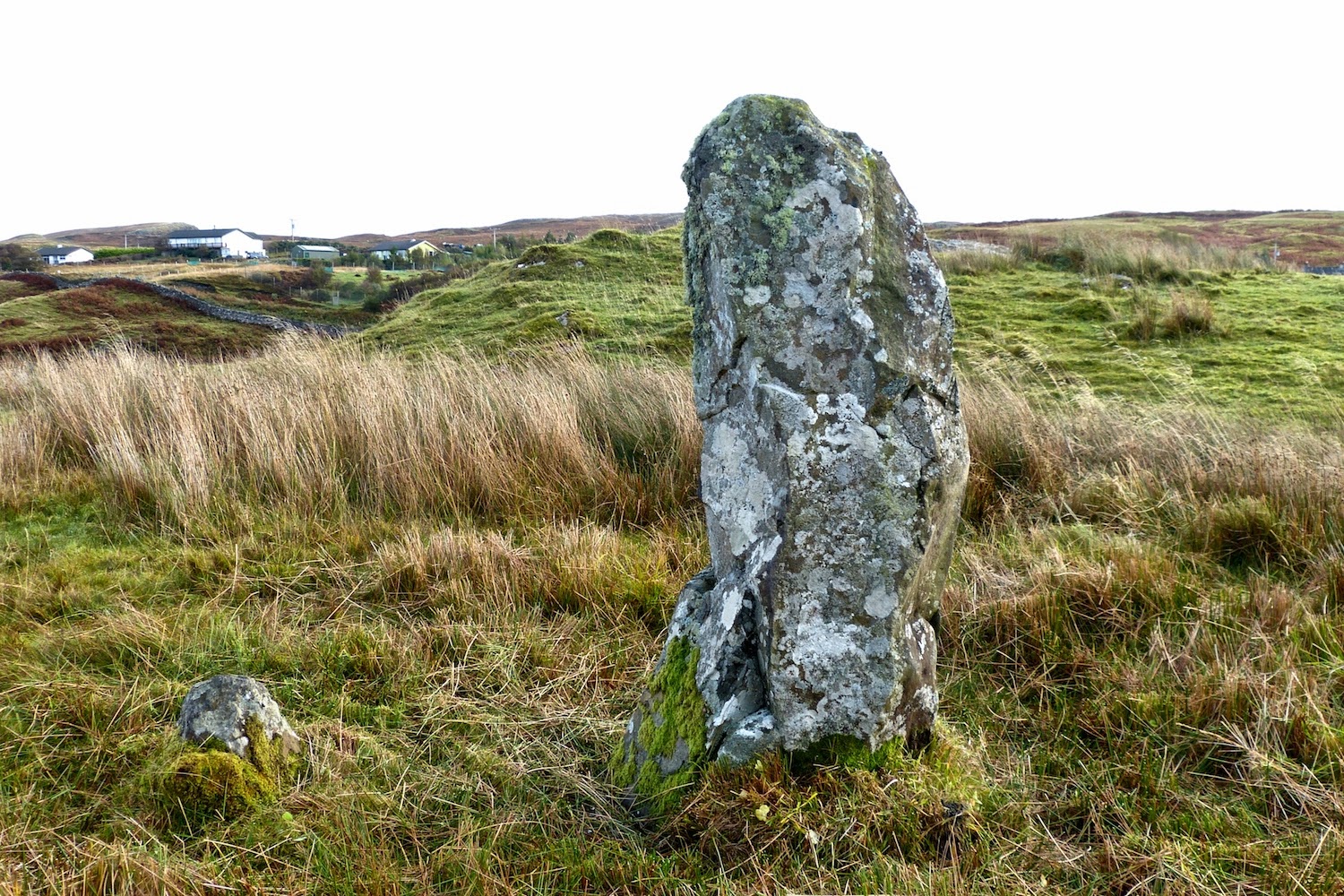 The standing stone is one of a pair.  The second, on its north side, is broken off so only a stump remains.  The alignment of the two stones is about 340 degrees, just off north.

This picture was taken from the west, looking across to the ridge where most of the houses of Branault stand. 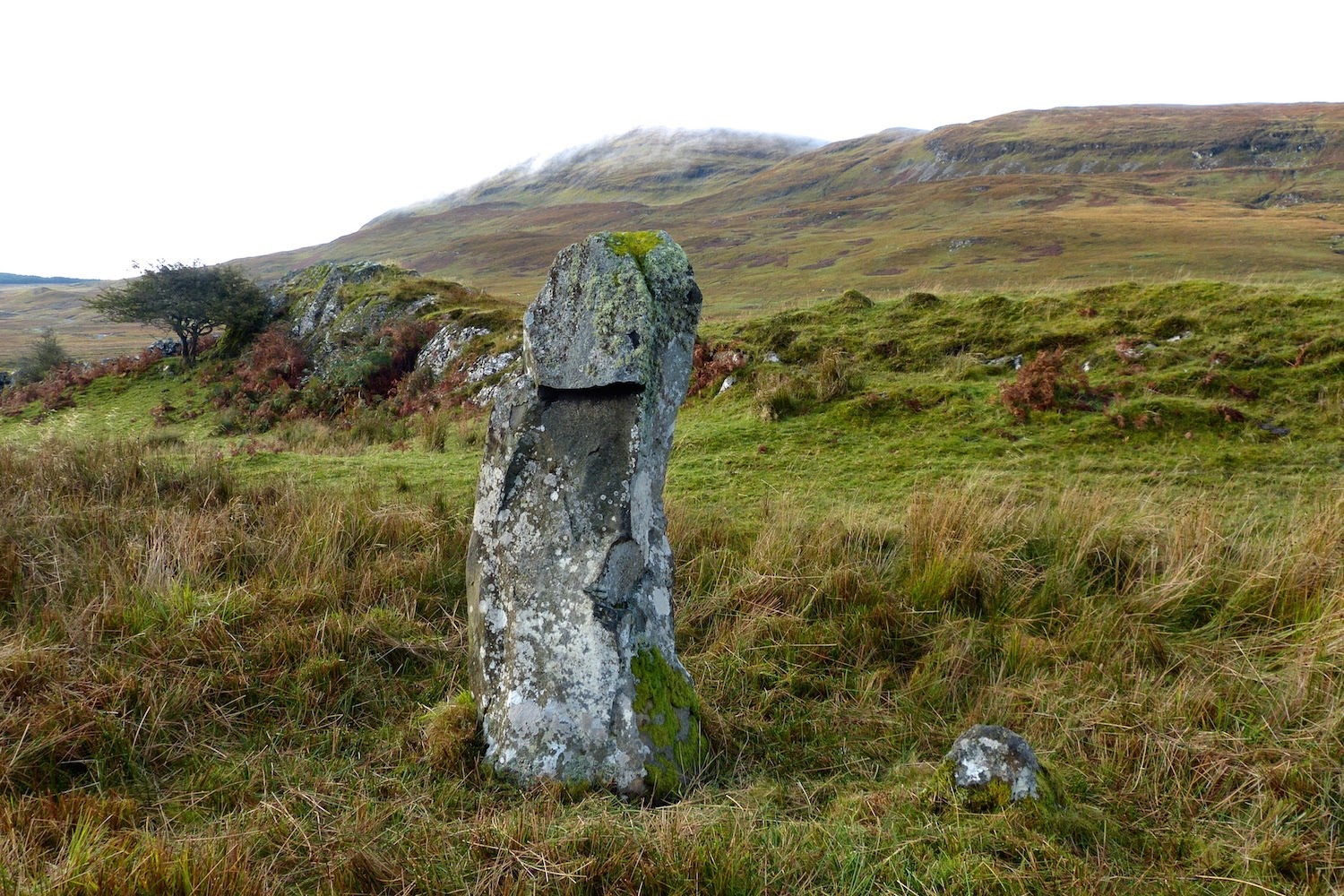 This view, taken from the east, shows that the main stone is bow-shaped.  It looks as if, at some stage, a large section on the nearer side broke off, perhaps prized away by the freeze-thaw action of ice.

As we worked, we listened to the roaring of the red deer stags up on the ridge.  The rut, having started early, is still in full swing. 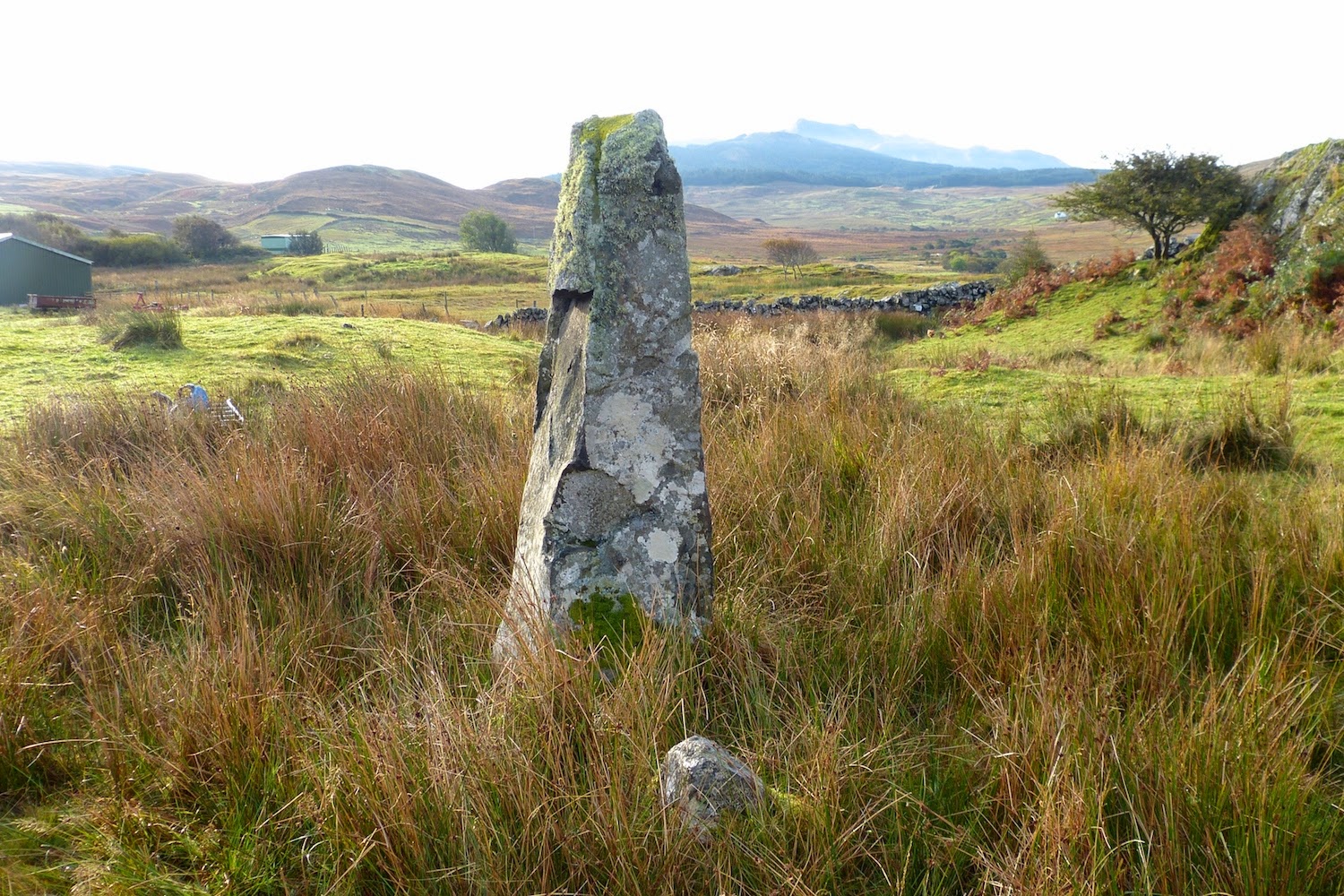 This last view is taken from the north, looking past the stones to Ben Hiant in the distance.

Not much is known about the site.  The entry on Canmore, the site of the Royal Society for the Ancient and Historical Monuments of Scotland, states that, when the area was first surveyed by the Ordnance Survey in the mid-ninteenth century, their surveyors were told that the stones were called Cladh Chatain, a name also used by MEM Donaldson.  Cladh Chatain is said to refer to St Chatan's churchyard, which suggests that a church, named after the saint, was, at one time, on or near this site, and that the stones took on its name.  This is directly comparable to Camas nan Geall, where a standing stone is also adjacent to a churchyard or burial ground.


Many thanks to Bridget & Hughie Cameron for allowing us access through their croft.
A map showing the location of the Standing stones is here.
Posted by Jon at 15:48