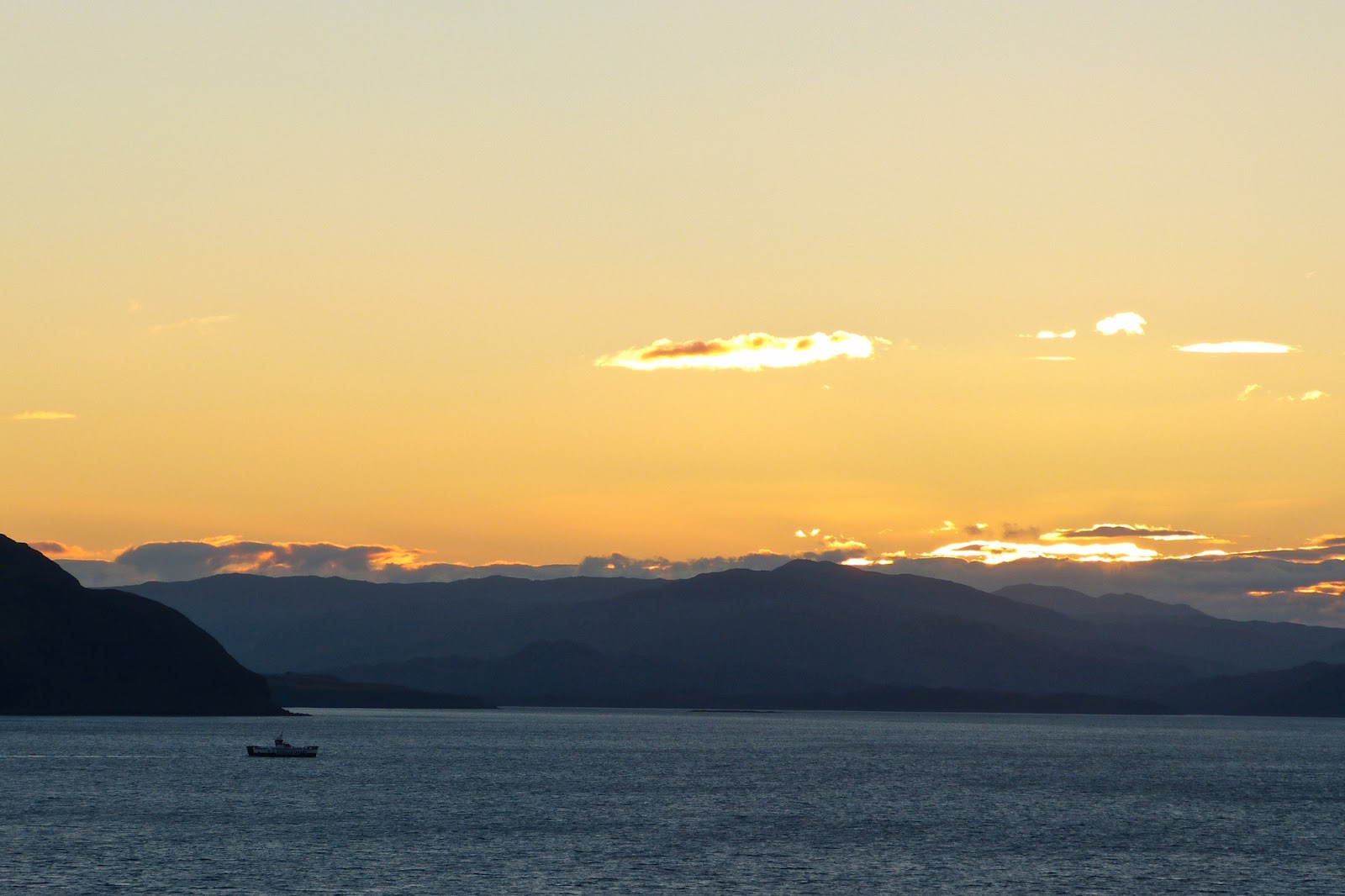 Today is A Kilchoan Diary's fifth birthday.  The first post started with a picture like this one taken this morning, with the caption, "What better way to start a blog about Kilchoan than a photo of the Tobermory ferry arriving at the pier just before eight on an October morning."  The sentence should have ended with a question mark as there are probably a large number of answers, but the post became the first of 3,009 which have attracted 1,885,289 page views from all over the world - some 20,000 have been from Russia.  The few days when a post has not appeared have been when we had prolonged power cuts. 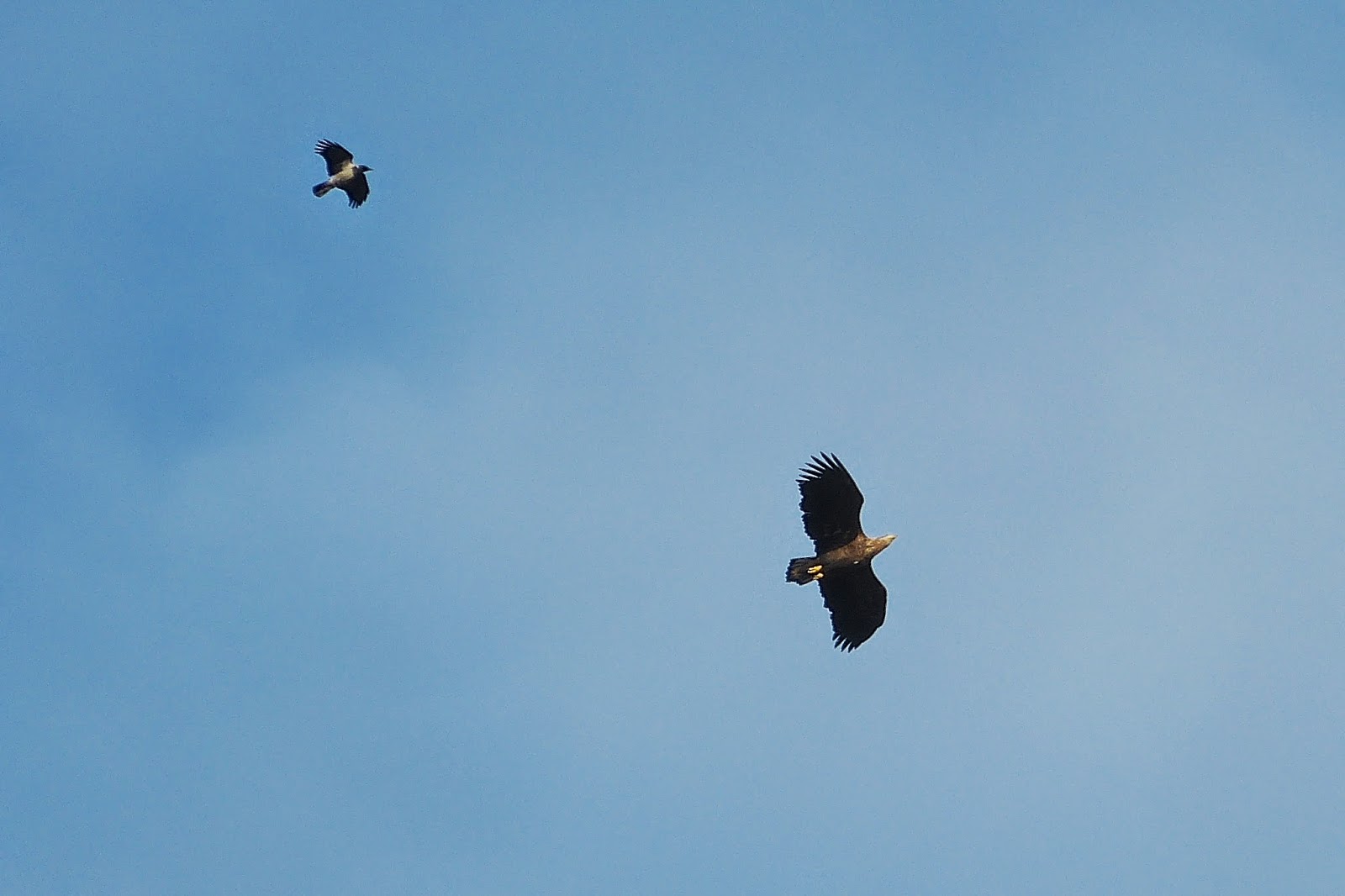 Early yesterday evening the sky was lit by an aurora but cloud intervened so all we saw was a dull pink glow.  Almost as the aurora faded, the sky cleared and we had a night brilliantly lit by stars.  The morning started with better fortune as a pair of sea eagles flew along the ridge at the back of the house, pursued by a small but noisily angry group of hooded crows. 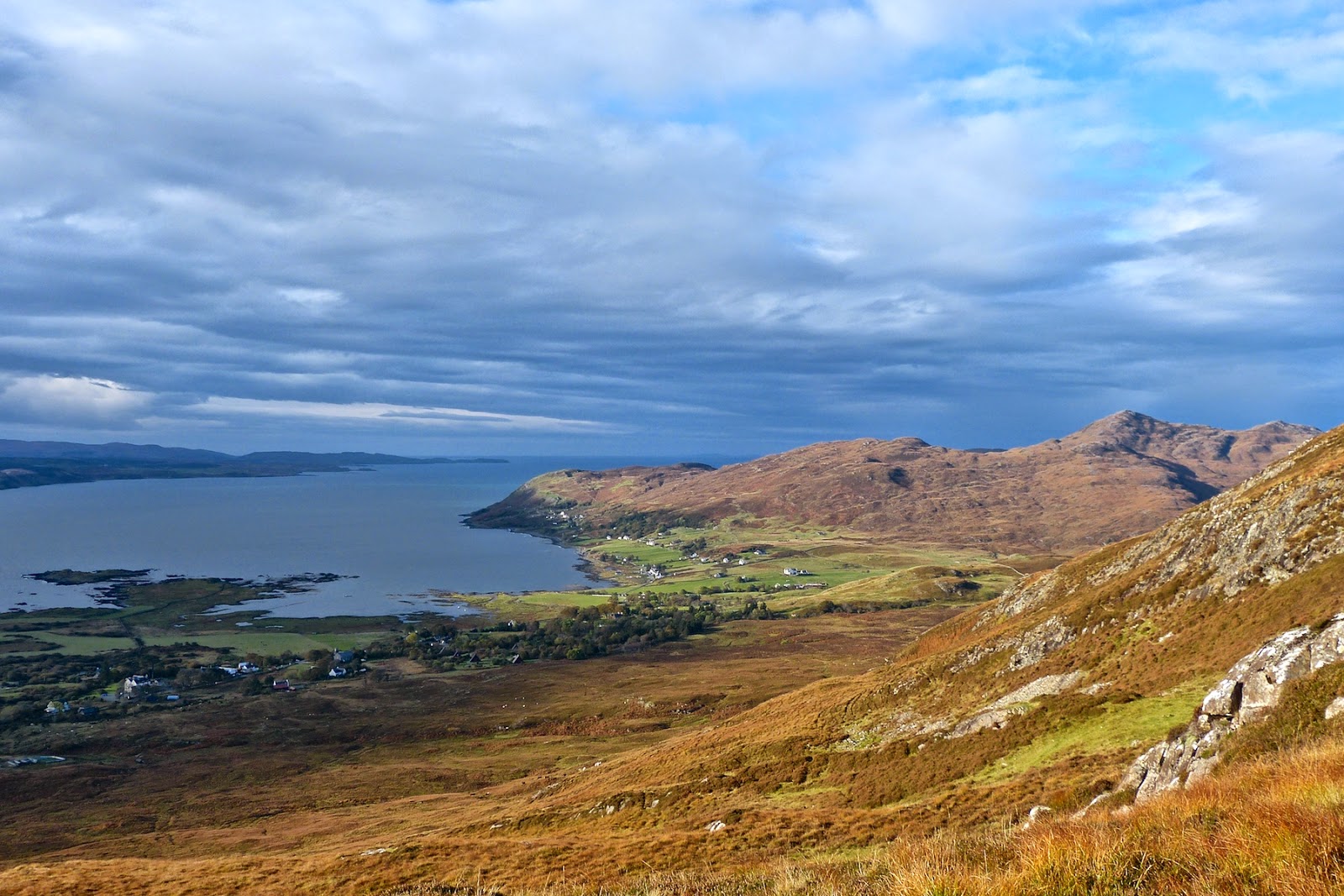 We spent half the morning in sunshine in the vegetable garden removing dead canes from the raspberries and burning them, and the other half climbing Glas Bheinn, which gives some fine views across Kilchoan, Ormsaigmore and Ormsaigbeg.  The climb was accompanied by the distant roaring of the Ardnamurchan Estate's red deer stags in their rut, though we didn't see any until.... 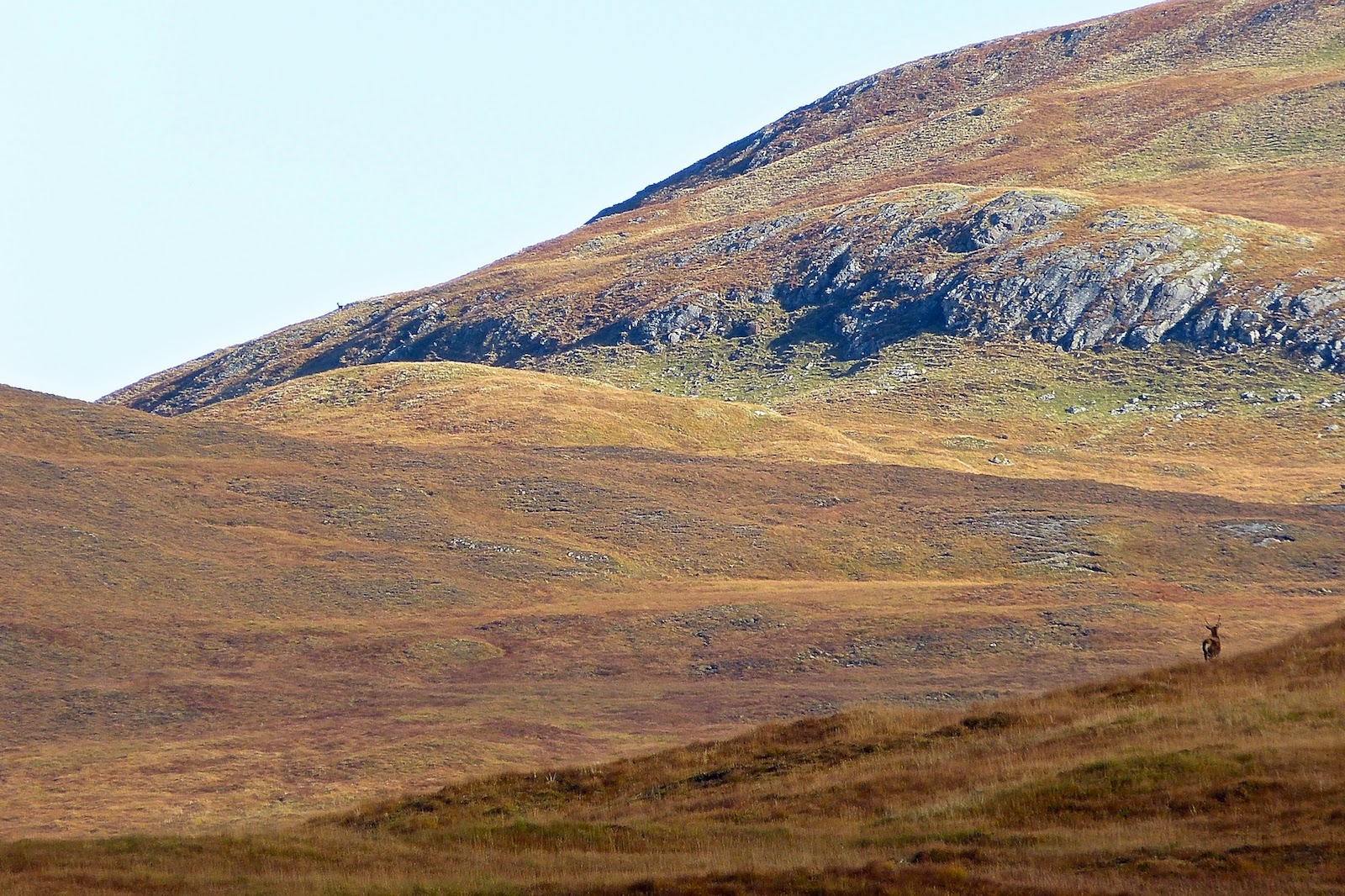 ....we were on our way down, when a single stag caught our attention by roaring at us.  We later saw that he'd collected a small group of hinds on the middle slopes of Beinn an Leathaid.

Conditions were ideal for walking, with sunny intervals and a cooling easterly wind.  The air was wonderfully clear, perfect for photographs. 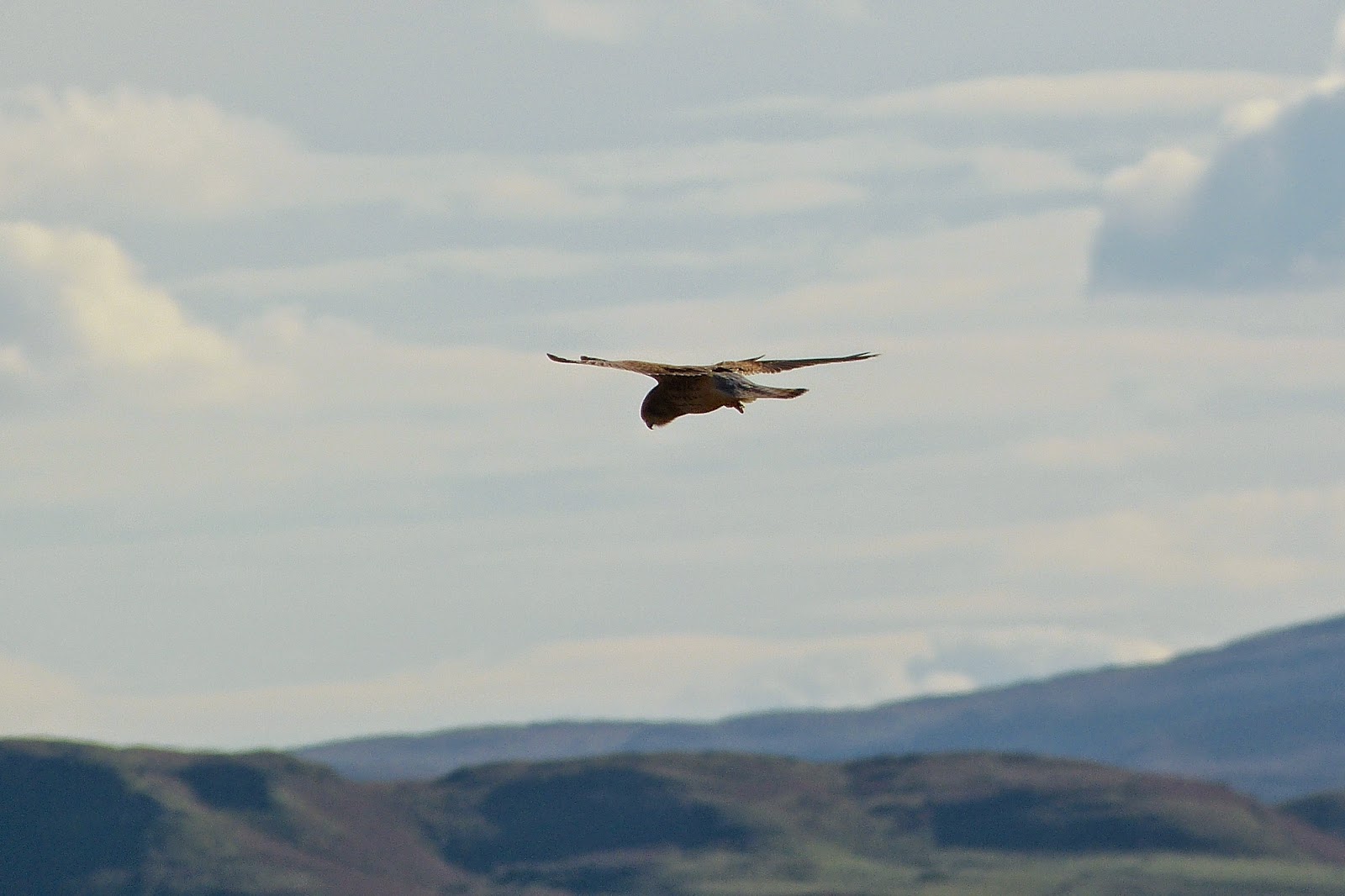 As we sat on the front terrace for lunch a kestrel appeared and balanced in the air in front of us.  Kestrels are fairly regular visitors along Ormsaigbeg.  What we'd really like to see is one of the merlins which, we've been told following the publication of Peter Southern's pictures, have been seen fairly frequently on Ardnamurchan Estate land.
Posted by Jon at 16:25