The Company of Wildlife 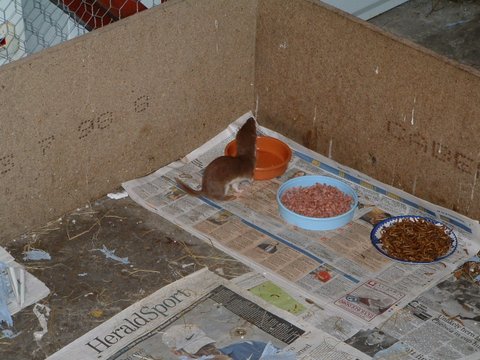 On my visits to Kilchoan, after enquiring how I am managing, many people ask about the hedgehogs and often enquire about Wilfred the weasel.

Well, Wilfred is doing very nicely, thank you! After carrying out his primary duties of controlling the mice in the workshop, wash-up and the barn [garage] he often waits for me to either collect or put out the hedgehogs' evening meal and is becoming quite a poser. The first I know that he is around is the rustling amongst the empty feed bags and then a little head pops up over the hedgehog barriers to check that it really is me in the room. He then seems to wait for permission to have some mince. 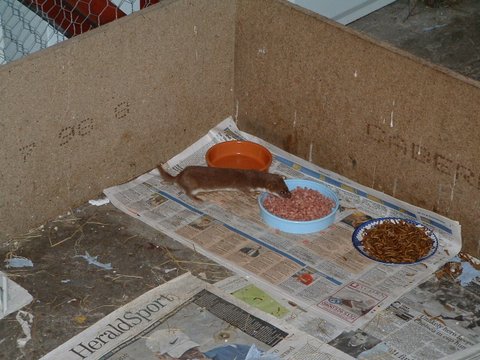 The first time that I photographed him with flash, he was so fast that all I got was a tail disappearing over the barrier to safety. However, he soon worked out that I hadn't moved and he was in little danger; so it was back to the mince. This time he seemed to pose and wait for the flash before vanishing, only to return very quickly for the next photo. This was repeated several times until he was either full or fed up with the game. 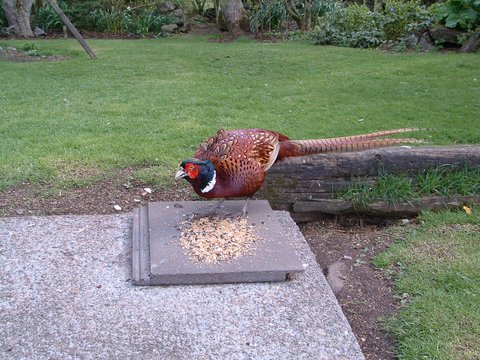 Most mornings, when I come to open the back door there is a deputation of pheasants and smaller birds waiting for breakfast, just outside the door keeping their feet dry on the mat. The pheasants have become so friendly and trusting that they will readily take seed from the hand.  Anyone visiting will think that I have lost the plot, as I regularly have a conversation with these birds. I can assure readers that I am not ready for the "Funny Farm" yet! As yet, I haven't lost an argument with a pheasant!! It seems that all wildlife recognise people that feed them and if a voice [sound] accompanies the production of food they are more relaxed. 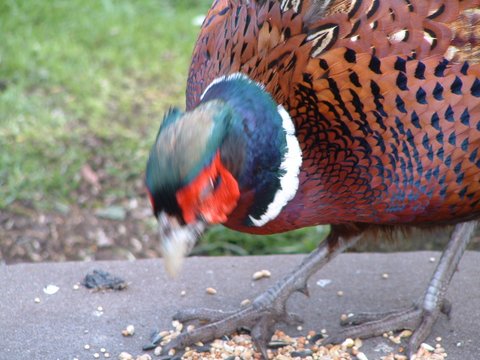 So what of the hedgehogs? Four have been released and have disappeared to continue their lives in the wild, while I am about to prepare the one that Jenny Chapman brought over for release. This little girl was very underweight, but feisty and was one of Tonia's last autumns juveniles. She has now doubled in weight and appears to have cleared the lung worm that was making her cough. So it's back to the wild for her!

Having talked about the birds waiting outside the back door for breakfast; I often have the same occurance with hedgehogs in the evening. They have worked out what time I appear to replenish the outside feeding stations and it is not unusual to find one or two hedgehogs waiting outside the door for the food to go out. I usually give these ones a special treat by giving them their own dish while I am putting the rest out. It is at this time of the evening that the "Generator Shed" is opened as a refuge for animals that are caught in bad weather, with food and water as well as a warm box to sleep in if they want. About a week ago I found that the box was occupied by a large adult hedgehog.  This is not unusual, but what is, is that she is still there and appears to have claimed the box as hers. I have not disturbed the animal as I have the suspicion that there may be a recently arrived family in the box. So, it's a case of leaving the animal in peace as far as possible, and wait to see what emerges in a few days.

I will be delighted if in a couple of weeks, mum appears with her brood, but for now I must be patient.

Many thanks to Tony for story and pictures.
Posted by Jon at 16:29