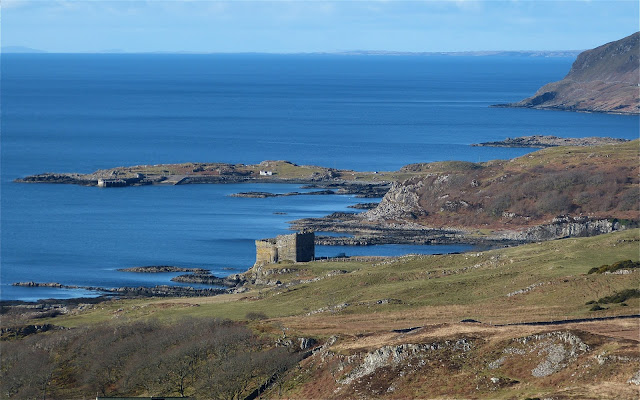 At April's meeting of Ardnamurchan Community Council, Donald Houston of Ardnamurchan Estate announced that a programme of work was about to start at Mingary Castle which would ensure that the castle, at present in an advanced state of decay, would be saved (see post here).

Work has now begun on the huge task of researching, recording, conserving, stabilising and possibly, at a later date, refurbishing the castle.  As a small contribution to this, the Dairy has been asked to write a blog describing what is happening on site.  This was like asking a child whether they would like the key to a very large sweet shop!

Detailed studies of the castle have already been carried out.  A new history of the castle, using primary sources, has been compiled.  Archaeologists have produced an initial report, and a second one, detailing the plans for excavation, is due to go to Historic Scotland next week.  All being well, a full programme of excavation should follow very shortly.

The Mingary Castle website will give the public full access to all plans, histories, archaeologists' and architects' reports, and all other documentation.  It should be up and running shortly.  In the meanwhile, the blog has 'gone live' today.  It's accessible at mingarycastle.co.uk.
Posted by Jon at 16:01