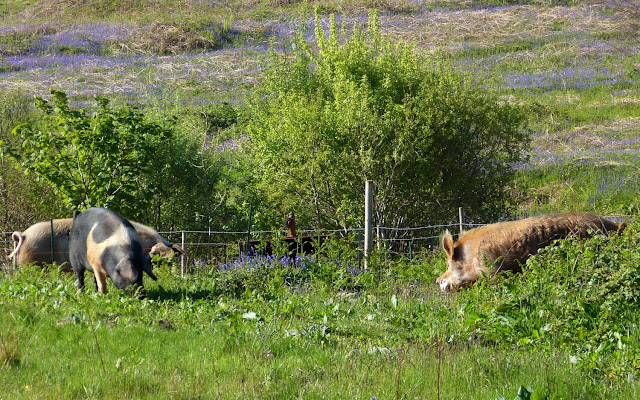 It started the same way it did last time (see April post here), with the same Portuairk saddleback sow leading Ginger, the Portuairk boar, across the burn to the Ormsaigbeg pigs' pen: and, once again, she stuck around just long enough to get Ginger angry about the attention Bobby was paying her.... 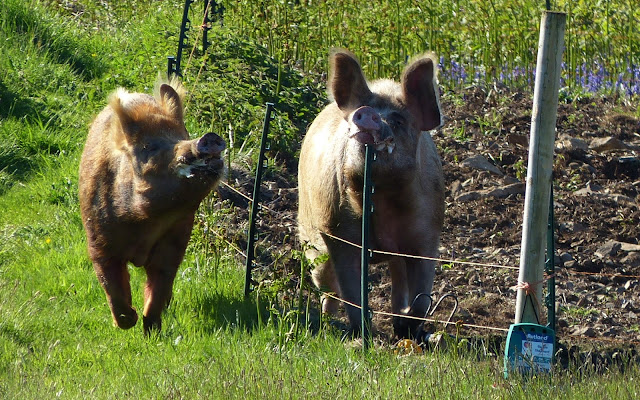 ....leading to the inevitable froth-jawed confrontation between the two boars - Ginger on the left, Bobby on the right.

With Trevor Pott's Ardnamurchan Campsite full for the half-term break and visitors and their children promenading along the Ormsaigbeg road, swift action had to be taken taken: Hughie was called, and he, in turn, advised Portuairk pig owner Angus-John that his pigs were out and creating mayhem. 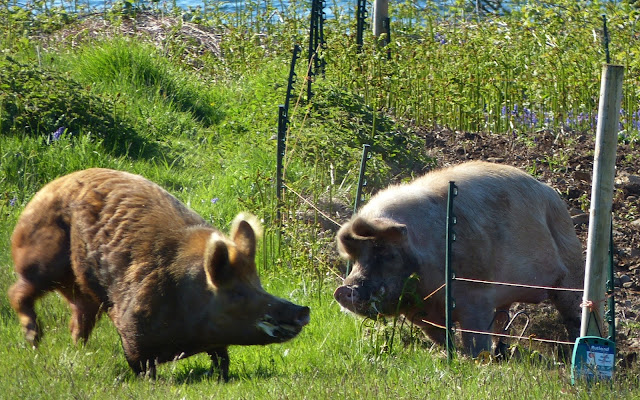 This time Bobby's temper snapped first.  Having twice touched the wire and had a shock, he finally charged through it.... 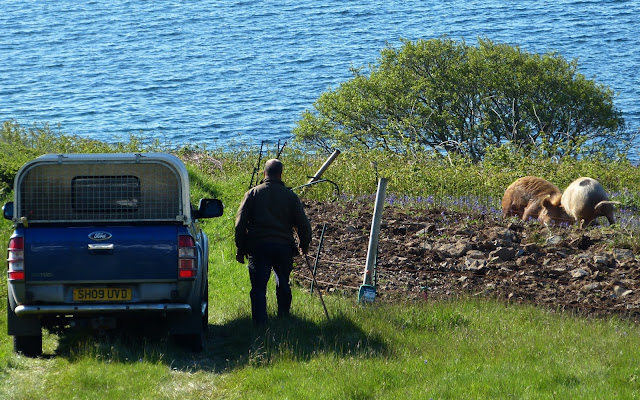 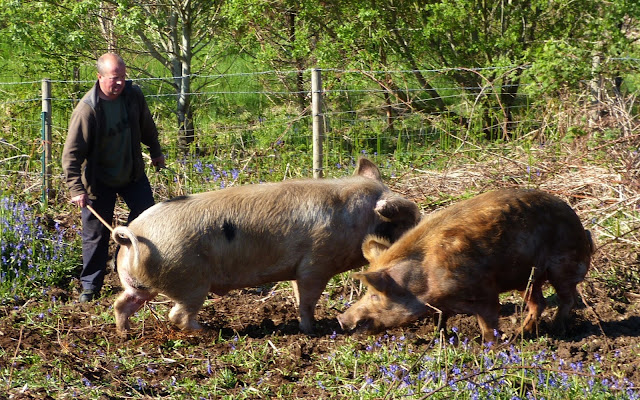 Hughie's valiant attempts to separate the boars - by that time going at each other hammer-and-tongs - had little effect, other than to break Hughie's favourite stick. 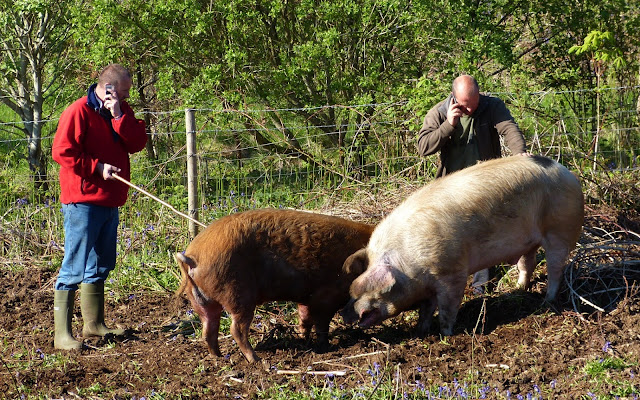 Soon after, Angie arrived.  Since this is the era of the mobile smartphone, it was felt necessary to make a few consultative calls to America before attending to Bobby and Ginger, who were, by that time, increasingly bloody and bruised.  Ginger has a bad leg, and Bobby is too portly to be a good fighter, so the fight was heading towards a standstill. 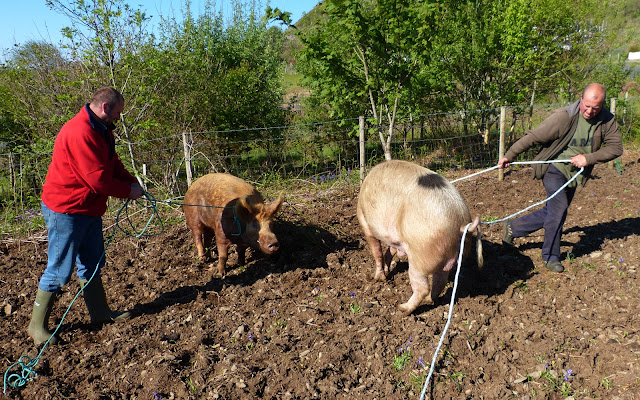 After several further attempts to separate them and some more consultative calls, two lengths of rope were obtained and lariats made.  The pigs, wild west style, were lassoed and, bucking and protesting, finally dragged apart. 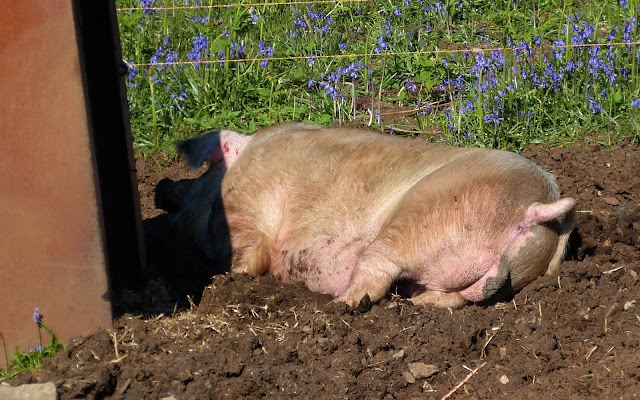 Bobby went back to his house, collapsed, and had to be revived by having a bucket of water poured over him.... 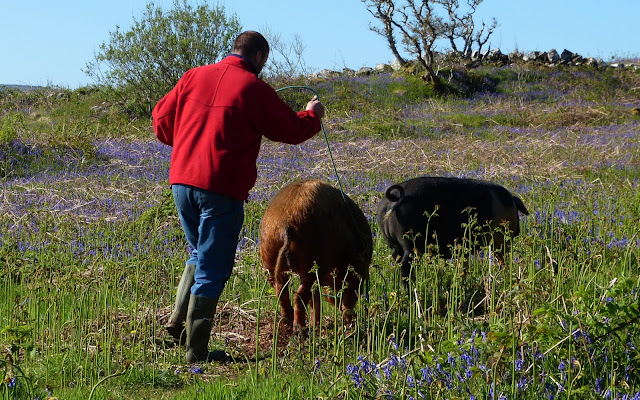 ....while Angie-John led a limping, exhausted Ginger away - in company with the Portuairk saddleback sow who had come back to enjoy the chaos she has caused,... 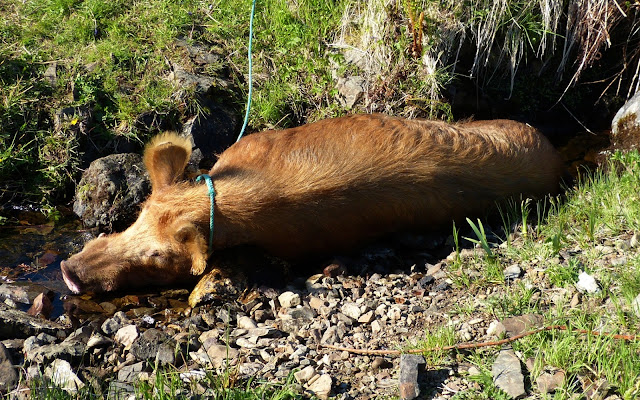 ....but the poor chap collapsed in the burn and couldn't be moved for half an hour.

There's never a dull moment in Ormsaigbeg.
Posted by Jon at 10:23