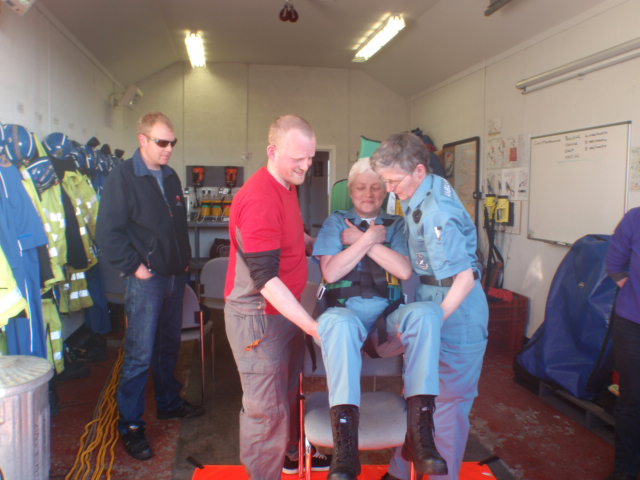 After many weeks of planning, two local rescue organisations recently got together for a weekend of joint training - HM Coastguard and Lochaber Mountain Rescue. The venue was Kilchoan. Coastguards from bases at Corpach, Salen, Mallaig and Kilchoan took part. The weekend was an outstanding success. Everything from the workshops to rescue and medical scenarios went without a hitch. The accommodation and especially the food (prepared by David from Glenborrodale Castle) was mouth wateringly brilliant.

The Saturday sessions (all on the shore and sea cliffs) included creating anchor points for rescue equipment, abseiling, basic life support during an incident, casualty packaging and water rescue techniques. Saturday night was made up of a hot buffet fit for royalty followed by a quiz which was hilarious - as you would expect when fifty Coastguards and Mountain rescuers get together.

Sunday began with many hangovers which were soon blown away by a cold wind up on the hill outside the village. The first scenario was the teams being tasked to a light airplane crash across a gully. The group were shown how to rig a system to transfer personnel across a wide gully.  Personnel and equipment, including stretchers, were soon making a mid air-transfer to the other side. Casualties, made up to have various injuries and in various locations, had to be treated on-scene and transported back to base.

As the main organiser I would like to thank the Management and Staff of Glenborrodale Castle and the Kilchoan House Hotel who helped to make it a truly memorable event, and my thanks also to Sharon MacLachlan without whom the event would never have happened.


Many thanks to Phil Wren for report & picture.
Posted by Jon at 10:39