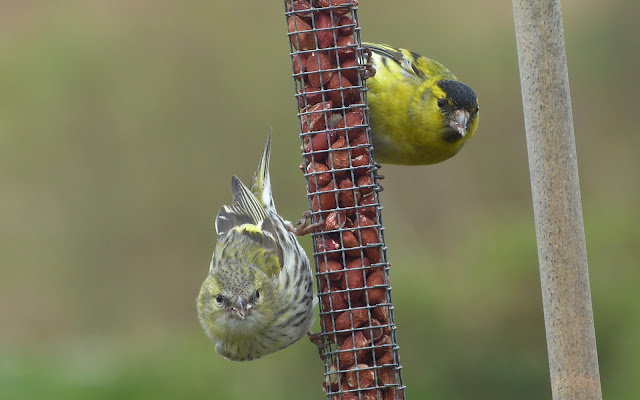 One of the big changes we noticed amongst the wild bird population when we returned from Canada was the big increase in the number of siskins at the peanut feeders.  During one lunchtime a couple of days ago we counted eleven siskins at one time.

At this time of year they're in their breeding plumage and the males, in particular, are beautiful.  They're also a bird with.... character. 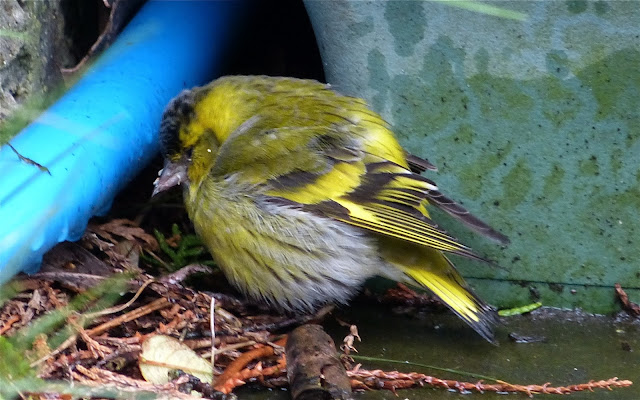 We'd heard reports from elsewhere in the village that a disease was affecting siskins: now it's arrived with us.  A couple of days ago we saw a female walking on the ground with her feathers fluffed up, today it was this male who couldn't fly more than a few yards, and ended up standing dejectedly beside a flowerpot.

A search on the internet suggests that siskins suffer from diseases brought on by Salmonella and Escherichia - E. coli - with E. coli a strong suspect as it is most infectious in the months from March to June.  A site run by the Veterinary Science Division, Avian Health Unit, Ayr - here - describes the symptoms: "the birds appear fluffed up, reluctant to fly, appear to be breathing heavily and may look as if they are having difficulty in swallowing."  This describes our birds exactly.  An alternative is that they have the same disease as the greenfinches, Trichomonosis, as described at the BTO site here.

We've been through this with our greenfinches: they're only just beginning to recover.  There's no doubt that these diseases are encouraged by our drawing the birds to to bird feeders, which then help to spread the infection.  We now face the prospect of a summer without siskins, and it may be our fault.
Posted by Jon at 11:34