On our return to Kilchoan yesterday we heard the very sad news of the death of Joey MacKenzie of Kilmory.  This is the tribute read by Joey's niece, Anne Virdee, at her funeral last week. 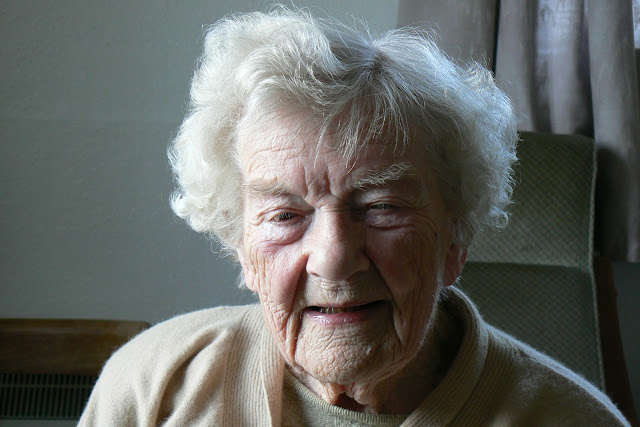 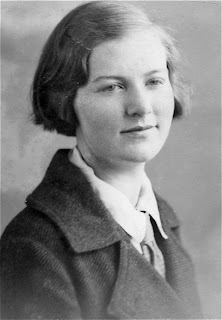 Johanna MacKenzie was born in Kilmory on 7th January 1915 the fourth child of Duncan and Christina MacKenzie. It was not an auspicious time to be born – the Great War was underway and the enormity of what was happening must have been dawning. Joey – we always called her Joey, she seemed not to like the name Johanna – was much the youngest child. When she was born her sister Annie was 14, Maggie 12 and Hugh, 10. Early photographs show her to be quite beautiful – tall and slim with thick fair hair. Her father died when she was only 11 years of age but she still managed to win a bursary and continued her education in Tobermory High and Oban High then to Jordanhill College of Education where she completed her Teacher Training. When she qualified in 1936 teaching jobs were hard to come by and her first job – here in Kilchoan – was, as what is now called, a supply teacher. There may be those present today whose fingers tingle at the memory. One dinnertime during her time here there was some swinging by pupils on a gate and the gate broke. Joey had to punish the miscreants by warming their fingers – a euphemism for belting them. Many years later when I started teaching in very rough school in Glasgow Joey presented me with a Lochgelly. Now the Lochgelly was the king of the tawse – thick, hard, leather with thongs at the business end. It could inflict real pain and was actually illegal to use in a classroom. In case the owners of tingling fingers are now feeling badly-done-by Joey’s Lochgelly had never been used. It had to be blackened with boot polish before use and hers was pale and pristine. On that occasion she must have made use of a standard issue strap which was as thin and effective cardboard.

Her stint in Kilchoan was at the beginning of her teaching career which took her to many different schools in many locations. In 1941 she took up a position in Drimnin which was then supplied by steamers from Oban and had no proper road. She had to walk there along a rough track, alone, carrying her bags. This was when the Second World War was at its most gloomy and uncertain and she was still a shy young girl. Drimnin was unknown to her. It must have been so daunting. But that was what she had to do and she just got on with it to the best of her ability. This was characteristic of Joey. She accepted what was in store for her and - without complaint - just got on with it - a quality which was much appreciated by those around her in these last difficult weeks and months. In 1954 after spells of teaching in Inverary, Paisley and Acharacle, she went to another one-teacher school in Bridge of Orchy. We often visited her there. I remember how close the schoolhouse was to the railway-line, how cold it was, and how conscientious Joey was. It was all hard slog and Christmas concerts. From there she went to Glencoe Village, then on to her last job in Ardgour. She retired in 1975 at the age of 60. Her brother Hugh was shocked. “What!” he said “She’s only a lassie.” Not quite, but that was how Hugh, the older brother, saw her – or perhaps he knew that she had a lot of life before her.

There were many strands to Joey’s life but it was all done quietly. She never drew attention to herself. As a child she hunched her shoulders rather than be taller than others – a tendency which never left her, but she was very much an individual. Joey did her own thing. At home after meals when everyone else was having a cup of tea and a digestive Joey had coffee and a cigarette. She read constantly – all her life. Much of our early reading material was from her ‘book club’. A book would arrive each month each with similar design on the differently coloured cover - and they were excellent books. After she retired she wrote, poetry and prose. She liked to bake – she made bread well into her nineties. She played the piano, not marvellously but she could knockout a tune until the old piano in Kilmory became unplayable. She was the first woman in the family to learn to drive and own a car; she still drove from Kilmory to Kilchoan when she was 90. She built a house for herself. She loved to travel – mostly to Scottish hotspots in Canada, Australia, and New Zealand where far flung relatives were to be found but she also visited Italy and Mediterranean resorts. Her companion on these journeys was usually her cousin Lily from Glasgow. Tall, droll, Lily who made Joey laugh – and Joey loved her for that. Joey loved company and conversation. She was never the life and soul of the party – she was too self-effacing for that. She was the one who listened and laughed – and told the story to a select few later.

Teaching in one-teacher schools , where she spent most of her working life, can be solitary – but she had her pets. There was Gary the corgi. I doubt the Queen missed him – he was quite naughty – but much too loved to ever be replaced. After retirement there was a succession of bossy, well-fed cats. And of course there was Polly. Polly was a pet lamb who survived to old age without recognising her sister sheep – except at tupping time. The rest of the year she camped near Joey’s waiting for titbits. But at least Polly repaid her pampered existence by producing twins every spring – except when she had triplets. Polly was a one off.

Though her teaching career and interests were important to her, Joey’s life was defined by the crofting family she was born into and the crofting community in Kilmory where she grew up. When Joey was in her eighties I asked her about her most vivid childhood memories. There were two incidents that came to mind. The first was a spring day when she came home from school in Kilmory and found the women washing blankets by the burn. They had lit a fire to heat the water and she had to tread the blankets in a large tub. “Like they tread the grapes in France,” she said. She remembered the warm, soft, feeling of the water and blankets on her bare feet and the warmth of the women working together. The other occasion was quite different and must have been at the beginning of her first term at Oban High School. She was on the pier in Oban when the boat docked carrying evacuees from St. Kilda. She was young and at the time not fully aware of what she was witnessing but it left a lasting impression. She said, “I couldn’t understand why all these grown men were crying. Grown men crying,” she repeated. That was late August 1930.

Joey was unique and could look back and reach with her fingertips to what we can only read about. She was born at a time that presaged great change – everywhere. She was the last of her generation and the first child in Kilmory to be born in a house with stairs and a slate roof. The traditional stone, thatched cottage where her siblings were born had become – or was in the process of becoming – a byre. With a corrugated iron roof it still stands a monument to another way of life – a way of life to which Joey was a link – a link we have now lost. And though there can be no sentimental longing for a way of life that was hard and uncompromising there was a special quality of goodness and decency in those who lived life which must not be forgotten. And today as we honour Joey and celebrate her life I should like also to remember her sisters and brother – Annie, Maggie and Hugh. Annie and Hugh who never left Kilmory and Maggie who was a teacher like Joey. Their lives lit ours and to all of them we owe an abiding debt of gratitude. 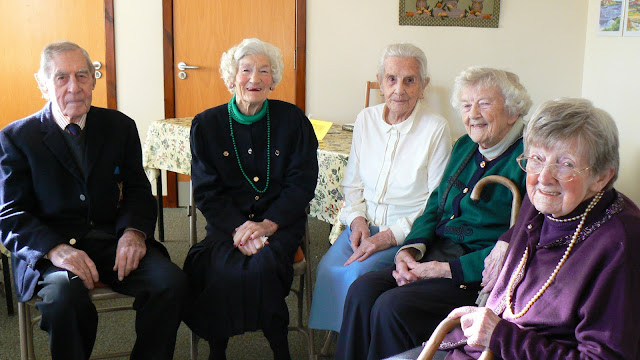 Joey, second from right, at a luncheon at the Community Centre in January 2011.
Posted by Jon at 11:27