The Power of the Potato 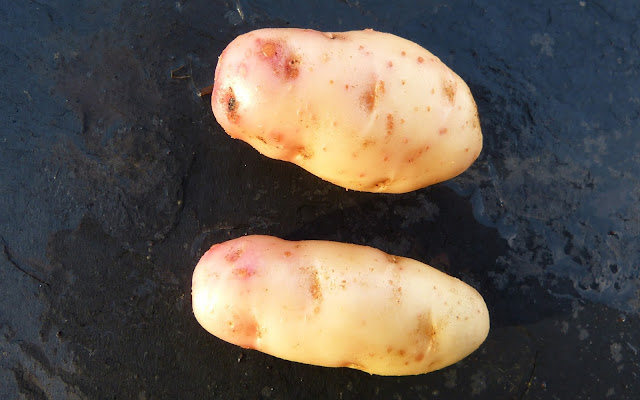 Much as we might like to, we don't grow many potatoes in our vegetable garden simply because there isn't room but, every year, we do put in a few.  This year, Pat MacPhail, who owns Tigh an Uilt croft in Kilchoan, gave us some Anya seed potatoes, small ones like these two which, together, weigh about two ounces (56gm). 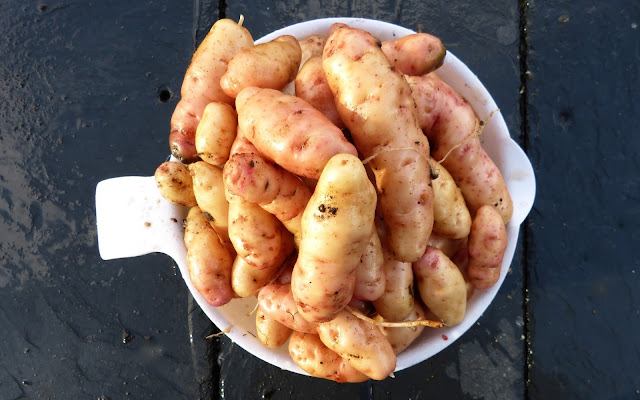 We dug up the first two plants yesterday, and this is the result - two pounds and two ounces of potatoes (just under 1Kg), a seventeen-fold return.  Imagine a bank account giving that!

Little wonder that Highland people became heavily dependent on this crop so when, in the 1840s, blight destroyed whole fields of potatoes, the effects on the crofting population were disastrous.  They led to a mass-migration from Scotland to places such as the US, Canada, Australia and New Zealand - see Wikipedia account here.

The blight hasn't gone away.  A couple of years ago the last field in Ormsaigbeg planted to potatoes was affected, the Golden Wonder variety suffering worst.


Pat MacPhail has an apartment to let in her croft house, details here.
Posted by Jon at 17:05