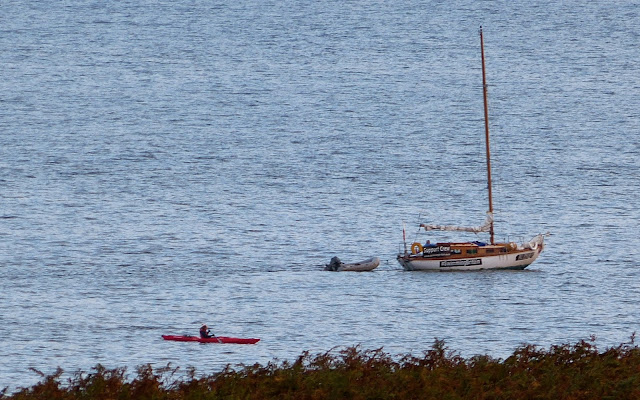 Many thanks to Pete Holmes for emailing information about this yacht which we saw passing below the house at about 6.00pm last night.

Pete says, "I thought you might be interested in this swimmer we found at Bay MacNeil en route to John o' Groats from Land's End.

"I was on a night paddle with Geoff Campbell and Jacqui last night in and around Ardnamurchan Point and Bay MacNeil. We were intrigued to see a yacht slowly come around the point and into the bay, setting anchor in the dark in quite a swell at gone 8.00pm. We wondered whether this was a boat in trouble or even smugglers, but it turned out to be the support boat for an endurance swimmer heading from Land's End to John o' Groats.

"Sean Conway is raising money for a charity that helps child victims of war. He seemed in good spirits, although disappointed he'd only done ten miles. I think he was hoping to head off early to make the most of the northerly tide - but he may have had to back track the boat to get to wherever he stopped swimming last night.

"See his blog: http://www.seanconway.com/lands-end-to-john-ogroats.html and look at the blog which gives a sense of what life is like on this mission, and http://www.bbc.co.uk/news/uk-england-23154595"

If you can't see the swimmer in the photo it's because he's behind the kayaker.


Pete Holmes has his own business, Rural Skills Training - his website is here.  He can be contacted at peterholmes.training@yahoo.com
Posted by Jon at 10:34