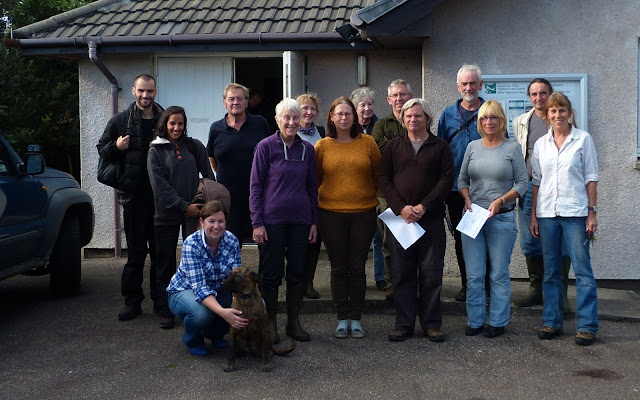 An international group of students from as far away as Portugal, Holland, Swordle and Portuairk gathered yesterday morning at Pat Glenday's Kilchoan Learning Centre for a course run by Phil Richardson and Cara Jones of Archaeology Scotland.  The Adopt a Monument scheme encourages people to take an interest in their local archaeology - and West Ardnamurchan isn't short of archaeology. 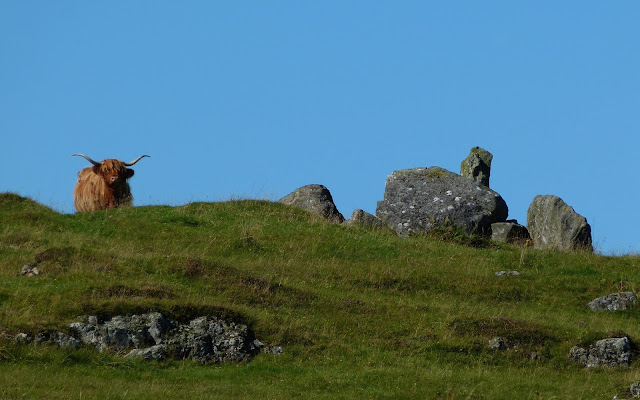 The course was largely practical, to show us the sort of things we could do.  To give us an idea of how rich this area is, we started in the morning with a visit to the 6,000 year old neolithic cairn called Greadal Fhinn in Ormsaigmore.  We were greeted there by a reception committee of highland cows, though Davie Ferguson had been kind enough to remove his bull before our arrival. 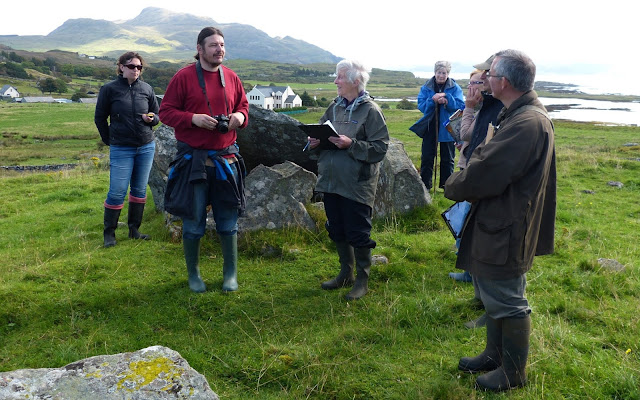 Course leaders Phil, in red top, and Cara, at left, described the historic monument and some of the problems of interpreting what is visible today.  There are two grave areas, a cist grave in the left foreground and the much larger passage grave behind Phil, which are of different ages.  They would originally have been covered with a mound of stones but these have been re-used in the local houses and walls. 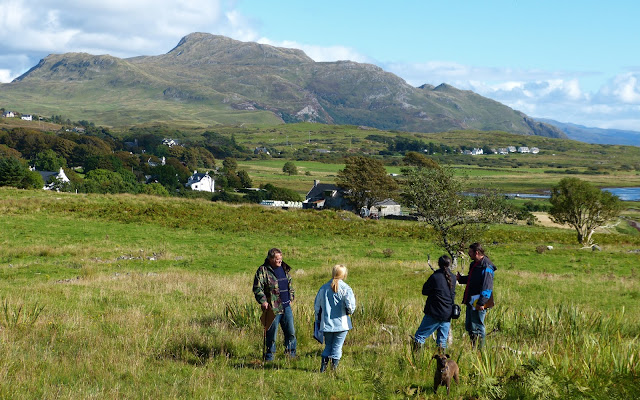 In the afternoon we spent time in the clachan of Ormsaigmore.  This lies between Greadal Fhinn and the road.  Although they aren't easily visible, the group soon found a number of houses, byres and enclosures.  A GPS machine was used to fix their positions, and the group learned how to measure and draw plans of the structures.

This sketch of the passage grave was done by artist Claudia Adro who is currently living at Resipole but comes from Portugal.  Her website is at http://cargocollective.com/adro.

At the final session Phil and Cara agreed to return to run a course on how to draw maps of areas such as the Ormsaigmore clachan.  In the meanwhile, it is hoped to set up a local archaeological group to start the huge job of finding and identifying the many archeological features scattered across West Ardnamurchan, with a view to building a database which can then be sent to Archaeology Scotland.