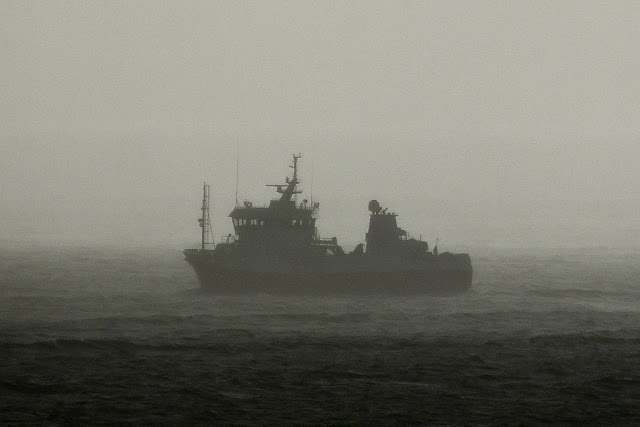 It has been a disappointing month - or more like six weeks - since the last 'Ships in the Sound' feature. Poor weather hides passing ships, as do the long nights, when all we see are distant lights moving steadily up or down the Sound.

This is the Viktoria Viking disappearing into the murk. She's one of the well boats which has been ferrying top quality, Kilchoan-nurtured salmon from the Maclean's Nose fish farm to Mallaig. 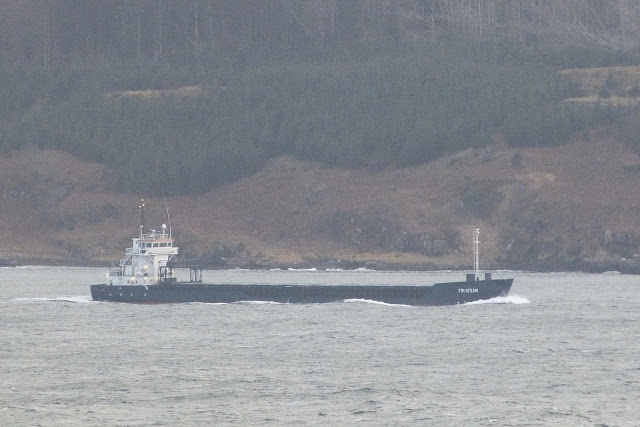 Many of the month's passing ships have been old friends, such as this one, Fri Ocean - though one is always aware with this ship that she was one of three that have stranded themselves on the shores of the Sound in the last decade or so. 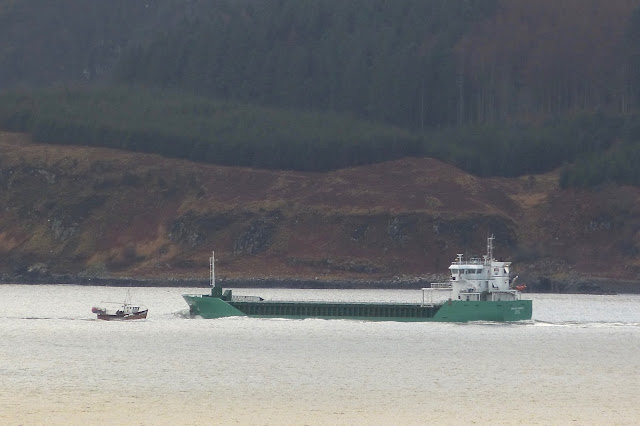 The Arklow boats are among my favourites. Like her sister ships, the Arklow Forest shows all the signs of a crew's pride in their ship, so it's good to see her deep laden.

She's passing one of the Tobermory-based creel boats, the Dawn Treader 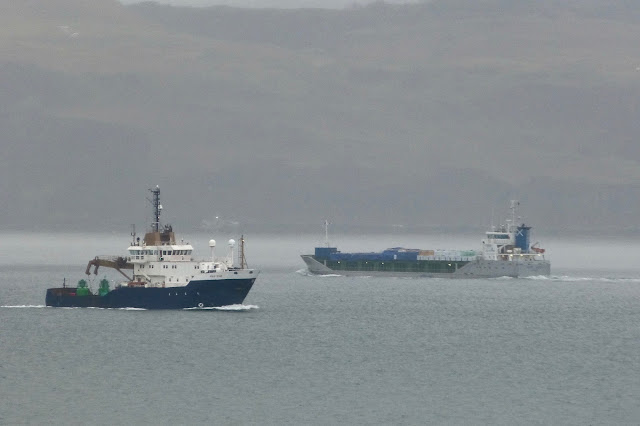 Some of the working boats which have passed us are also frequent visitors. The ship to the left is the Pole Star, one of two Northern Lighthouse Board vessels employed in servicing the many lights around the shores of Scotland and Northern Ireland - there are two green buoys visible on her aft deck. Passing her in the opposite direction is the Scot Isles, one of the Romford-based Scotline's many vessels which ply these waters. 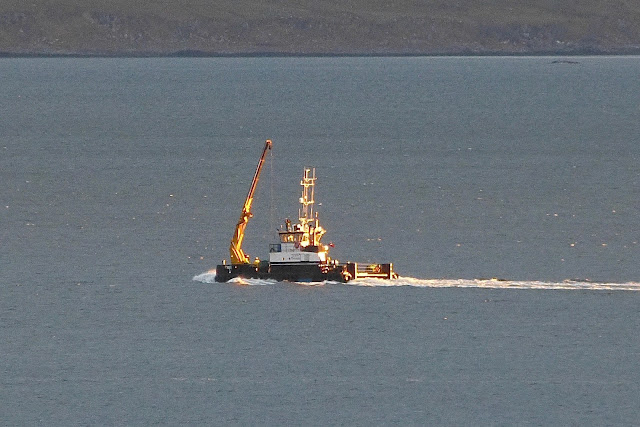 In early January, Coastal Hunter came in to the area around Maclean's Nose where the new Marine Harvest fish farm is sited, though there is also a wave turbine being installed near the fish farm, and work is ongoing with this. There's more about the turbine here. 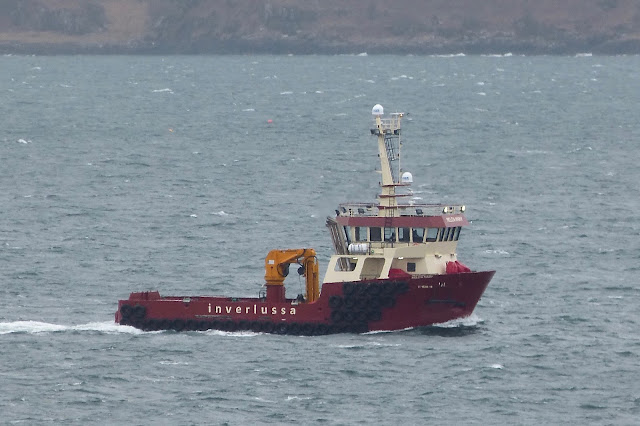 The Helen Mary also came in to Maclean's Nose as part of a trip which saw her leave Kyle of Lochalsh for Tobermory, sail on to Maclean's Nose, and then back to Kyle all within a 24-hour period. She's owned by Inverlussa Marine Services Ltd, a Scottish company whose marine services arm grew out of an original fish farming business - more about them here. 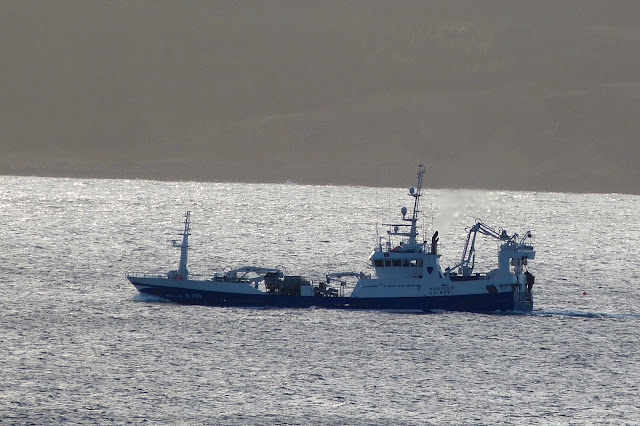 Some other familiar ships have been shuttling back and forth. This is the Irish trawler Havilah, N200, which.... 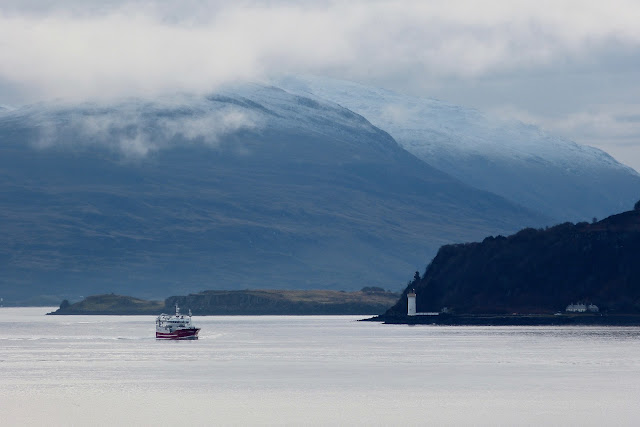 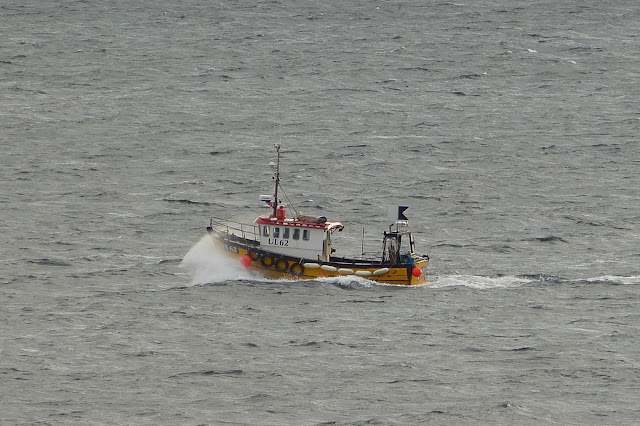 ....this proud little boat, the Ullapool-registered Atlantia, UL62, was seen passing on her way to Mingary Pier to offload her catch of hand-picked scallops.

Her owner is Alasdair Hughson who writes, "We are doing fine but as usual for this time of year the weather could be better. At least the boys got a wee break with the easterlies which allowed them to get round the point in relative comfort. They have been working from Mallaig for the past couple of months.

"We are over the hump with Christmas behind us so a slower time of year now to catch up on the jobs. We are all waiting with bated breath to hear the decision on the Marine Protected Areas for the West Coast. These could make our business more productive and efficient if they protect and enhance the inshore scallop fishery as we hope they will. Given time we may not need to cover such a large area to catch the product we require. The stock needs a breathing space as the sheltered areas have been hammered over the last three stormy winters." 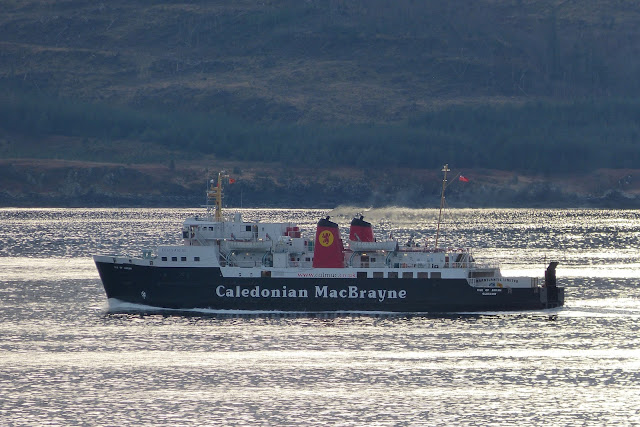 CalMac have been shuttling ships between their various services to allow boats go off for their annual maintenance. This is the Isle of Arran which usually sails from Ardrossan to Campbeltown, and spends her winters as a relief vessel at Kennacraig.
CalMac's sailings have been severely hit by poor weather during storms Gertrude and Henry. 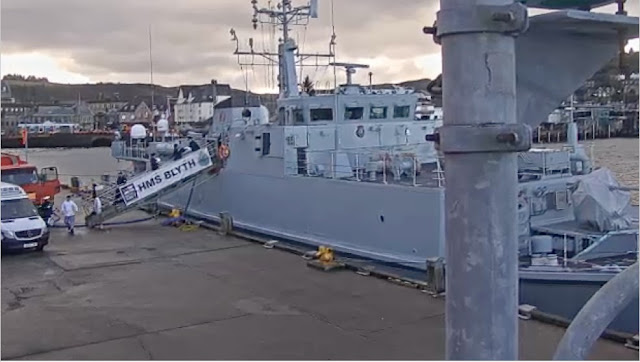 Lastly, in the absence of any sight of Royal Navy ships passing us, here's a rather different view of a warship, HMS Blyth, a ship which we've seen in the Sound. She's seen tied up in Oban on a recent visit, the picture taken from a webcam by the Eeusk Seafood restaurant - here.


Many thanks to Derryck Morton for bringing the webcam to my attention, and to Alasdair Hughson for his insight into local scallop fishing.
Posted by Jon at 14:58