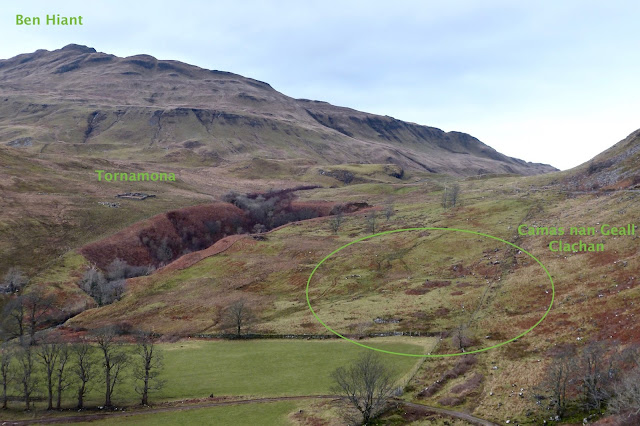 The Ardnamurchan Community Archaeology group - all two of us - met at Camas nan Geall this morning to make a start on a map of the clachan there. Most people know of Camas nan Geall's much older archaeology, particularly the neolithic chambered cairn and the graveyard with its bronze age standing stone, but the little community in which the ordinary people lived for perhaps a thousand years and more is largely forgotten.

Like most clachans, the dwellings, byres and other domestic and agricultural buildings were located on some of the rockiest, and therefore least agriculturally valuable, of the land - marked on the picture above by the green ellipse.   From a distance, the buildings are almost impossible to distinguish except, just beyond the wall that runs right-left beyond the field, there is one house which may have continued in use, possibly occupied by one of the shepherds employed on the sheep farm created after the clachan was cleared in 1828. 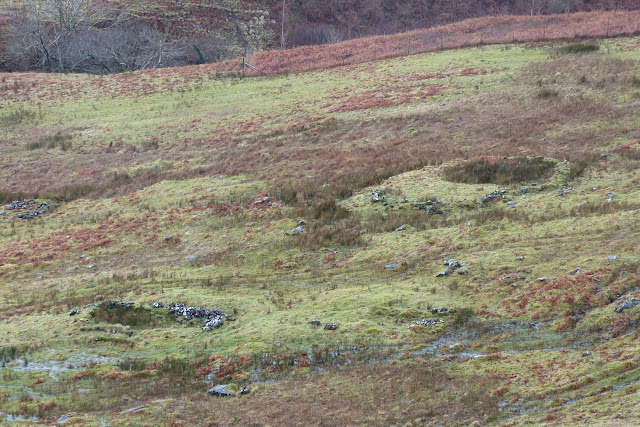 From the road that runs along the top of the steep slope above the clachan a few structures can be seen. The most evident is the oval-shaped, walled structure at upper right. This is some 18m along its longest axis, by 11m, and may have been an animal enclosure. At lower left is a typical house. 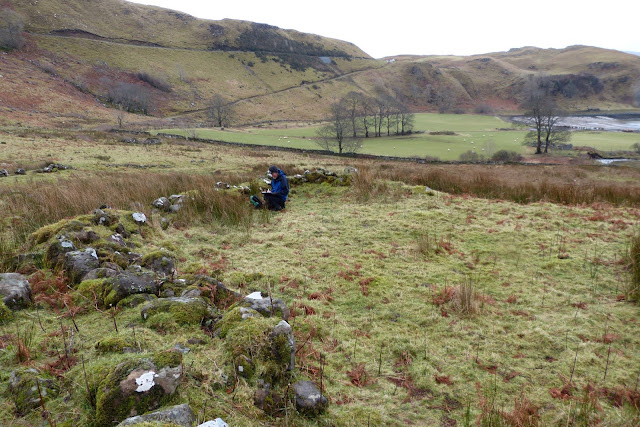 This picture shows part of the big enclosure's northeastern wall, which was about a metre thick and, in its day, judging by the amount of fallen stone, probably quite high. 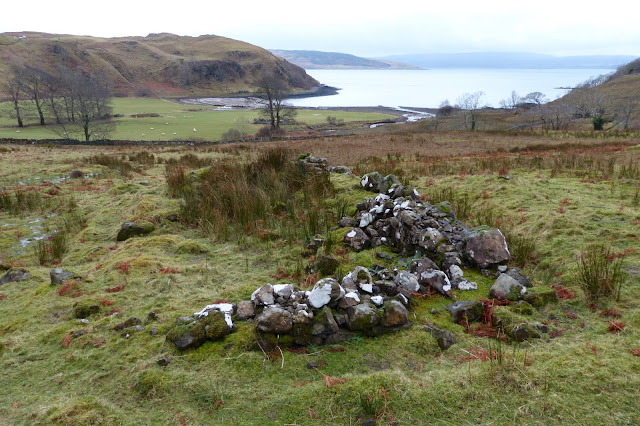 This is the other structure, an 8m x 4m building which was probably a dwelling. Basically rectangular in shape, it exterior walls have rounded corners, and the door was probably on the left as this picture shows it. Beside it is a smaller building which might have been a byre. These are typical late-clachan buildings, their occupants probably cleared from them in 1828. 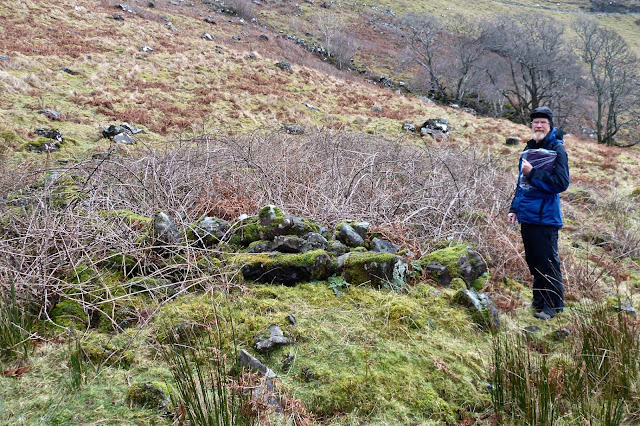 Generations of people have lived on this small patch of land, many in buildings which were largely made of wood and turfs, structures which are long gone.  We rather assume that the rectangular stone buildings with rounded corners are the most recent, being immediately pre-clearance. However, three of the buildings, of which this picture shows the most interesting, have ends which are curved so the ground plan is roughly lozenge-shaped. They have another similarity in that all three have substantial walls and, unlike the others, are covered in brambles.

In all we found, mapped and briefly described eight buildings and a couple of enclosures, as well as the large enclosure. There's much more to be found - but next time we'll visit on a warm, sunny and dry day.


Many thanks to Dave Kime for his company.
Posted by Jon at 15:20