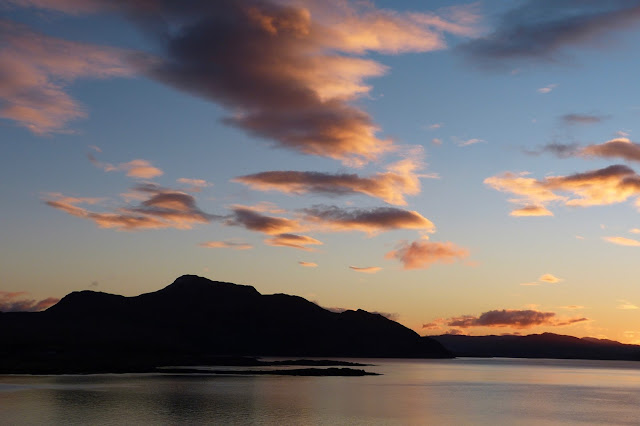 When dawn looks like this in mid-February one can be fairly certain that, even though we must have one of the mildest climates in Britain, there's bound to be.... 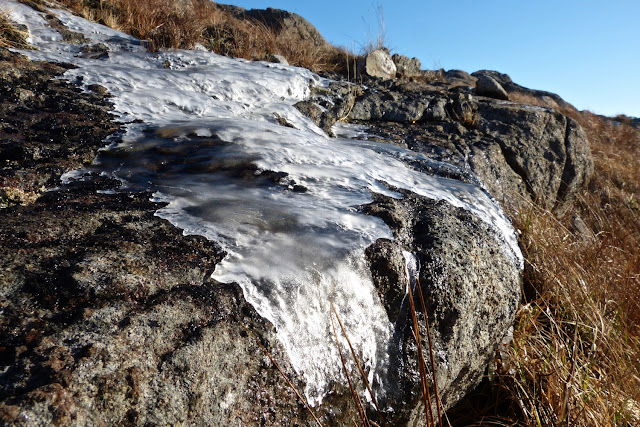 ....a sharp frost. Last night saw the coldest temperature for some time, -2C, but when the frost comes with a chill breeze from an unusual direction, the northeast, one of the joys of having such a wealth of walks locally is that one can choose.... 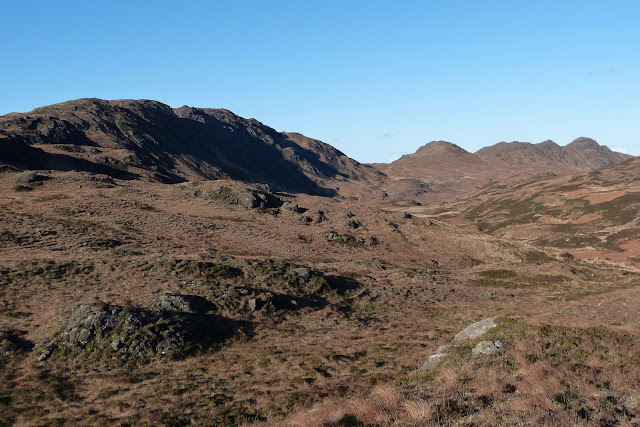 ....a ridge that runs northwest-southeast which provides a south-facing lee slope in which to enjoy wall-to-wall warmth in the sunshine.

Beinn na h-Imeilte, the hill of many streams, is formed by the eucrite outcrop of the Ardnamurchan Tertiary ring dyke complex and is a favourite of ours because it also offers some of the best views on western Ardnamurchan. 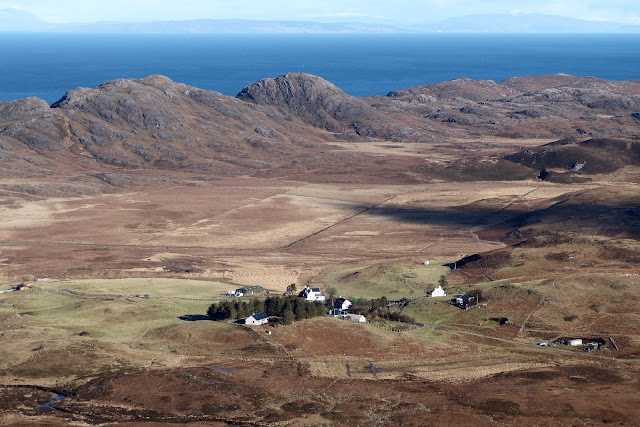 Looking northeast, the busy township of Achnaha lies near the centre of the ring complex. Beyond it is the northeastern side of the eucrite outcrop, the two highest peaks being Meall Clach an Darraich (left) and Sgurr nan Gobhar, with the low lands of Skye in the distance. 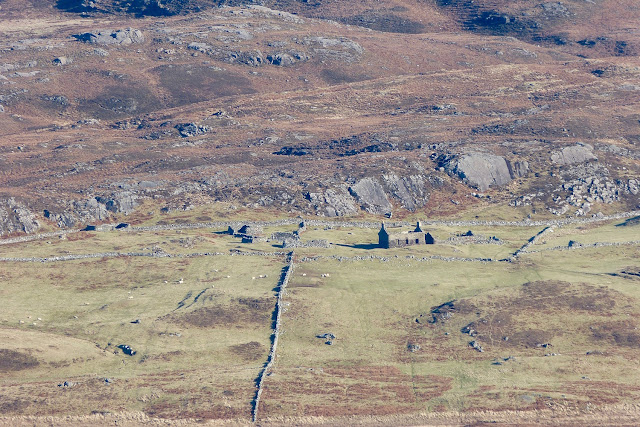 A little further into the east is the abandoned village of Glendrian, with its inbye fields, roofless houses, and the straight stone walls built in the mid-nineteenth century when the clachan was converted into a crofting township. 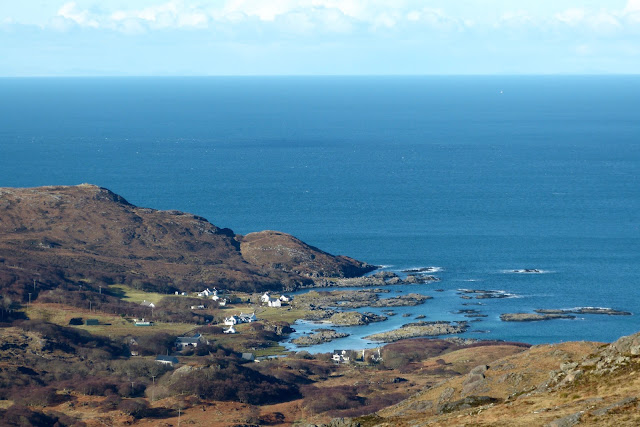 To the northwest lies the centre of the universe. This very special place happens to be occupied by the crofting township of Portuairk. Because of its astronomical importance, one hasn't really lived until one has visited Portuairk, though this is best done in summer when the sun, after hiding behind Beinn Buidhe for much of the winter, finally sheds a few hours rays on Portuairk's gentle beaches and white-painted houses. 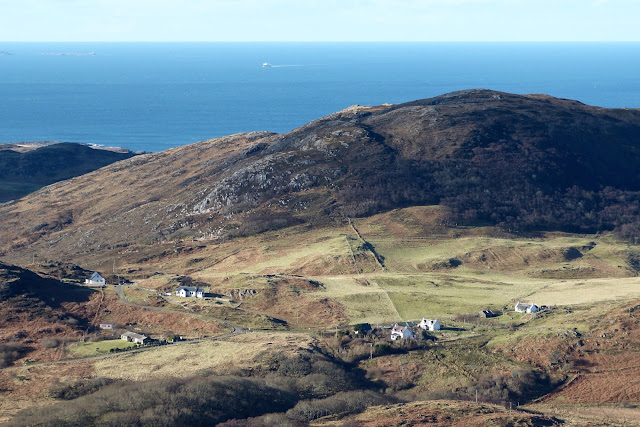 Neighbouring Achosnich would bask in the sun's rays throughout the year if only it would put in a more frequent appearance. There was a time when Portuairk wasn't inhabited and Achosnich had far more houses, and people, but, while some new houses have been added, it has neither the attraction of a beach nor any sort of astronomical fame. 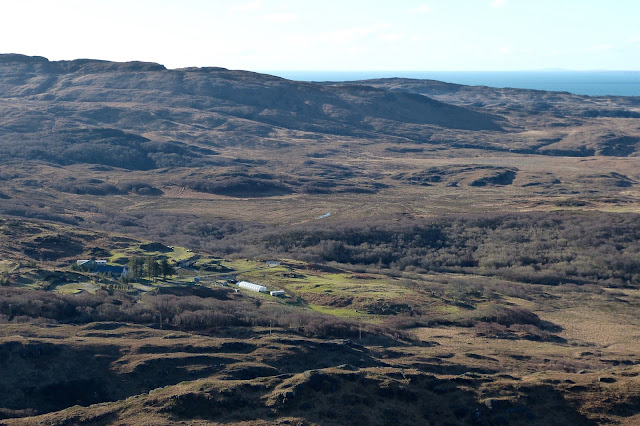 To the south of the ridge, alone in a glorious wilderness, lies the Sonachan Hotel. It's been on the market for some months now, and the price has dropped to £350,000 - see full details here. 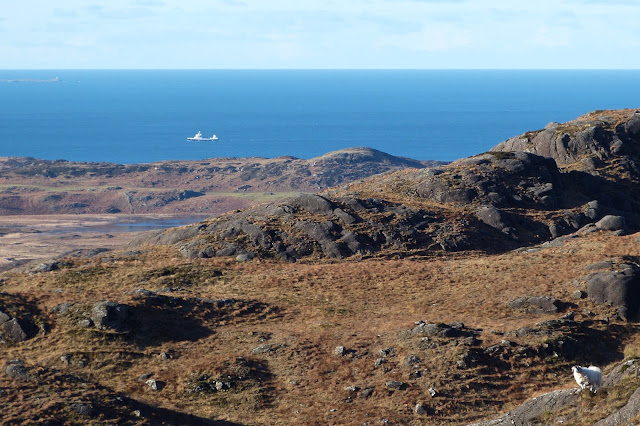 This picture is included not for the well boat rounding Ardnamurchan Point on its way to the Maclean's Nose fish farm, nor for the distant view of Loch Grigadale which, like most of the local lochans, has a film of ice across it, but for the blackface sheep in the bottom right-hand corner, one of the few living things, along with a couple of crows, we saw all morning.
Posted by Jon at 15:58