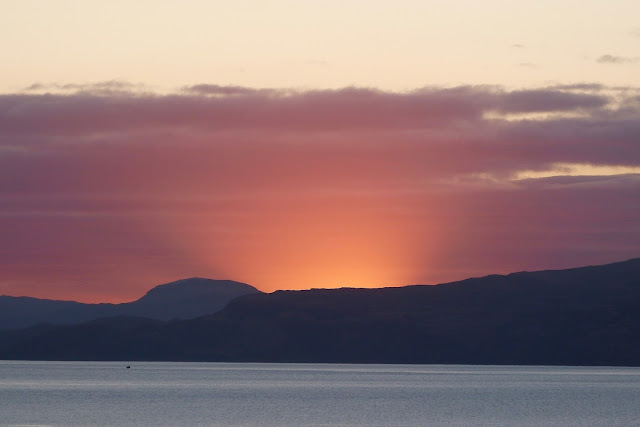 Our fine weather continues but this morning's sunrise - 'red sky in the morning, shepherd's warning' - signalled that things are about to change: there's a storm arriving in during the early hours of tomorrow morning, with winds forecast to gust to force 9 during daylight hours. 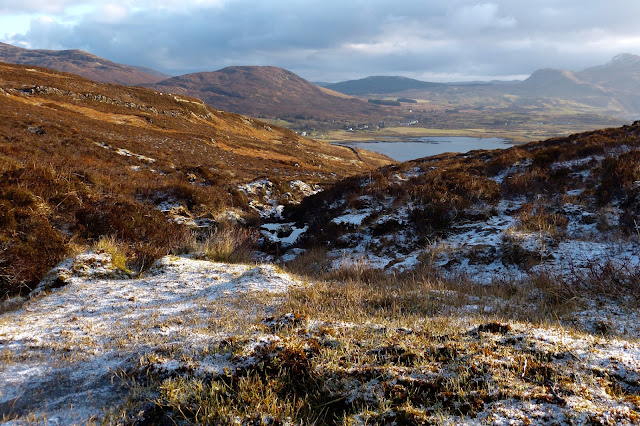 So we took advantage of the last of the precious sun and headed westwards into the hills, walking straight up from the house and following the burn upstream - picture looks back towards Kilchoan Bay. As can be seen, last night brought snow, a powdering of coarse crystals, and the ground was still frozen from the previous night's frost. 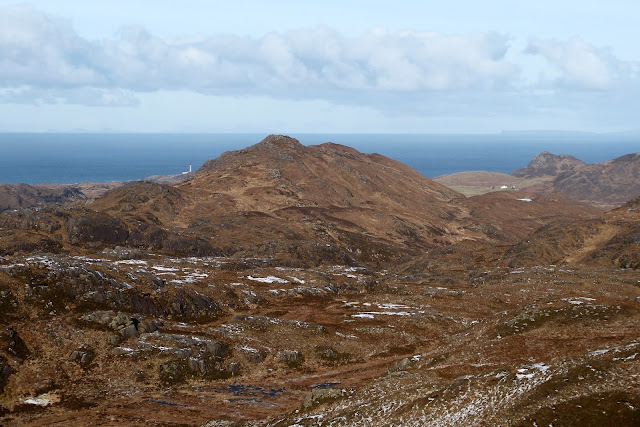 Within twenty minutes we were high in the hills, in gloriously wild country, looking across the peninsula towards Beinn nan Ord, the lighthouse, Grigadale farm, and the northwest coast. 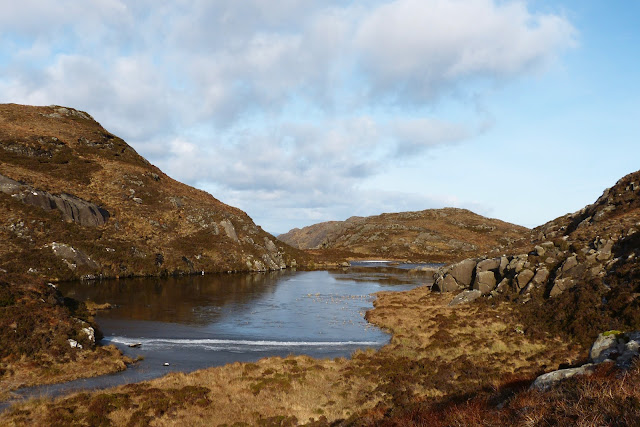 Our objective - I can't walk without one - was this little lochan, Lochan na Cloiche, the stony lochan, 2.5km west of us as the crow flies but rather further on foot. We had expected it to be covered with ice but much of its surface was still clear; the line of white at this end is ice which had obviously formed but been pushed down one end either by the north wind or by the drainage which runs in this direction. 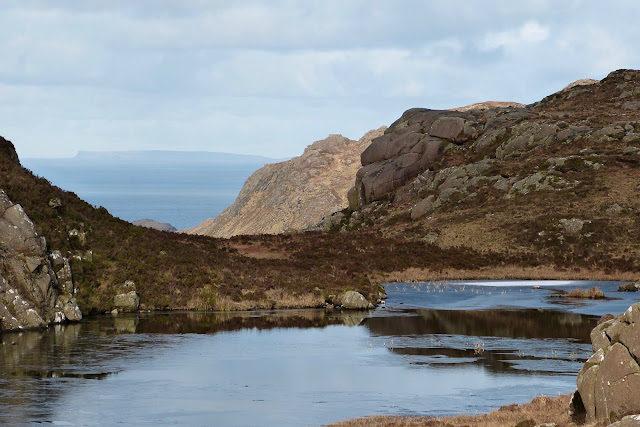 It's an obliging little lochan when it comes to framing views. In this picture, we look past the sunny slopes of Beinn nan Ord to the island of Canna, while.... 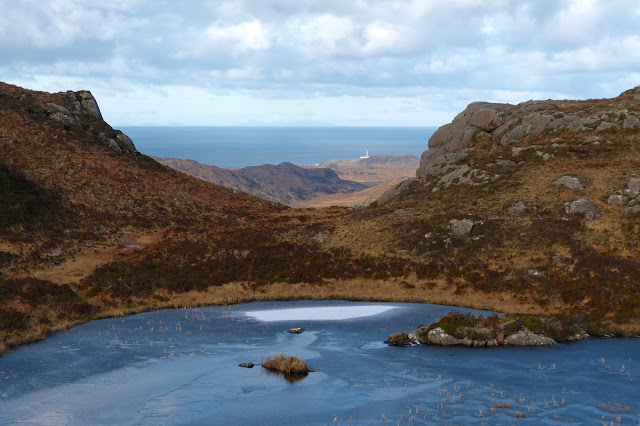 ....this one frames Ardnamurchan Point lighthouse, and.... 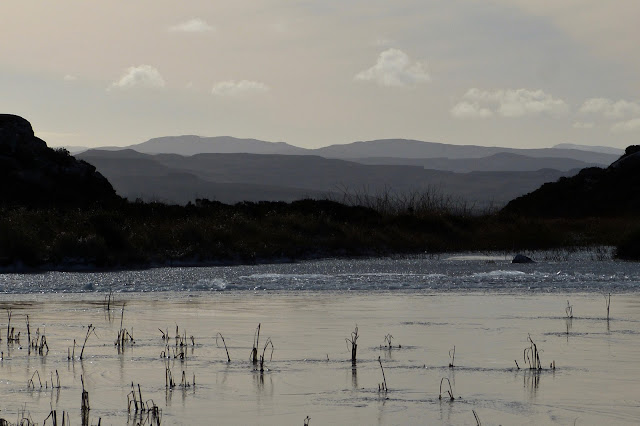 ....this looks in the opposite direction, south, across the Sound of Mull to the hills of northern Mull. 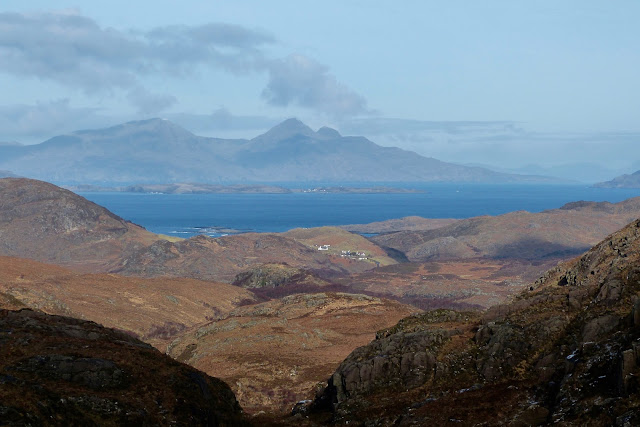 To reach the lochan we had followed a rocky and somewhat precarious sheep track round the Sound-side of two hills, one of them the forbiddingly named Dubh Chreag, the black crag, so we returned across their northern flanks, giving us views across a sunlit Achosnich to low-lying Muck and, beyond it, Rum. 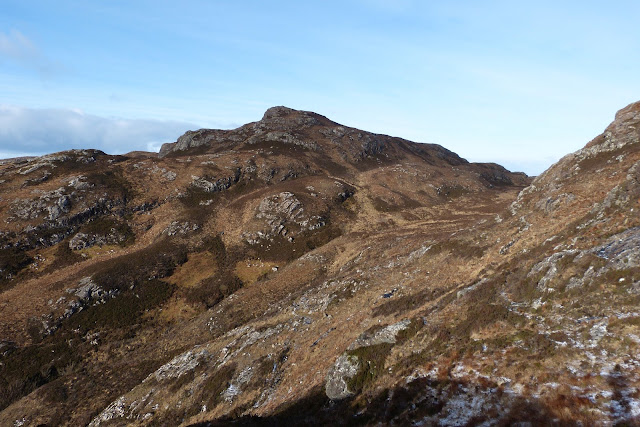 We returned to the coast-side through this little glen - the picture looks back the way we'd come, and that's Dubh Chreag on the skyline - before.... 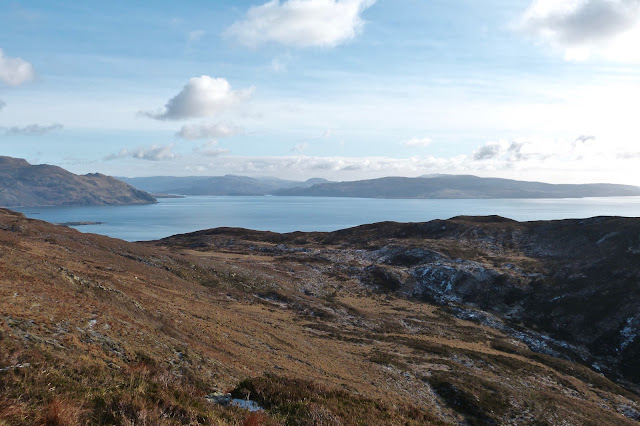 ....re-entering the very open valley of the burn that leads to our house. It drains the land between Maol Buidhe, on the right, and Druim na Gearr Leacainn, the ridge to the left which runs along the back of Ormsaigbeg. In the distance are the mouth of Loch Sunart and the hills of Morvern. 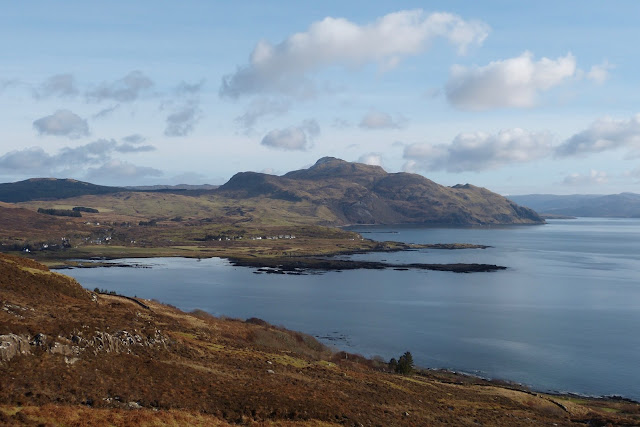 It seems difficult to believe, but is so typical of this place, that today's light winds and warm sunshine are about to be swept away by another bout of grey, wet and windy weather.
Posted by Jon at 15:52