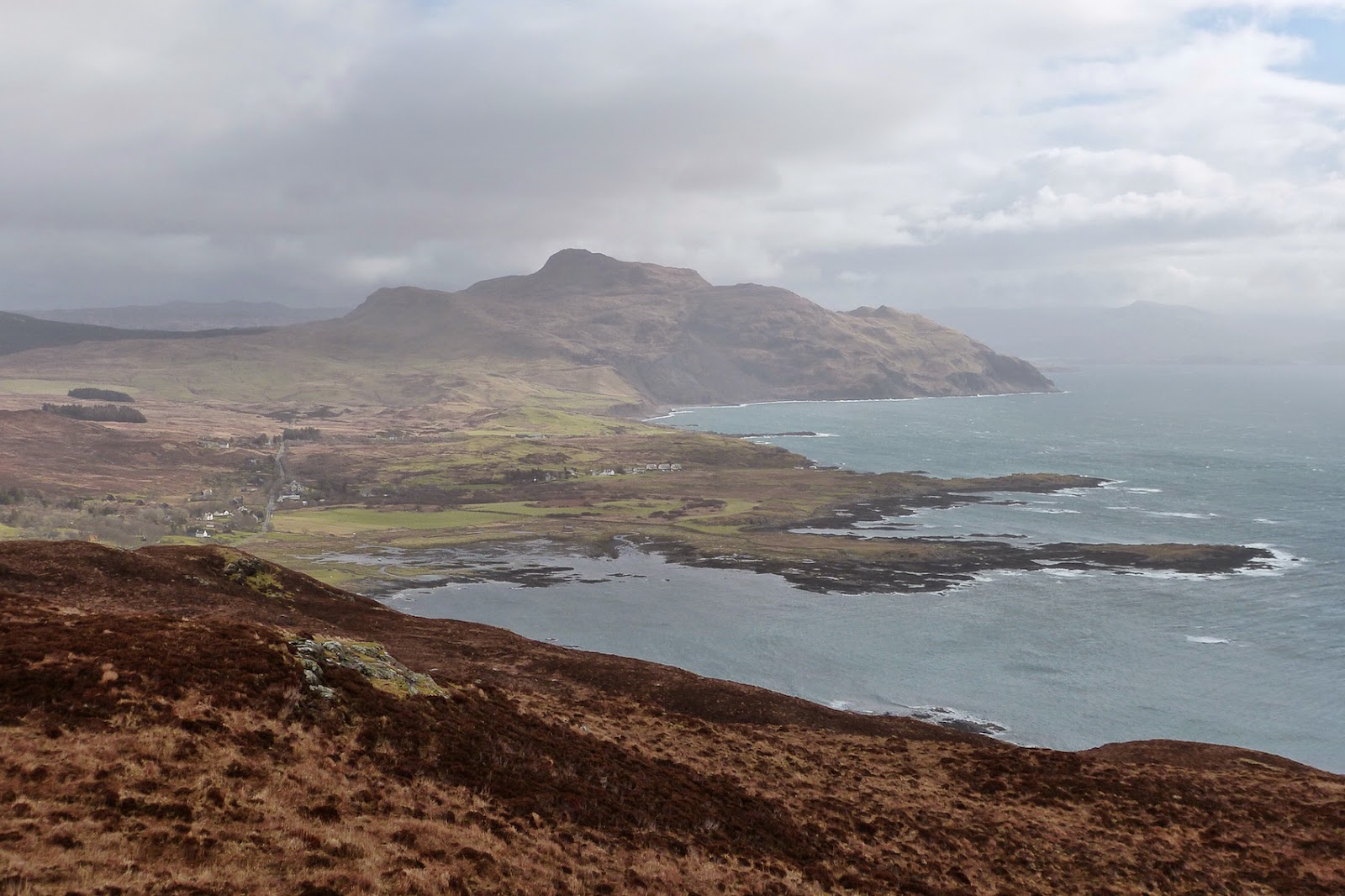 For the last five days we've been in a westerly, Atlantic airstream which has brought everything from heavy rain (22mm on the last day of February, almost an inch), to sleet, hail, and now snow.  Yesterday we walked into the soggy hills at the back of the house, climbing to the western end of Druim na Gearr Leacainn, which gave us views both down into Kilchoan Bay and north, to the lighthouse and Small Isles, but most of the photos are so dull and lifeless that they're not worth sharing. 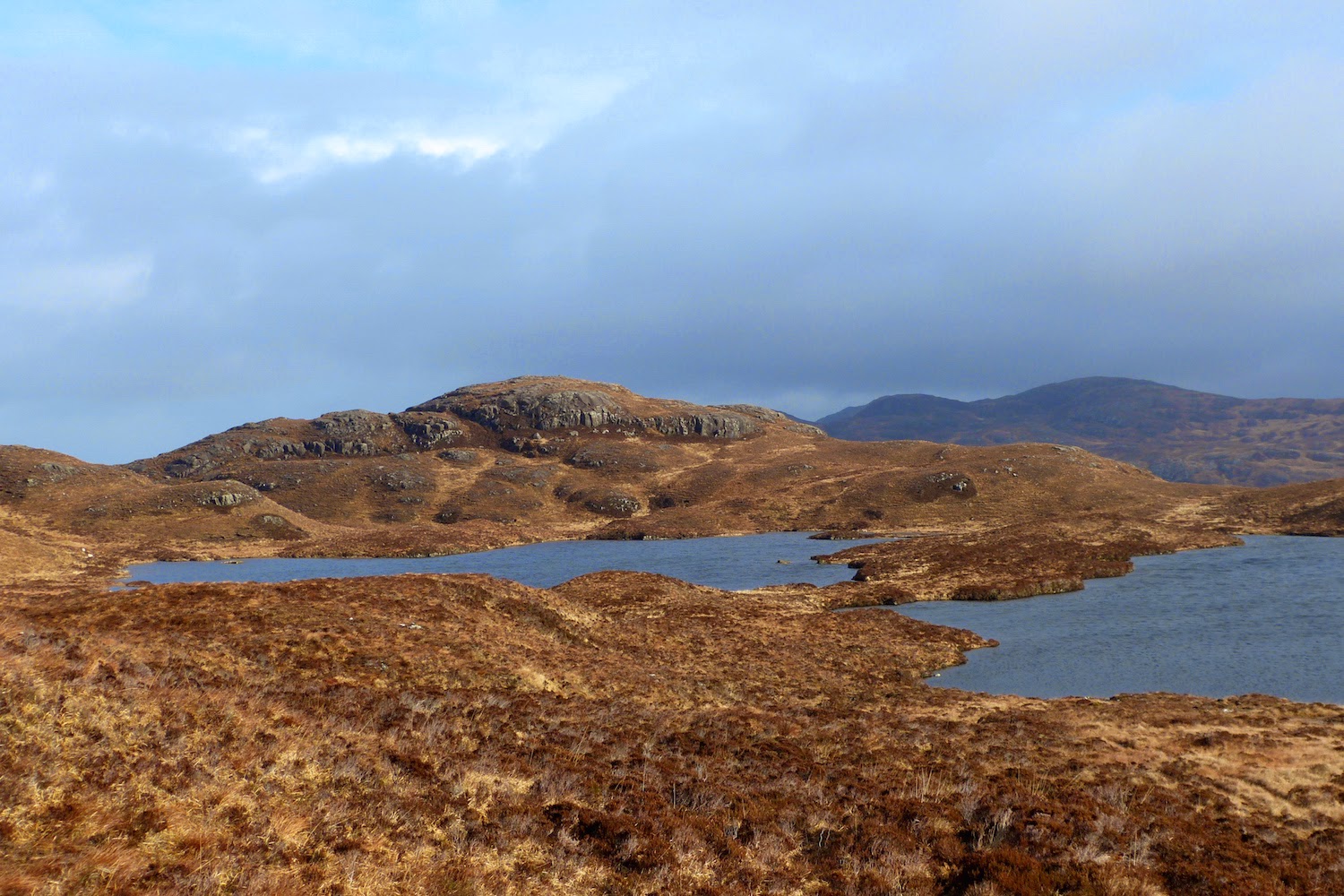 Then - so typically of this place - the sun suddenly came out as we walked above the twin lochans, and flooded the glen, and the blunt height of Stacan Dubha beyond them, with watery sunlight.

One of the bonuses we receive with hail is sudden electrical storms.  Thunder and lightning used to be summer phenomena, but now they seem to come more and more frequently in winter.  The latest episode has blown the BT telephone boxes in several people's houses, the usual symptom being that incoming calls don't ring.  Within twenty-four hours of our reporting the fault, a cheerful BT engineer arrived and replaced our box, all of two minutes' work. The cause was a small electrical fuse-like thing within it which, had I had the spare part, I could have replaced. 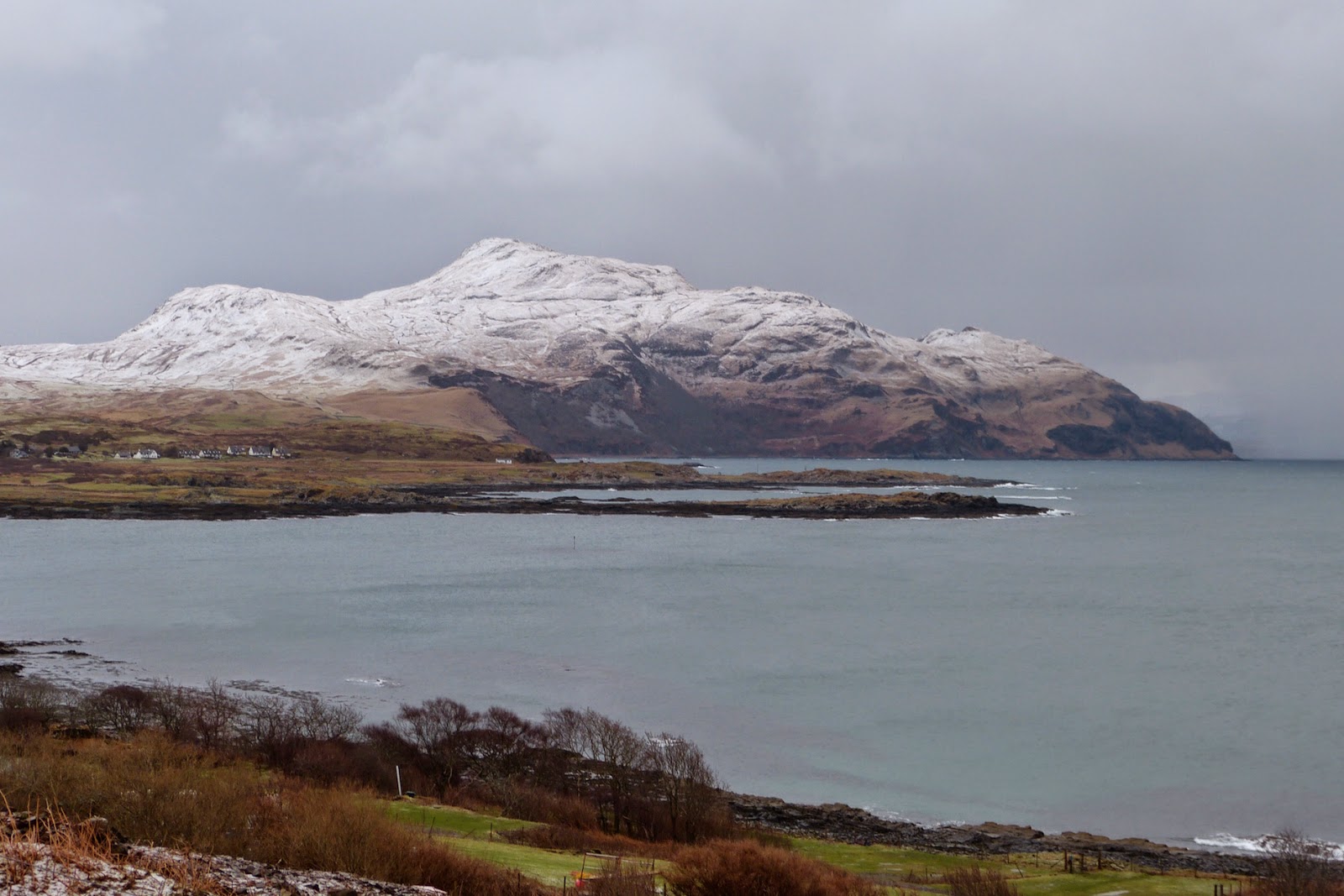 We now remove the connection between the BT box and our router whenever there's a likelihood of an electrical storm, and have things like our Sky Digibox attached to the mains through surge protectors. Our computers have APC Back-UPS boxes which both protect them against electrical surges and continue to run them on a battery for up to twenty minutes or until they can be powered down.

During last night we had at least two heavy hail showers - well, two that woke me.  By this morning Ben Hiant was snow-covered, and.... 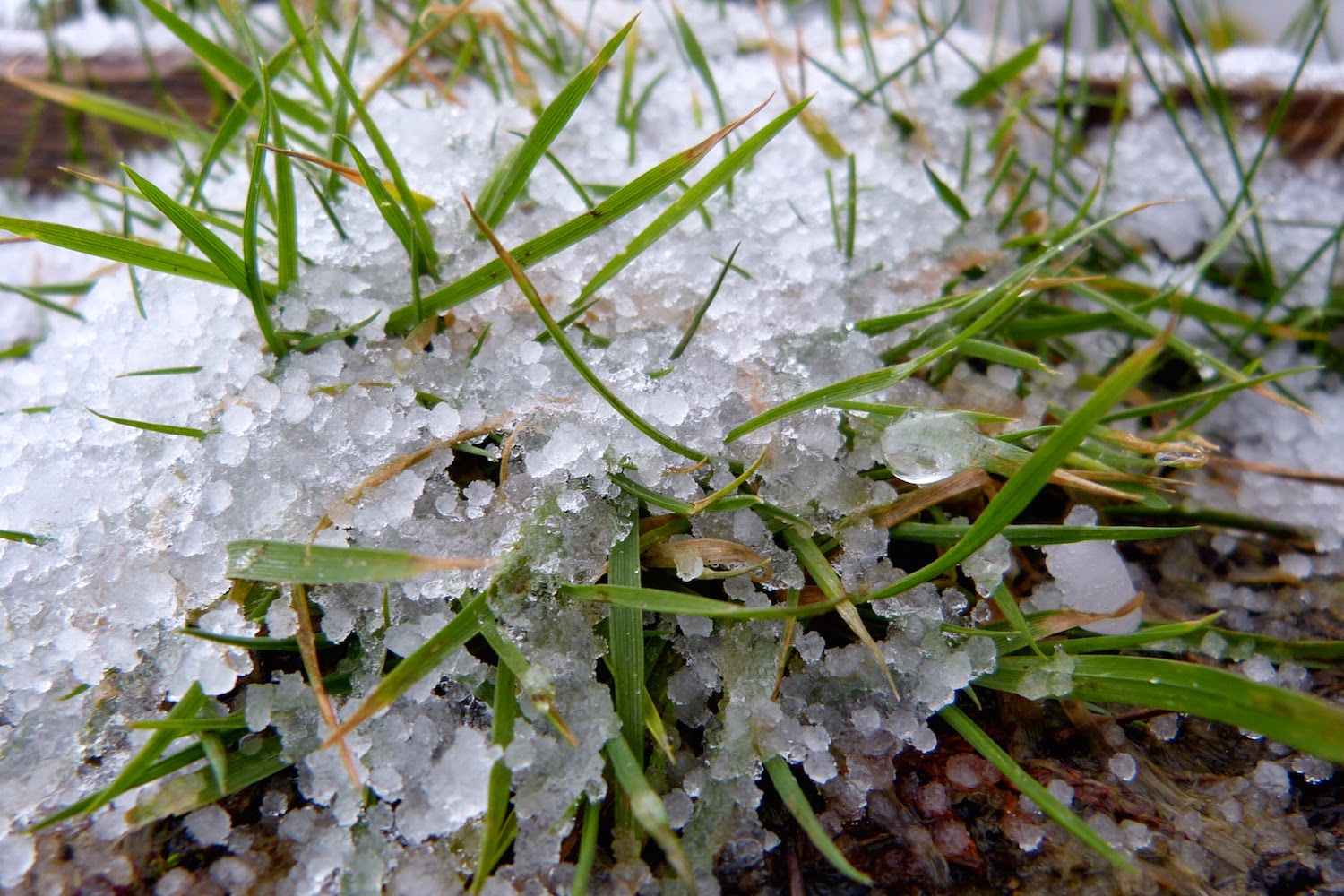 ....even warm Ormsaigbeg had a blanket of.... well, a mixture of snow, hail, sleet and general slush.  As I write, it's now snowing heavily, and the forecast is for more wintery showers.  All one can say is that, if conditions here are poor, people inland will be enduring far worse.

So, at this rather depressing time of year, special thanks go to.... 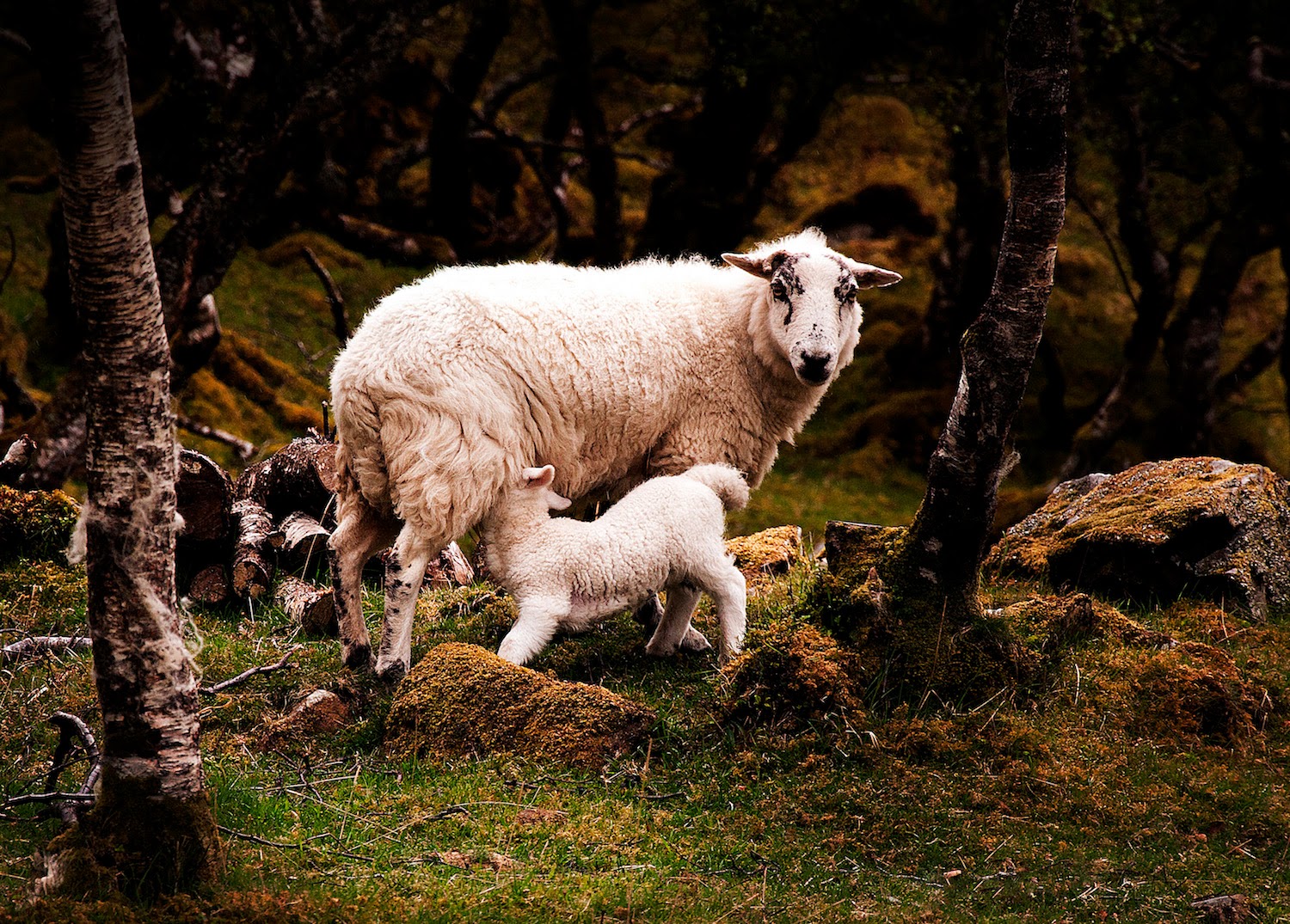 ....Keith Charles, who sends this photo of mother and lamb taken along the road to Fascadale last spring, to which Keith adds the caption 'Spring is just around the corner'.  Keith, I hope you're right.
Posted by Jon at 09:39