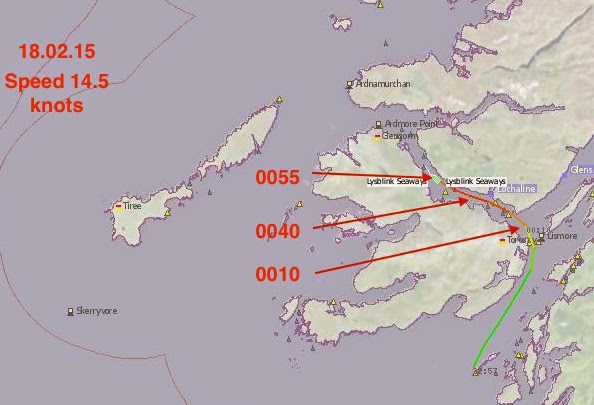 There seem to be more and more questions surrounding the stranding of this ship.  One which hasn't been aired too much relates to events immediately after the Lysblink Seaways hit the rocks by Mingary Pier.

This clip from the Ship AIS website shows the Lysblink's track during the early hours of 18th February.  Her last position in the 'History', recorded at 1.10am, shows her position at 12.50am, and states that she was travelling at 14.5 knots.

The Ship AIS 'History' records ships' positions at ten minute intervals.  The 1.20am map should have shown her further north, almost off Tobermory, but the ship has 'disappeared'. By 1.50am she was on the rocks. 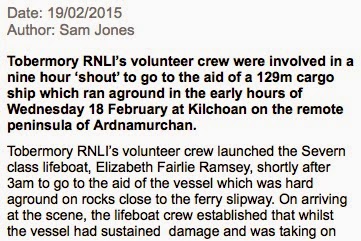 Had a "mayday" been transmitted immediately, one would have expected HM Coastguard to call out the Tobermory lifeboat within minutes, in which case she would have been launched soon after 2.00am.  What seems more likely is that the captain and crew did not declare an emergency.  Did they spent that hour contacting their owners?  Did they put the engines full astern and try to pull her off?  I think the communities of West Ardnamurchan and beyond would like to know. 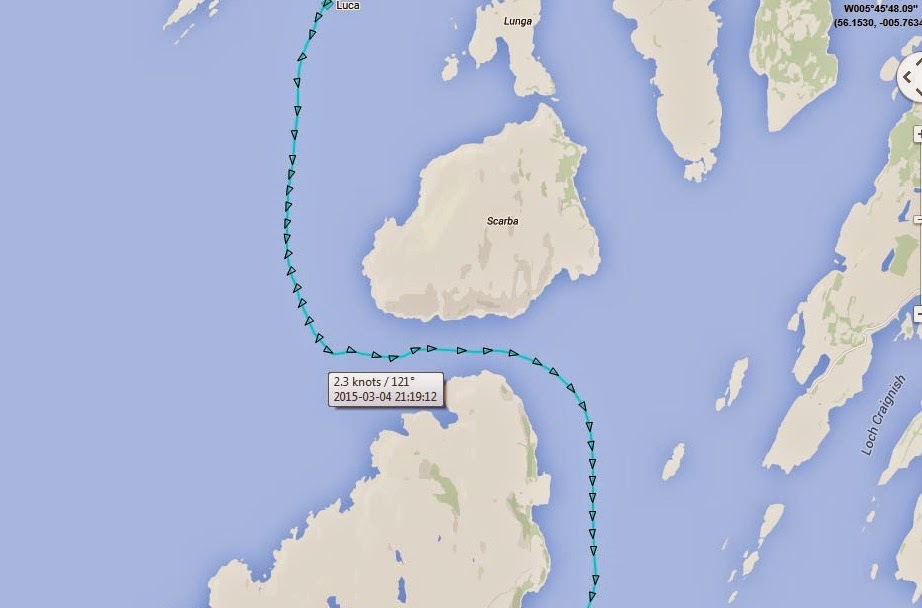 Many thanks to West Coast Yachtsman, who brings the story up-to-date. The Lysblink Seaways, he reports, left Scallastle Bay at 1.00pm yesterday bound for Greenock for repairs; she's due there at about 2.00am tomorrow morning.  She is being towed by the tug Luca with a second tug, Afon Menai, bringing up the rear, and is accompanied by the Forth Jouster.

This map, courtesy West Coast Yachtsman, shows the Luca's passage through the Corryvreckan, the narrow strait between Jura and Scarba which is notorious for its strong currents and whirlpools, around nine last night.  Look carefully at the orientation of the Luca, which shows her pointing increasingly southwest until she, and her tow, are drawn into the strait, at which point, as West Coast Yachtsman so neatly puts it, she "had no choice but to go with the flow".
Posted by Jon at 11:57