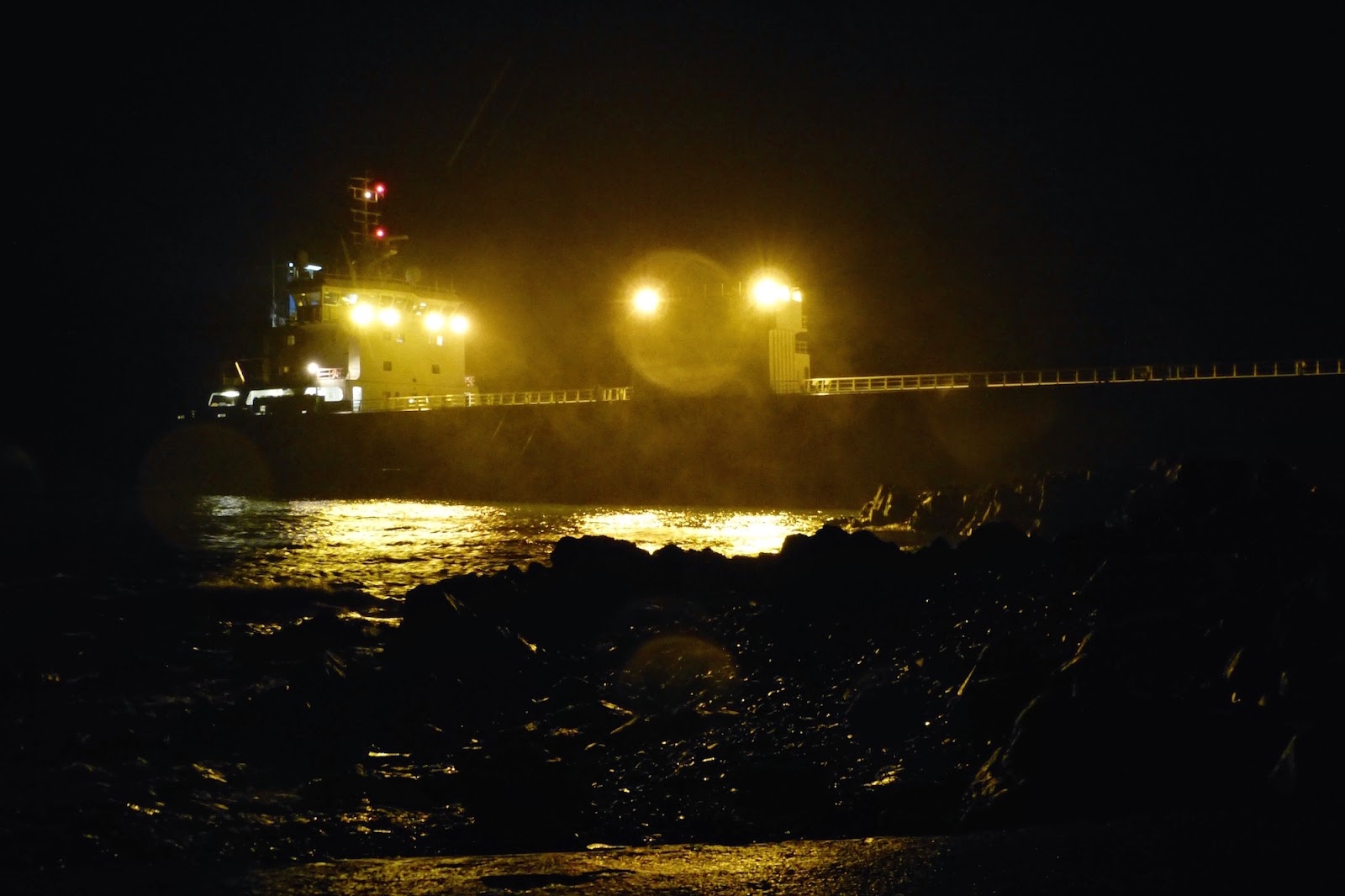 The south coast of Ardnamurchan, Loch Sunart, and the northern end of the Sound of Mull were nearly, so nearly, the scene of a serious pollution incident.  The grounding of the Lysblink Seaways follows those of the Lysfoss (2001, on Auliston Point) and Fri Ocean (2013, 2.5 miles south of Tobermory), all at the northern end of the Sound in an area which is to become a Scottish Marine Protected Area.

A number of questions were raised at last night's West Ardnamurchan Community Council meeting.  These include: 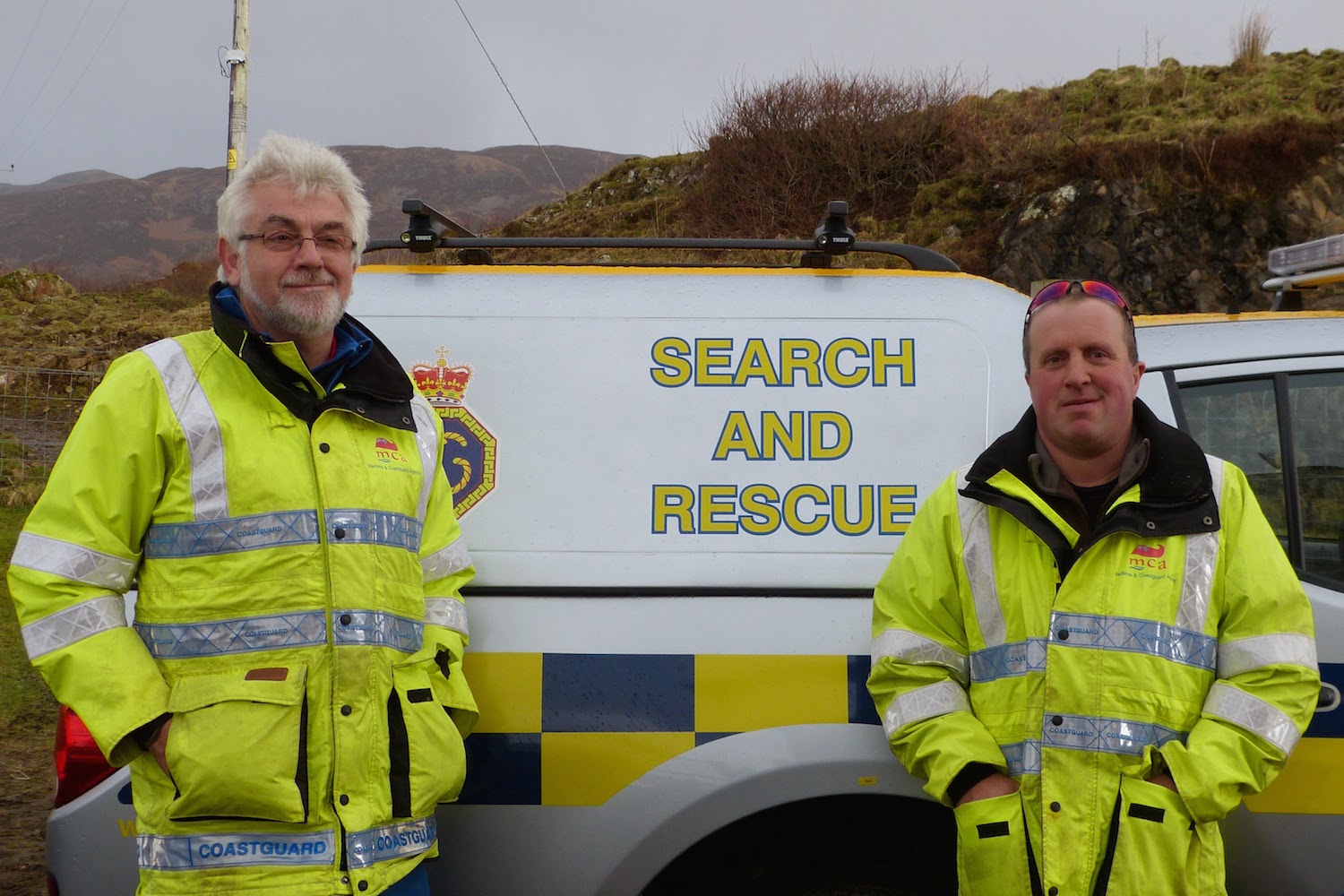 1.  Why wasn't Kilchoan Coastguard team called out as soon as the grounding was reported?  Why wasn't the Fort William Sector Manager, in whose area the incident occurred, alerted?

Kilchoan's is one of the most highly trained and enthusiastic teams along Scotland's west coast.  Unlike many, it is a Cliff Rescue Team.  The Kilchoan Station Manager Hughie MacLachlan (right), and his boss, the Fort William Sector Manager, were informed by a member of the public who had gone down at four in the morning, two hours after the grounding and some time after the Tobermory lifeboat had been called out, to look at the ship. 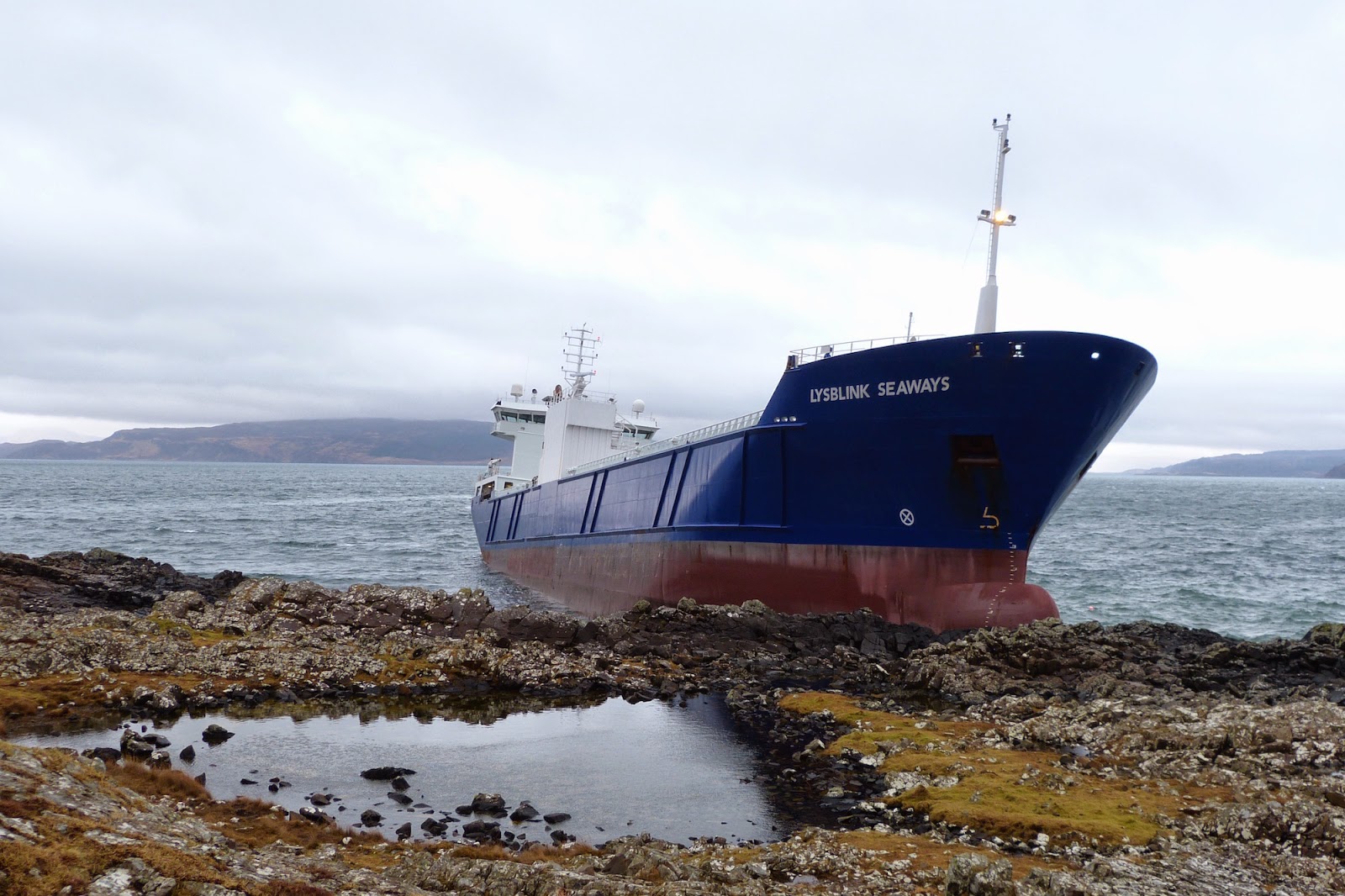 This will be the subject of an investigation by the Marine Accident and Investigation Board, and there will be a full report. 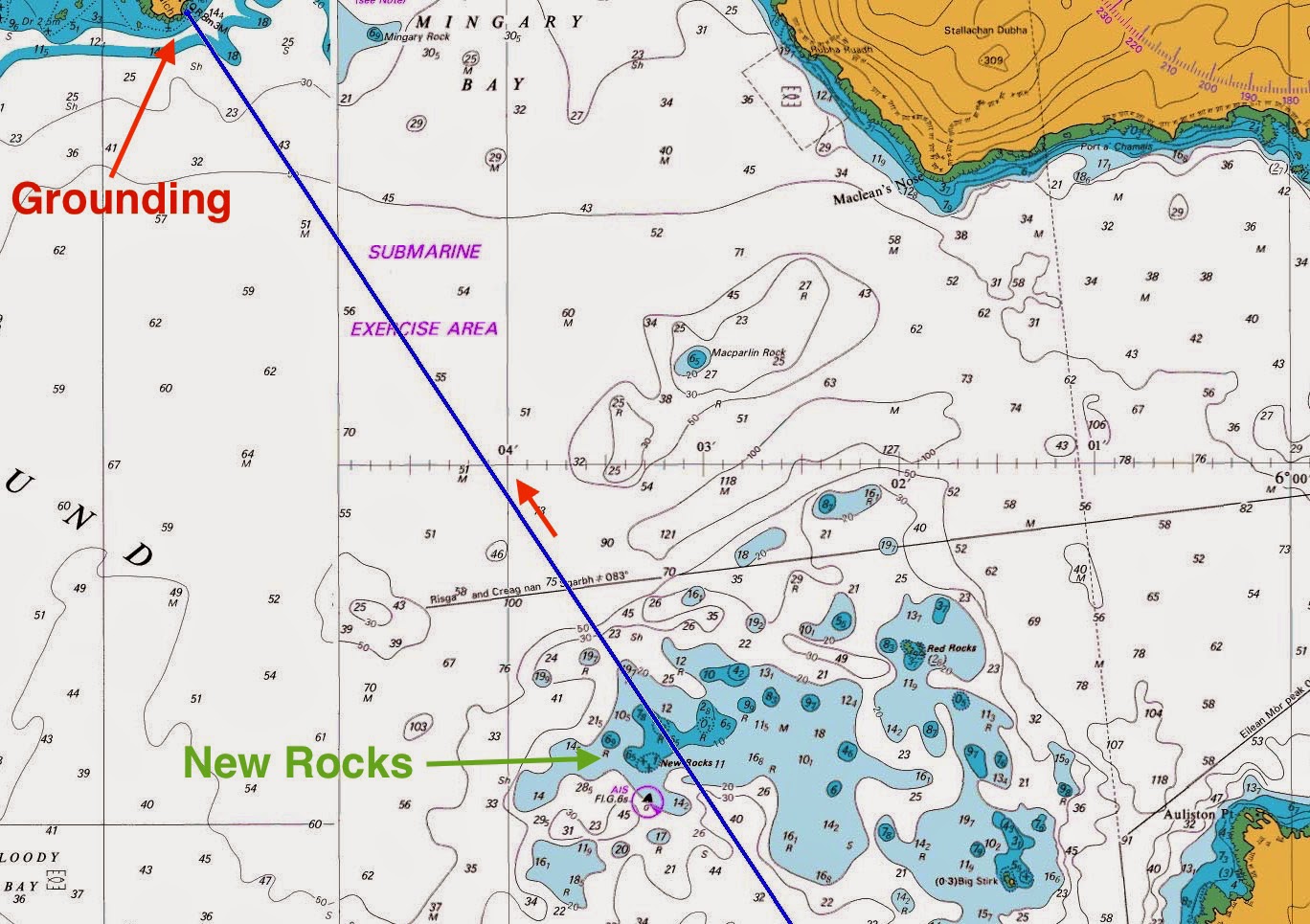 When one looks at the AIS track of the ship in the minutes before the grounding (map courtesy West Coast Yachtsman), one's hair stands on end.  The Lysblink Seaways must have missed the New Rocks by metres.  If she had grounded there, the incident might have been far, far worse.  The consequences, for local fish farms including the new fish farm at Maclean's Nose, for our local creel fishermen, and for our tourist industry, would have been disastrous.

The MAIB report will take time, but it'll be publicly available and thorough. 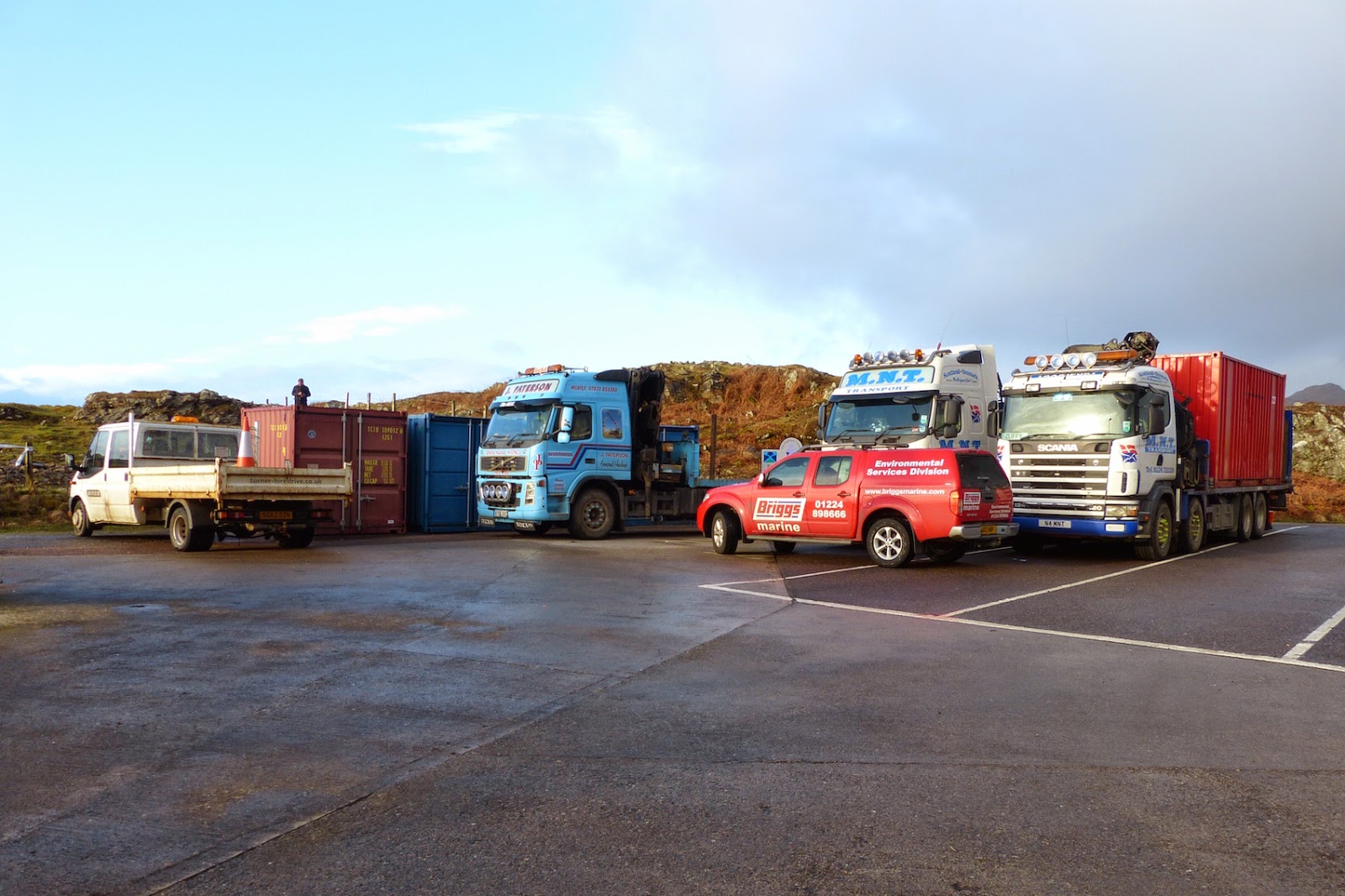 3.  Were the salvage people prepared for the possibility that she might refloat herself?

The only people on duty on the shore near the ship at the time she floated herself off the rocks on Thursday evening, shortly after one of the highest tides of the year, seem to have been members of Kilchoan Coastguard and a local policeman.  The crew of the ship reported they were afloat, and the Forth Jouster, lying close by, came to their aid, but the Kingdom of Fife was some distance away.  The wind was westerly, and blowing the ship towards a beach a kilometre from where she had been stranded. 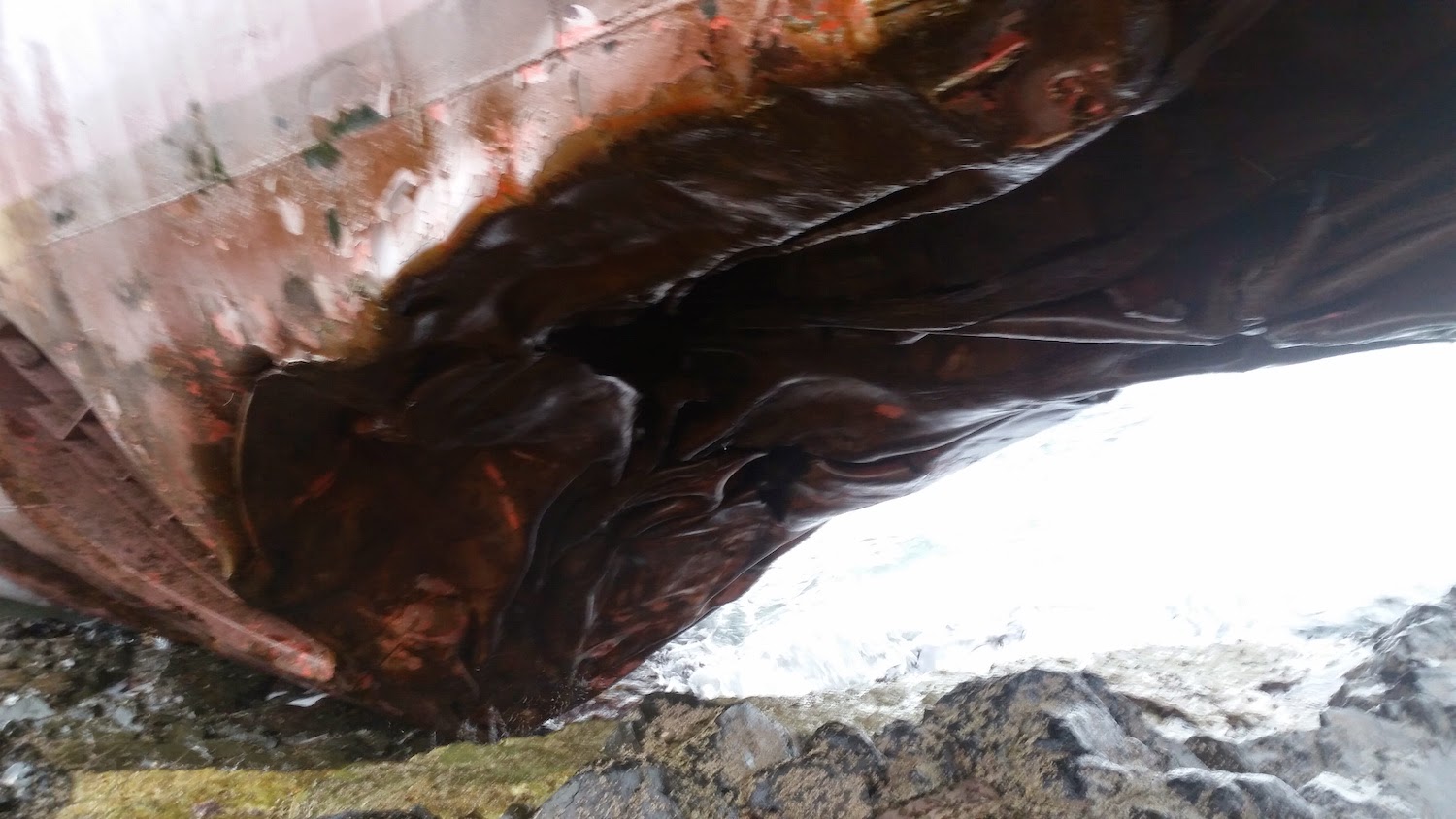 This picture of the bulbous bow of the ship was taken by a member of the local Coastguard who, in the hours before she floated off, noticed that it had moved.

One is reluctant to question the professionalism of the highly experienced people involved in a salvage operation such as this, but when one considers how much this community had to lose if things had gone wrong, then perhaps some sort of enquiry into its handling is merited. 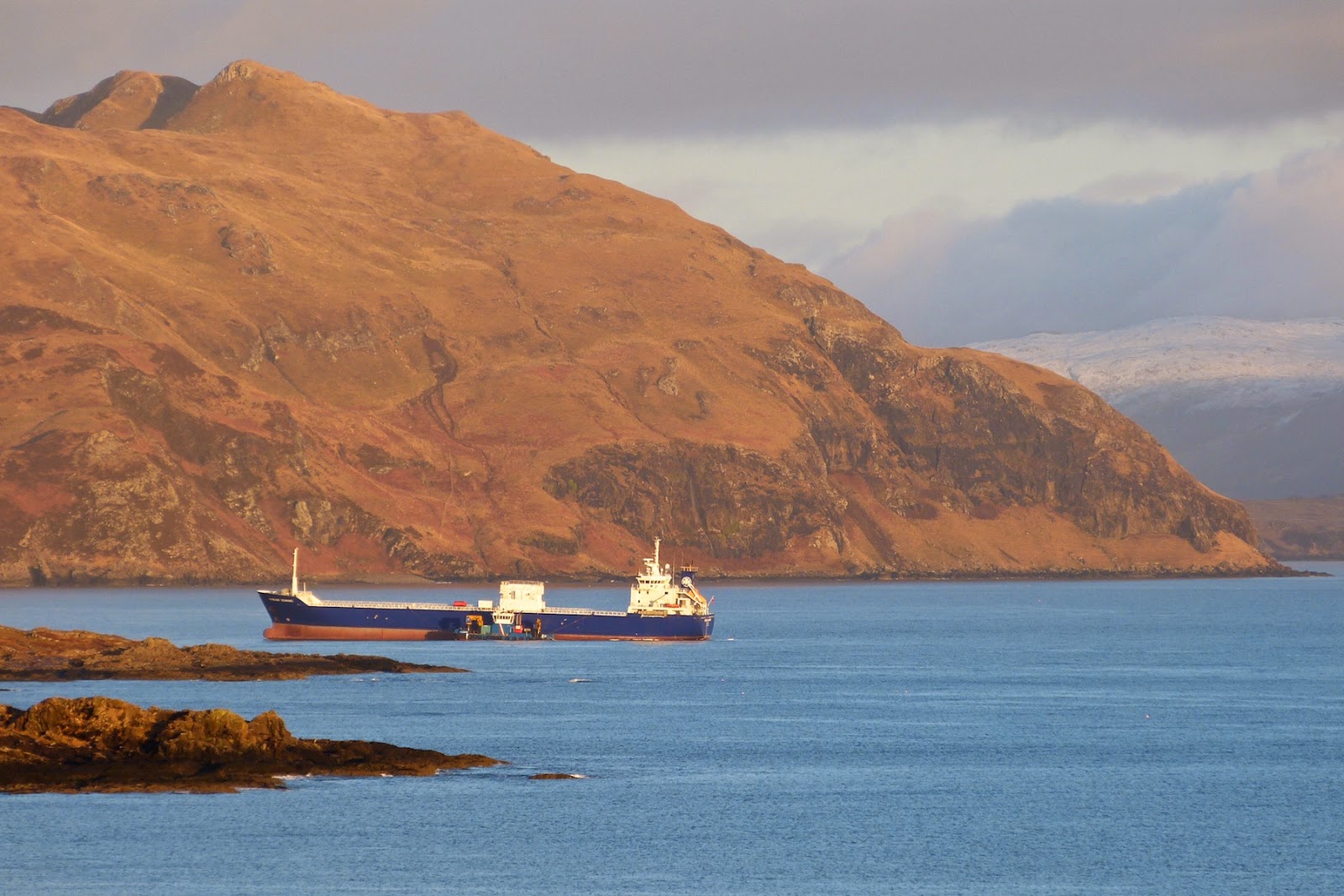 4.  Why was the Lysblink Seaways left in such a confined and exposed position overnight on the night of Saturday/Sunday when an inshore gale was forecast?

The Lysblink Seaways dragged her anchor that night, and had to be towed away from a lee shore.  The next morning, she was moved to a better anchorage, regularly used by ships like the Hebridean Princess and Pharos, to the east of Mingary Castle.

Hugh Shaw, the Secretary of State’s Representative for Maritime Salvage & Intervention, has said that it was his decision, bearing in mind the salvor's concern about the risk of fuel leaking from the tanks during the tow, yet the next day, Sunday, the salvors moved her.  Conditions on the Saturday evening, see picture, were calm.

5.  In view of the three strandings in our part of the Sound of Mull in the last fifteen years, what is going to be done to prevent further, similar incidents?

It was felt by some at the Community Council meeting that restrictions should be placed on which ships are permitted to pass through the Sound of Mull, it being suggested that some do it to maintain a good TV signal.

6. When is HM Government going to reinstate the Coastguard Emergency Towing Vessel at Stornoway?

It was agreed that West Ardnamurchan would do what it could to help the campaign to have an emergency tug reinstated at Stornoway as a matter of urgency.
Posted by Jon at 10:28