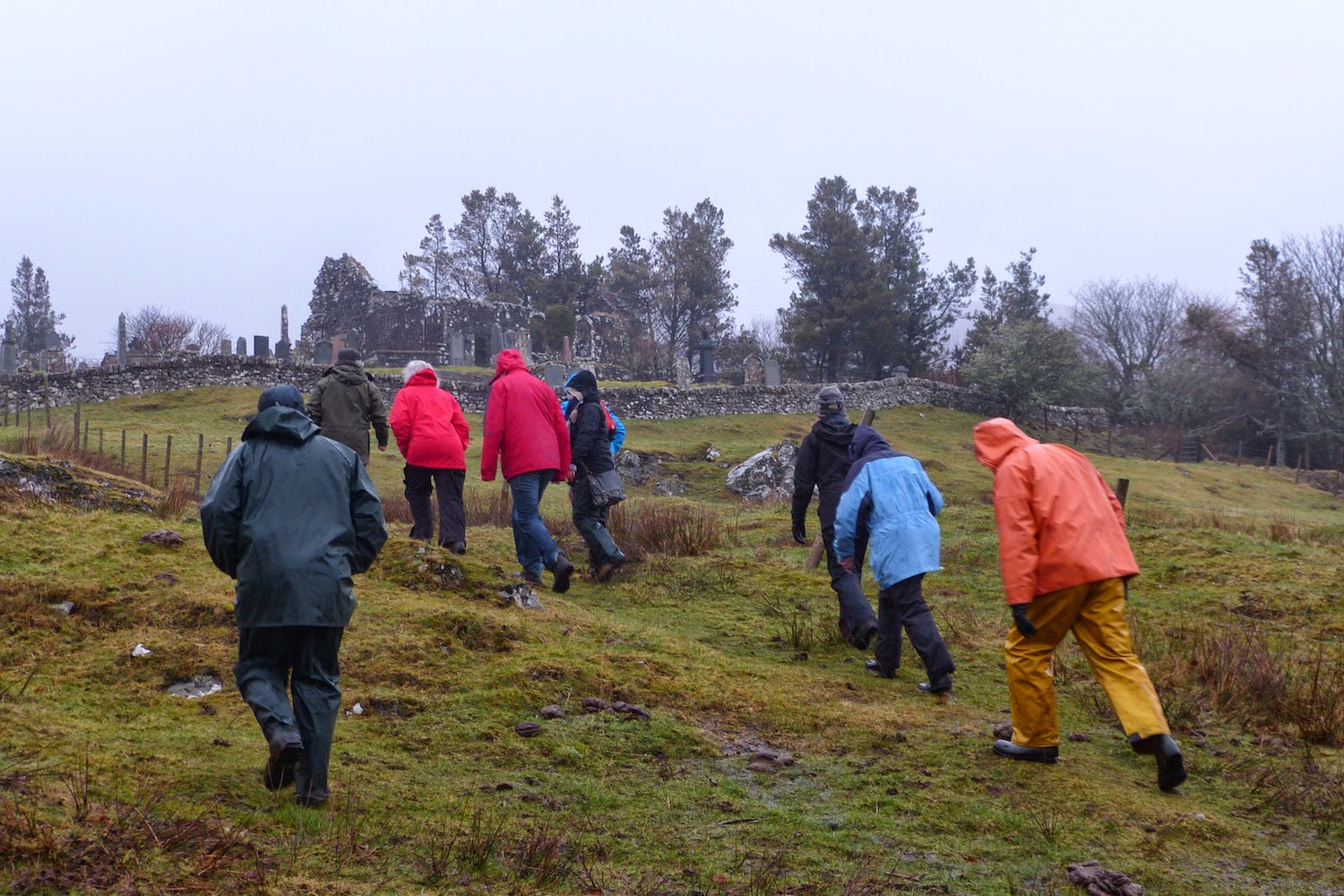 We've had some 40mm of rain in the last 24 hours, brought in on a strong westerly wind, so today wasn't a great day for the course on graveyard archaeology, run by our friends Cara Jones and Phil Richardson at the 'Adopt a Monument' section of Archaeology Scotland.  Fortunately, most of the learning was done at the Kilchoan Learning Centre before we set off for St Comghan's. 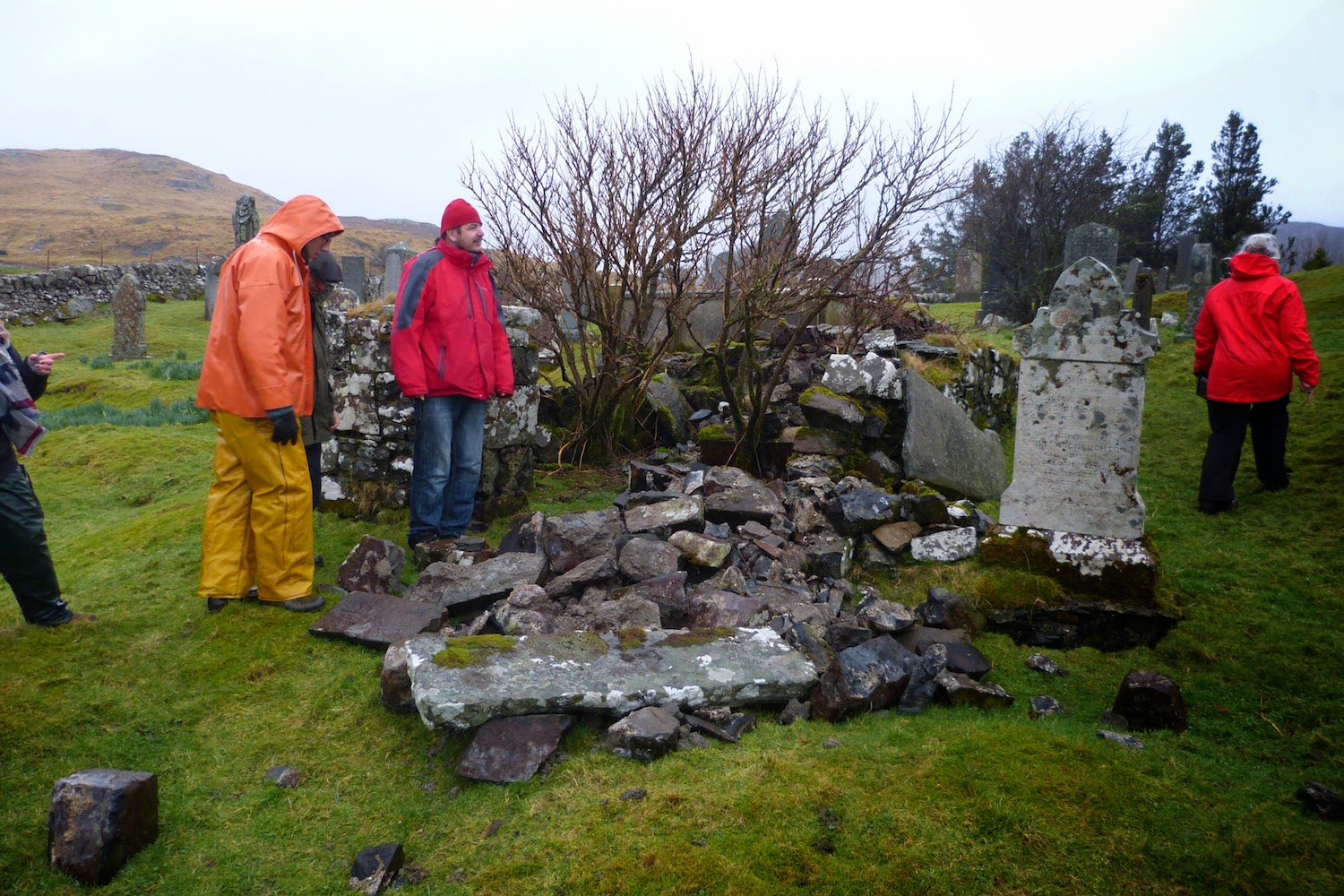 St Comghan's dates back to at least the 13th century, and there was probably a church on the site well before that.  The area is now a scheduled historic monument, the last burials here being about twenty years ago.  Highland Council cuts the grass, but Historic Scotland is responsible for repairs - and the first thing the group noticed was that a wall of what we take to be a small family mausoleum has fallen down.  This will be reported to Historic Scotland and, hopefully, a repair will be effected, but it serves to illustrate the danger of rapid deterioration of many of the graves. 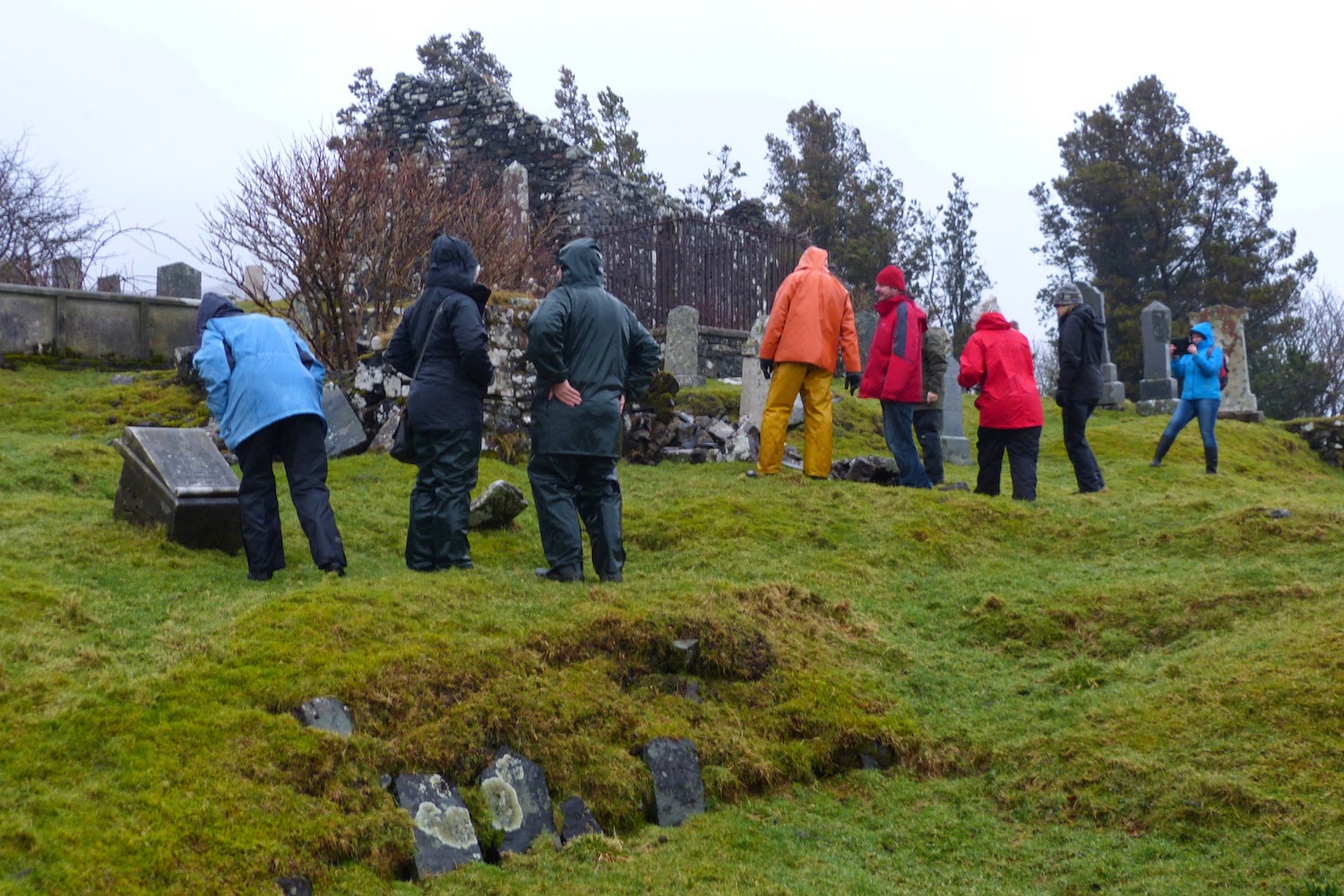 The project which is planned by Ardnamurchan Community Archaeology will be to map the graveyard, record the location of each grave, and add as much information as possible about the person interred there.  It's hoped to put this on-line so it's accessible to people who cannot visit the church. 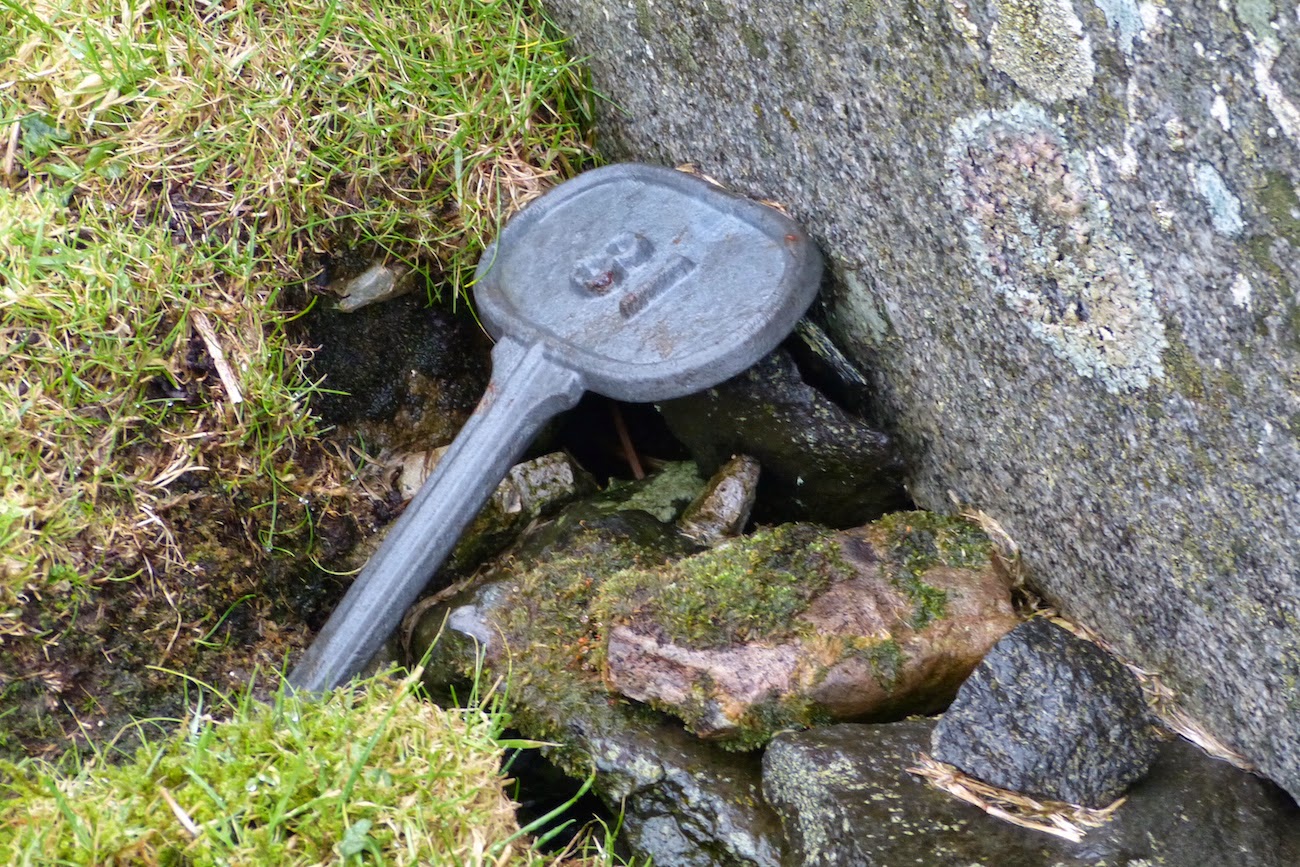 In places in the churchyard there are these metal markers, which suggest that, at one time, a record of burials was maintained, but we don't know where that record is held - if it still exists.  If anyone has any suggestions, we'd be grateful. 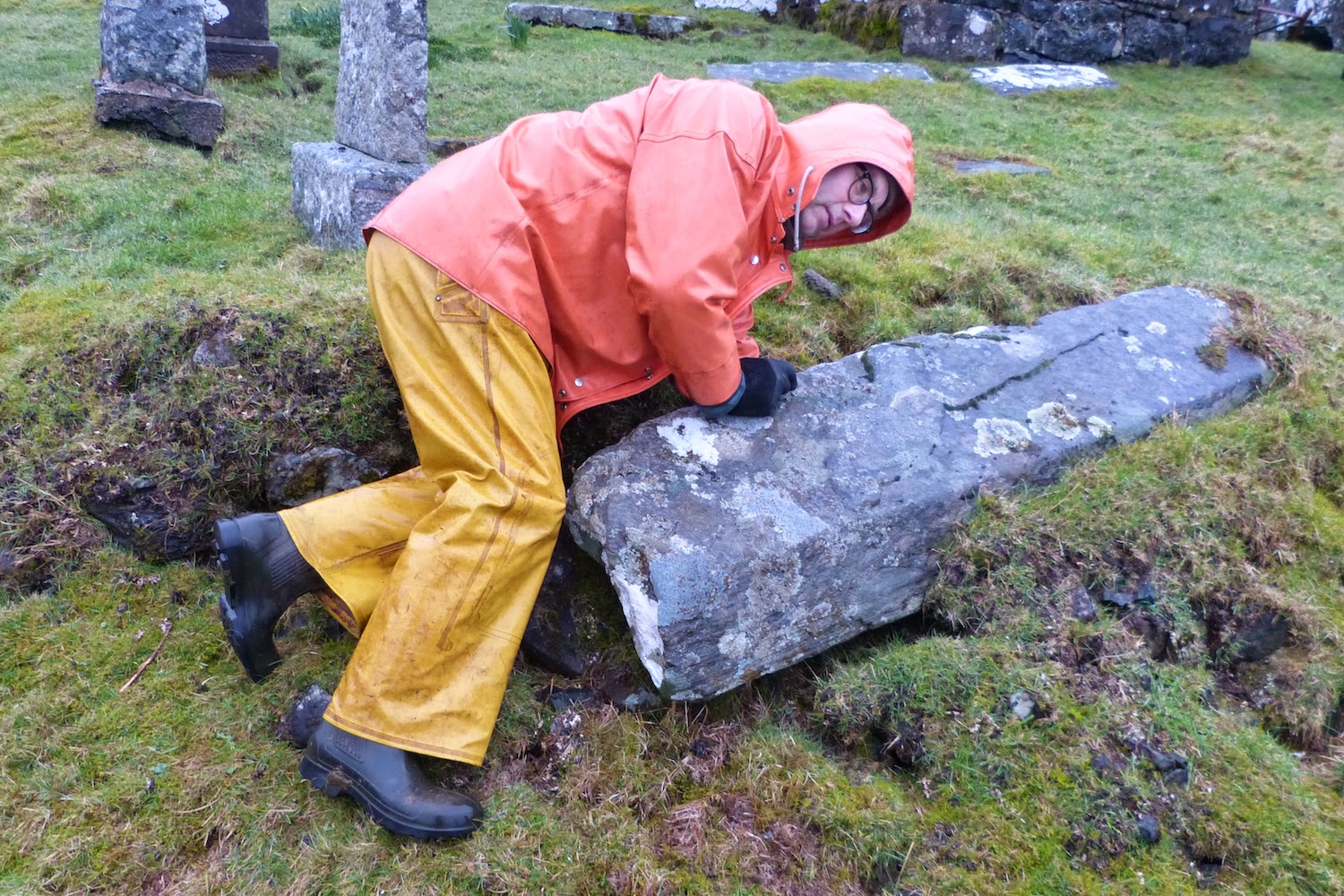 The churchyard has some nationally important monuments in it, including two grave slabs of the Iona school of carving, dating back to the 14th or 15th centuries - see the MacIain website here.  However there are several other slabs of stone which might be overturned grave slabs.  Because the whole site is an historic monument, we cannot move them, but the carvings on some of them might be accessible with a bit of ingenuity.
Posted by Jon at 16:41