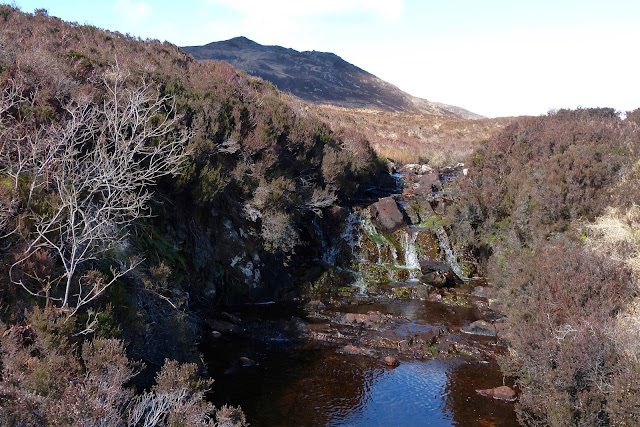 Usually, there's some sort of objective when we set out on a walk but on a day in late April we had nothing more than a starting point, a burn to follow upstream from near the Kilchoan dump - or, as it's now called in recognition of its hugely improved role, the Kilchoan Recycling Centre. 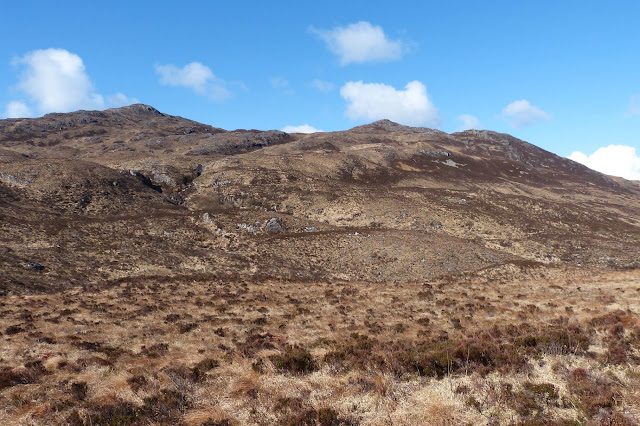 The burn led up into part of what I have always thought of as western Ardnamurchan's central wilderness, a rolling, open area of heather, grasses and occasional stands of bracken, a place whose attraction lies in its featurelessness, though it is surrounded by hills and views, not all of which are readily recognisable. These, for example, are the northeastern slopes of Beinn na Seilg and Stacan Dubha. 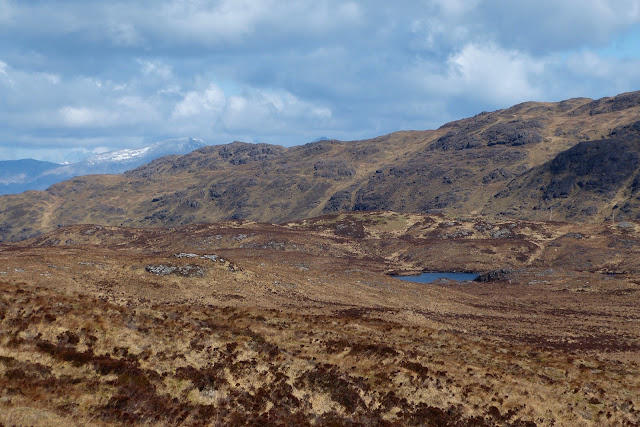 Walking westwards - or, rather, stumbling, as the going is fairly hard - the ground rises steadily and the views grow better. Here we were looking north across Lochan an Aodainn by the Sonachan to Beinn na h-Imeilte. 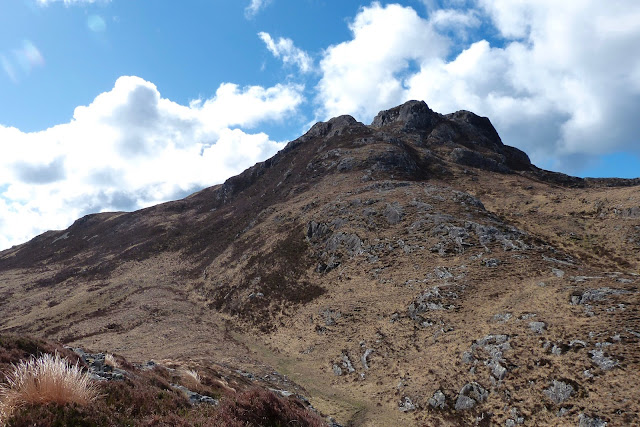 The further we walked the more the gaunt Beinn na Seilg seemed to tower above us. This is the hill's north face, which hardly sees the sun through the winter. 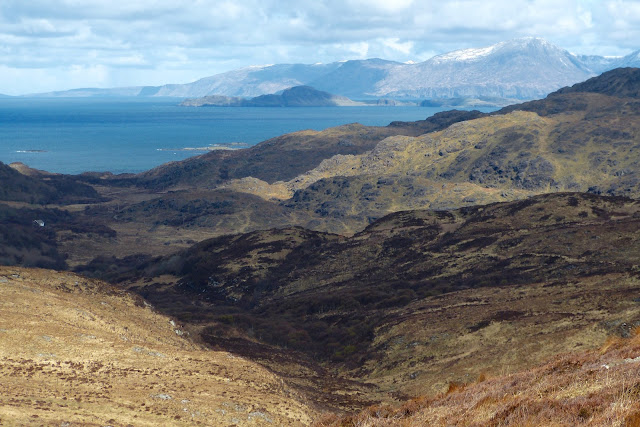 Still climbing, we began to see through to the north coast and across the Minches, the islands of Muck, Rum and Canna being visible. Birch woodland is tucked into this fold of the bare hills, a fold which holds a burn, the Sruthan Braigh nan Allt, which runs down to reach the sea near Portuairk. 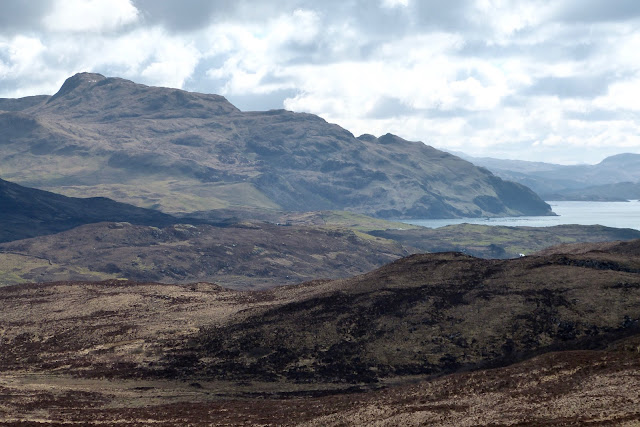 Higher, and we could see right across to the south coast, to Ben Hiant and into the mouth of Loch Sunart. 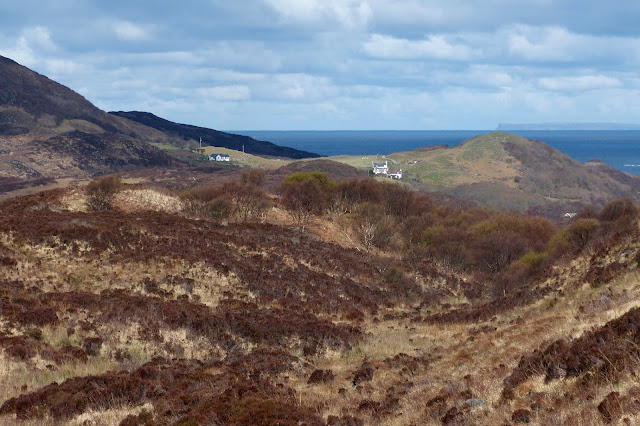 Circling to the north, with views of Achosnich and flat-topped Canna beyond it, we began to descend, skirting the edge of the woodland and coming round until we stopped for a rest.... 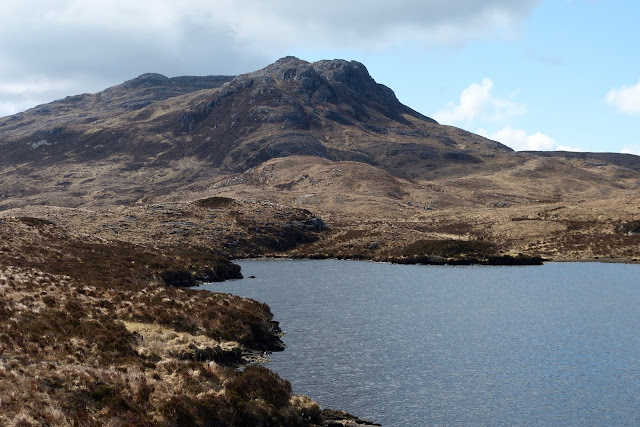 ....beside Lochan an Aodainn with a backdrop of Beinn na Seilg. Here we sat and watched pied wagtails and pipits working their way around the water's edge picking at what we took to be insects on the surface, while sand martins caught them over the centre of the lochan. 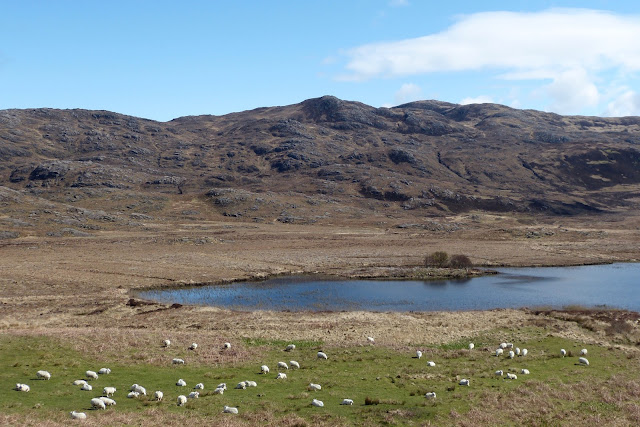 We escaped the wilderness as we came down to the road by Lochan na Crannaig where the ewes were gathering ready for lambing, after two hours of fairly hard walking. 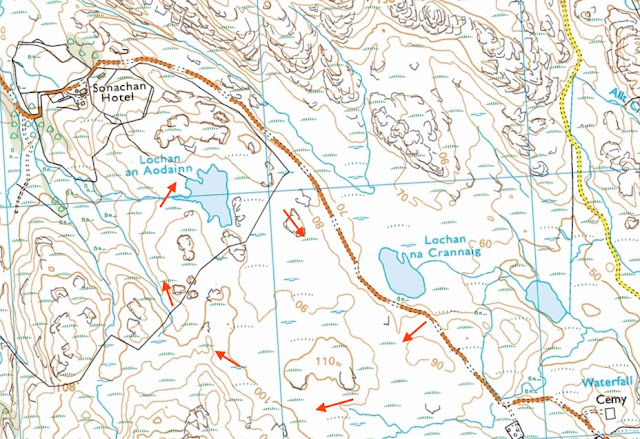