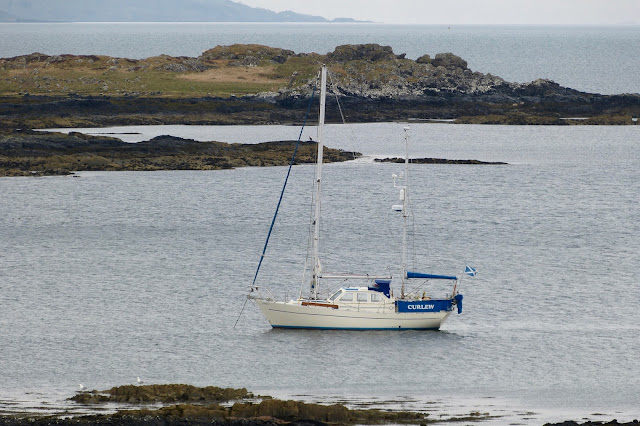 April's fine weather saw a return of the yachts to the Sound of Mull, this elegant boat, Curlew, anchoring in Kilchoan Bay for a couple of nights. Those entering the Sound varied from gentle cruising yachts.... 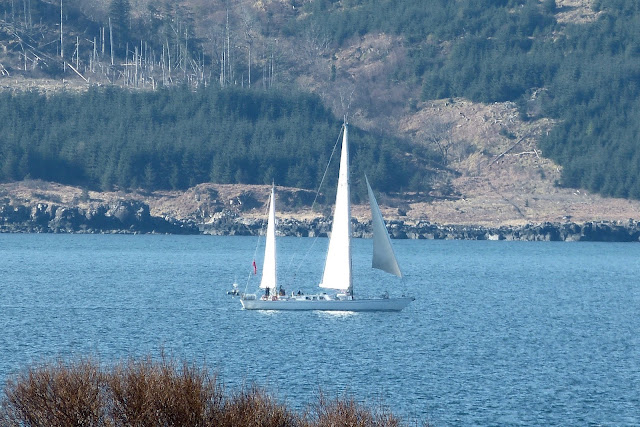 ....through to lean racing machines, this sleek machine making good speed in a gentle breeze from astern. 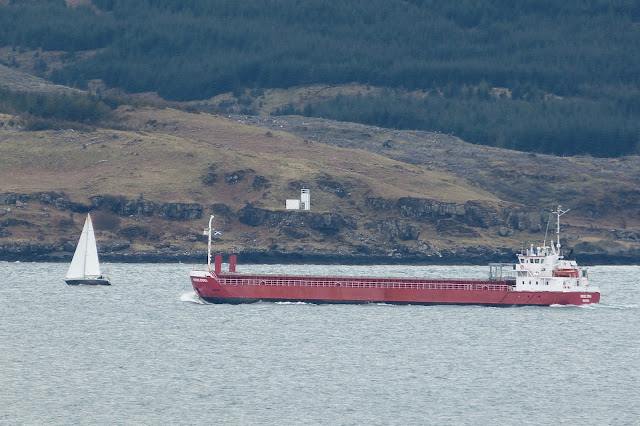 While bulk carriers are ships built to a bare minimum, some have an elegance of their own. This is the Nordic Erika which, if she is to continue to use the Sound as we progress into summer, increasingly has to thread her way through the yachting traffic. 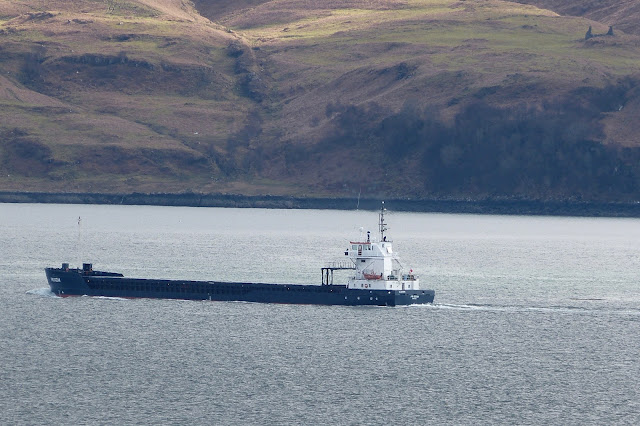 A limited number of merchant ships are prepared to use the Sound, so we tend to see the same ships. The Norwegian Kopervik Group's vessels are an example. Most of them have the prefix Fri, so this is the Fri Ocean, one of our more frequent visitors. Regular readers may remember that, in June 2013, she ran aground 2½ miles south of Tobermory, fortunately with no ill effect. 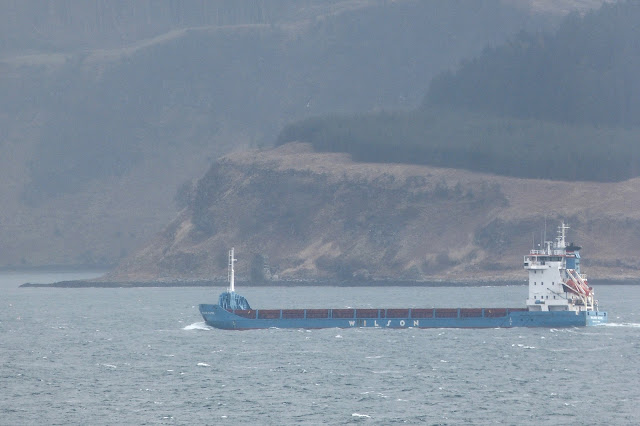 This is another Norwegian ship, the Wilson Lines' Wilson Clyde. Wilsons has a large fleet of upward of a hundred vessels, and makes a point of naming most of them after the ports which the fleet serves - so there's a Wilson Corpach, though we haven't seen her yet. 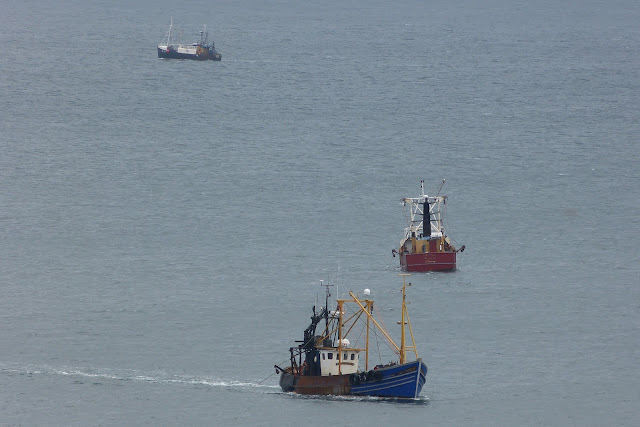 The Sound may be a newly-designated Marine Protected Area but neither the clams - scallops - nor the prawns qualify for any protection. As many as five trawlers were at work on the prawns in the week beginning 7th April, including the Jann Denise, FR80, foreground, built in 1971 and equipped for both scallops and prawns, the Shannon Kimberly, RY169, painted red, whose home port is Ramsey, Isle of Man, and.... 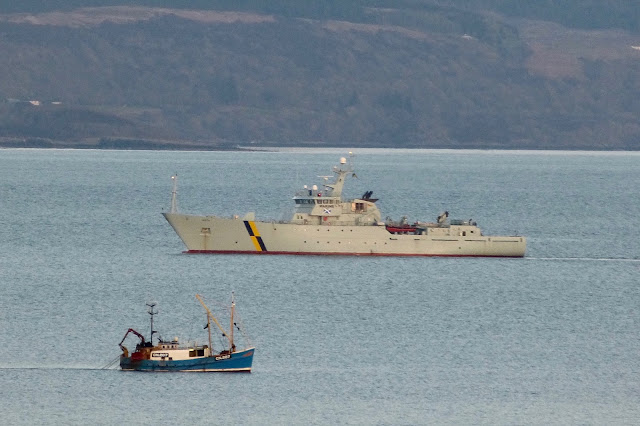 ....the Campbeltown trawler Alliance, CN207, while the Scottish Fisheries Protection ship Jura was there to keep an eye on things. The trawlers, which have both prawn fishing and scallop dredging capabilities, had gathered as there was a sudden flush in the local prawn population. 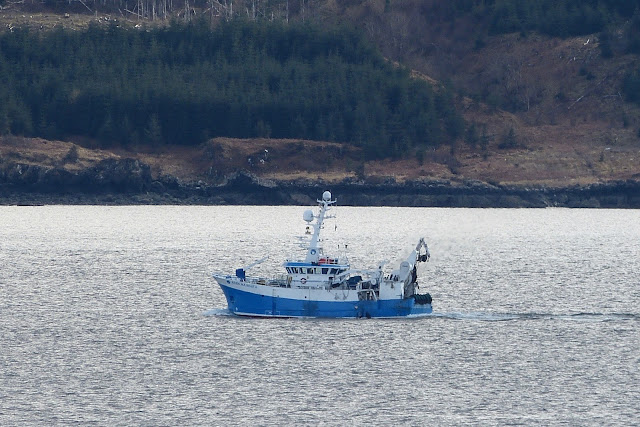 It seems appropriate therefore that the Alba na Mara spent some time in the Sound during April as she is a Scottish Government research vessel which monitors our fisheries, including trawling and scallop dredging. 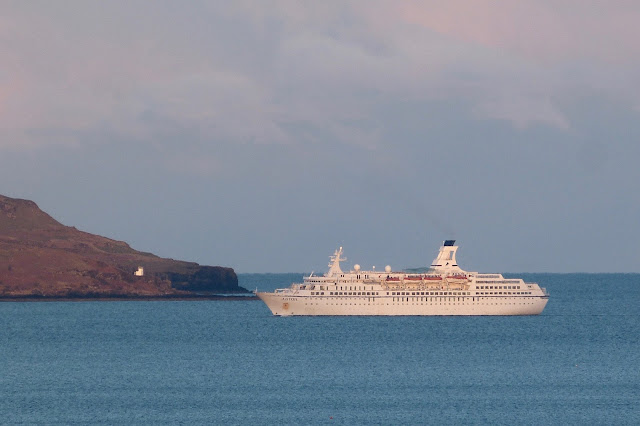 We're moving into the cruise ship season, with Tobermory scheduled to receive more cruise ships this year than ever before. This is the German owned Astor, seen at dawn passing the Ardmore light on Mull but from a different angle - Camas nan Geall. 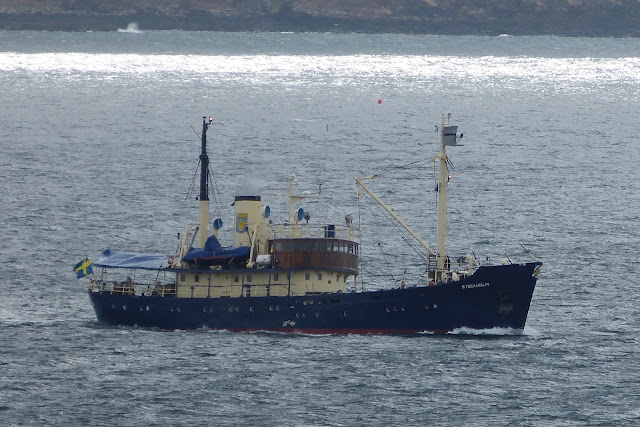 On a very different scale, the Stockholm, built in 1953 for the Swedish National Maritime Administration, was refitted in 1999 and is now described as 'a small expedition ship' for cruises in exotic places like the Arctic, Svalbard, Orkney and Shetland, St Kilda and the Norwegian fjords. She carries a maximum of 12 passengers who, back in April, were treated to a close view of the very exotic Ormsaigbeg shoreline. 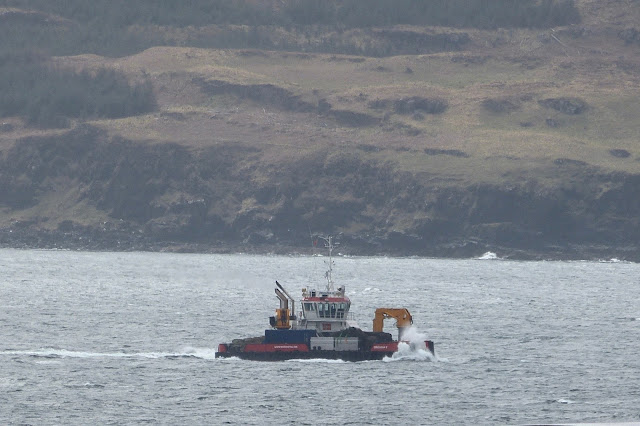 Scotmarine's Orcadia II is the marine equivalent of a Swiss army knife, described by its owners as, "one of the most powerful Multicat work vessels in the world and the largest possible in its classification. The vessel's capabilities include a certified 50.5T bollard pull, 100T anchor handling winch, 60T towing winch and twin 290 HS Marine knuckle boom hydraulic cranes each capable of lifting 11.3 T @ 16.5m and 41.6 T @ 5.0m." Some machine!
Posted by Jon at 06:00