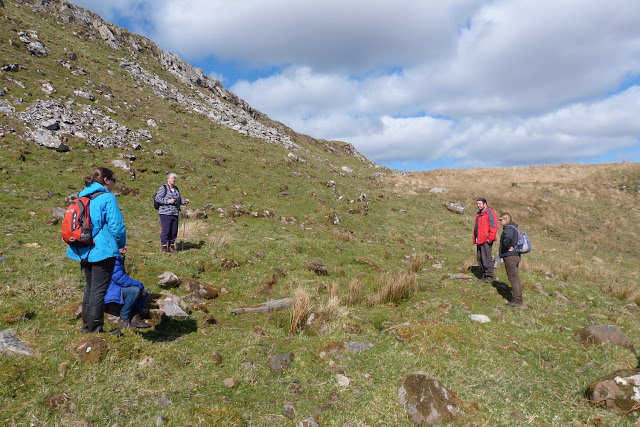 The newly constituted AHHA has grown out of, and takes over from the success of the Ardnamurchan Community Archaeology group. ACA, in its two-year life, found, described and reported to either Archaeology Scotland or Highland Council’s Historic Environment team over 120 archaeological sites, the majority of which had not previously been reported. New finds included a neolithic chambered cairn (Erikson’s Cairn), six stone circles, some of them bronze/iron age hut circles and some kerb cairns, twenty-four shieling settlements, eight farmsteads, and four possible illicit whisky stills. Picture shows members with Archaeology Scotland's Phil Richardson and Cara Jones discussing a structure at Bourblaige. 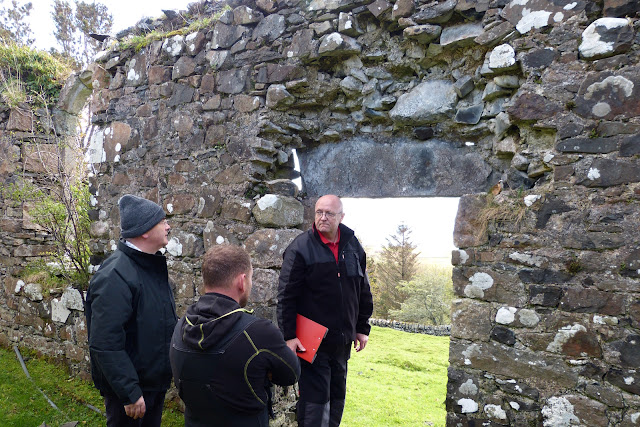 At St Comghan's church in Kilchoan, ACA worked successfully with architect Francis Shaw (left) structural engineer Brian Smith (right) and builder J-P Ashley (centre) to obtain historic monument consent for repairs to the south facade, and carried out a graveyard survey. It also worked with ‘Adopt a Monument’ officials at Archaeology Scotland to clear the 18th century (and possibly much earlier) cemetery, Cladh Chiarain, at Camas nan Geall, and has now obtained historic monument consent to rebuild the fence round the cemetery

It has also run archaeological field trips, presented talks for local people and visitors through the Kilchoan Learning Centre and, in front of an audience at the Learning Centre, conducted interviews with locally-born people who recalled their early days. 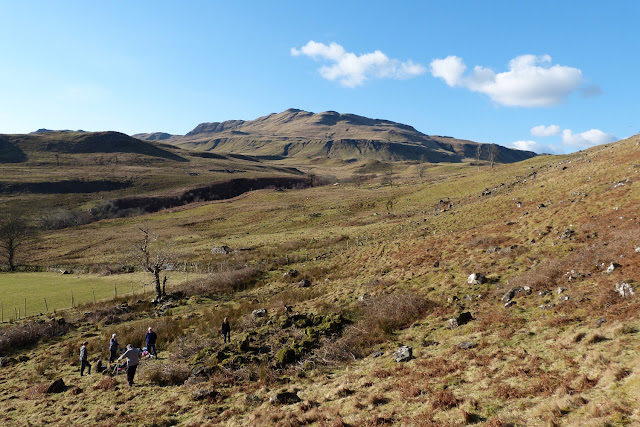 AHHA will continue with and broaden these interests to include setting up a local archive and exhibition and building a website so information about the heritage of Ardnamurchan is more widely available. It plans to add to existing publications by preparing booklets about sites such as Camas nan Geall (above) and Glendrian, erect interpretative boards at important sites, develop an education pack, and offer a guide service to visitors who are coming to Ardnamurchan in search of their ancestral roots. It is also anxious to conduct interviews with, and publish the memories of local people who recall the crofting heritage of the area. To help achieve these ambitious aims, it is currently applying for a grant from the Heritage Lottery Fund.

AHHA may have plans, but to succeed it needs new members who are keen to become involved in one or more of the project areas. As well as local members, we have members amongst those who have holiday homes on the peninsula and those who come up on a regular basis to stay in the area. Membership is free, and no previous experience is required. If you are interested in becoming involved, please contact AHHA's secretary at kilchoandiary@btinternet.com
Posted by Jon at 19:05