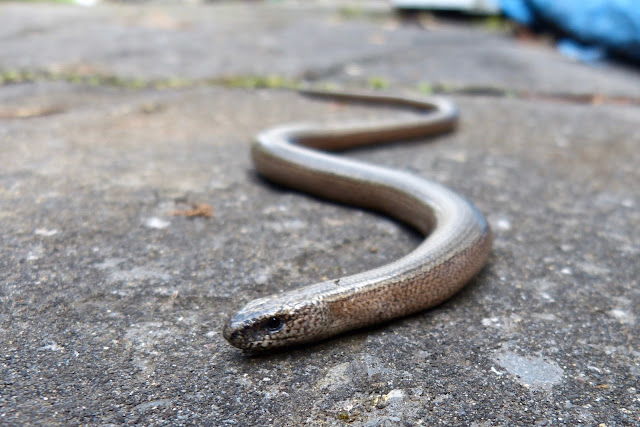 This is the first slow worm we've seen this year, just over a foot long and trying to make his way across the paving stones in our back yard. But he had a problem: the paving stones aren't particularly smooth but he simply couldn't gain traction across them so, wriggle and squirm as he might, he remained a very slow slow worm.

We live in the crofting township of Ormsaigbeg, the settlement's name being derived from the Norse ormr, a snake or serpent, and vik, a bay, with the Gaelic word bheag, small, added. We do get a few adders, famously the black one which lived at the back of the property through the summer of 2014, post here, but we see plenty of slow worms. To the Vikings, one slithery reptile was probably much the same as any other, so I do wonder whether the Vikings named this place after slow worms rather than real snakes.
Posted by Jon at 19:22