We're at the stage in the year when the last of the vegetable garden's autumn crops are coming in. The raspberries, whose first crop had a miserable showing in the poor weather early in the year, have more than made up for it through September and October. A good few of the late pickings (above) went into the freezer.

We grew two varieties of potato this year, Maris Piper and Estima. The latter is seen here. It came out of the ground with a rather warty skin, but cropped heavily and produced a good, fluffy potato on the plate. 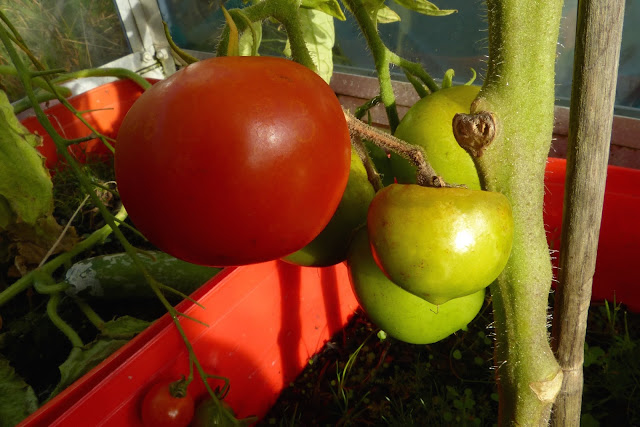 The last of the tomatoes are coming out of the greenhouse. Despite the weather, they've done well, the autumn sun bringing on the late fruit.

We've been almost self-sufficient in vegetables through most of the latter part of the summer and the autumn, though we have to buy things like aubergines and some sweet peppers to supplement the small crop from the greenhouse. But since we sell a good proportion of our veg, we probably break even through the year. 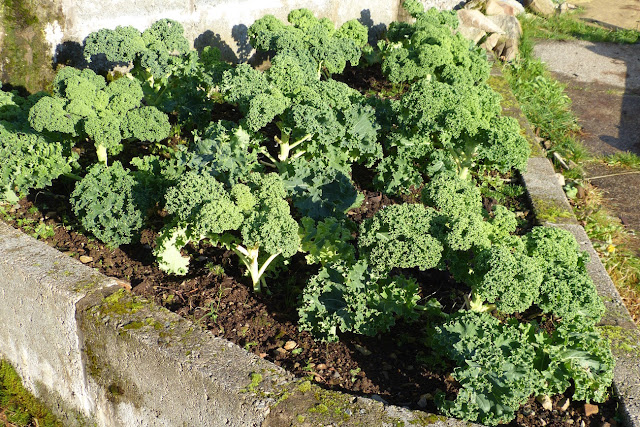 We're now down to the brassicas and root vegetables including carrots, turnips, parsnips and swede. This is the first year we've planted kale (above) and it has been a great success as well as being very good-looking and resistant to the local caterpillars. The first lot of cabbages are ready, and we have a second planting in for later in the winter, by which time we should also be eating brussels sprouts and broccoli.

All this comes out of the poor soils of croft land, but by terracing the area and adding, over the years, mounds of seaweed and all the compost from both the vegetable garden and the kitchen, the soil is as good as anywhere in the country.
Posted by Jon at 11:11