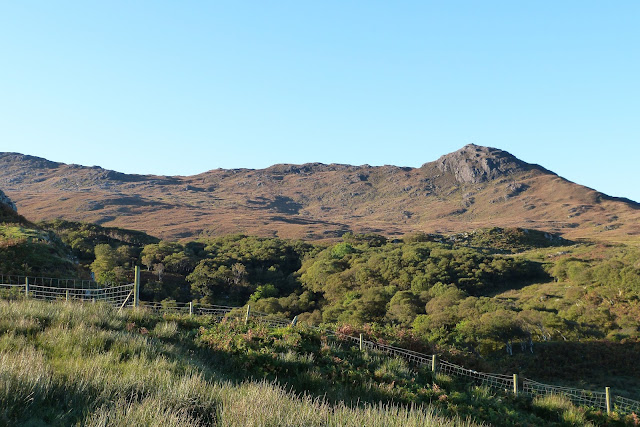 It's tempting to say that we've now walked just about everywhere in the hills and along the coastlines of western Ardnamurchan but this is, in a way, meaningless since, every time we go on a well-worn route, we stray slightly from previous occasions and almost always find something new.

But there was, until today, one area into which we had never ventured, the ridge that runs along the skyline in this picture, to the south of Fascadale and running southeast from the - sadly - unnamed 262m peak to the right of this picture, which was taken from Fascdale and looks across the forested Gleann Fascadale. 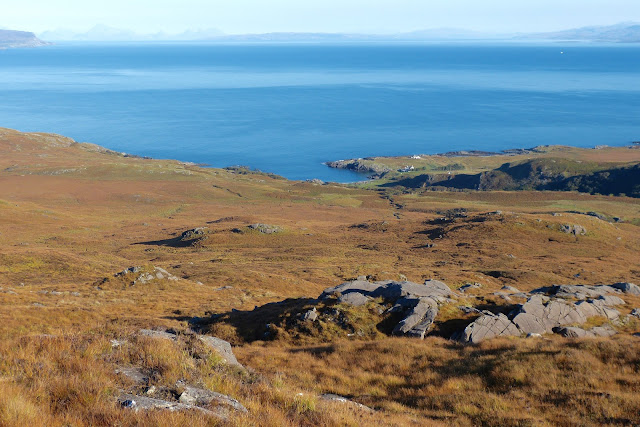 The walk up from Fascadale is an unremitting uphill slog across rough ground but, in the glorious weather we had today, it was a pleasure to stop frequently to sit and look back across Fascadale to the Small Isles. Having disturbed deer on Wednesday's walk, we were anxious not to do the same again, and were only aware of one stag roaring some way away to the east of us. 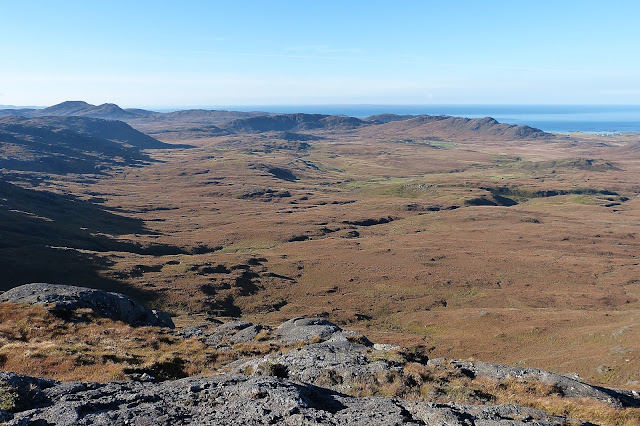 The ridge is formed by the coarse gabbroic rocks of the Ardnamurchan Tertiary volcanic ring complex, so as we reached the top we were confronted with a breathtaking view down into the central 'guts' of the 60-million year old volcano. This view looks southwest. Breaking the horizon to the left is Beinn na Seilg, with Creag an Airgid the shadowed hill in front of it. At centre is the ridge called Beinn na h-Imielte, and in the right distance is Meall Sanna, with the township of Sanna just to the right. 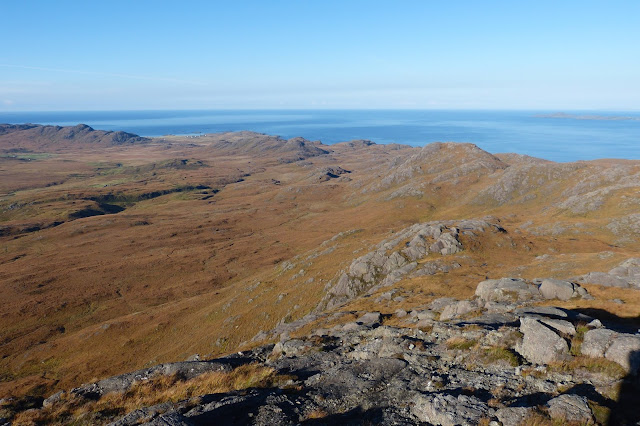 This picture continues round from the previous one, and shows the northern part of the ring. To the right of Sanna, in turn, are the peaks of Meall Clach an Daraich, Sgurr nan Gabhar, and Meall an Fhir-eoin; the burn that cuts across the middle distance is Allt Mhic Cailein. 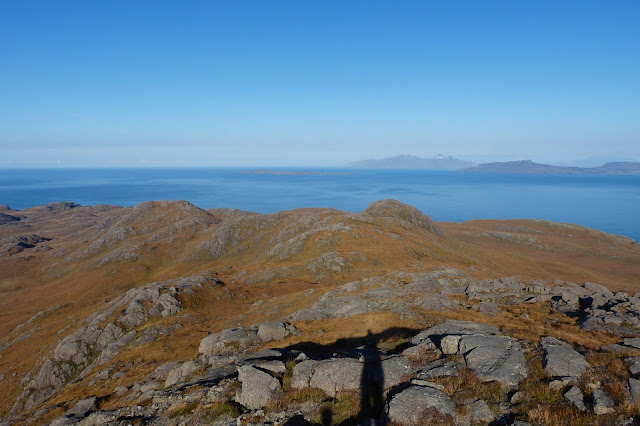 Further round, the lump to the right of centre in this picture is the un-named 262m peak with, beyond it, Rum on the horizon and Eigg to the right. 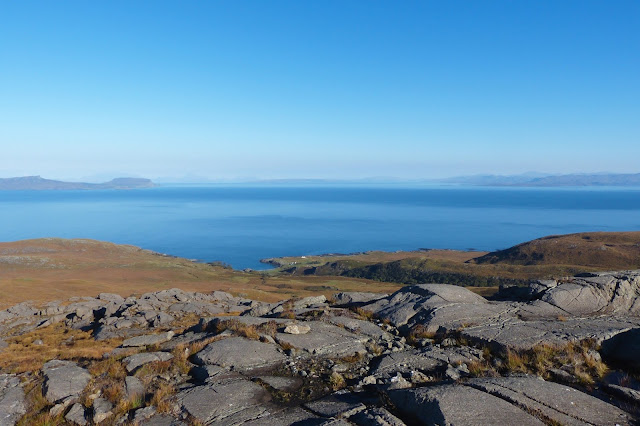 Turning to look almost north, Eigg is to the left and the hills of Skye and the adjacent mainland lie beyond it and to the right.... 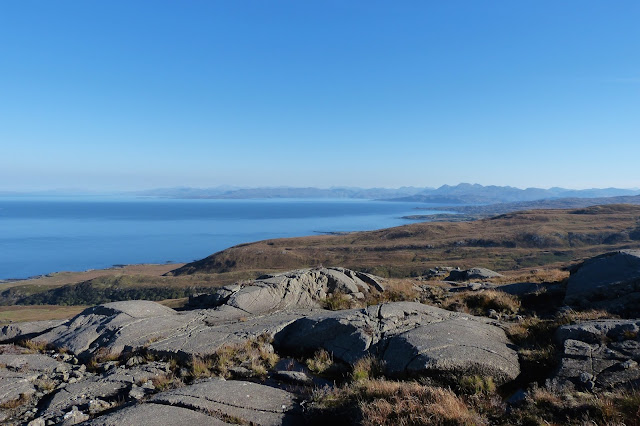 ....while this last picture in the sequence looks along the north coast of Ardnamurchan towards the hills of Moidart. 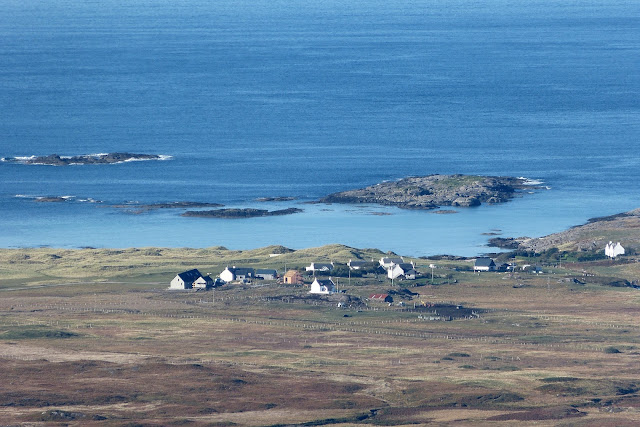 The clear air enabled some detailed pictures using the zoom. This is Lower Sanna, over four kilometres away, while.... 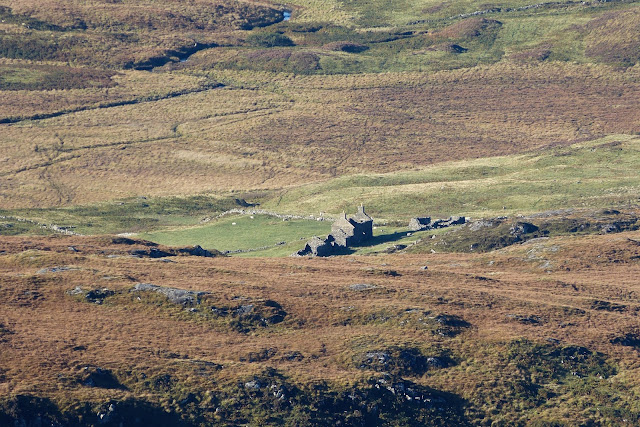 ....this is the abandoned township of Glendrian, almost in the middle of the volcanic ring. 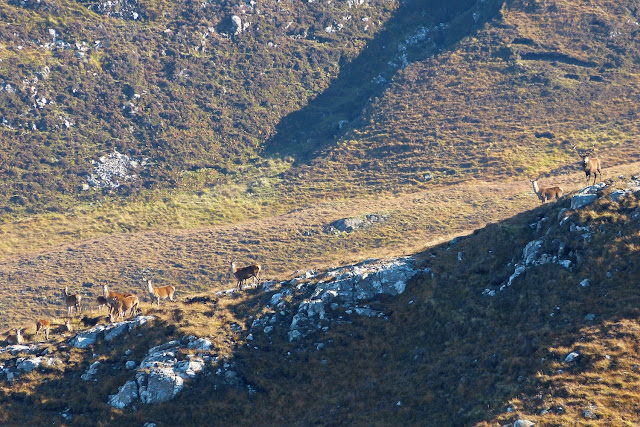 As we were turning to descend the hill to return to Fascadale we finally spotted the stag with his hinds. They were almost a kilometre away, and had probably been watching us for some time.
Posted by Jon at 16:30