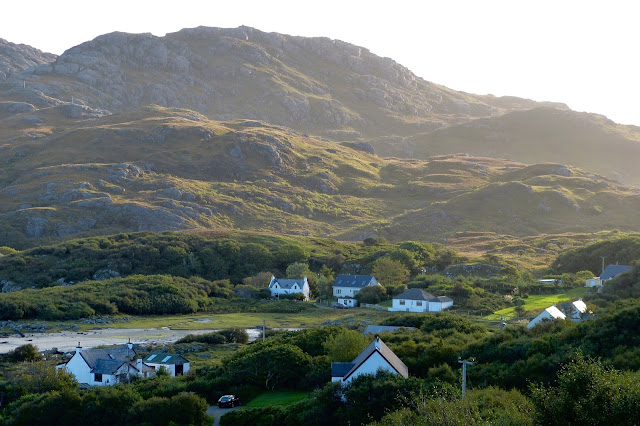 We walked at Portuairk yesterday, setting off early, just as the sun was coming over the hill. From its west end we climbed the hill behind the township, following the edge of the common grazings fence until we were on the.... 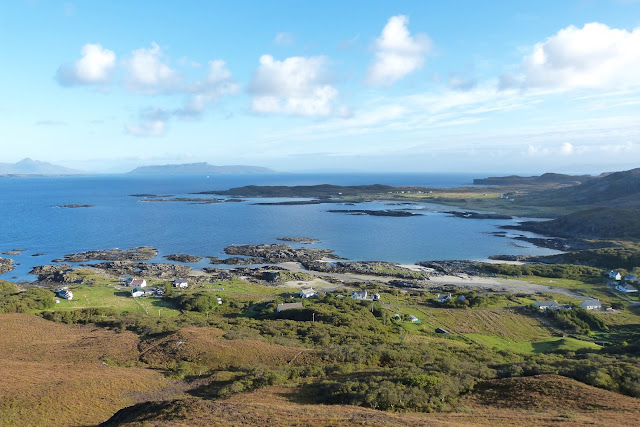 ....open moorland, working our way higher towards a small peak which is marked on the OS map with a 146m spot height; and the higher we climbed the more spectacular the view became, with the whole of Sanna Bay before us, and beyond it the dispersed township of Sanna, with Eigg and Rum in the distance. 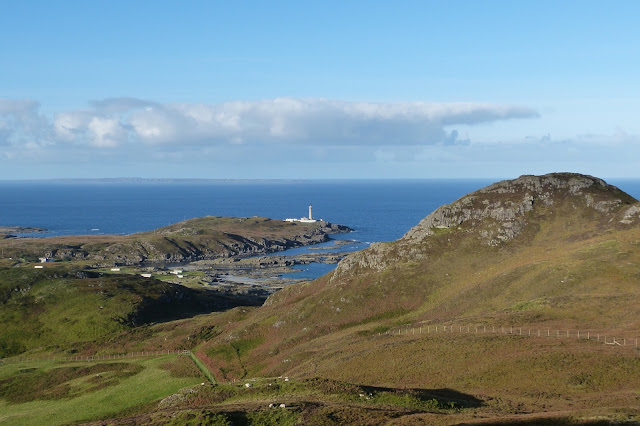 As we reached the summit of the small peak, the lighthouse came into view beyond the hill that's marked on the OS map as Sgurr nam Meann but is known locally as Coire Bheinn, a peak which has two caves near its rocky summit which were inhabited in prehistoric times. To the left are the green fields of Grigadale Farm. 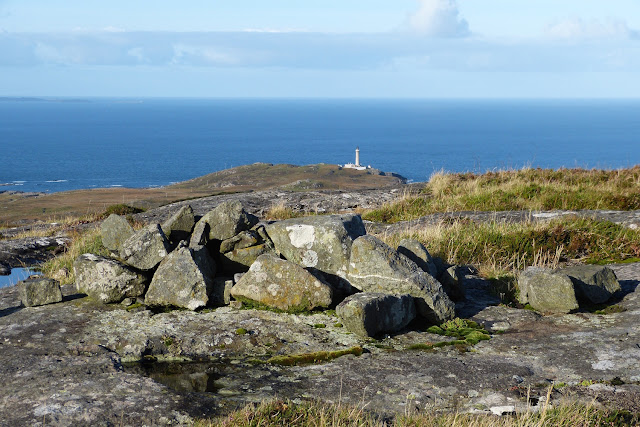 Working our way along the ridge we came to the summit of Beinn Bhuidhe which, at over 210m, is one of the higher hills at the western end of Ardnamurchan. It has a cairn at its summit but an unimpressive one, in part because the hill is grazed by cattle. 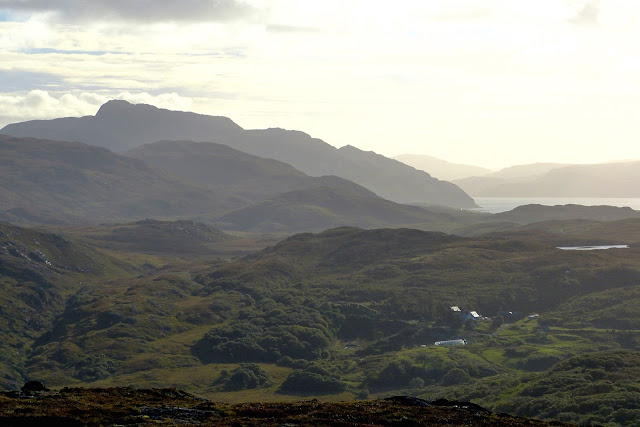 From there, we had a view southeastwards into the sun, looking across the buildings at the Sonachan Hotel to Lochan an Aodainn and hills like Meall Chro Bheinn and Glas Bheinn to Ben Hiant and the entrance to Loch Sunart, with Morvern in the misty distance. 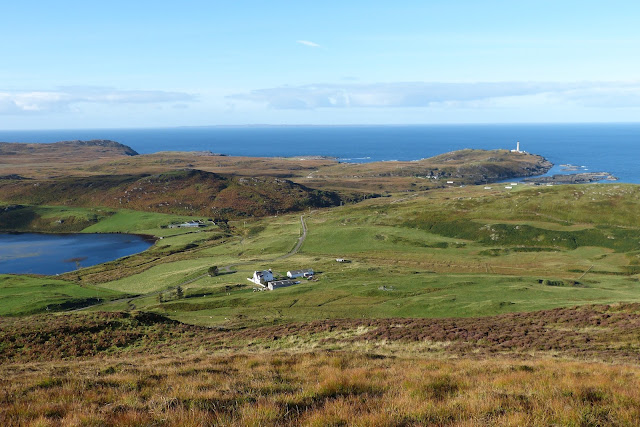 Immediately below us lay the fields and buildings of Grigadale Farm. This area was once occupied by Grigadale clachan, a settlement which was cleared to make way for a sheep farm. The original buildings are now almost completely lost but the beauty of the place is timeless. 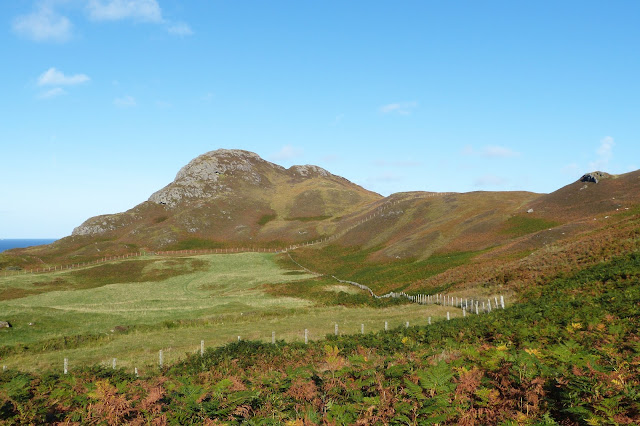 We descended the steep hillside into Grigadale land and turned northwest, back towards Coire Bheinn. Several fences lay in our way but all had gates which were easily crossed until we were back in the rough land on the ben's southern shoulder, which we worked our way through until.... 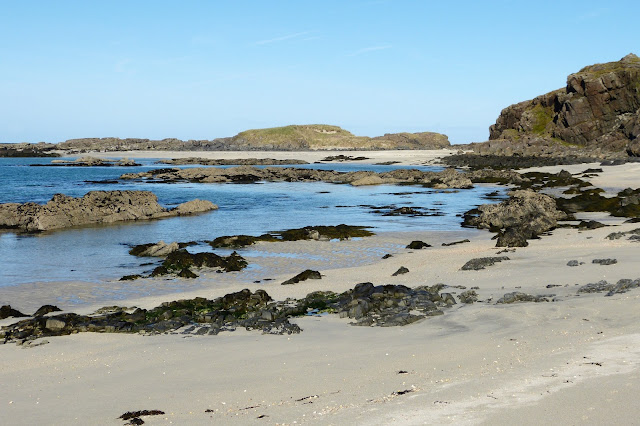 ....we came down into the lovely stretch of sand which leads round to Bay MacNeil. No-one had been along the beach before us, so the tracks of seabirds and sheep were the only blemish - along with those of what was probably a mink. 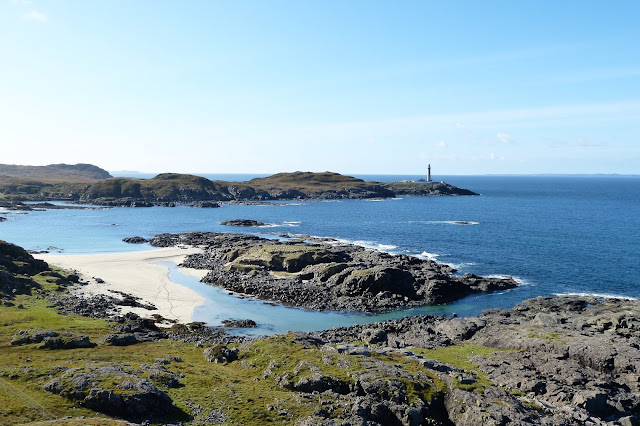 We spent some time sitting on the island in the middle of this picture which protects Bay MacNeil - it's called Eileen Carrach on the OS map - before climbing one of the hills at the back of the bay to spend a few moments enjoying this view towards the lighthouse.
Posted by Jon at 20:12