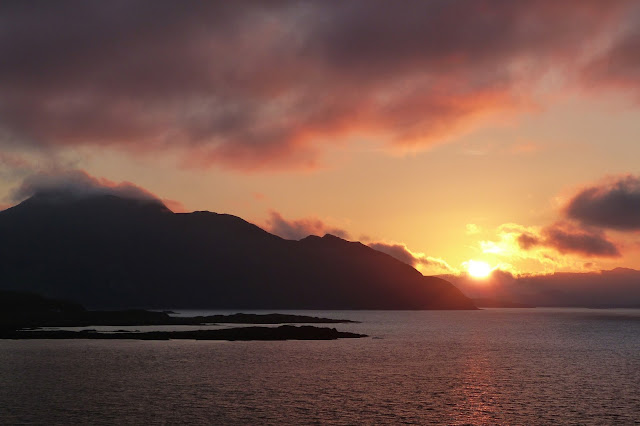 Each day, if the clouds allow us to see it, the sun rises a little further to the south. This morning it came up over Maclean's Nose with all the promise of a fine day, so we set off early for a brisk walk along the sandy beaches at Sanna. 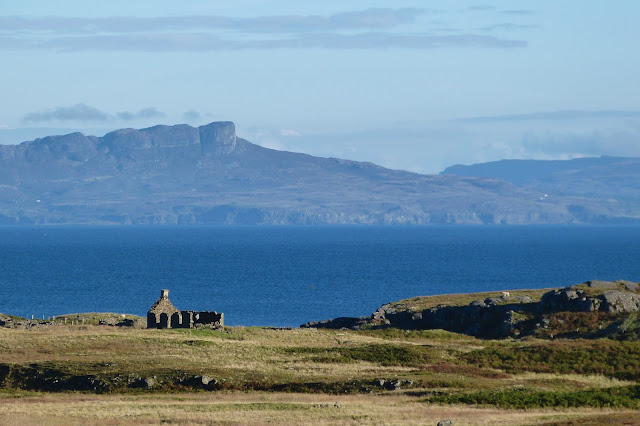 As the road approaches Sanna, there's a view northwards towards Eigg. In the foreground is the one visible house of the abandoned village of Plocaig. 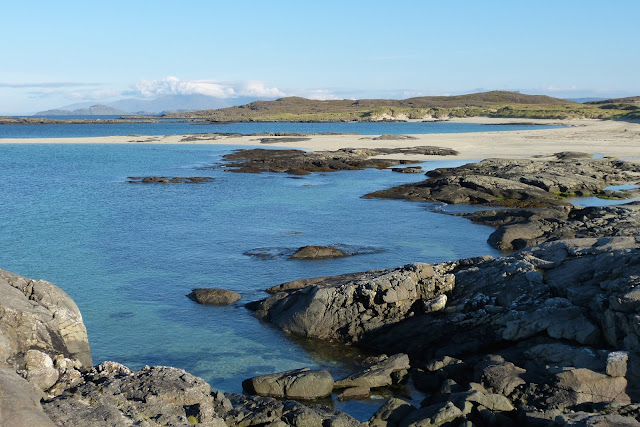 Sanna is beautiful any time, even in a storm, but on an almost cloudless early autumn morning, with bright sunshine streaming low across the land, it's stunning. The water was wonderfully clear, green across the sandy bottom and darker over the weed.

We started at the southern end of the series of beaches, each separated from the next by a rocky point, and worked our way steadily along them. 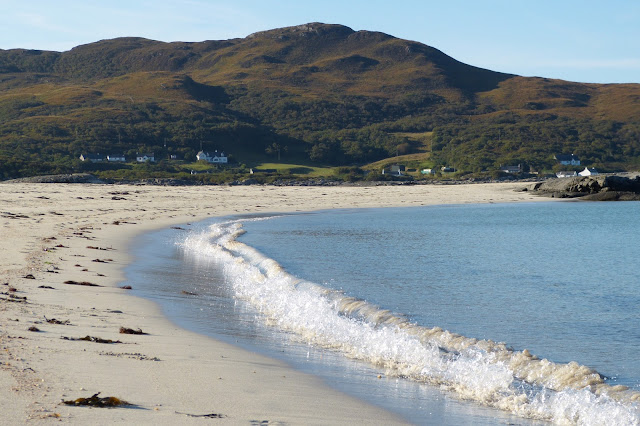 This view looks back along our tracks towards Portuairk from one of Sanna's longest beaches, a gentle curve of sand against which small waves lifted and broke with a muffled explosion. 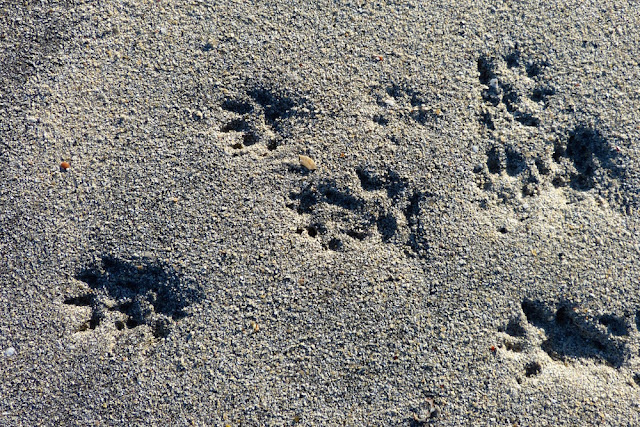 In no less than three places we found these tracks. They were small, about 5-6cm in length, and nowhere could we find any sign of webbing, so we assumed they were mink. The number of sightings of mink has dropped in recent years, but a family of them was reported on the Sanna beaches during the summer, which is very bad news for the other wildlife, particularly the sea birds. 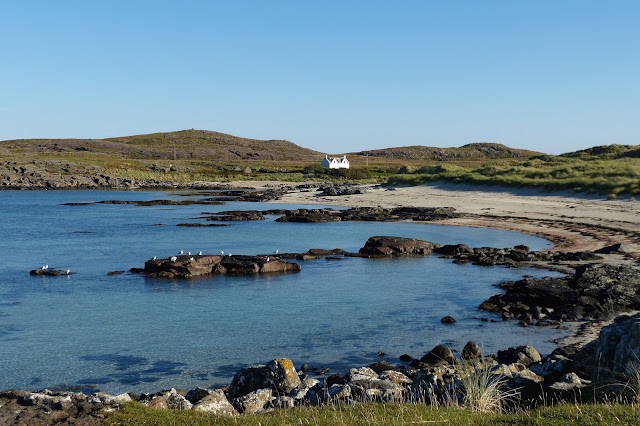 We worked our way steadily along the beaches until we approached their northern end. The small beach on the right is unusual in being covered with shells, mostly the flat periwinkle, Littorina obtusata. The numbers of these shells vary from season to season but, as can be seen from the pinkish colour, the beach is covered with them at the moment. 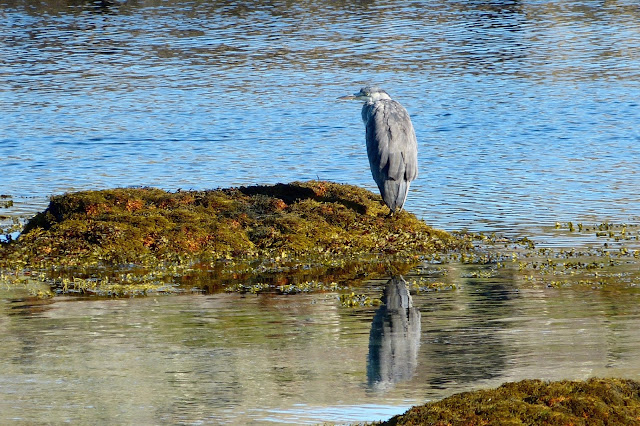 The Sanna Burn enters the sea at the northern end of the beaches. Just off its mouth we came across this grey heron sitting with his head hunched into his neck. He watched our approach then, very lazily, flew away. 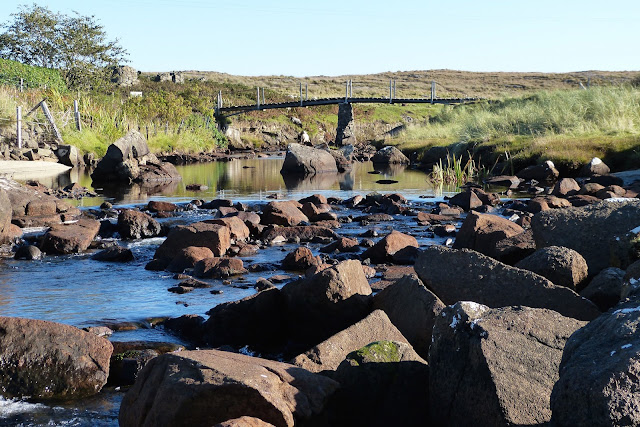 Normally we have to cross the Sanna Burn by the footbridge but we've had so little rain in the last few days that the water was low enough to cross by the rocks, so.... 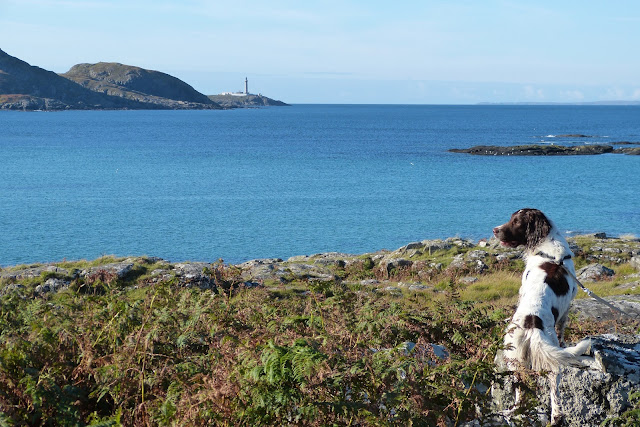 ....we walked along the headland that forms the northern side of Sanna Bay, looking across the bay towards Ardnamurchan Point lighthouse. 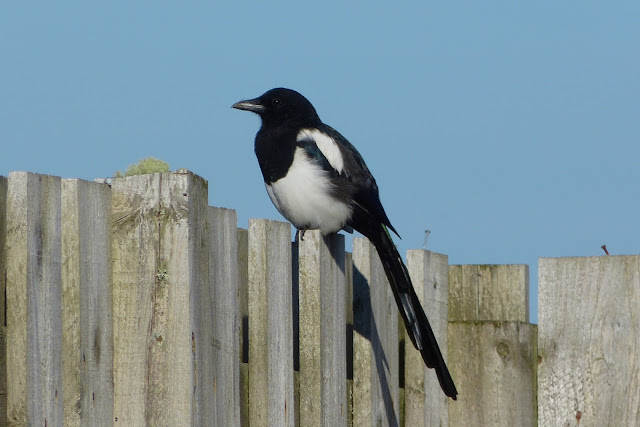 As we drove out of Sanna past the waterworks, we had our first close-up view of the local magpie. We've seen it on a number of occasions at Sanna, but always flying away from us, and it has been reported from Portuairk. To my knowledge, this is the only magpie on West Ardnamurchan.
Posted by Jon at 15:51