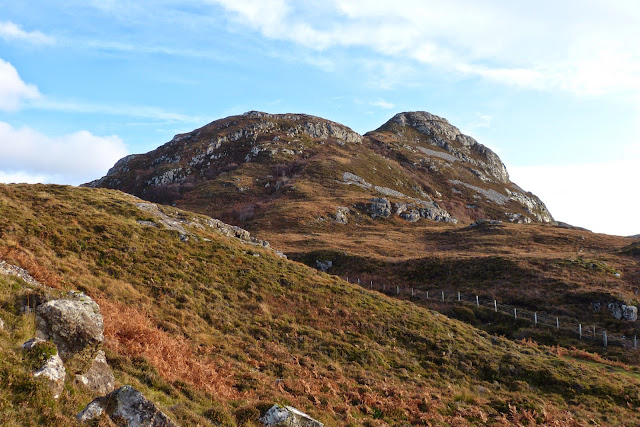 Some time ago, the Diary carried a post - here - about the caves on the side of this hill, which overlooks Bay MacNeil and is visible from the lighthouse road at the back of Grigadale farmhouse. 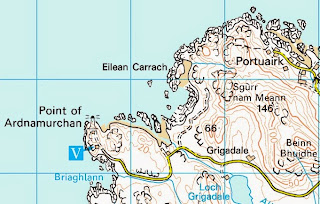 It is marked on the OS map as Sgurr nam Meann.  A few days ago, an anonymous comment was added to the post, which read, "It is not Sgurr nam Meann it is called Ciorre Bheinn stop changing names, ask any Local who I am sure will confirm."  So I did.

The local I spoke to was Alastair MacColl, who lives in nearby Portuairk.  Alastair confirmed that what the anonymous commentator had written was correct: the hill is called Coire Bheinn.

I checked the earliest detailed map of West Ardnamurchan, William Bald's map of 1806.  He marks the hill very clearly but, sadly, doesn't give it a name. 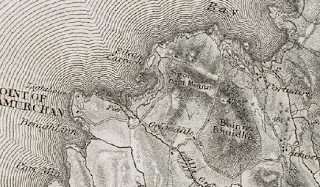 The name Sgorr nam Meann appears in the first OS map of the area, the 1" First Series 'Coll' published in 1885 - clipping to the right.

When the early surveyors from the OS first mapped an area, they recorded the names of features in a 'Name Book'.  These have recently been made available online through Scotland's Places - link here.  The question is, to whom did they talk, because it is quite likely that they would have been given different names by different people?  In its introduction to the Name Books records, Scotland's Places says, "The collector, usually an officer in the Ordnance Survey, would consult local historians and etymologists (authorities) in order to fix the spelling (the received name) of each 'object' (natural feature, inhabited place, building and so on)".  And herein, perhaps, lies the problem - that the people they consulted were middle class, literate, and perhaps an incomer, rather than a local person who knew the long-used names of the features.  Sometimes the Name Book records more than one possibility - the only way to find out whether this applies to Coire Bheinn is to see the Name Book for this area.

Inevitably, as the collective memory of the old names dies, the OS map will become the repository of Ardnamurchan's names - Coire Bheinn will forever be called Sgurr nam Meann.  Unless, of course, the remaining locals who know the correct names make the effort to record them.  I, for one, would be pleased to help in this process.


Many thanks to Alastair MacColl for his help.
Posted by Jon at 11:24