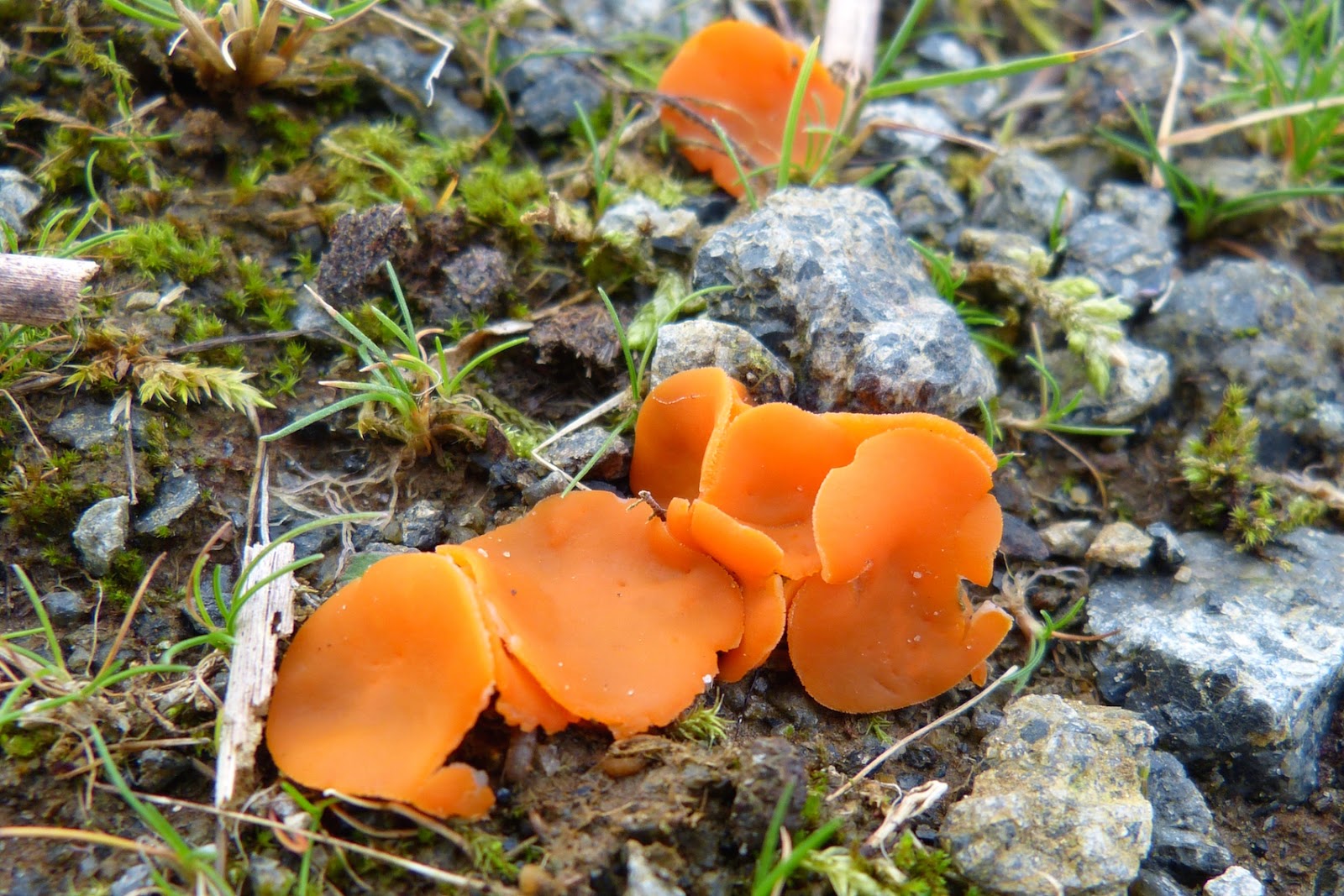 The last few months have seen an explosion of fungi, with varieties appearing which we've never seen before.  This is a good example of the pretty ones.  We've only found it in one place this year, growing on gravel near the gate on the track which leads to Glendrian.

Identifying fungi is a nightmare, so this post comes with a health warning, something along the lines of, "While every attempt has been made to provide an accurate identification, extreme caution should be exercised...." etc.  That said, we think this is the orange peel fungus, Aleuria aurantia, which is described as not very common in the UK. 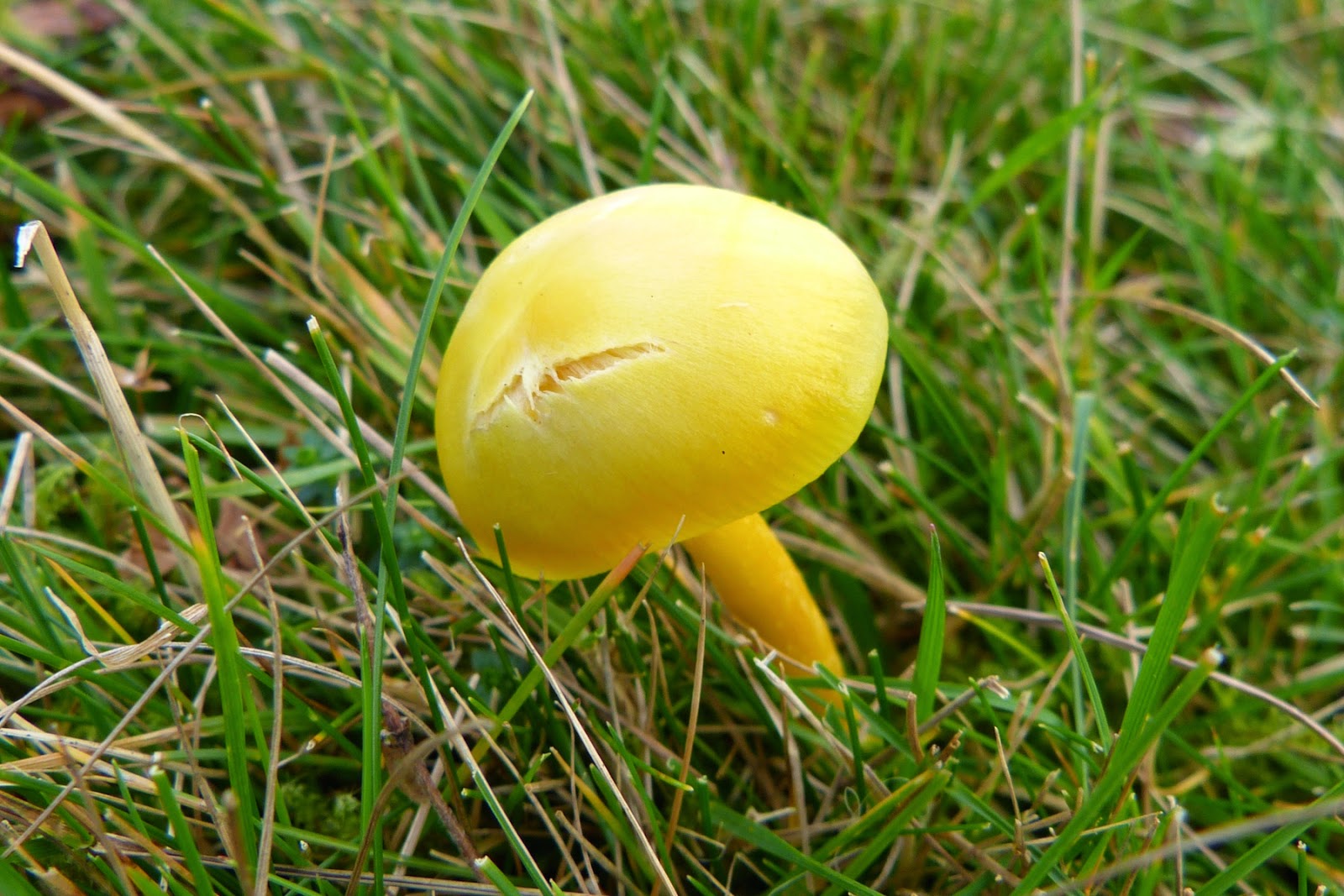 This one might, just might be a butter waxcap, Hygrocybe ceracea.  It's the right shape and has a yellow stem.  The websites which try to help one identify fungi say that looking at the gills on the underside is important, so.... 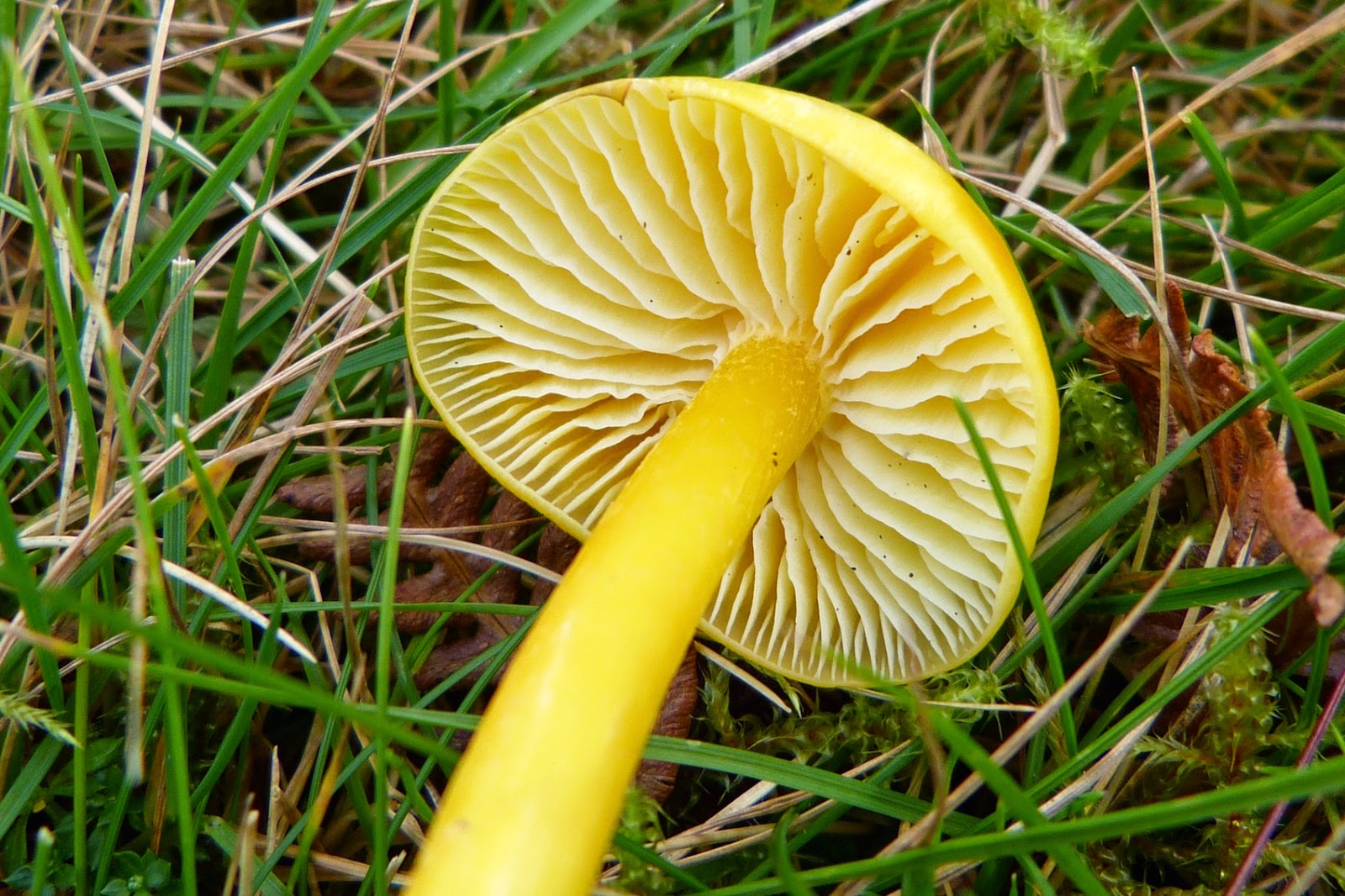 ....very reluctantly we pulled this beauty up, took another picture, and then shoved it back into the grass in the hope it might continue to grow. 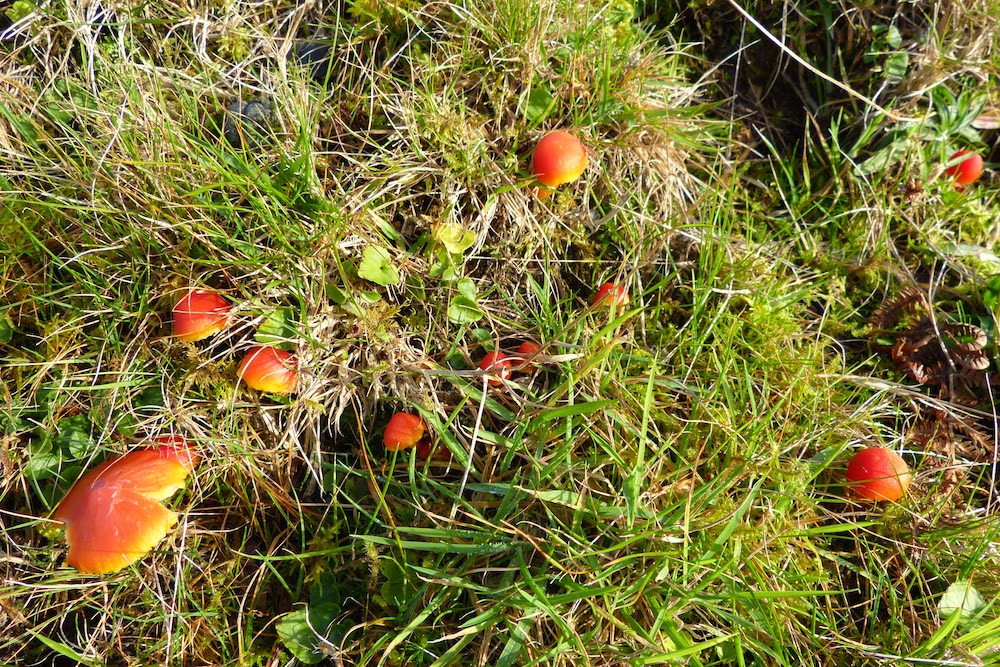 In places, whole hillsides are infested with fungi, this one by the sheds at the south end of Loch Mudle.  These may be Hygrocybe splendidissima, the splendid wax cap, or it might be Hygrocybe coccinea, the scarlet waxcap, or even Hygrocybe punicea, the crimson waxcap, or.... it might be something quite different. 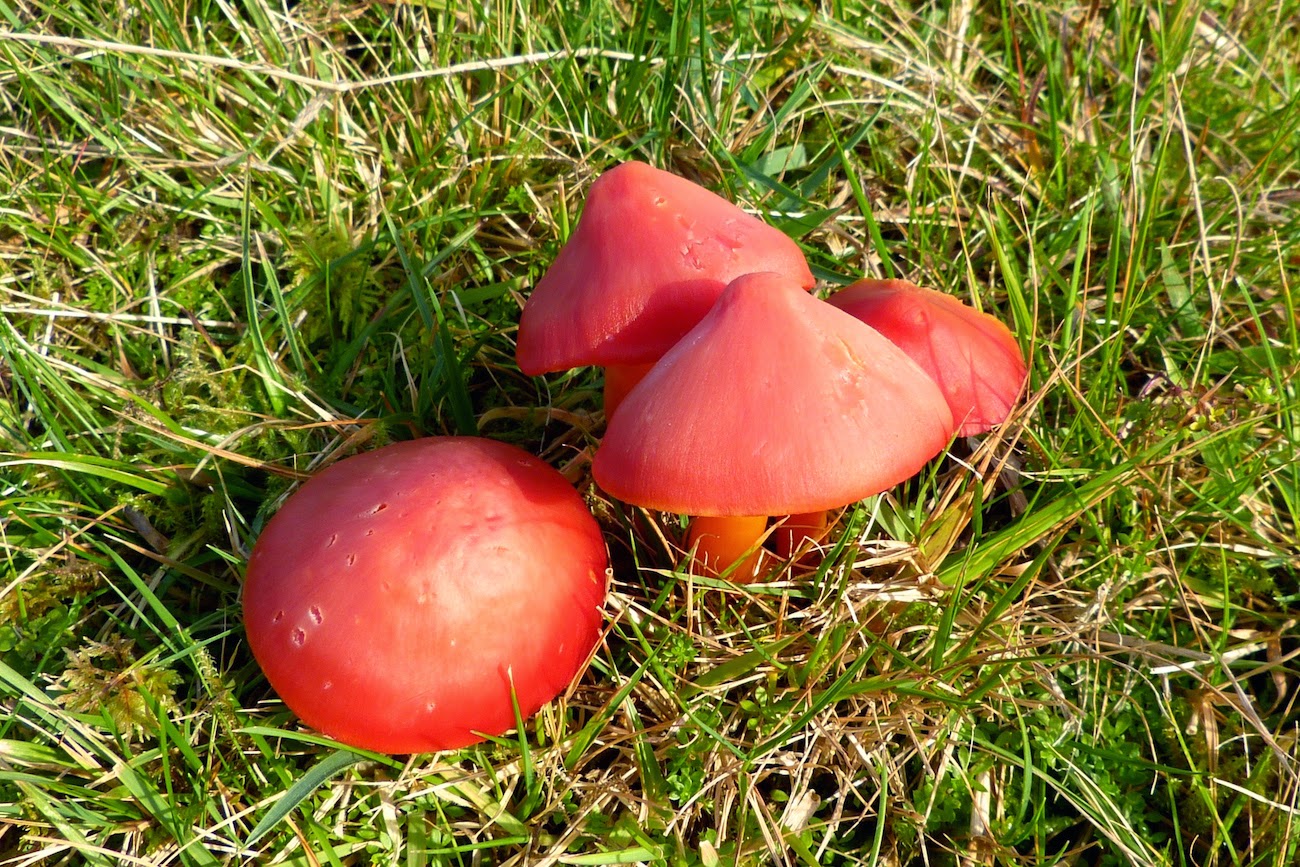 To make matters worse, these look very similar but have a more pyramidal shape and are a brighter shade of red.  Whether they're different, and whether.... 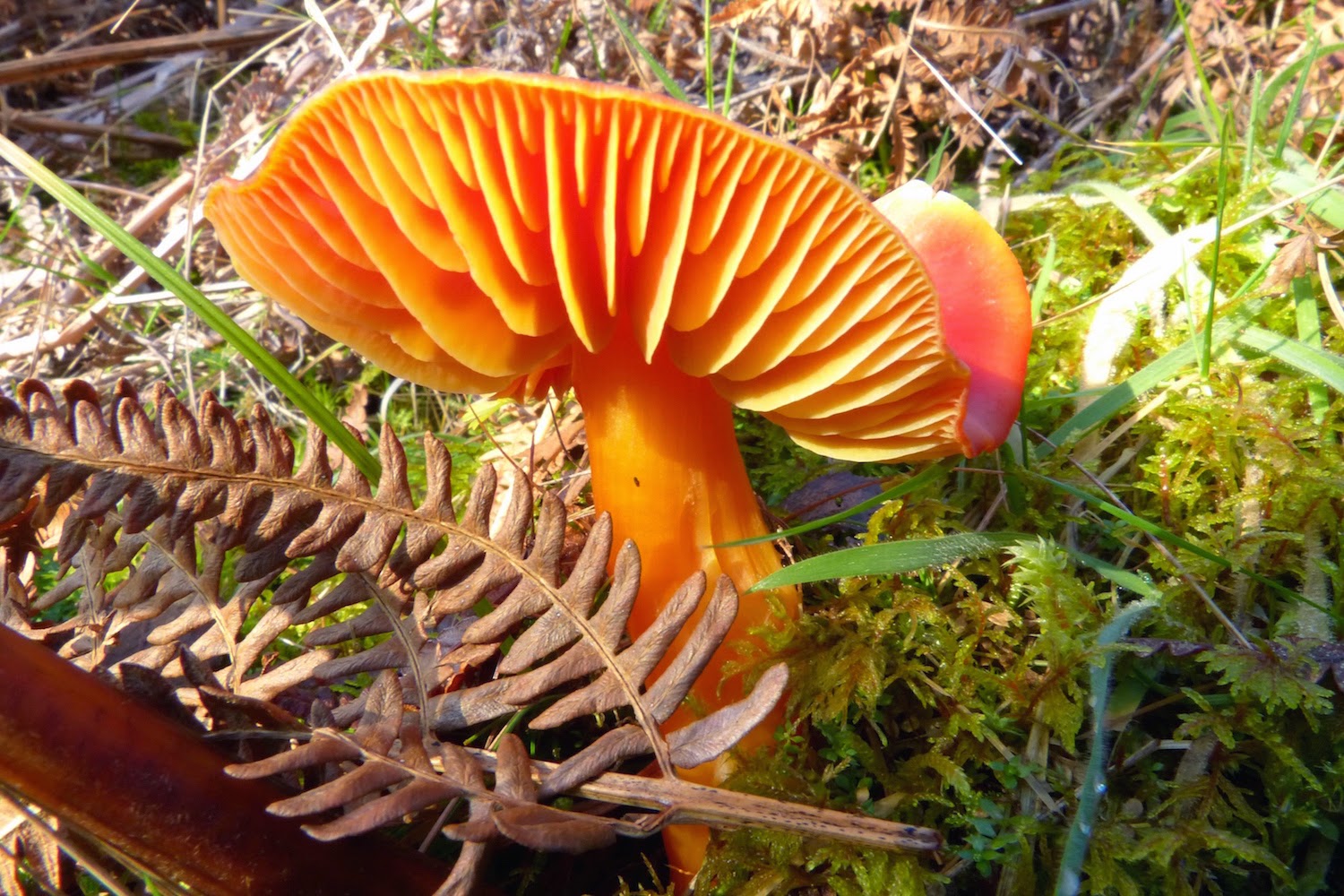 ....either of the previous red ones is the same as this one, is a mystery to us.  The very good website here, which shows pictures of 25 different waxcaps, is very well laid out but.... sorry, leaves me lost - but not as lost as on this site, which has hundreds of pictures of fungi, illustrating what a hugely successful group they are. 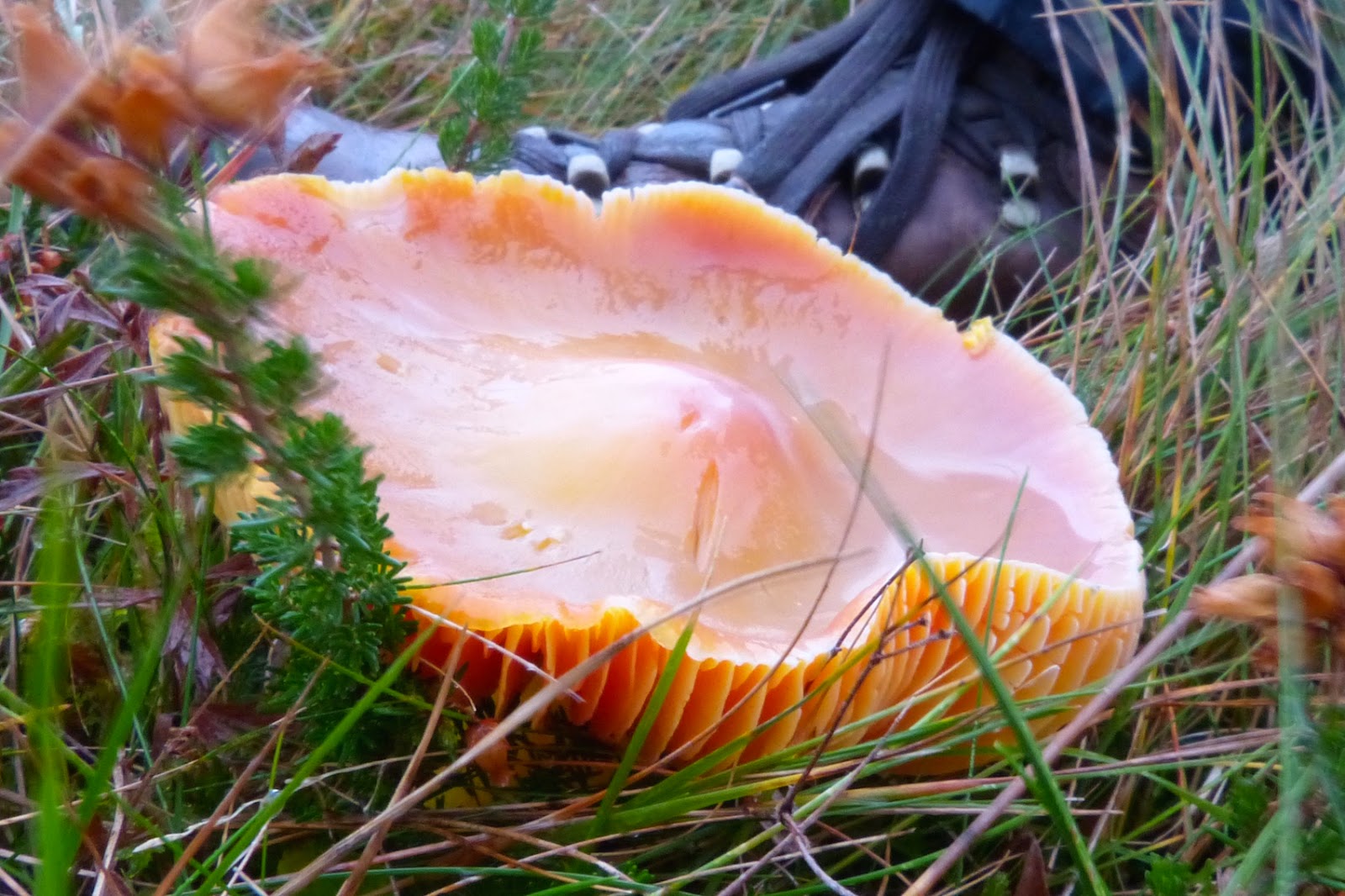 Then there's this one.  It might, just possibly, be the same as the previous one but it's huge - look at the ladies' boot placed behind it to give a scale.  Research on the web suggests it is another waxcap, except older and, therefore, both bigger and more turned inside-out, and that it's edible, in which case it would feed a family of four - if they were prepared to take the risk.
Posted by Jon at 16:21