Late September 2014 brought a sixth consecutive annual visit to Ardnamurchan. Recent years had set a pattern for the fortnight’s autumn holiday in the Highlands, the first week on Skye and the second on Ardnamurchan. The Skye week was notable for mild temperatures and calm conditions, albeit with some night-time squalls, and enough days of blue skies or high cloud to make the most of the hills and views. Gratuitous moody Cuillin photo follows:

A slightly lumpy Armadale to Mallaig crossing, resulting in the usual chorus of alarms from cars onboard the ferry, delivered us back to the mainland. The drive through Moidart to Salen and then westward further into Ardnamurchan brought us, in contrast to what one gets used to on Skye, into a more naturally wooded landscape with some glorious autumn colours. Arrival at the holiday cottage at Glenborrodale put us in amongst some of that brightly-coloured native woodland in a wonderful, tranquil location on the shoreline of Loch Sunart – this would do very nicely.

Whilst the forecast held the promise of better weather to come, Sunday’s weather was a little gloomy, so the first day’s activities were limited to a short wander through the land surrounding the cottage followed by settling down in front of the goggle-box to watch the very satisfactory conclusion of the Ryder Cup…with a bottle of Talisker to help ease us through. 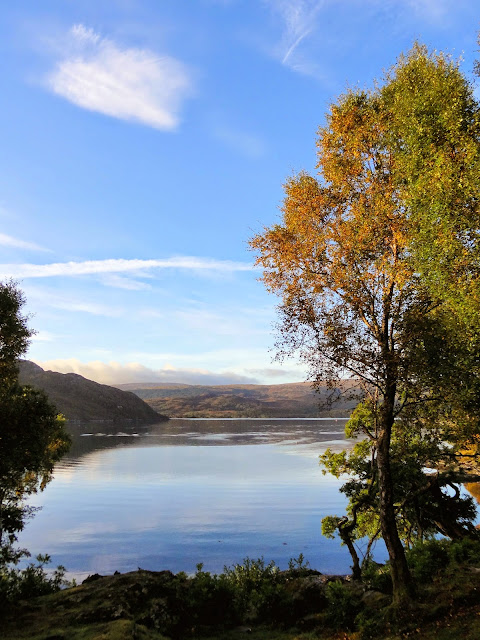 Monday, and the better weather had well and truly arrived. The view from the cottage across Loch Sunart showed the morning mist lifting nicely off the hills of Morvern into a blue sky – Objective, Ben Hiant.

As we rounded the bend at the car park above Camas nan Geall the top half of the hill was still in cloud, but it was clearing and by the time we set off from the wind-turbine layby things were looking good. The going was surprisingly dry underfoot and progress was easy, especially with frequent stops to just stand and stare. However, trouble was brewing, and at about the halfway point one of us was in a bit of difficulty (no names, no pack-drill, but it wasn’t me!). After a longish pause at what became known as “crisis corner”, along with a quick rehydrate and the administering of the wonder-drug that is jaffa cakes, normal service was resumed and all suggestions of abandoning the walk were dismissed – the promise of the holiday’s walking lunch of choice at the top (sausage sandwiches with lashing of Daddies sauce…superb!) surely played a part. And boy was it worth it. 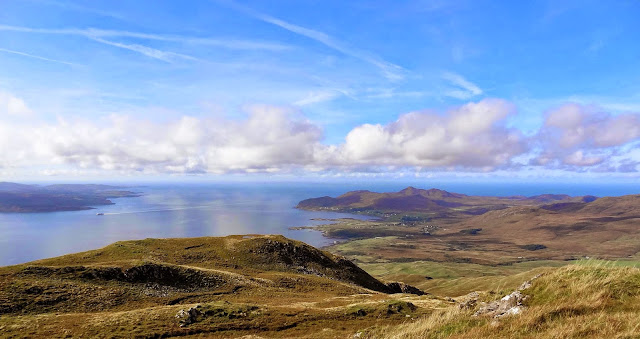 Warm sunshine and air so still that we could hear the engines of a ferry heading south into the top end of the Sound of Mull.

The view over Camas nan Geall, Oronsay and Carna into Loch Teacuis was especially striking. 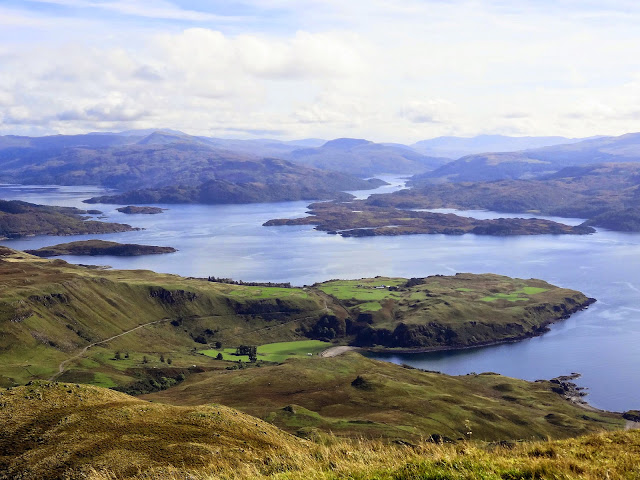 During the previous week on Skye almost every trip out seemed to bring with it several encounters with large black birds, and here we were seeing and hearing more of the things. Now, they may or may not have actually been ravens, but given the mostly unpleasant folklore and mythology which surrounds these birds I did tend to find each sighting worthy of comment…or concern.

Anyway, after about half an hour we noticed a couple of people wending their way up along the path, so we semi-reluctantly packed up and moved on to let them have the top and the fantastic 360 degree view to themselves. Back to the car and a return to base for beers on the terrace.

The cottage’s visitors’ book made mention of tame red deer and pine martens, and by golly was it all true. 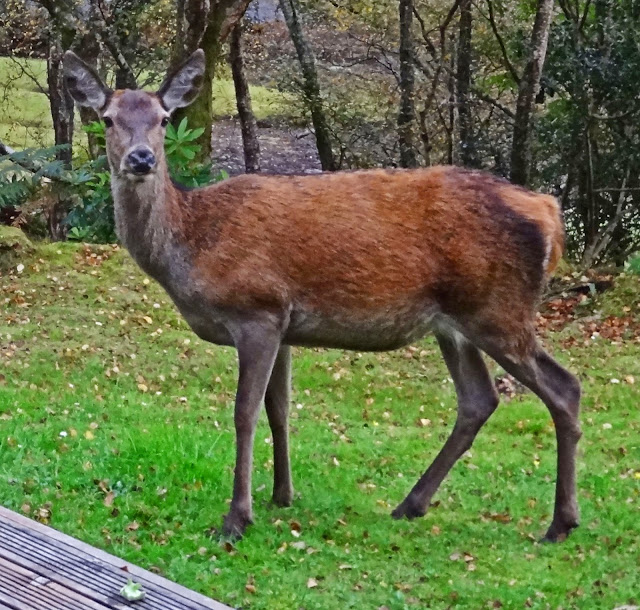 Whilst the red deer fawn was always wary, it eventually became possible to feed its mother out of the hand, with broccoli stalks seemingly being the favoured nibble – although carrots, peanuts, bread and almost any other sort of morsel seemed to be fair game too. The surprise of suddenly noticing the pair standing by the terrace never really faded. 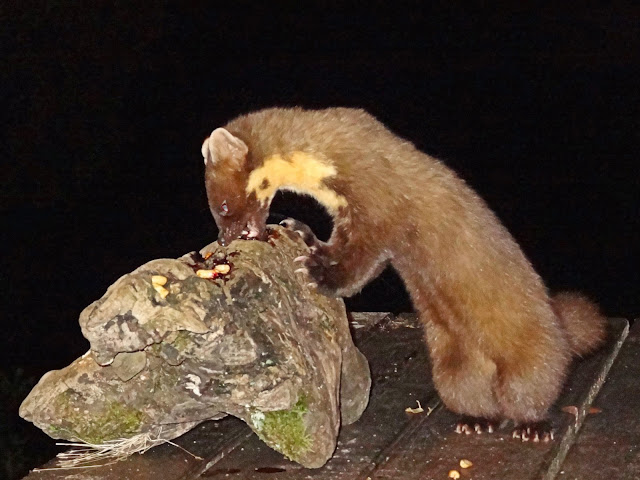 However, it was the pine marten which probably ended up captivating us the most – blackcurrant jam on a bit of log on the picnic table, outside light on, leave the French doors open, wait for darkness to fall, and it’s pine martens a go-go barely four feet away from where you are sitting. Who needs Autumnwatch?! How on Earth the things didn’t end up staggering away half-blinded by the volley of flash-bulbs going off we’ll never know.

Deeper into the night and the roaring of stags became the thing, sometimes sounding like they were very close-by indeed, and the ghostly outline of one strutting around near the cottage certainly grabbed the attention.

Many thanks indeed to Marc for this - part two to follow.
Posted by Jon at 16:07

Email ThisBlogThis!Share to TwitterShare to FacebookShare to Pinterest
Labels: holiday