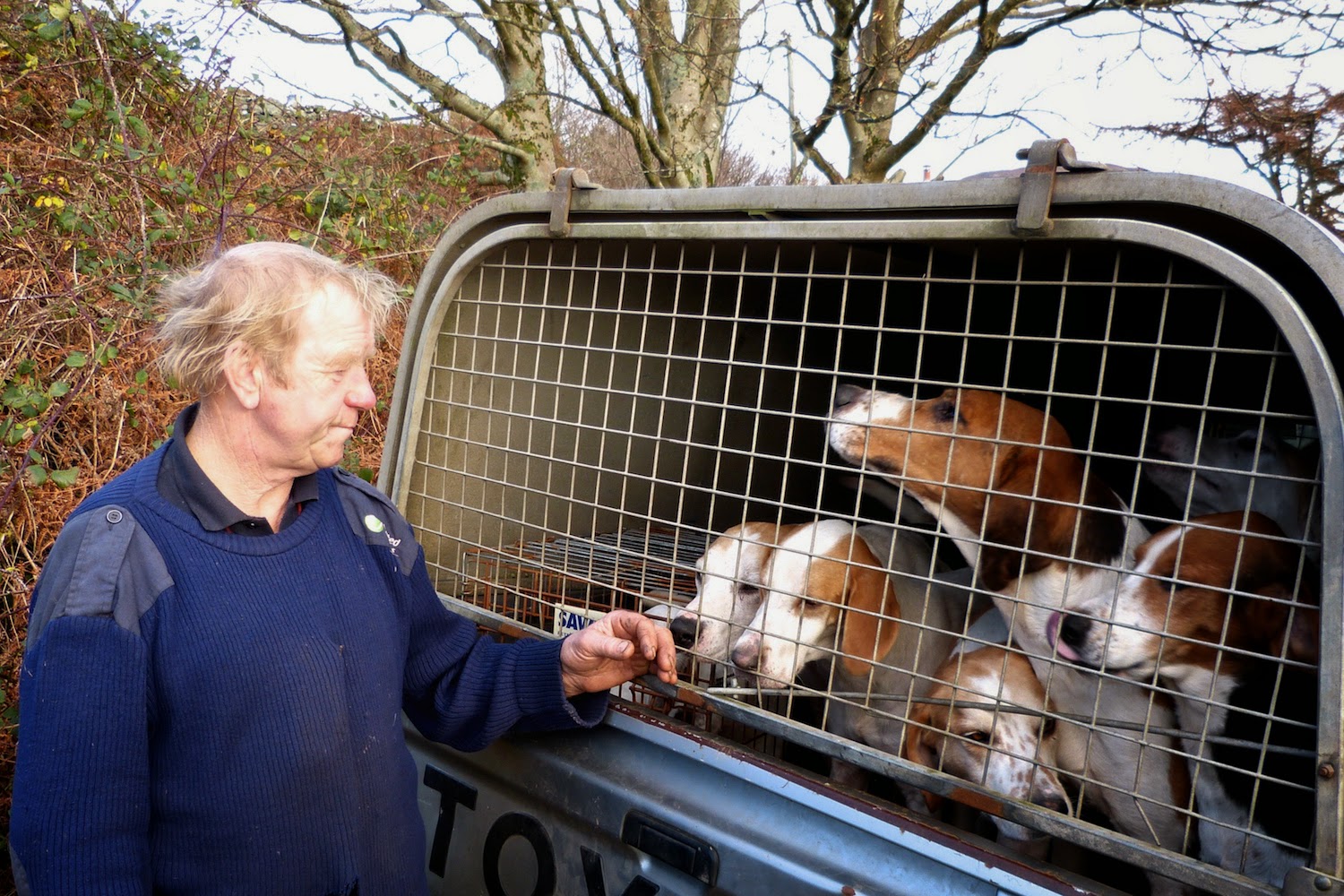 In response the need to remove the fox that has been doing so much damage to poultry in Ormsaigbeg, Roy Newton brought some of his hounds to the township this morning.  Fox hunting using dogs is legal in Scotland as long as the fox isn't caught by the hounds but shot.

These hounds are very similar to the English hounds but the best are lighter and slimmer - in the Highlands they need to be nimble and able to work a long day. 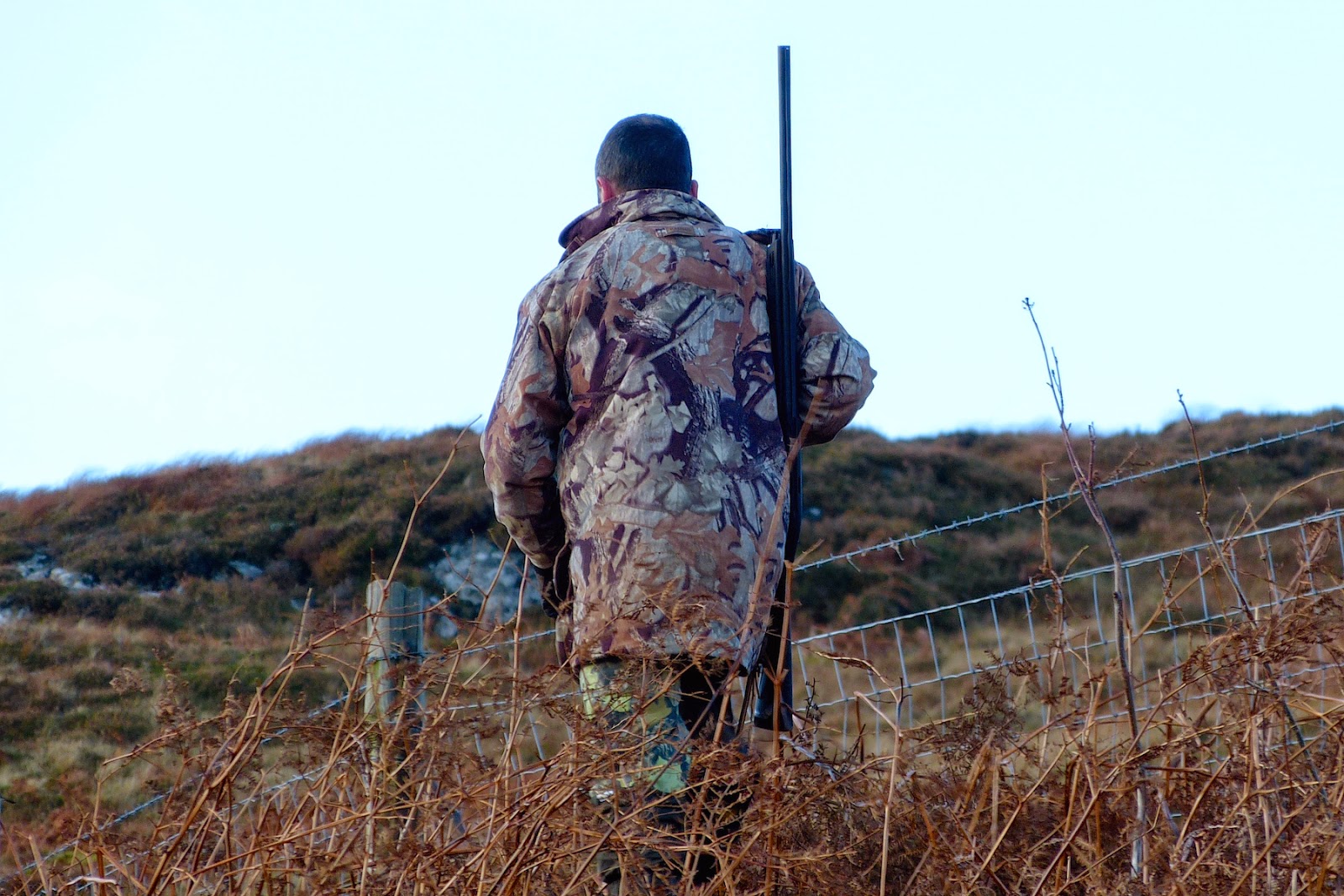 The Ormsaigbeg croft land runs along the coast and extends about half a kilometre inland, ending against the common grazings boundary fence; beyond is open moorland.  The plan was to take the hounds to the far end of the township and then drive the fox eastwards, with the guns strung out along the boundary fence.  Picture shows Alastair MacLachlan walking along the fence to take up position at the top of the woodland above Bill Green's house. 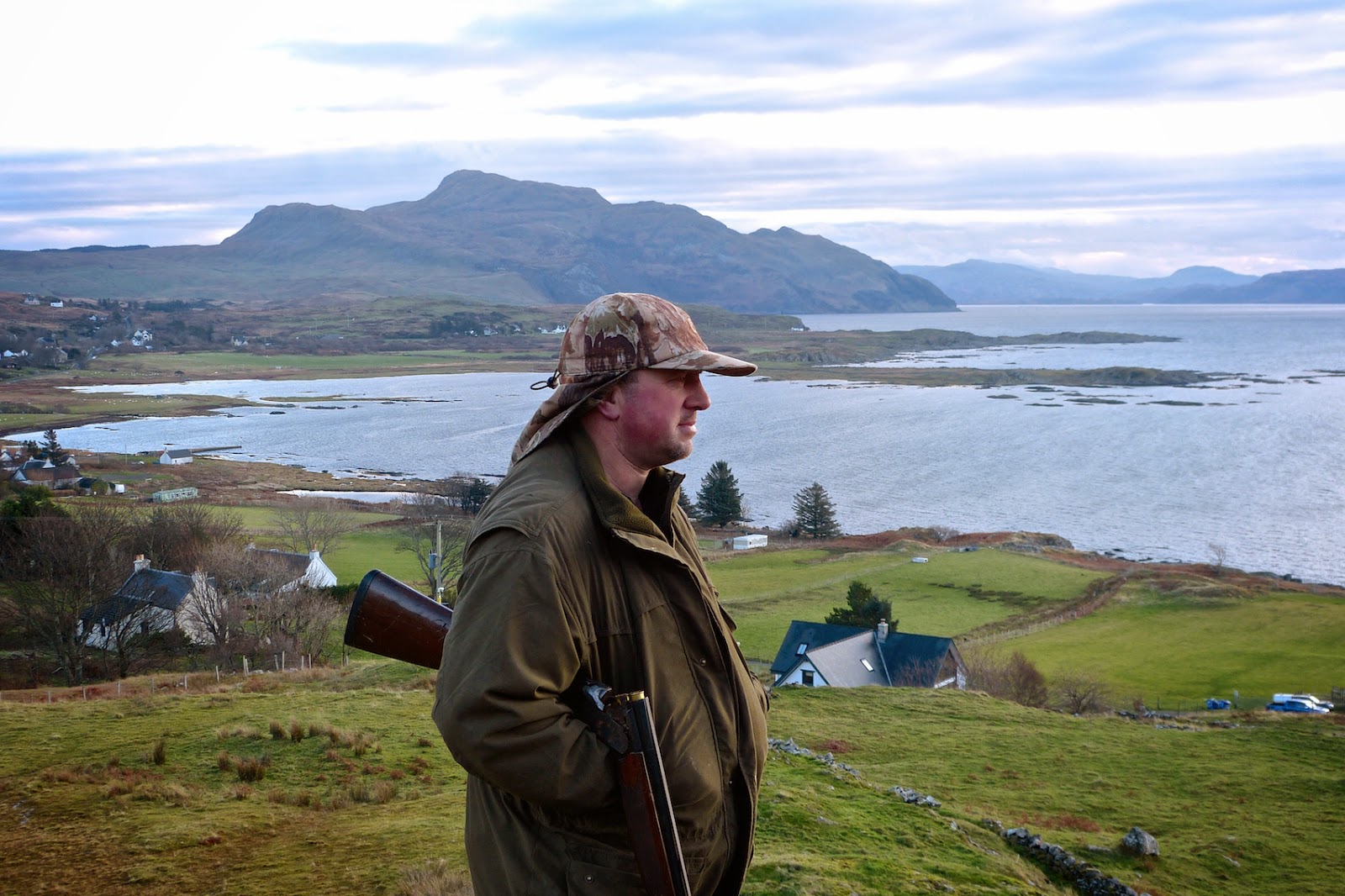 Once the guns were in position it was a matter of waiting for the hounds to start moving along the croft land.  The Diary had the pleasure of being with Hughie for the morning. 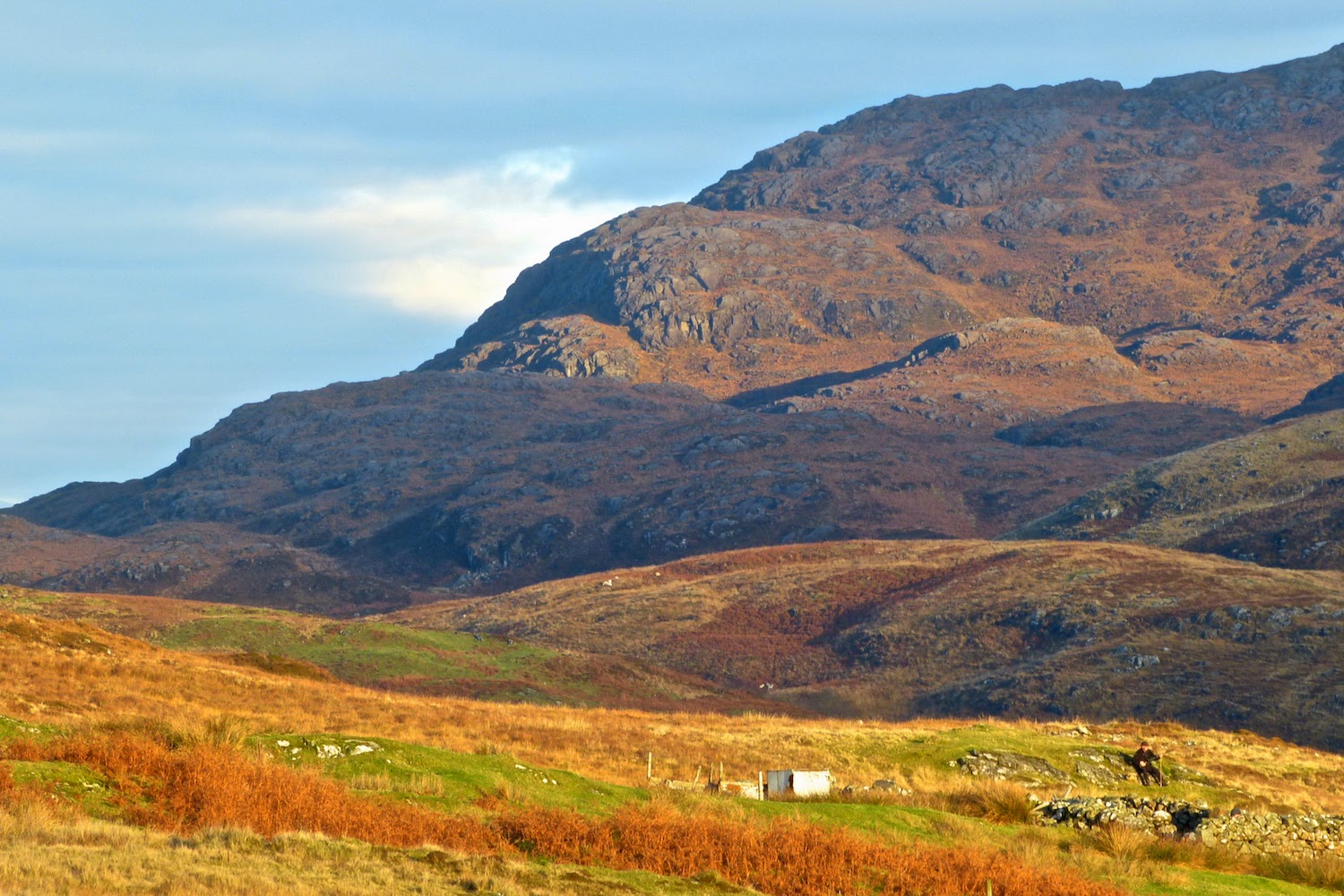 Picture shows the next gun in line from us, Tom Bryson, enjoying the early morning sun just along from the Ormsaigbeg fank. 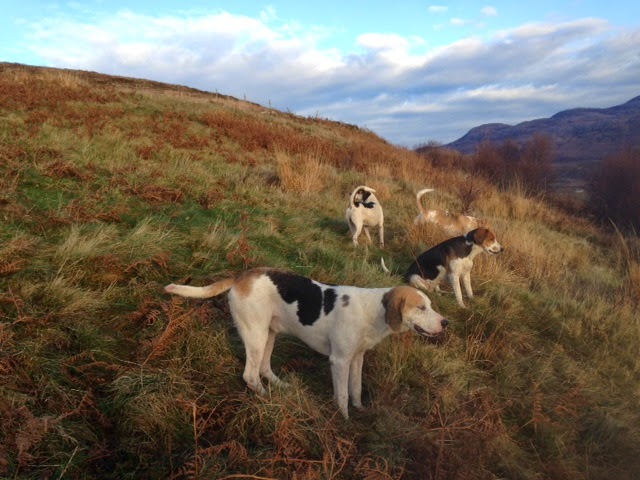 Once everyone was in position, the hounds were released and began to work their way towards us. 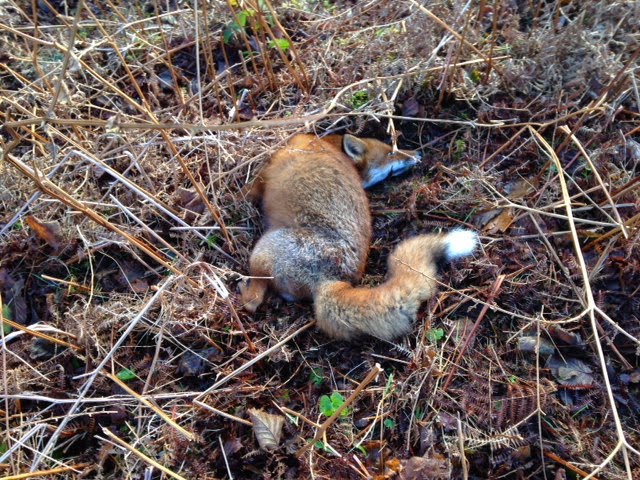 What followed was textbook stuff.  The hounds never saw the fox but he heard them and made a dash for the common grazings.  As he jumped across a wall he was shot at 15 metres range and died instantly. 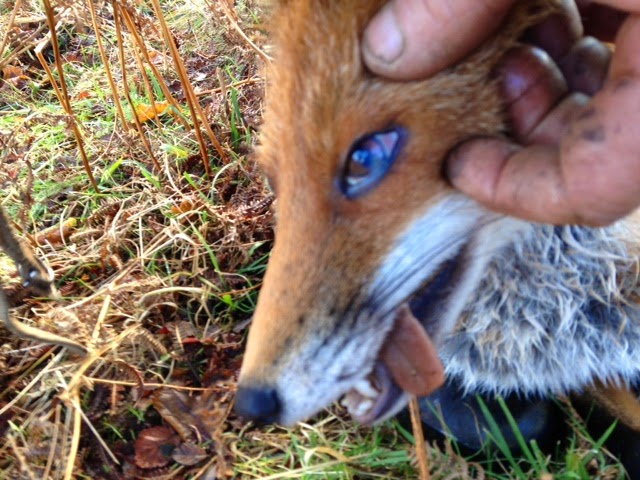 He was recognisably the right fox because, as had been noticed on the trail cam footage, he had a problem with his left eye, which was partly clouded over. 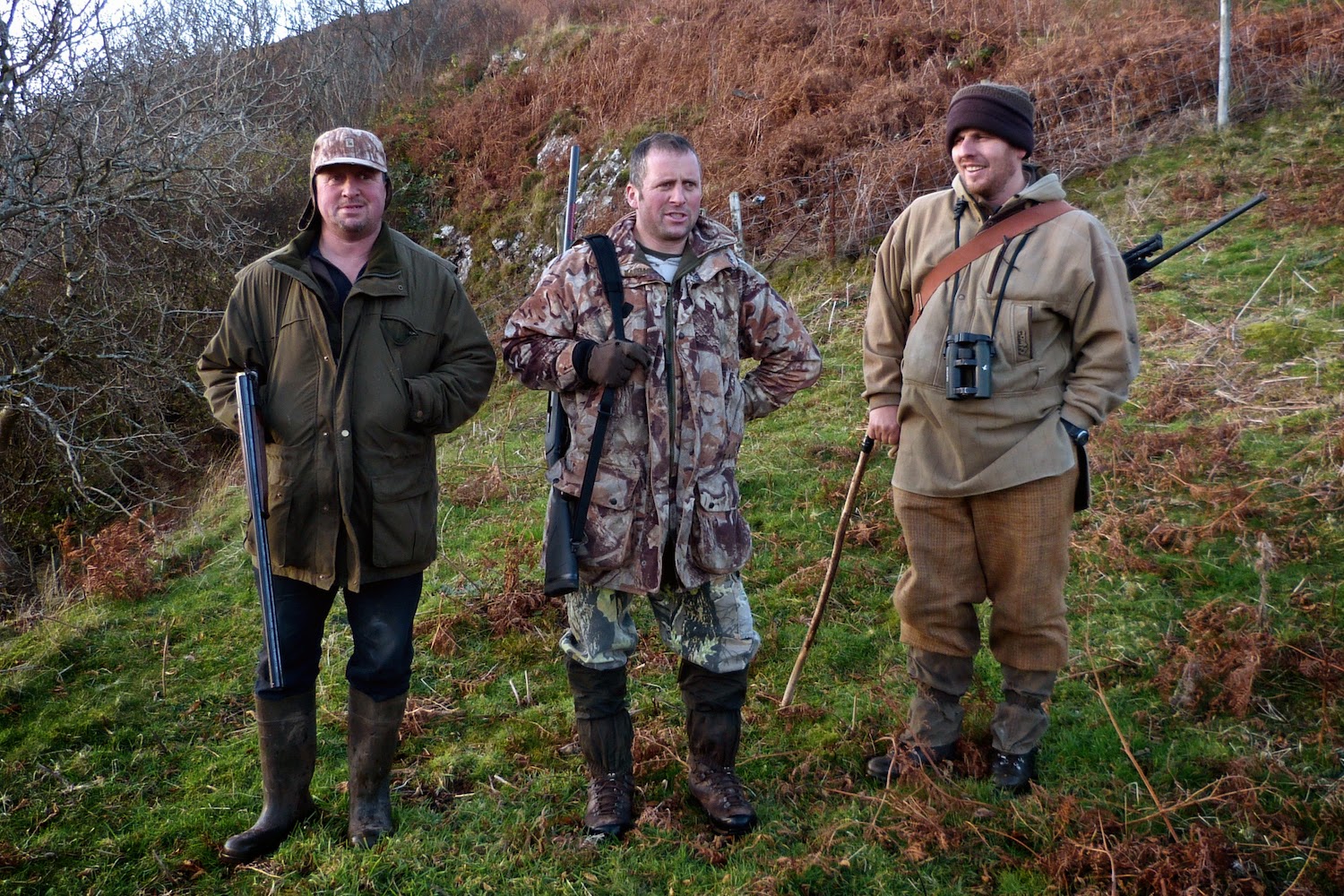 Living in a world today in which all wildlife is precious, it's difficult to watch a fine animal like this dog fox being killed.  There are, however, limits, and when farmers start losing their stock in broad daylight, and the attacker becomes more and more bold, a line has to be drawn.  What was so good about this hunt was that it was so clinical: from the time the vehicles were parked along Ormsaigbeg until the fox died was less than half an hour, and the fox was despatched with a single shot.  What the crofters don't know is whether this is the fox which recently killed the Kilchoan hogg.  Picture shows some of the guns, Hughie, left, Alastair and Archie.


Many thanks to Alastair for pictures of the fox.
Posted by Jon at 15:00