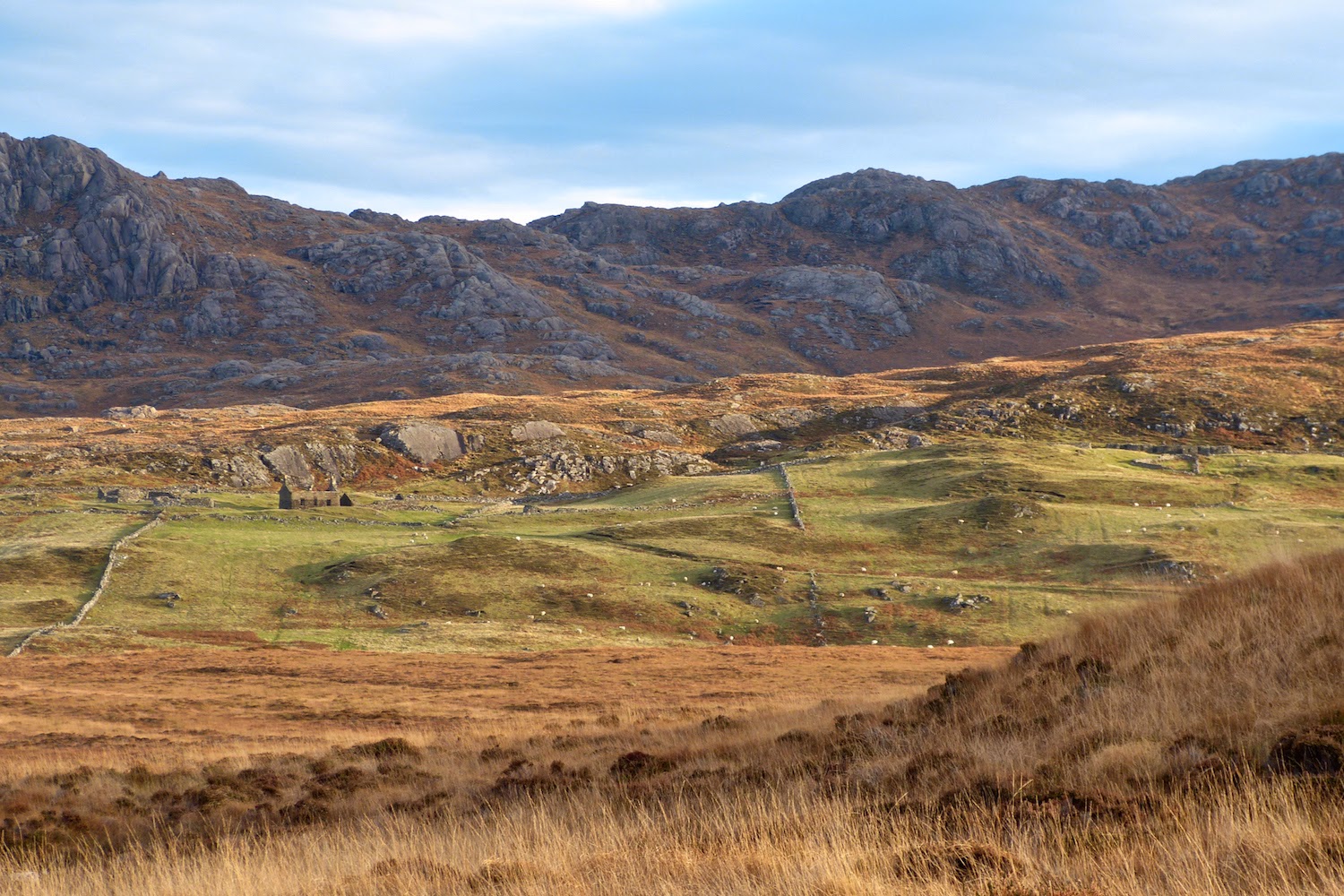 On one of last week's fine days I walked in the land to the west of the abandoned township of Glendrian - its roofless houses can be seen in the picture at the top of the crofts' grassy inbye land.  The settlement is a scheduled monument because, to quote Historic Scotland, it has "potential to contribute to our understanding of post-medieval settlement and economy".  The object of the walk, beyond just a pleasant wander, was to see if there were any archaeological remains away from the settlement, between it and the neighbouring township of Achnaha. 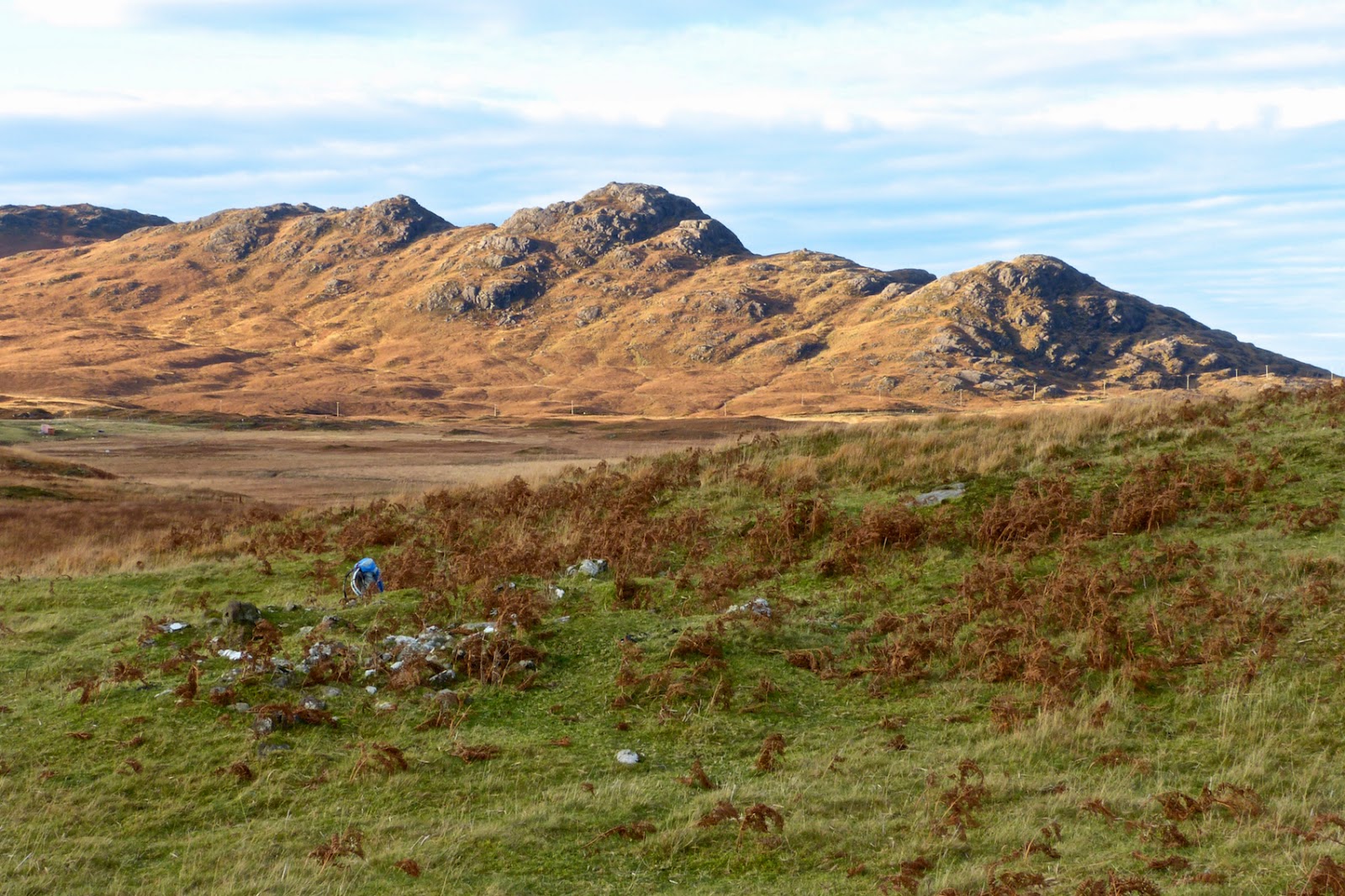 Much of the walking was hard work, through boggy land, thick heather and tufted grass, but at the northern end of the area the land rose into a low hill and the vegetation changed to well-cropped grasses.  On this rise lay what are almost certainly the remains of a small building - visible in front of the blue rucksack - some 5m x 4m, which could have been a byre, sheep pen or small dwelling.  It is badly degraded, the rocks of its walls scattered. 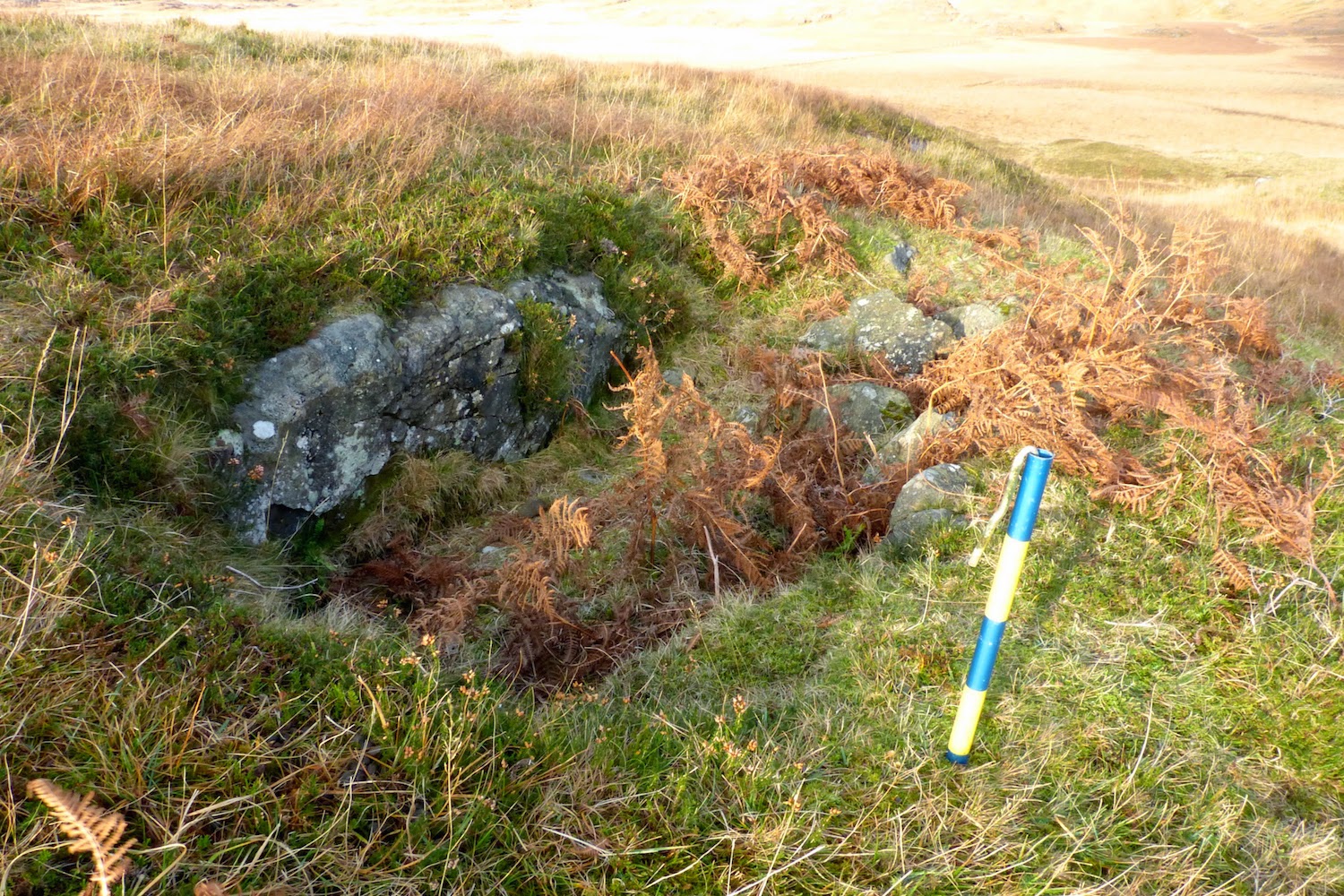 On the other side of the low hill some 50m distant, is this rectangular depression.  Measuring about 2m long by 1m wide (the stick is marked in 10cm divisions) and cut into the side of the hill, the rock on the left is in situ while the other three sides have been built up using local stone.  To the top right of this picture the land falls away to the flat land of Glendrian Moss. 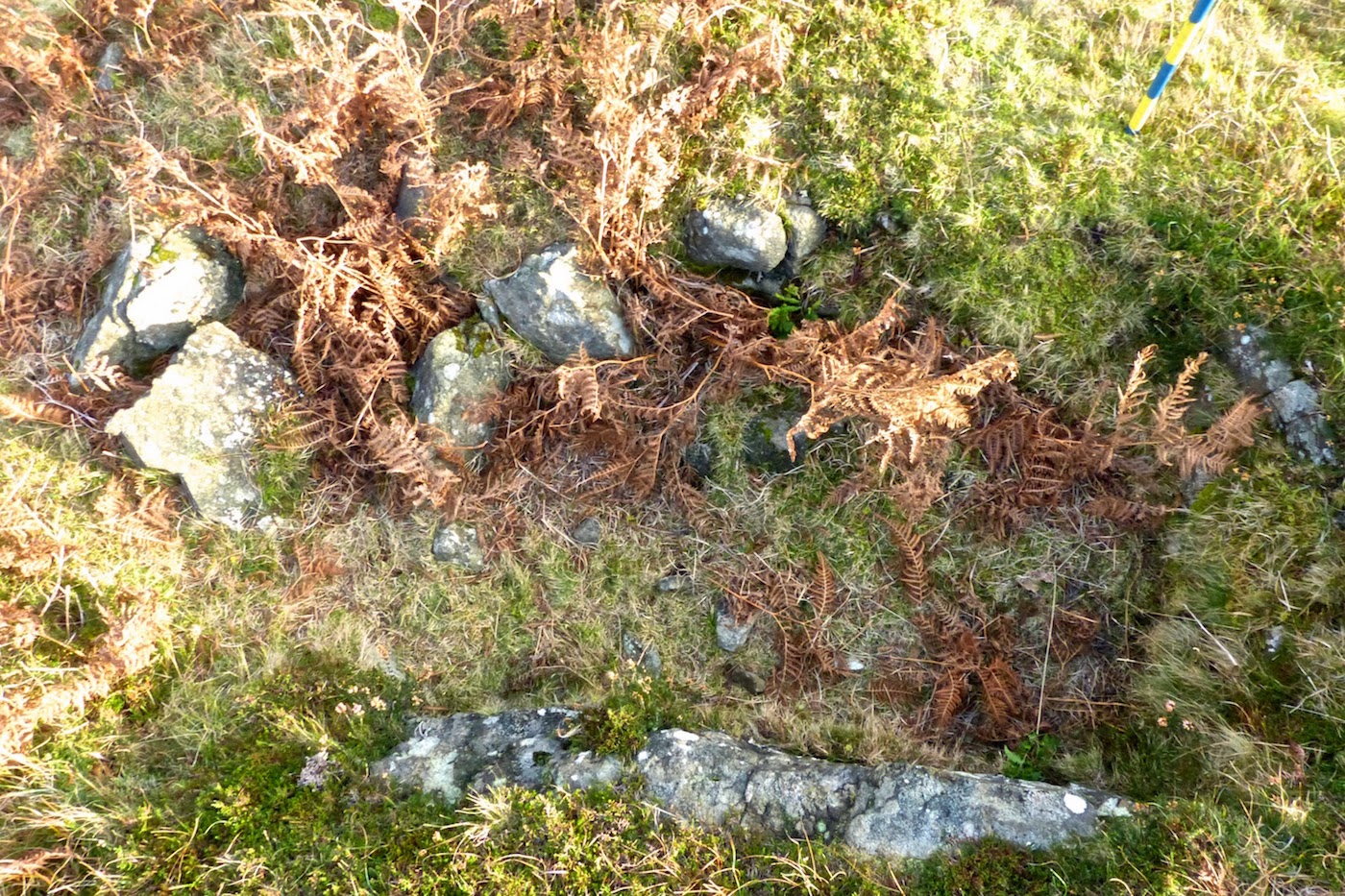 This picture was taken looking straight down into it.  The middle of the hole seems to have been part-filled with rocks, now largely covered by turf, and the stone-walled sides have to some extent fallen in.

I have no idea what it is, but it has the perfect dimensions for a grave. 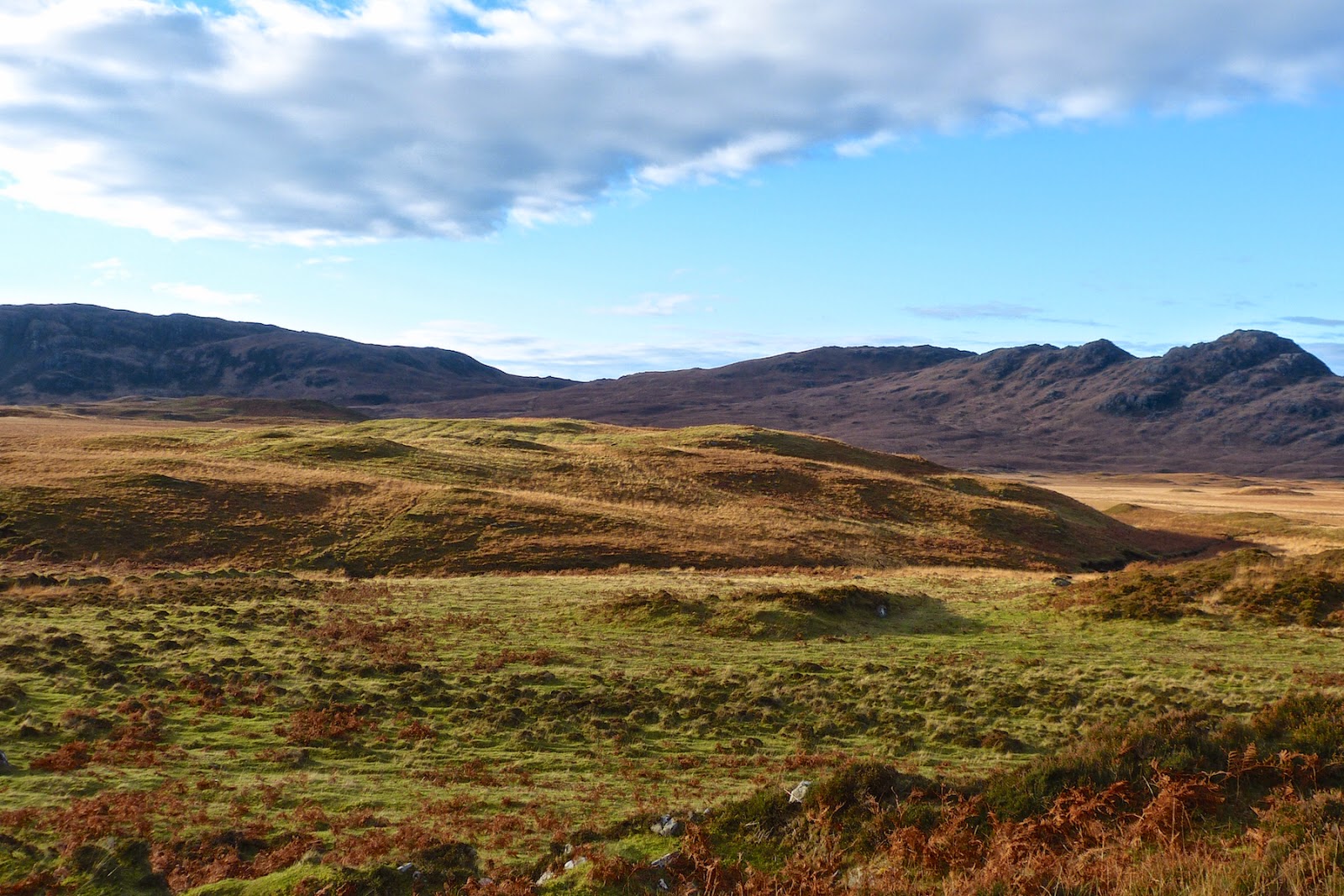 After leaving the hillock and heading towards Glendrian, I took this picture looking back towards it.  While they were visible while walking on the hill, the characteristic stripes of lazy beds are clearly visible in the low sunshine, covering almost all the raised, better-drained land.  These fields could have been part of the Glendrian clachan, worked by people living in the township, but they could also have been the land worked by the occupants of the building. 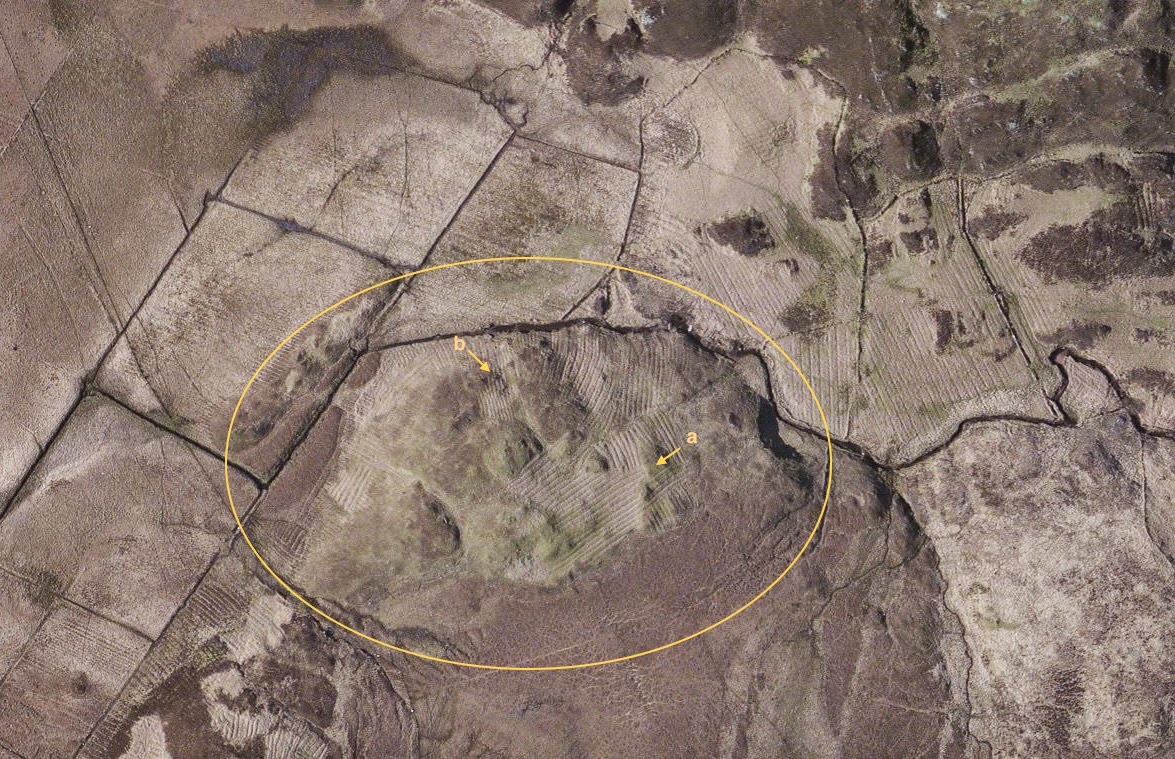 This clip from Bing Maps shows the site superbly.  The ellipse encloses the area of higher land, 'a' is the approximate position of the building, 'b' is the depression.  To the west lie the lands of Glendrian Moss, drained early in the 18th century, while the worked lands to the east, to the north of the burn, are those of Glendrian.