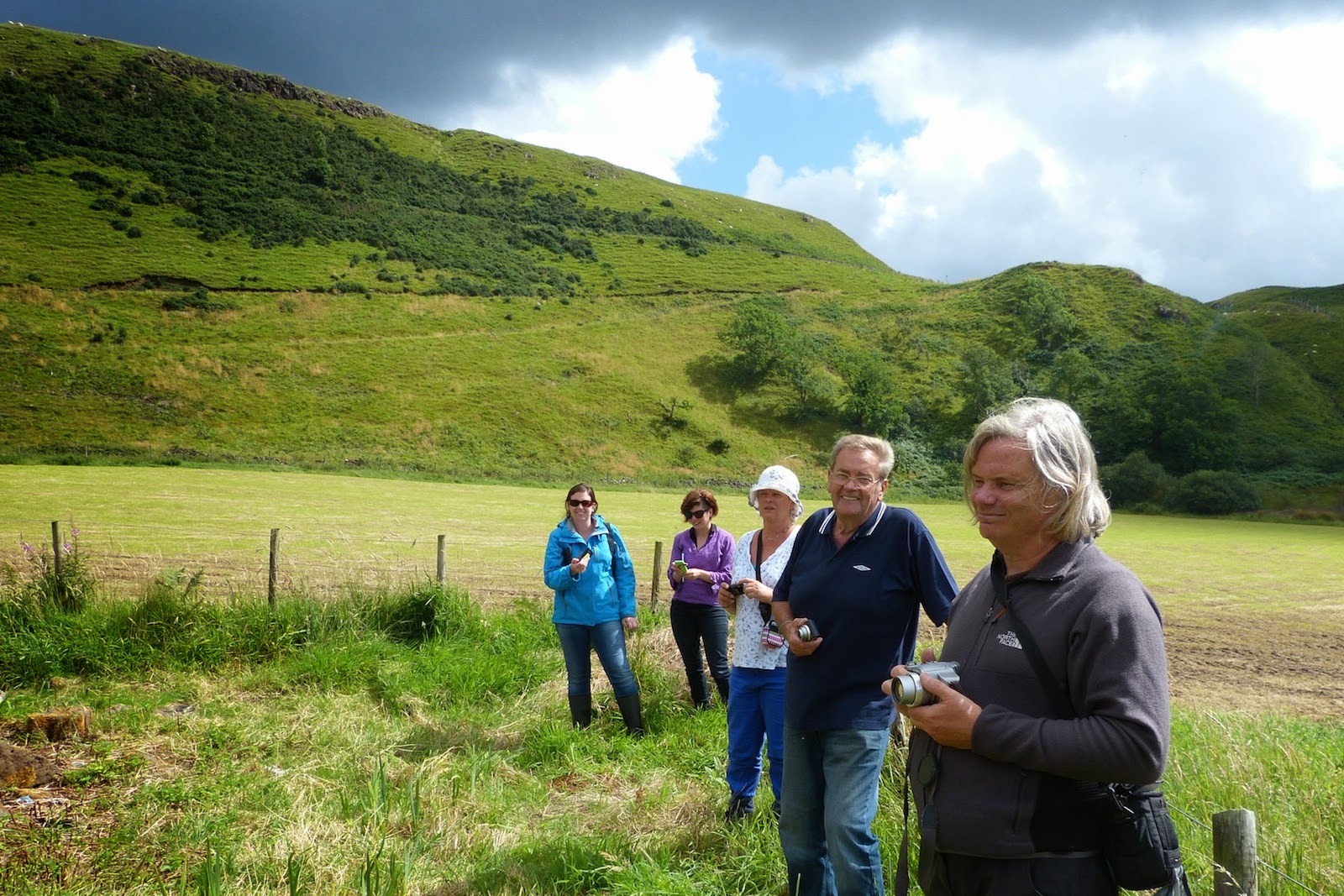 Members of Ardnamurchan Community Archaeology spent the weekend working with the ACCORD Project, which trains local groups in the digital recording of archaeological monuments. Organised by Archaeology Scotland's Project Manager Cara Jones (at left in picture), it involved two of ACCORD's officers, Dr Mhairi Maxwell (standing next to Cara) and Dr Stuart Jeffreys.

ACCORD were very keen that we should drive the training days, so we chose the graveyard at Camas nan Geall and St Comghan's churchyard in Kilchoan as containing monuments which we felt were of considerable significance but which were also in need of recording since they are exposed to continuous weathering. 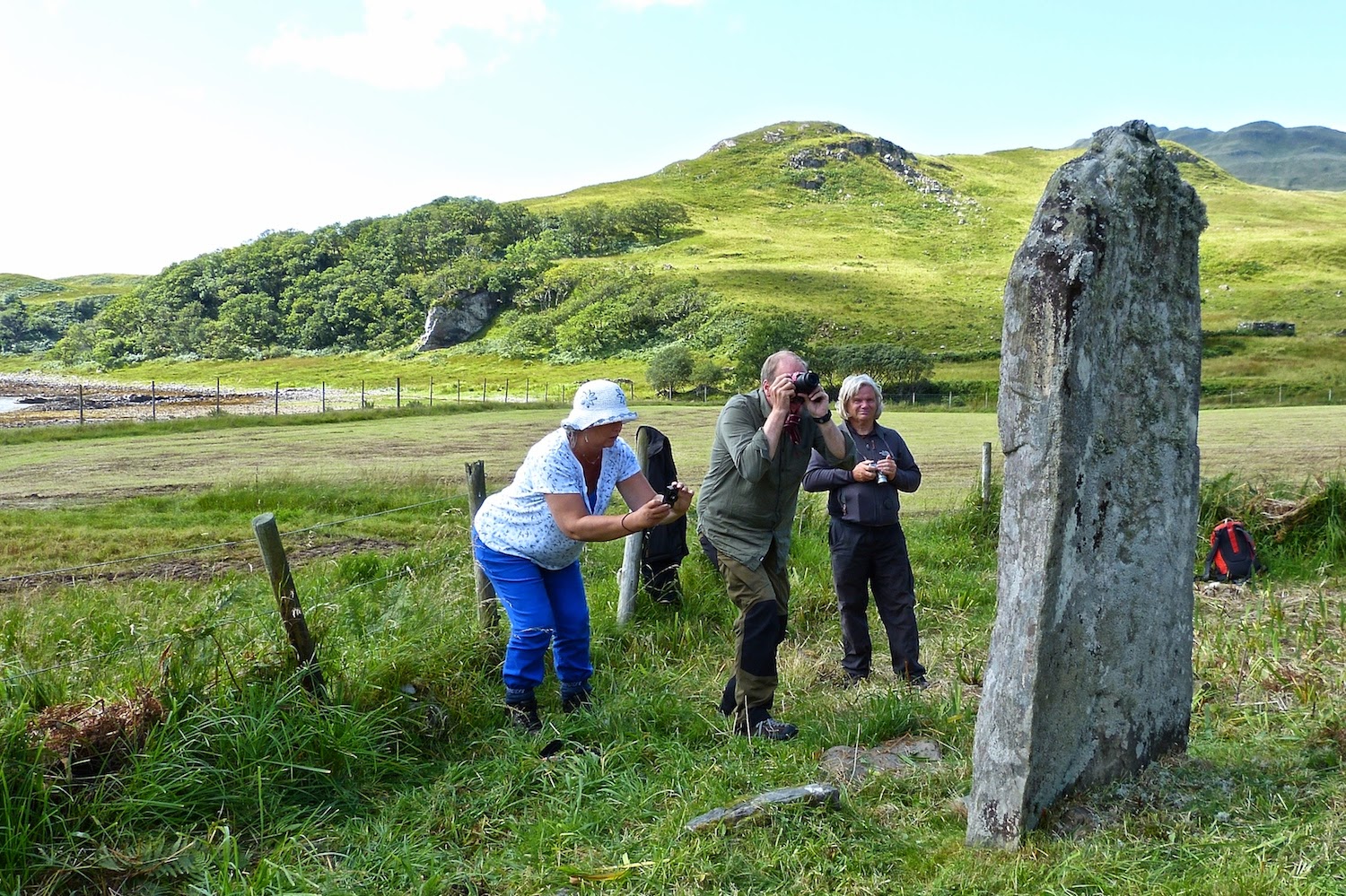 At Camas nan Geall we used the Bronze Age standing stone as a model for photogrammetry, which turns digital photographs into 3D digital models.  Since the process improves with the number of pictures taken, we took as many pictures as possible, guided by Stuart (centre), ACCORD's lead investigator. 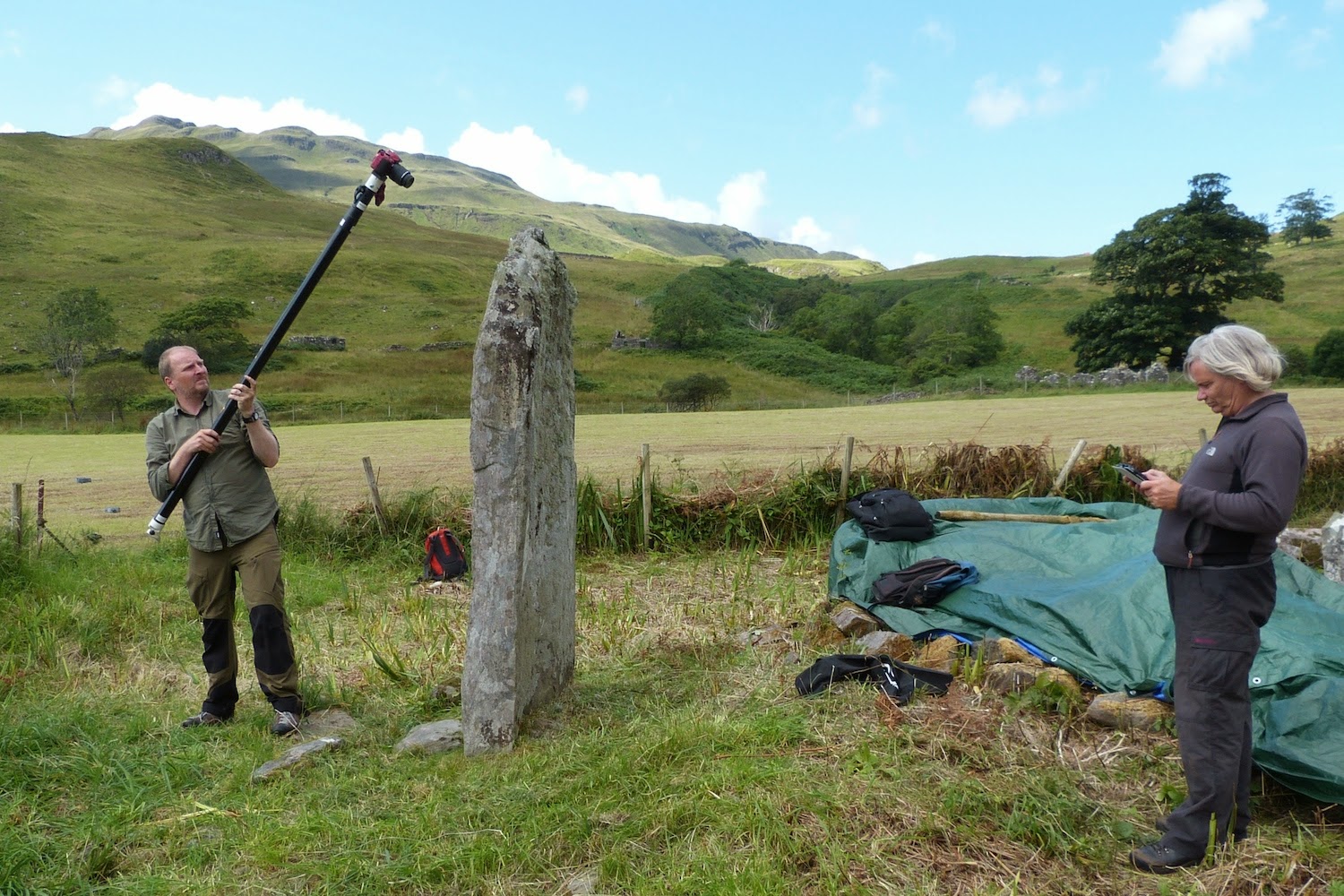 Taking pictures round the sides was easy enough, but to complete the model Stuart demonstrated a telescopic holder which, using a camera which is controlled by wi-fi, enabled us to take pictures of the top of the stone.  Andrew Perkins, right, is operating the camera from a tablet. 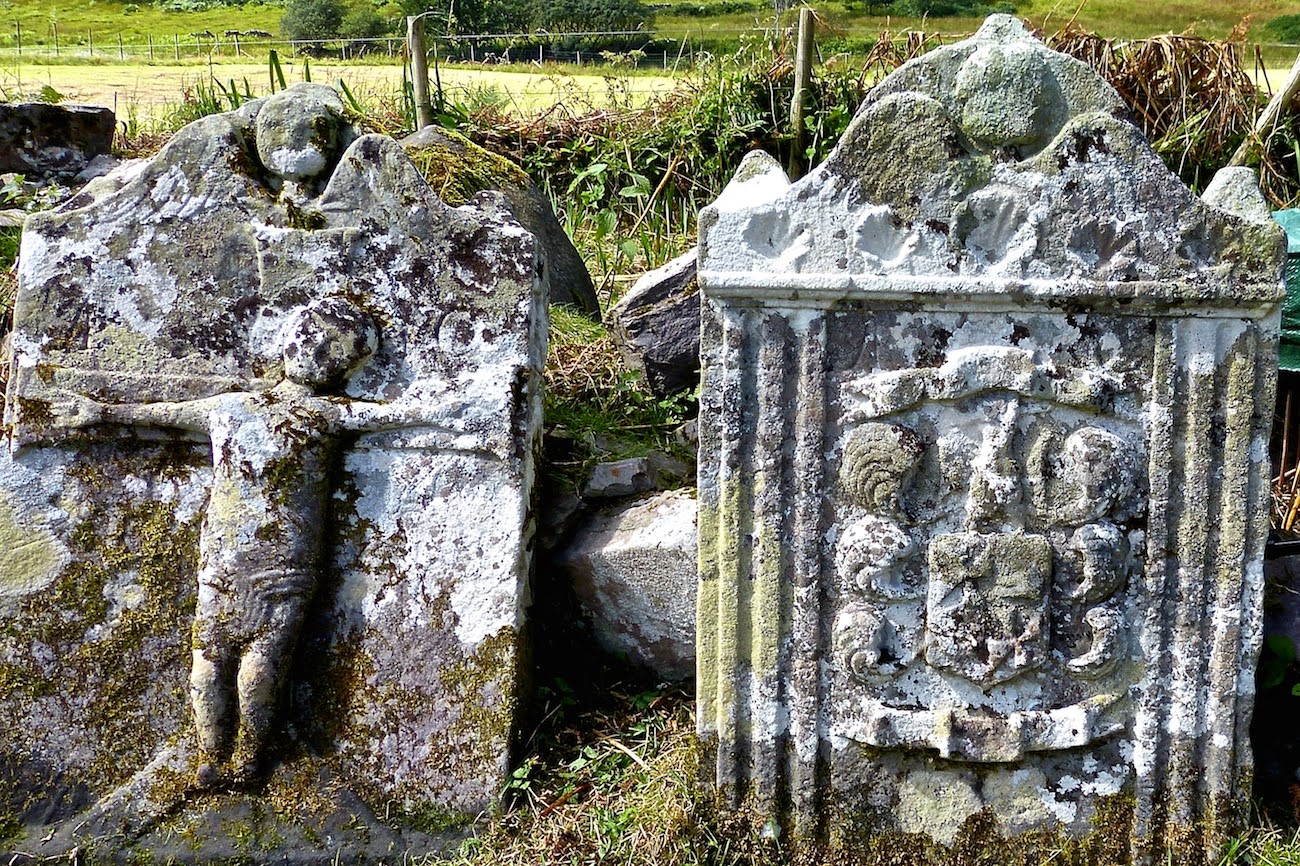 With the graveyard recently cleared by ACA members, it was an ideal time to record the 18th century gravestones.  To do this, we were taught a second technique, Reflectance Transformation Imaging, which is designed to bring up features which, to the eye and in on ordinary photographs, are lost.  This process is great fun in that.... 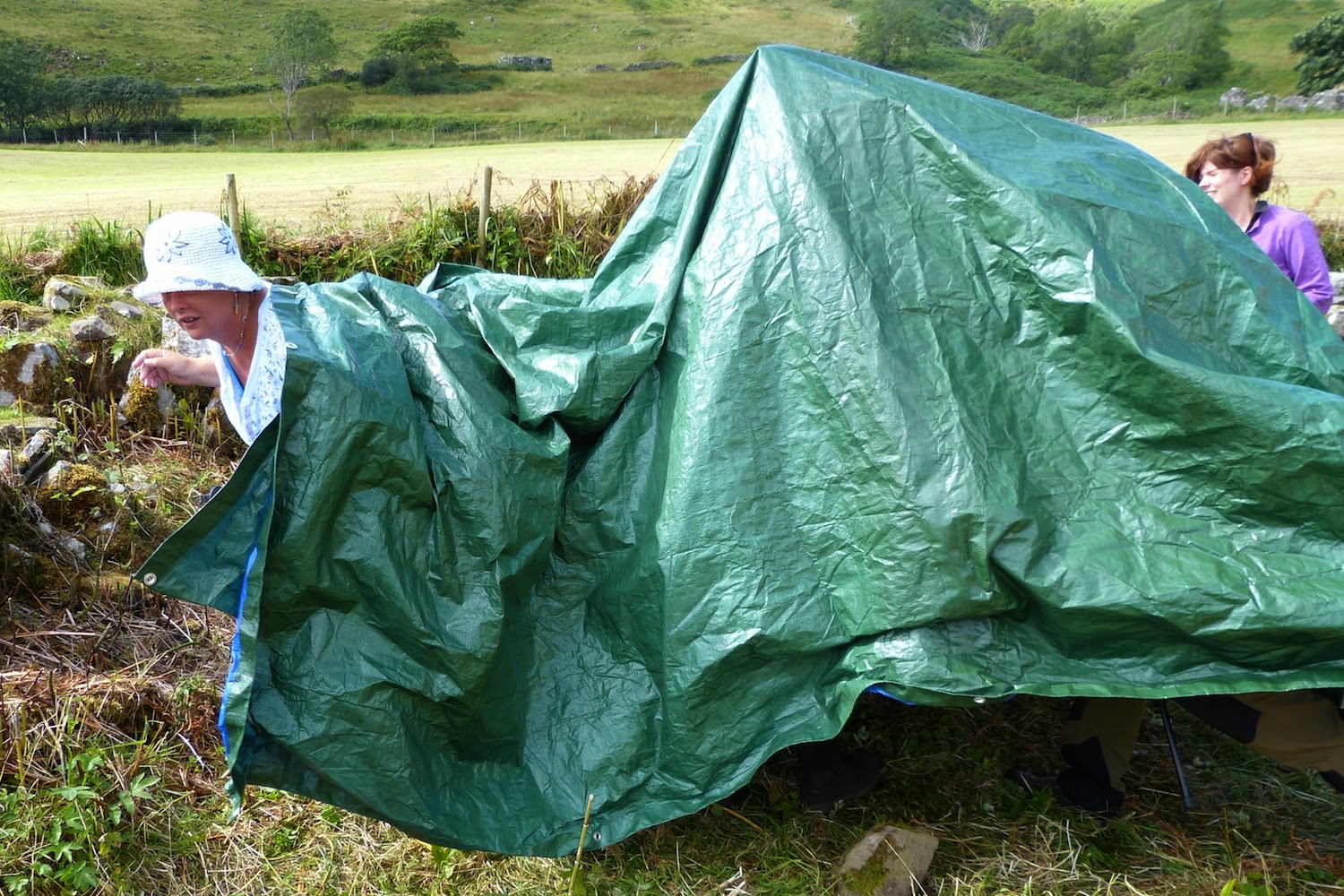 ....it has to be done in darkness so, to the amusement of passers-by, tarpaulins were carefully stretched across the stones and most of the group squeezed under them.  With a camera held securely on a tripod, and a torch which is angled low across the face of the stone and moved into several positions, twenty or so pictures were taken of each stone which, when processed by the software, brought out many hidden features. 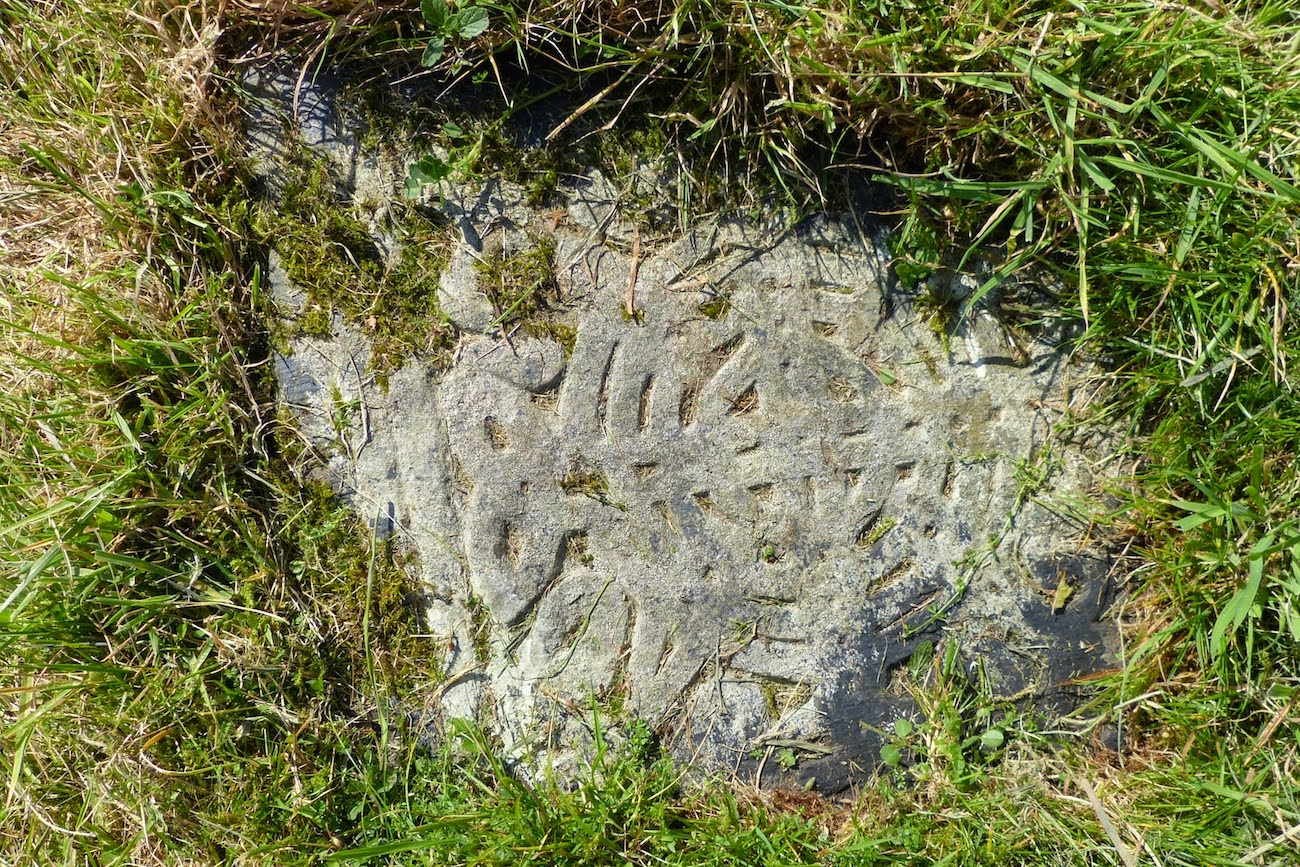 On Sunday we spent time in St Comghan's churchyard.  It contains a number of grave slabs which are dated to the 14th or 15th century and were probably brought here from Iona.  The stone in this picture is much smaller than the grave slabs but has an interesting design on it. 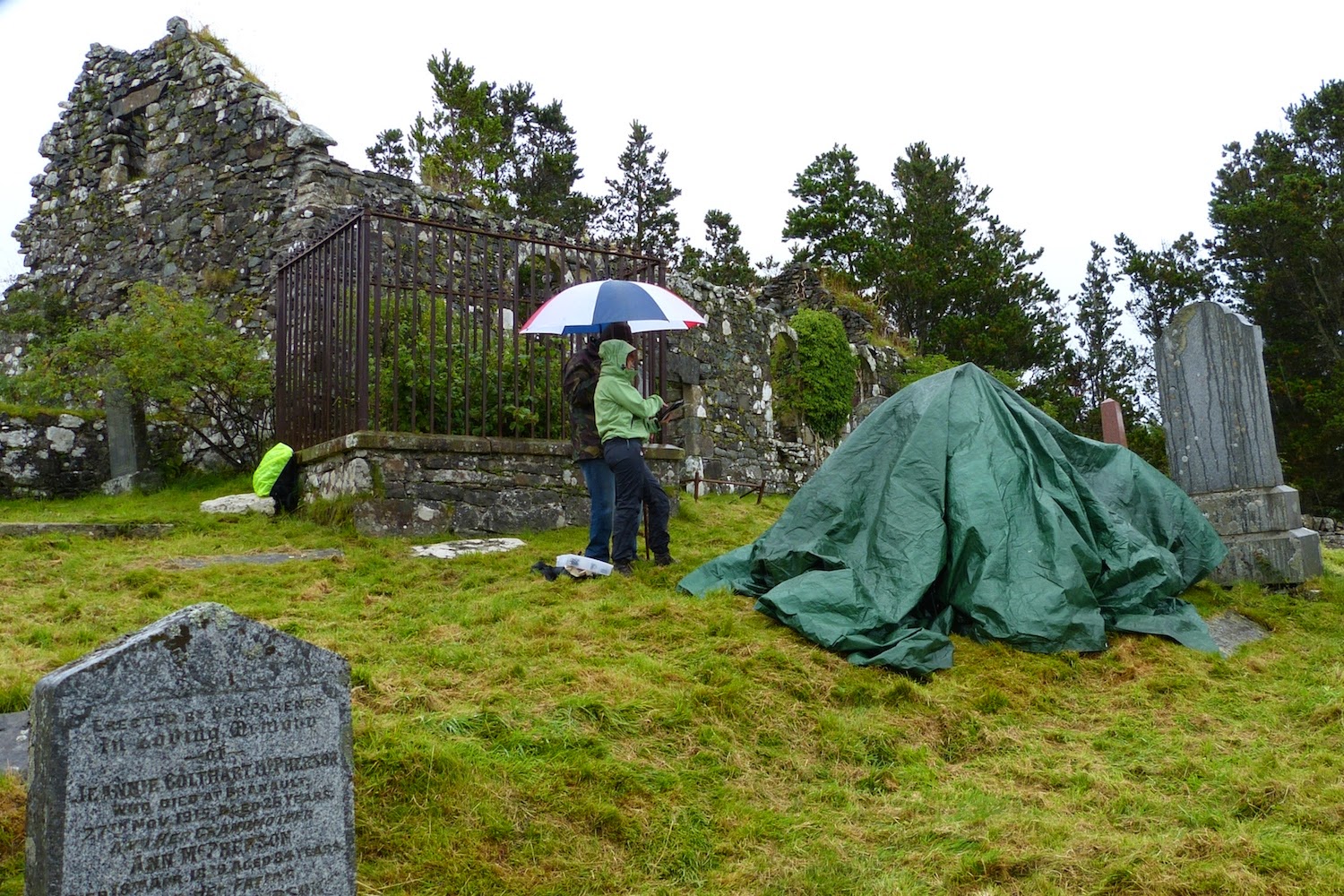 Sadly, Sunday saw some very heavy rain.  This we could cope with, particularly those under the tarpaulin (there are five under it!), but the midges were out in force and were no respecters of archaeological research, so the day's outside work was somewhat curtailed.

As part of the course, we had an initial, brief look at the pictures the software can produce, and the results were spectacular, but huge amount of data remain which ACA members are now beginning to process.  We hope to be able to publish this soon in the hope that these digital pictures will help to put Ardnamurchan even more firmly on the archaeological map, but we also hope that they will be enjoyed by those who are unable to visit the sites.


Many thanks to Cara, Mhairi and Stuart for a super weekend's course.
ACCORD's Facebook page is here, and their blog is here.
Posted by Jon at 14:28