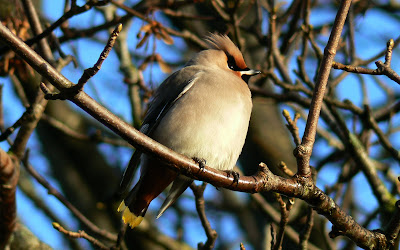 The Christmas bird was, of course, a waxwing (or spotvogel - see Comment on yesterday's entry), a winter visitor to the UK whose numbers have been swelled this year by a good breeding season followed by many days of northerly winds which have blown them down from their native Scandinavia. 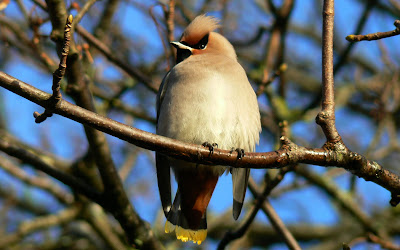 I'm told, by those who have been there, that they are as common as sparrows in Russia, flying round in large flocks to eat their favourite food, berries such as rowan, hawthorn and cotoneaster. They do this in Britain too, often being seen in supermarket or office car parks which have berried shrubs in their flowerbeds.
They've been seen before in Kilchoan, up near Mingary, but this was the first one the Diary has ever seen - hence its excitement. Unusually, our bird was alone. He appeared to have no fear of humans, allowing us to approach to within a few feet to take his photograph, for which he obligingly posed, offering first one view an then another of his magnificent plumage. 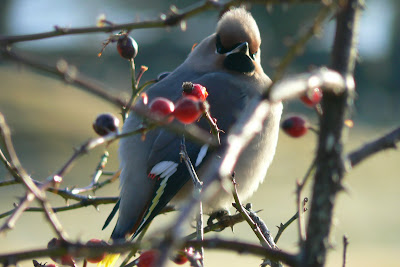 Their name comes from the small red feathers on their wings - visible in this picture - which resemble sealing wax.
Waxwings like apples, so please put cores into the trees where they can get to them. With a bit of patience, they can be persuaded to come onto a hand.
Posted by Jon at 11:22