Snow in the Hills 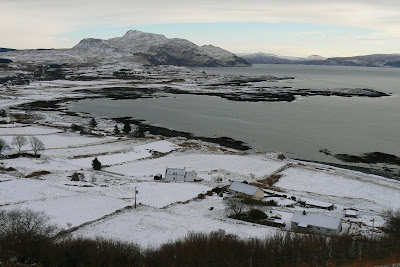 We set off this morning to walk northeastwards along the lower slopes of Druim na Gearr Leacainn and Tom na Moine, avoiding the steeper slopes because, although there's only an inch or so of snow, it has frozen and become very slippery. We stopped several times to look down on a monochrome village and the bay, and across towards Ben Hiant, all colour lost except in the sky. 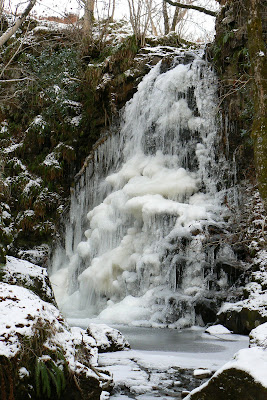 Our objective was the falls on the Millburn, just past the Sanna turn, and they proved well worth the hour's hard walking. The picture hardly does justice to the strange shapes the ice had formed. For anyone wanting to see them, the best approach is along the north bank, not from the Sanna road. 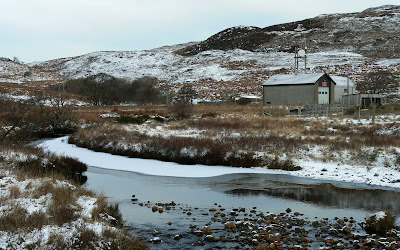 Most of the Millburn is free of ice except, as here, in the places where the water slows. In the mid-distance are the village fire station and telephone exchange. 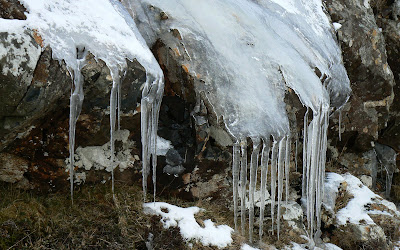 On the sides of the hills the surface water had long frozen, either forming great sheets across sloping rocks or strange patterns in icicles. Yet in one or two of the small valleys which are sheltered from the north wind, and exposed to the day's brief sunshine, there was no sign of ice, and the small streams ran free. 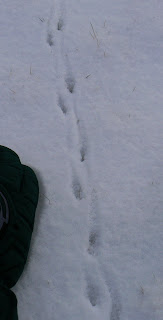 One of the pleasures of the walk was stopping to study the innumerable tracks which criss-crossed the snow. Some, like the ones here, remain mysteries, but others we identified as mice, birds, rabbits and, close along the banks of the Millburn, what was probably an otter. The mice tracks often followed runs which, like the London tube train, sometimes appeared in cuttings in the snow before plunging back underground. 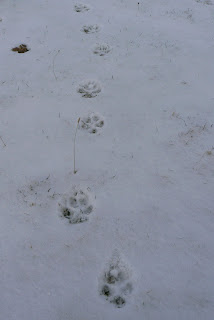 These tracks, however, were easily identifiable as made by a fox. They were everywhere from the slopes of Tom na Moine down to the Ormsaigbeg sheep fank, and then up the valley of the Millburn as far as the falls. Either there was one very active fox or there are several - and one of them is probably the beast which killed a Kilchoan ewe a week or so ago.
Posted by Jon at 15:18