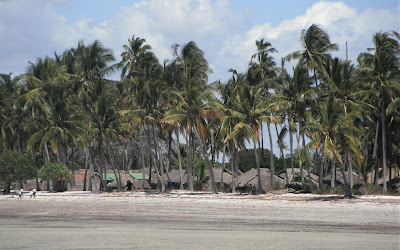 This is a village five thousand miles away from here. In many ways, it doesn't matter where it is, because village life is so similar wherever one goes in the world. This village, like ours, is remote, at the end of a single-track road, with a population of some 200+ whose houses are strung out along a wide, sand-fringed bay. 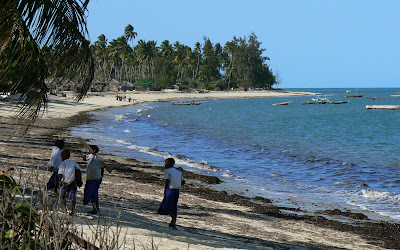 It has its church, a mosque, a school to which these children walk every morning along a beach which acts as the main road, a bar/restaurant (which doesn't serve alcohol), a meeting hall, a couple of shops, and a community council which runs its affairs. 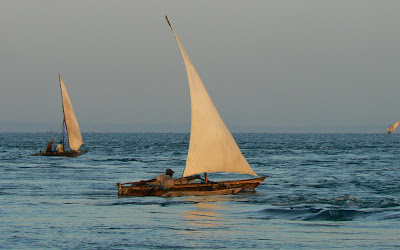 While it's a farming community, growing maize, vegetables, fruits and nuts, and keeping cattle and goats, its main income is from fishing and, like our local fishermen, the men set out every morning and return late afternoon. One difference is that their boats, as ours were many years ago, are locally hand-made, using materials from the trees which surround the village - mango, mahogany, bamboo and sisal. They're fast, maneuverable, and very elegant, and they're called ngalowas. 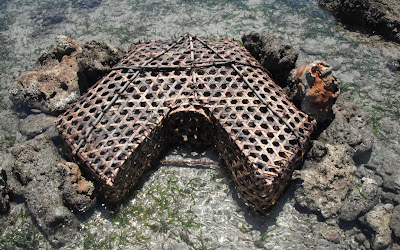 Some of the fishermen are creel-fishermen, the creels woven from coconut leaves and laid from an ngalowa along the many reefs that fringe this coastline. These creels are designed to catch fish, such as snapper, and the occasional lobster. 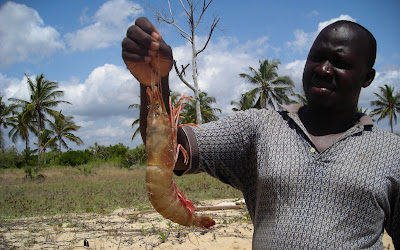 As it is here in Kilchoan, the most valuable catch is prawns - except their prawns make ours look like tiddlers. Some are caught direct from the beach by men wading out with a long net, encircling an area of water, and then drawing the net to shore. Others are caught in a similar way from a large ngalowa, the men swimming with the net to position it round shoals of prawns. Either way, prawns are good money, most being sold to the local hotels to be served as 'jumbo prawns'.
Tourism is becoming a major source of employment but most tourists only meet the locals when they serve at table or keep the bar. This particular village made a point of inviting tourists to visit it, though, sadly, few seemed to take up the opportunity. How sad! Imagine our visitors not wanting to talk to us!
Posted by Jon at 10:27