We live, at the moment, in a world of changeable weather, with brilliantly clear night skies followed by spectacular sunrises and blue-sky days, alternating with sudden heavy showers of anything between rain, sleet, hail, slush and snow. Over the 24 hours until 8am this morning, we had 15mm of this precipitation, and over the last week the temperature has twice dropped to -5C. 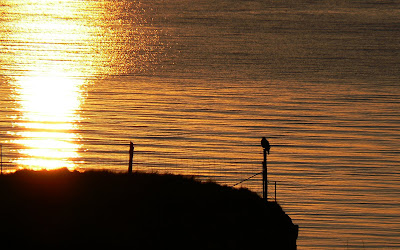 From a photographer's point of view this is like being let loose in paradise. The local wildlife probably feel very different about it. It's been a good breeding year for many - for example, this buzzard is one of a family which normally produces a single offspring, while this year they have two - and this sudden cold puts a heavy pressure on food supplies. It's particularly good that the Diary is getting reports of more wild cats on this end of Ardnamurchan than we've seen in several years. 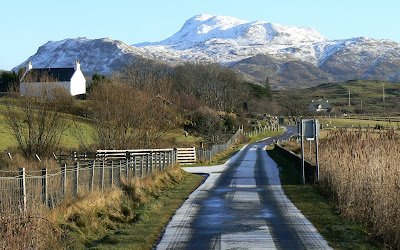 There's pressure on the human population too. The roads have been lethal at times - this picture shows the road near Ben Hiant croft, with the surface formed from a layer of rain, which froze, followed by a hailstorm which, in its turn, was covered in white frost. And, with the temperature hardly rising above zero all day, there's little thaw. One of the worst locations has been the Kilchoan-Sonachan-Portuairk road, where the Diary knows of three people who lost control on Saturday, one ending up in the ditch. 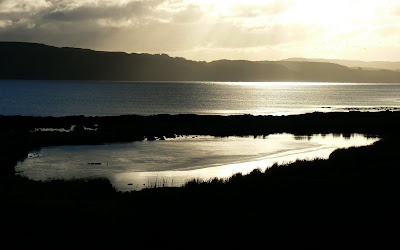 The Diary has always cited the stories from our older residents of how they used to skate each winter on Lochan na Nal, below the Ferry Stores, as firm local evidence of climate warming. This picture shows ice forming on the lochan, though not thick enough for anyone to skate on - yet.
Posted by Jon at 09:10