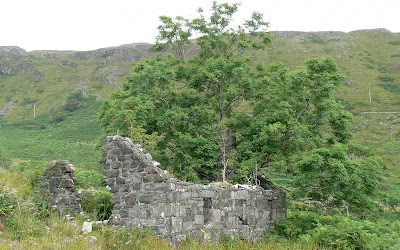 The best-preserved of the buildings at Camas nan Geall is this fine stone house. Other houses nearby had rounded corners and were much smaller and lower. This suggests that this house might have been the home of the Factor who oversaw the rearing of the sheep on behalf of the Estate, while the smaller were those of shepherds.
The house stands immediately to the north of the bay, on the hillside, with a wonderful view down to the beach and out across Loch Sunart. It measures roughly 12m by 7m, was built of walls two foot thick, had a slate roof, and was, surprisingly, single-roomed, though the interior may have been divided by wooden partitions. 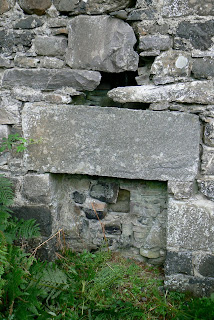 The chimney at the west end has collapsed, but that at the east end has this neat fireplace topped with a carefully-dressed stone lintel. The stone walls can clearly be seen to have been mortared, and the roof was made of slate. This would have been a warm and comfortable home.
It is difficult to date the building, but it was probably built in the mid- to late-19th century, after most of the bay's inhabitants had been removed and the area put down to sheep. 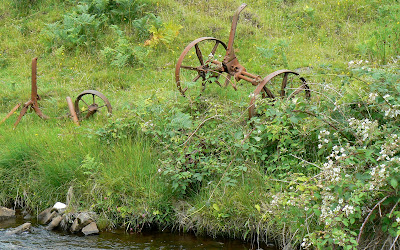 Just across the stream which runs in front of the house are these old agricultural machines that once worked the fields. Today the land is still owned by Ardnamurchan Estate. Cattle, sheep and red deer graze the rougher land, while the better land in front of the shore is used each year for making silage.
This is the last in this series about beautiful Camas nan Geall.
The previous post in this series is here.
Posted by Jon at 17:10