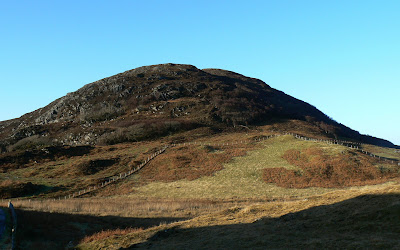 Beinn Bhuidhe - the name means the yellow hill - lies just to the west of the small crofting village of Achosnich. It's an easy climb as long as it's not approached from the direction we took, the south. The best approach is from the Portuairk road beyond Achosnich, near where the OS map marks a 'sheepfold', skirting the woodland and coming at the summit from the north. From the top there's a fine view westwards. In the foreground of this picture is the beautiful farm called Grigadale, with its green fields and flocks of contented sheep. Beyond is the Point of Ardnamurchan, with the Lighthouse and its new wind turbine. 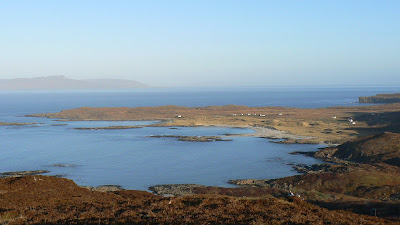 The view to the north is across Sanna Bay to the Island of Eigg and Skye's Cuillin Hills. In the right distance is the high cliffs of Carraig (or Carrach), the Cat's Face. With the sun low, the dunes behind the beach at Sanna are clearly visible. Formed of shell particles blown in from the beaches by the steady westerlies, it's even possible to pick out the barchan shape which is typical of dunes in the great sand seas found in Arabia and the Sahara.
We took this walk in mid-December, just before the snow arrived. Walking conditions were ideal, with the ground firm underfoot and the stands of bracken, which so often hinder progress and obscure interesting features such as old stone walls, long dead. And the weather...? Beautiful!
A map of the area is here.
Posted by Jon at 16:17