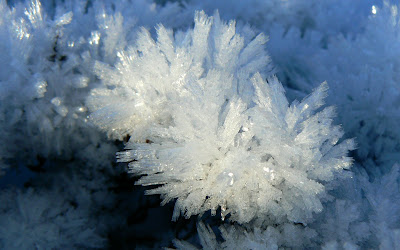 With night-time temperatures continuing to drop below -5C, hoar frost is forming - in this case, growing centimetre-long crystals around a sprig of heather.
These pictures were taken yesterday on a walk along the small burn that runs down the valley between the west end of the ridge of Druim na Gearr Leacainn and Maol Buidhe, coming out onto the beach just to the west of Trevor Potts' campsite at Bogha Caol Ard. 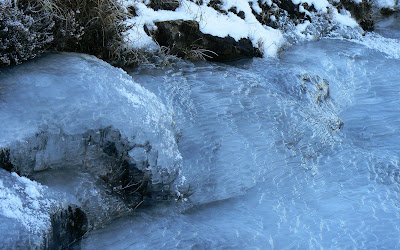 In the picture above, water has run down an inclined rock face on the side of the burn, freezing to form features which remind the Diary of some of the blue-white forms of the beautiful silica mineral chalcedony.
Near here, the surface of the stream had frozen solid for some metres, the water running fast beneath it carrying bubbles of air which gurgled and sang a strange, plumbic tune as they were dragged downwards. 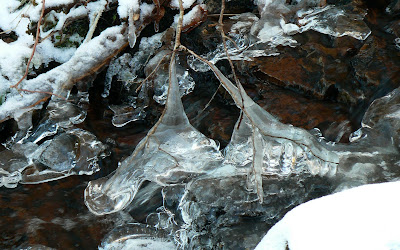 Where bushes have dipped their twigs into the stream, ice seems to have grown up along the wood. 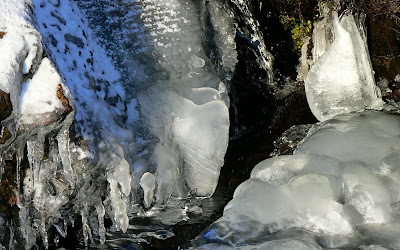 The most spectacular formations were to be found where small waterfalls splashed water onto surrounding objects, where it froze into fantastic shapes.... 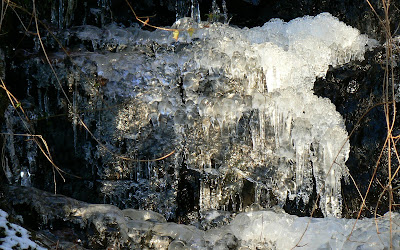 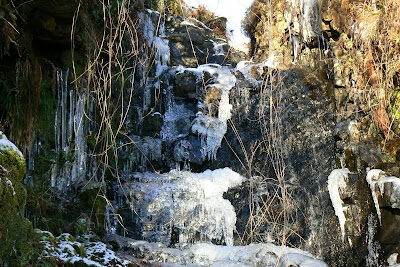 This, one of the larger waterfalls close to the beach, had icicles three or four foot long hanging in the shadows.
Posted by Jon at 09:42