Bleak Weather on the Croftlands 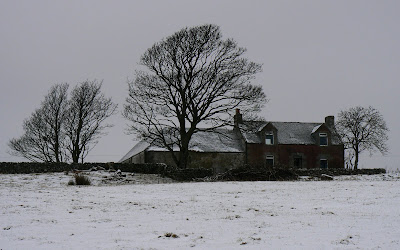 This is Grianan, a good-looking stone house on a large croft in Ormsaigmore. Although we've not had any more snow, what's on the ground refuses to shift, even in the occasional sunshine, and the ground beneath it is frozen solid. Just before this picture was taken two curlews rose from the field: they must be having a hard time as, in these conditions, their long bills can't be much use in probing the ground for food. 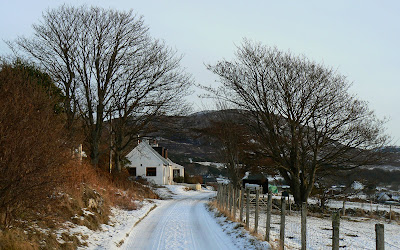 Despite sub-zero temperatures even at midday, the main roads are in fairly good condition as John MacFaddyen has been working overtime spreading grit, but along those he hasn't done, like this section in front of Craigard in Ormsaigbeg, the snow has been packed hard by the traffic into ice-roads the likes of which the Diary hasn't seen since a holiday in Lapland last January - the difference being that the Finns fit incredibly efficient studded tyres at the beginning of winter. 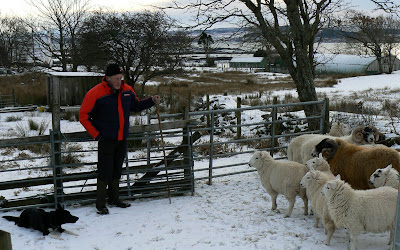 The crofters have been working hard looking after their sheep. When we passed this croft the hogs were being gathered in, along with a couple of the tups which had finished their business in the fields. 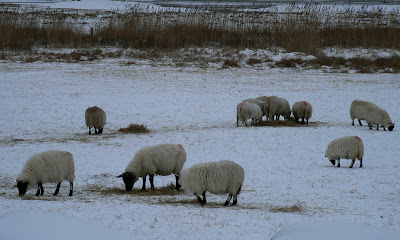 The sheep are getting nothing from the fields so this is an expensive time in hay, silage and the beet nuts which came in less then a month ago. This isn't at all the sort of weather this area is used to. We haven't seen anything like it in the 15 years we've been here, and there are people who have been here much longer who say the same.
Posted by Jon at 15:16