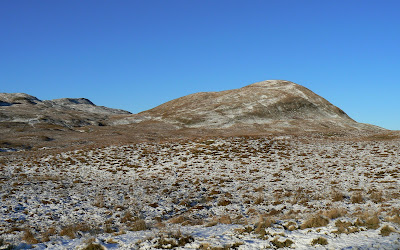 The Diary drove to Kilmory this morning, a journey of about 20 minutes normally - which took twice as long because of the need to stop frequently to enjoy the magnificent scenery. With the temperatures last night down to -3C in Ormsaigbeg and much lower inland, there's still snow across the hills - this is Beinn an Leathaid on Ardnamurchan Estate land. 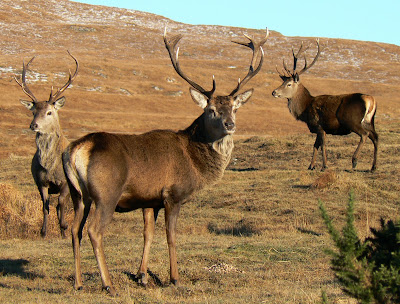 Near which Niall Rowantree, Ardnamurchan Estate's head stalker, had been feeding a group of stags by the road. Niall knows every beast and his history. One of the group was a magnificent, fifteen year old stag who should have been shot this autumn but had had the good sense to keep firmly to thick cover through the stalking season. There were also some fine youngsters, of 2 to 3 years, which will form the breeding stock on the Estate in years to come. More details of West Highland Hunting here. 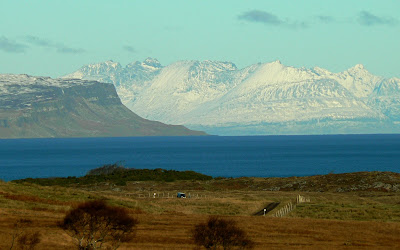 This was the view looking north down the valley of the Achateny Water, with Eigg in the nearer distance and the Black Cuillins of Skye forming the back-drop. One of the Ardnamurchan Estate staff was doing the rounds checking the sheep. 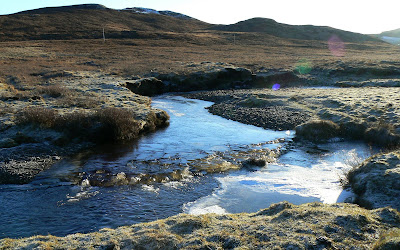 Ice had formed across the Achateny Water where the road crossed it near Branault. Although it was 11 in the morning and the sun had been out for some hours, a thick layer of rime still coated the grass. 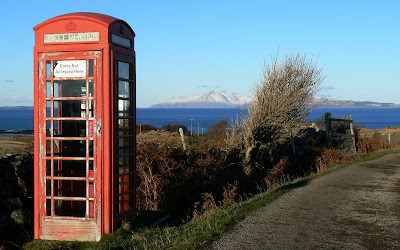 Just before Kilmory stands this sadly neglected British Telecom telephone box. Blasted by the winds, it's been hit by a lightening strike which put out Sky boxes and modems across this end of the peninsula. BT has tried to get rid of it, but local opposition has prevented this - there's no mobile signal here so it has a vital role. 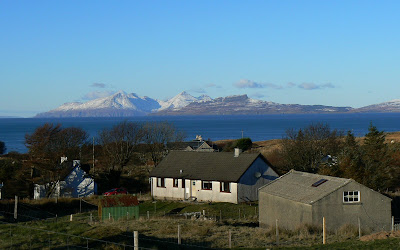 Kilmory is a gentle little crofting village with a year-round resident population of seven. The Diary was visiting to explore its history with some of the residents, a fascinating two hours which, we hope, will form the content of a future 'Exploring Ardnamurchan' booklet. In the picture, Rhum is visible to the left of, and behind Eigg.
Posted by Jon at 15:55