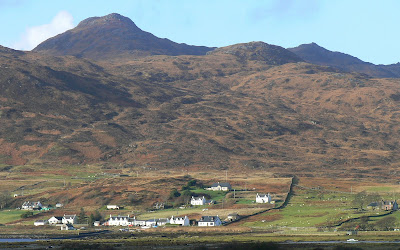 Behind the narrow strip of cultivated land that forms the worked croft land of the township of Ormsaigbeg, the land rises steeply to three peaks. At 344m the highest, on the left, is Beinn na Seilg, the hill of hunts. To its right, and closer, is Tom na Moine, the knoll of the moor; and, immediately behind it but formed from the same ridge as Beinn na Seilg, is the slightly pointed peak of Stacan Dubha, the high black hill. It may appear surrounded by higher peaks but the views from the summit of Stacan Dubh are well worth the steep walk across a kilometre or so of rough, boggy ground. 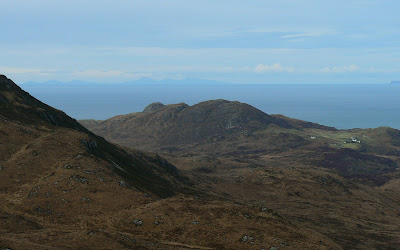 To the northwest, on a fine day, the Outer Hebrides, some forty or more miles away, are clearly visible. To the left is the dark flank of Beinn ne Seilg, in the middle is the hogsback of Beinn Buidhe, and to its right is the tiny settlement of Achosnich. 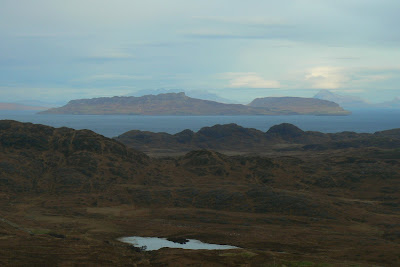 Northwards, the peak overlooks Lochan na Crannaig, the small lake of the crannog, on the far side of which can clearly be seen the promontory on which the fortified building may once have stood - see previous Diary entry here. Beyond are the two dark ridges that are part of one of the circular outcrops of Ardnaurchan's volcanic intrusion, and beyond again, the Isle of Eigg with its characteristic ridge formed of a sloping lava flow. In the distance are the Black Cuillins of Skye. The rounded mountain above the right-hand end of Eigg, with the cloud formation over it, is Beinn na Caillich. 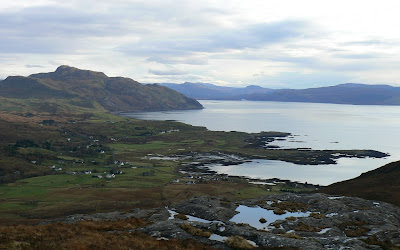 Turning to face southeast, the whole of Kilchoan village lies below, with Ben Hiant in the left distance.
A map of the area is here. From the Ormsaigbeg road the walk took us
about an hour and a half.
Posted by Jon at 09:05