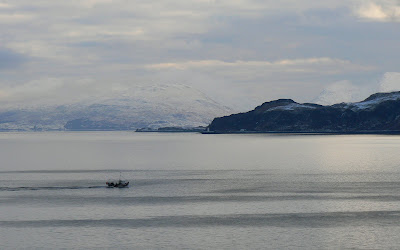 We woke to find the air temperature above freezing for the first time in days, accompanied by a thin sleet which, with the ground still well below zero, immediately froze into sheets of black ice. Roads and paths quickly became lethal underfoot.
Since then the day has remained grey, with hardly a breath of wind to disturb the Sound. Minutes before the Dawn Treader (pictured) made her way from Kilchoan across to Bloody Bay on Mull, a pod of dolphins had disturbed the surface, quite a large one judging by the fact that four or five were visible at one time. They were followed by a big otter, closer in to the Ormsaigbeg shore, making his way lazily westwards towards the cliffs of Sron Bheag. 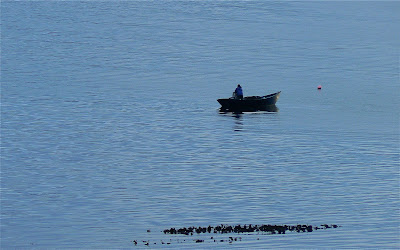 Dawn Treader wasn't the only fishing boat at sea. This is Hughie MacLachlan out in his boat off Bogha Caol Ard catching lobsters. Mission successful, he tells the Diary: he has two nice ones which will form one of the many courses of his Christmas lunch. 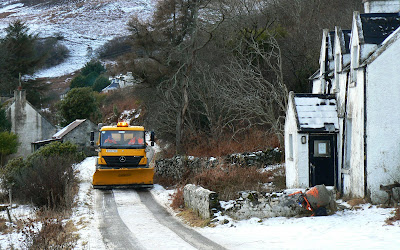 There were others working to make our Christmas a safe and enjoyable one, despite the weather. This is one of Highland Council's gritting lorries clearing the Ormsaigbeg road. This morning, the news on Scottish radio mentioned Kilchoan's roads as being some of the worst in the country. 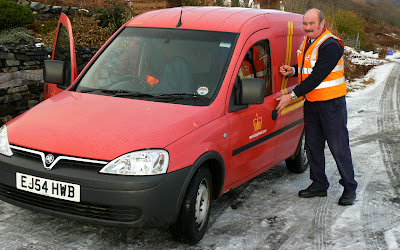 Our two posties have done a wonderful job over the last few weeks, considering the conditions. With the mail arriving late, and a huge backlog at last beginning to come through, Gillespie didn't leave the sorting office until after half past two, so he'll be very late home, delivering the last of the mail at Sanna well after dark. 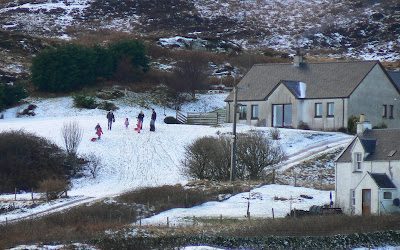 But for some the Christmas holiday has already started. With the snow re-frozen, conditions are ideal for tobogganing, and what better place than the front lawn?
Posted by Jon at 15:21