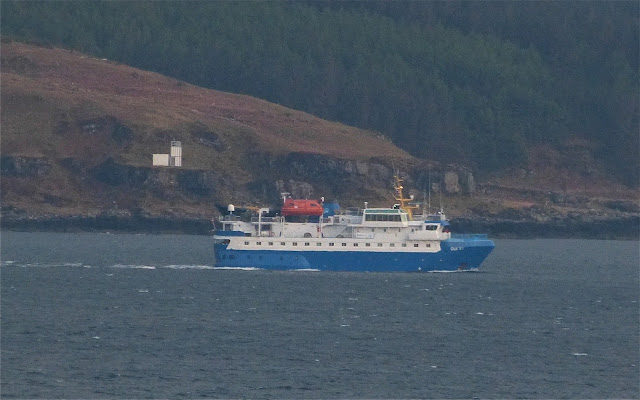 Diary followers of a nautical nature will have noticed, once again, a long break between reports of shipping movements in the Sound - for which, apologies.  There is little excuse: by this time of year the cruising season is in full swing so we have plenty of interesting ships passing us.

The first ship is the Quest, an 'expedition' ship rather than a 'cruise' ship, though that's essentially what she is.  Built in Denmark in 1992 to serve as a ferry on Greenland's coasts, she has a pedigree for going to interesting places, including such exotic ones as the Sound of Mull.  She's operated by a company called Wild Earth Travel - website here. 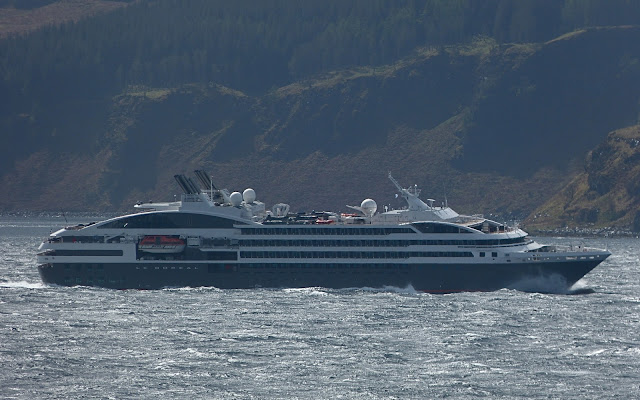 Le Boreal has featured here before.  As the name suggests, she's French but she, again, is not a crusie ship: she's a 'superb super yacht' according to her owners, the Compagnie du Ponant, who add that she is, "the fruit of the expertise of the Italian Fincantieri shipyard and French sophistication, as interpreted by designer Jean-Philippe Nuel. Le Boréal remains faithful to our philosophy - to create a unique atmosphere, a subtle blend of luxury, intimacy and well-being."  The Diary has a nasty feeling that this has been quoted on the blog before, but it's one of those descriptions which suggest it was a direct translation from a more flowery language and, probably, far too exciting for the British market. 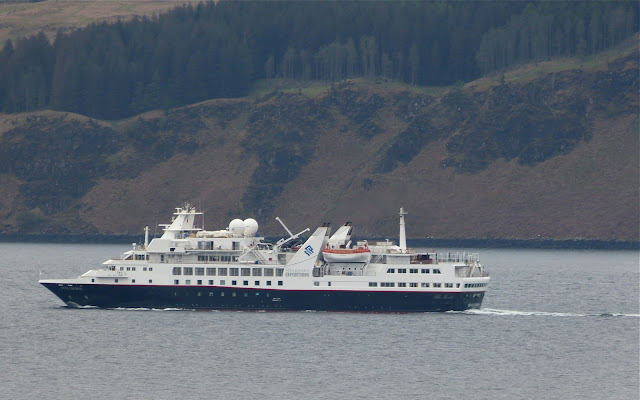 More exploration here - this is the Silver Explorer, designed, according to her operators Silversea Expeditions, "specifically for navigating waters in some of the world’s most remote destinations, including both of earth’s polar regions" and the Sound of Mull.  The last time we saw her pass through the Sound, back in May 2010, she was called the Prince Albert II.  Obviously this name wasn't exciting enough, though the new one rather suggests that she's full of grey-haired retirees. 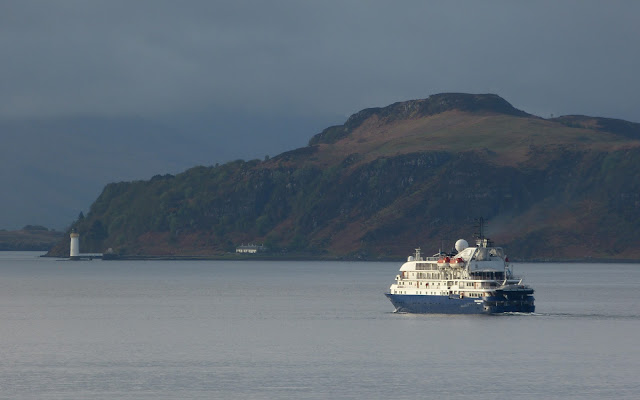 You would be forgiven for assuming that Sea Explorer was a sister ship of Silver Explorer, but you'd be wrong.  Voyages on Sea Explorer are sold by Polar Cruises.  Of this ship they say, "The distinguished Sea Explorer offers a classic yacht-like atmosphere and deluxe accommodations for expeditions to Antarctica."  The ship is also peddled - very firmly as 'our ship' - by Polar Latitudes; they say, "Sea Explorer has always been known for its effortless elegance, impeccable service and atmosphere of charm and camaraderie."  The 'always....known' suggests she's been around for many years if not centuries: she hasn't, not under that name.  Before having her name changed to something a little more... appealing.... to the adventurous, she was Noble Caledonia's Corinthian II. 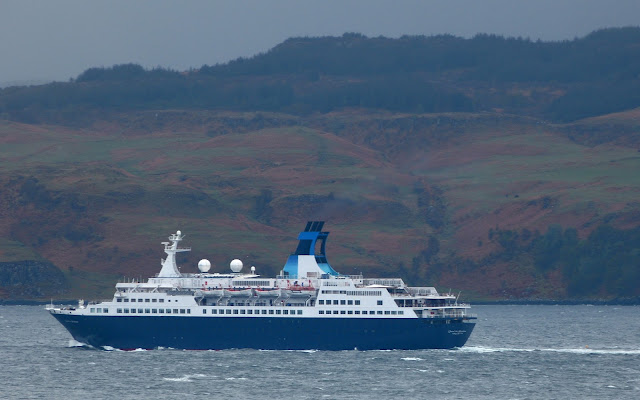 Pushing the name boundary even further out is the Quest for Adventure operated by Saga, who specialise in holidays for those of us who are of.... a slightly older vintage.  At least on their website, here, Saga don't go in for any great promises, though a scan of what they do say doesn't seem to offer anything particularly adventurous: perhaps it's the quest that's important, hoping that the adventures, if they happen, won't be too exciting. 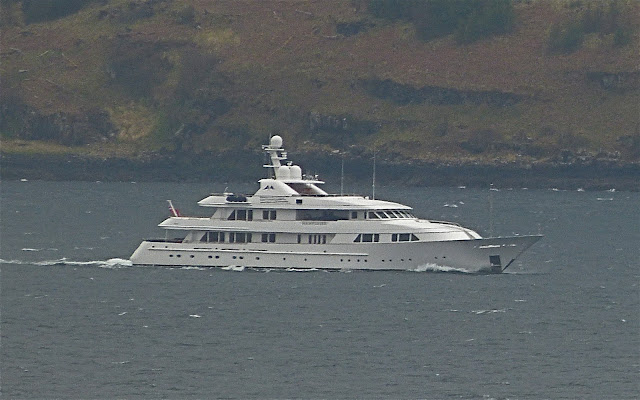 The Hampshire is exactly what she looks like - a rich man's yacht available for charter.  She's operated by a company called Edmiston whose website, here, is quite open about the sort of holiday they offer aboard, with a prominent list of 'Toys' which begins, "1 x Jet Ski, 5 x Windsurf Boards (1 x beginner, 4 x intermediate, 4 advanced), 8 x Windsurf Sails (3 x beginner, 5 x intermediate, 5 x advanced)...." 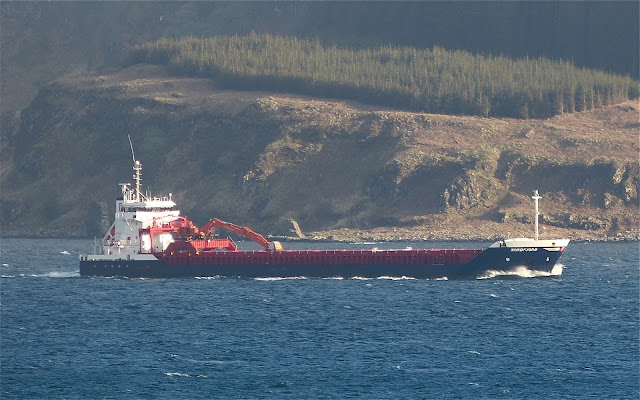 Back down to Earth now with a couple of good, solid working boats.  Nordfjord is a 100m Dutch ship of 3990 gwt, built in 2006.  She's listed on most sites as a 'general cargo ship' but she looks more like a bulk carrier which has a self-discharging capacity.  She is owned by Fonnes Shipping but she used to be the Jan van Gent.  Look at these older pictures of her and spot the differences since she was refitted. 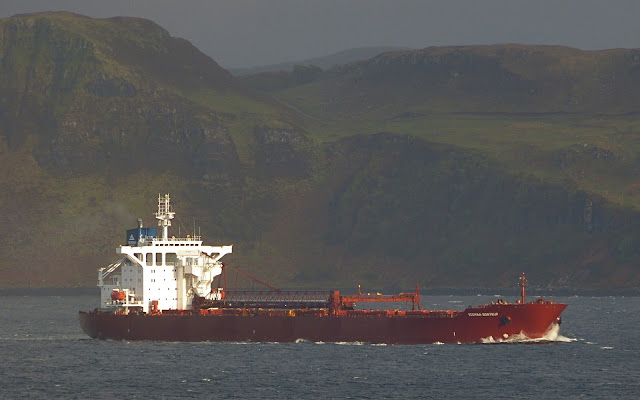 The Diary offers this picture of one of our most familiar ships, the Yeoman Bontrup carrying a full load from the Glensanda superquarry, for no other reason than she looked so good in the low evening light in her new paint job. 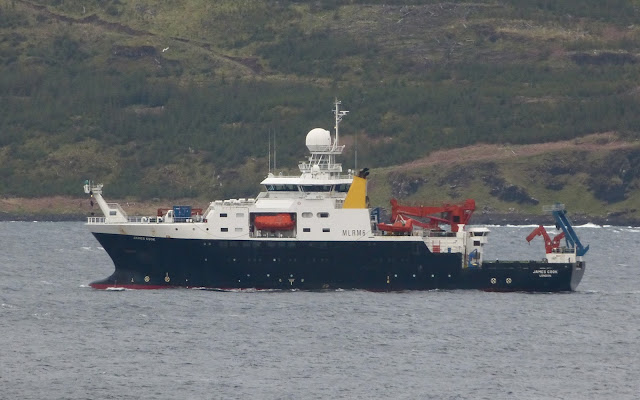 Lastly, this is the James Cook, a research ship operated by the UK's National Environmental Research Council - website here.  She spent some time pottering around at the northern end of the Sound of Mull on the 23rd May.  It's good to know that the UK still puts money into maritime research at a time when monitoring changes in the oceans are one of the keys to understanding why and to what extent the global climate is changing.
Posted by Jon at 06:00