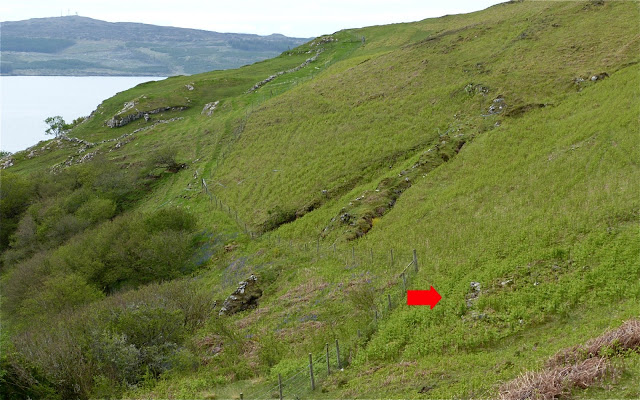 Sometimes, a change of season can be a nuisance.  On Ardnamurchan, there's definitely a good season for the amateur archaeologist, and it is NOT early summer, for the bracken is coming up at the pace of about six inches a day, obscuring the one thing which makes archaeology here so rewarding - the fact that so much of the local building was in stone.  In winter, the bracken and grass have died back, and so, so much is revealed.

We've walked the slopes above the boundary fence of the Ormsaigbeg common grazings a hundred times, yet it was only the other day that a variation the the blanket of bracken drew attention to a stony area which we hadn't noticed before - it's arrowed in the picture.  In the photo, the Ormsaigbeg croft lands lie to the left of the fence, and the site's approximate location is marked on the map here. 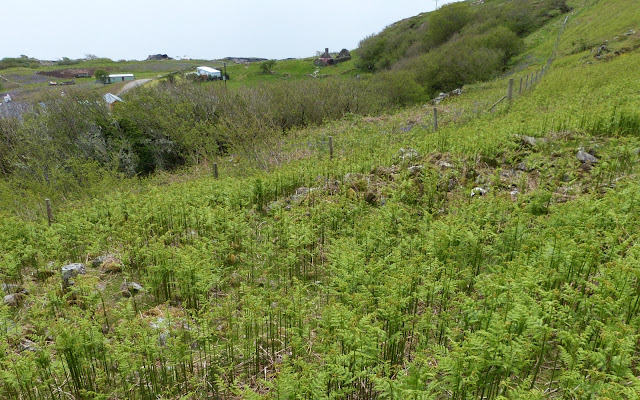 The pattern of the stones is telling a story, but even close up it's difficult to read.  It took some grubbing around in the bracken to find it.

The stones were once the walls of a house some 10 metres by 4.5, divided into two almost equal-sized rooms.  It sat in a slight platform cut into the slope, close by a little burn that provided its inhabitants with their water supply.  Around it there was a network of drystone walls, though their remains are so obscured it is difficult to see what they enclosed.  But there's enough visible to show, quite clearly, that this was a dwelling house. 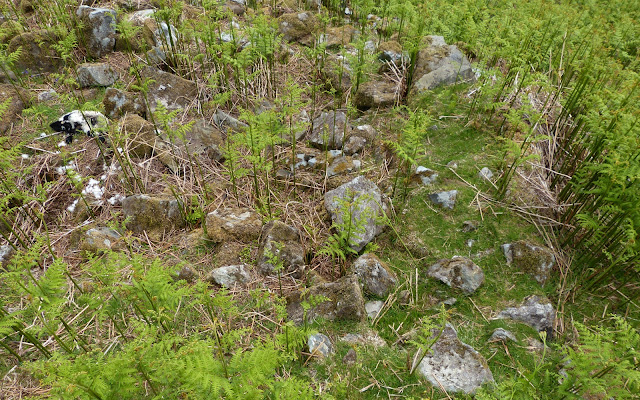 The more the site is explored, the more evident it becomes that this was a substantial building.  The wall at the western end (the right in this picture) is upward of a metre thick, and many of the rocks of which it is built have been carefully dressed.  A sad sense of the scale of this photo can be obtained from the newborn, but dead blackface lamb at upper left. 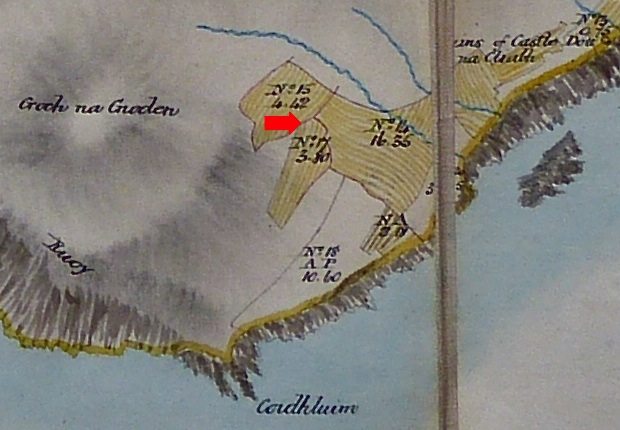 The earliest map we have which shows the farm lands of West Ardnamurchan is Bald's map of 1806.  This isn't from the original but from a copy made in 1856 and now in the care of Donald Houston at Ardnamurchan Estate.  It's a remarkably accurate map for its day, and shows that the area around the house was worked in 1806; but no buildings are marked.  At that time, the land belonged to the Ormsaigbeg clachan whose inhabitants lived in a grouping of small houses some half-mile to the northeast - see the 'History of Ormsaigbeg', here. 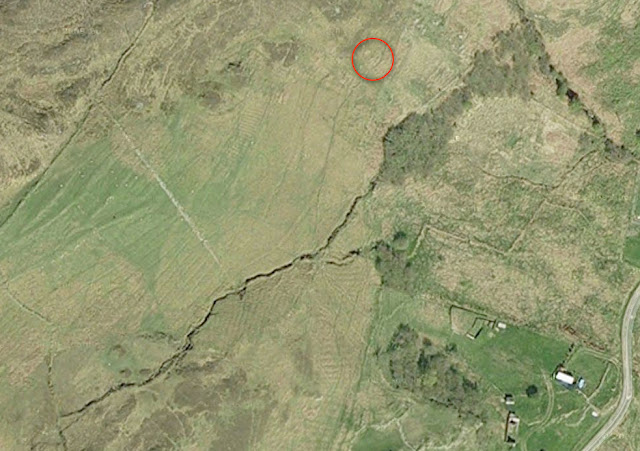 This suggest that the house may be earlier than 1806, and may date back to a time when there was a satellite village of the Ormsaigbeg clachan near the site - again, see the 'History'.

This Google satellite image shows how intensively the land was worked two hundred and more years ago - the areas of striping are lazy beds, and old walls criss-cross the area.  The approximate position of the house is marked by the circle; the road to the right is the Ormsaigbeg road. 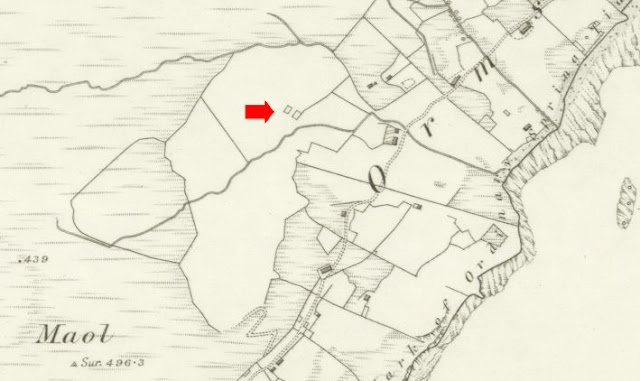 The only indication that someone has noticed this almost-lost human feature on the landscape is the inclusion, in the Ordnance Survey's 1872 1" map, of two rectangles of land enclosed, presumably, by stone walls. 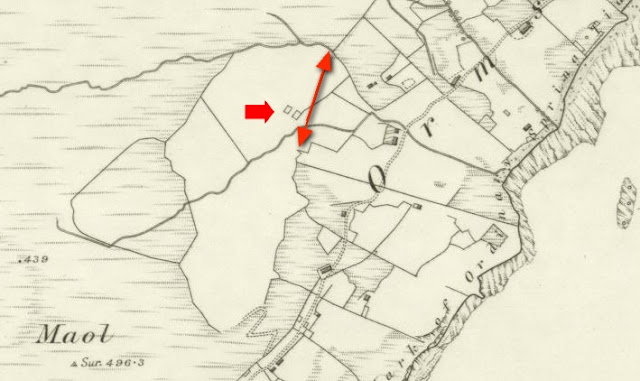 Ormsaigbeg's crofts were created in the mid 19th century, mostly to accommodate local people evicted from places like Bourblaige.  Look closely at the map and notice how the course of the wall which was built to separate crofts from common grazing is interrupted near the house - the double-ended arrow on the map shows where the wall might have gone.

So the land surrounding this building had something sufficiently special about it that, when the clachan lands of Ormsaigbeg were rearranged into individual crofts, it was excluded.  Fascinating - but any further investigation of the building will have to wait until winter.


Many thanks to Donald Houston for permission to copy the Bald map.
An interactive map of the area is here.
Posted by Jon at 12:18